Like Heavy Rain before it, Beyond: Two Souls pushes the boundaries of what a game can be. At times it’s barely a game at all. It’s more a work of interactive fiction where you can influence the direction of the narrative without really feeling in control of what is happening to your protagonists inside it.

Yet as an experience it’s both richer, more affecting and more coherent than Heavy Rain. It’s Quantic Dream’s best ‘interactive drama’ yet. Even when Beyond: Two Souls’s gameplay as such isn’t 100 per cent convincing, the storyline always pulls you on. 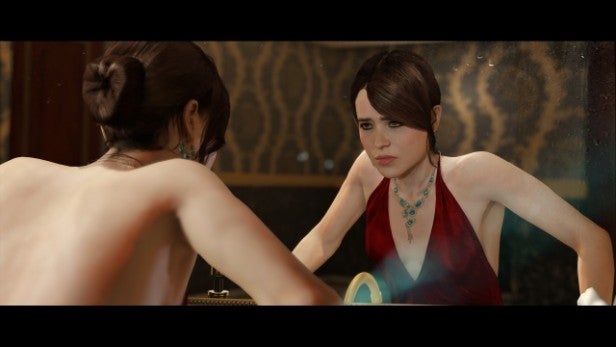 We won’t dwell too long on the plot, for the simple reason that it’s much, much better if you discover it for yourself. Beyond: Two Souls’s protagonist is Jodie Holmes, a young girl with mysterious psychic powers.

She’s linked to an unknown, unseen entity known as Aiden, who is constantly hovering around her. But Aiden is capable of venturing through walls and floors to go where she cannot, and can influence the world around him through classic poltergeist tricks and the occasional possession.

Beyond: Two Souls follows the pair through Jodie’s childhood, adolescence and early adulthood, though the scenes you play through aren’t necessarily experienced in chronological order. The more you play, the more you discover of the truth behind Jodie and Aiden, and how they got into the situation you witness during the opening of the game (no spoilers here). 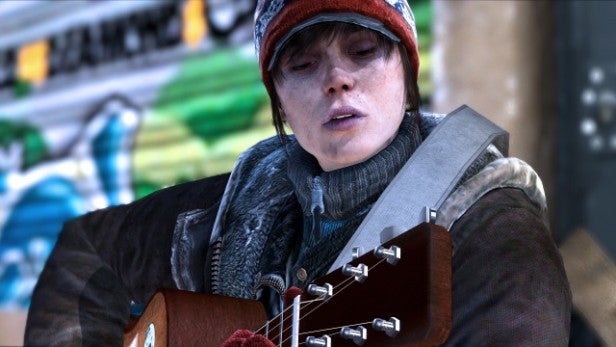 As you might already know, Beyond: Two Souls’s Jodie is played by a motion-captured Ellen Page. With the aid of some pretty dazzling graphics tech she puts in what might just be the best performance we’ve seen in a video game.

There are odd moments where you catch a glimpse of the old uncanny valley, but everything from the close-ups to the walking animations seems to have been captured with a fierce eye for every nuance, every detail.

The result is a heroine you can root for, some really heart-wrenching moments, and a story you can believe in. The same goes for a fine supporting turn from Willem Dafoe, and the vast majority of other characters. We won’t say that people watching you playing Beyond: Two Souls will be convinced they’re watching a Hollywood movie, but on a dramatic level Beyond: Two Souls works incredibly well. 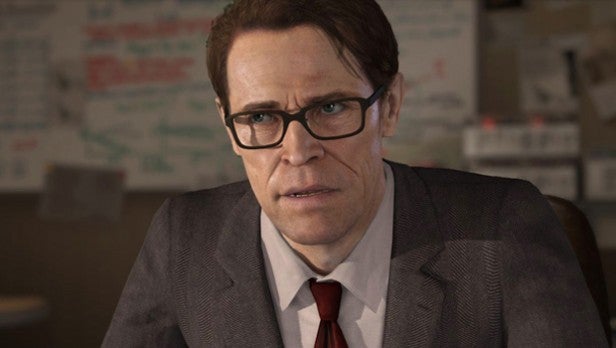 We weren’t always quite so convinced by Beyond: Two Souls’s gameplay, at least to start with. Strip away the drama, and Beyond: Two Souls can sometimes feel like a stream of quick-time event sequences. It’s a series of dramatic scenes and action sequences, but the former don’t give you an awful lot of room to explore, while the latter veer dangerously close to Dragon’s Lair timed button tapping territory at times.

On the screen you can see Jodie racing through the woods, jumping logs and ducking branches, but on the controller you’re just whacking a thumbstick up, down, left and right when prompted, while occasionally hammering the face buttons.

The prompts have been minimised, with some clever use of slow-motion to help you anticipate movement and react, but there’s still an odd feeling of disconnection between what you’re watching and what you’re actually doing – as if the game weren’t really bothered if you were there at all. 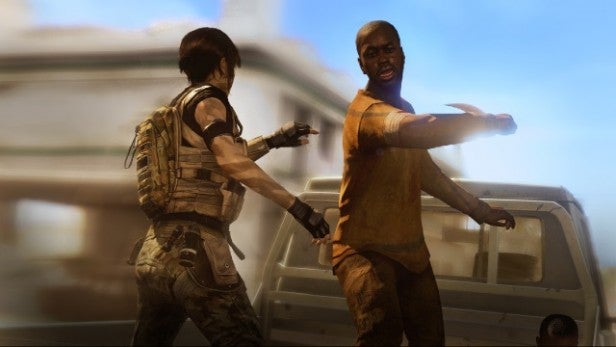 However, this feeling fades the more time you spend in the game, particularly as, mid-way through, the scenes open out, giving you more to do, more to investigate, and even some light stealth and combat. Most importantly, Beyond: Two Souls has Aiden.

At most points in the game a single tap of the triangle button switches control to your invisible friend, and you can float around within range of Jodie, affecting the specific objects you’re allowed to affect.

Aiden can push or smash them to cause a distraction or move an obstacle from Jodie’s path, or he can physically affect certain people highlighted in red, sometimes possessing them so that they’ll act in Jodie’s interest, sometimes strangling them with a nasty-looking death grip.

The best scenes in Beyond: Two Souls, gameplay-wise, are those that let you switch between Jodie and Aiden at will, transforming each scene into a puzzle that the two working together can solve. Or an action sequence where quick-thinking will get you out of danger (though the game seems even more forgiving than Heavy Rain of fatal errors – your path might change, but you won’t see the Game Over screen).

The best scenes drama-wise are often the quietest – a heartbreaking farewell, a moment of kindness – or the most tense, as in some knuckle-whitening spots of espionage. Throughout, Page’s performance is key, glossing over occasional bumps in the script to keep you rooting for Jodie, all the way. 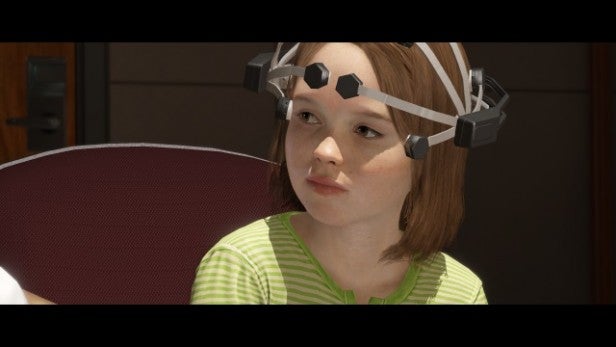 If there’s any frustration it’s not in the difficulty level, but in the lack of what you might call agency. Where a game like Dishonored or Bioshock: Infinite is all about giving you a range of tools and a range of opportunities to craft your own solution, Beyond: Two Souls only makes a few elements in the scene truly interactive, leaving you thinking you could try a different approach if only the game would let you.

Even Aiden seems oddly limited in what he can and cannot tamper with. In a way, this doesn’t matter. Beyond is a different type of game, and more about how your choices affect Jodie and her story than experimenting with the scenery.

These choices really do matter, too. You decide whether to let a slight go or take revenge. You can choose to be truthful or evasive, and whether or not to let people get close. All these choices can and will add up in Beyond: Two Souls. Yet you can’t help thinking that this would be an even stronger interactive fiction if you were allowed to write a little more of it yourself.

It also has to be said that Beyond:two Souls’s attempt to implement two-player action doesn’t really hold together. One player can play Jodie while another controls Aiden, but as you still have to switch between the two this means that one player is always sitting waiting. 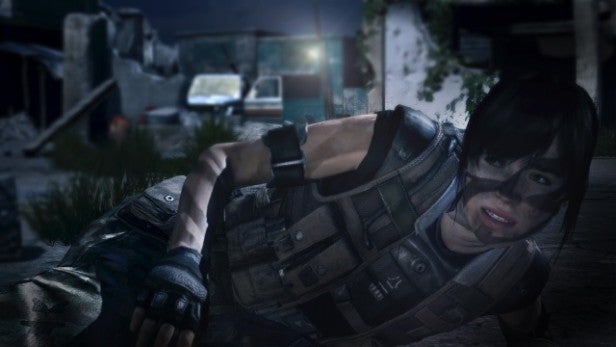 Still, these minor issues are part and parcel of the way David Cage and Quantic Dream are pushing against the limitations of their medium and technology, and endeavouring to do something new. It’s a stunning technical achievement in terms of graphics and animation, but also a real artistic triumph, with writing, art direction, lighting, sound and music that wouldn’t disgrace most films.

Beyond isn’t perfect just as Heavy Rain wasn’t perfect before it, but in some ways it’s struggling with the same question as Bioshock: Infinite and The Last of Us have this year: how do you push gaming as a storytelling medium and still cram in all the stuff that makes it a game? Sometimes it’s a question that Beyond fails to answer, but we can let that go when the storytelling works so well.

Check out our round-up of the best games to buy

With great performances from Page and Dafoe and technology and artistry to match from Quantic Dream, Beyond: Two Souls is another big step for cinematic gaming. At times it might be a step too far, constraining the gaming elements so that the player doesn’t quite feel in control, but there’s more than enough compensation in the strong story, great characters and interesting situations. Beyond: Two Souls isn’t always a game you feel you have to play, but as an experience it’s practically unmissable.