We’ll cut to the chase. With The Last of Us, Naughty Dog has created a late PlayStation 3 classic to equal Uncharted 2 and 3; a story-led action adventure that delivers on all technical, narrative and gameplay fronts, though sometimes less upfront about pushing the console hardware to its limits. Funnily enough, it’s also a reaction to Uncharted. Where Uncharted looked to the Hollywood blockbuster for inspiration, glibly mixing drama, romance and violence, there’s nothing glib about The Last of Us. It’s a dark and brutal game – even more so than, say, this year’s Tomb Raider reboot. There’s something hard and uncompromising in its world and in its combat that says “this is still entertainment, but stop, think twice about what you’re doing. How does it feel?”

Watch The Last of Us launch trailer:

The Last of Us: Hello Cruel World

The world it presents is ours, but twenty years after a disease has infected the majority of the world’s human population, transforming them into weird fungal mutants who feast on human flesh. Those of us who remain live in barricaded cities controlled by totalitarian government forces and scratching a living however we can. Joel, the game’s hero, has become a gunrunner and drug smuggler, sometimes working with a resistance group, the fireflies, yet not in any way allied to their cause. While taking vengeance on a duplicitous criminal gang leader, Joel and his partner, Tess, become embroiled in a plan to get a young girl, Ellie, out of the city. The story tracks what happens on the way out, and then what happens when it all goes wrong.

It’s not hard to spot the big-screen and small-screen inspirations – in terms of content and tone this is The Road meets The Walking Dead meets 28 Days Later and 28 Weeks Later and Day of the Dead, with touches of Children of Men and Stalker. Gameplay-wise, there are elements of Uncharted in small sections of platforming or the third-person gunplay, but The Last of Us owes just as much to stealth and survival horror as the action game. 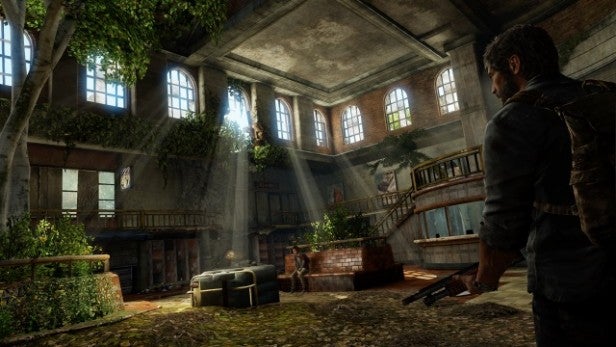 The Last of Us: The Breakdown

Looking at it coldly, you could break the whole game down into chunks or encounters. Joel and his current companions have to get from A to B, and there are infected or human aggressors in their way. You can try and sneak past them, crouching behind cover and flitting from one obstruction to another, or you can try and shoot it out with pistol, rifle, bow and shotgun. You can sneak up behind your enemies and take them down one-by-one with a stranglehold or shiv, or you can try setting traps to overpower them.

Frequently Plan A breaks down into Plan B before all plans go out of the window, in which case you’ll be manically attempting some mix of all of the above. Eventually you either work through the encounter or die and start again. 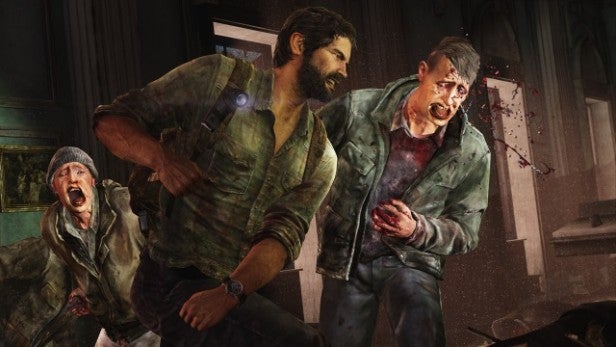 Naughty Dog skilfully breaks up this basic template by varying the enemies and the situations, and by giving you such a rich set of tools to do your work with. Stealth, ranged and melee weapons all play their part, and some need to be crafted or upgraded using scavenged supplies. Some crafting can be done in the field, while more serious weapons upgrades need a workbench. Meanwhile you’ll be battling through part-flooded wastelands, the graveyards and backyards of deserted small-town America and the grim urban hideouts of the most degenerate survivors. It’s no picnic, unless you like the smell of decay and the taste of rust and blood.

Cleverly, the need to scavenge adds a nice risk/reward structure to the mix. While each chapter is actually quite linear, there are always buildings and outhouses to explore. Doing so always nets you more supplies, but it also raises the threat of attack. Meanwhile, there are minor puzzles to solve, usually involving shifting planks to cross rooftops or skips to reach high ledges, though with things sometimes complicated by threats in the immediate vicinity. 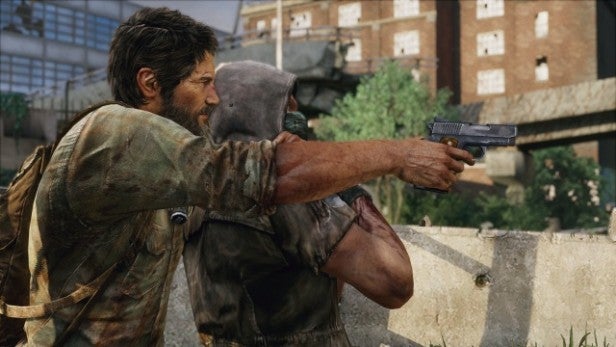 The Last of Us: Seamless Stealth, Action and Survival

The important thing is that all these elements work seamlessly. The stealth controls are simple, intuitive and predictable. Surprise attacks and grabbing moves come naturally at the tap of a button. Holding the R2 button makes Joel listen, darkening the area and highlighting the position of approaching enemies. Crafting and healing work slowly enough to make you avoid doing either in the heat of combat, but fast enough that you can break away from enemies with a quick sprint, then pop into a corner and get yourself patched up or your baseball bat more deadly.

The third-person aiming and shooting works as well as it does in Uncharted, but with a more realistic approach to targeting, fire-rates and reloading. In Uncharted you can spray machine-gun fire around with near-impunity. In The Last of Us, you wince when a headshot fails to hit home. And while Infected enemies play fairly dumb, becoming most dangerous when you panic or they emerge in numbers, human enemies are a little bit smarter. We’ve had moments of farce chasing government troops around the furniture, but also moments where we’ve been outflanked, outsmarted and outgunned. 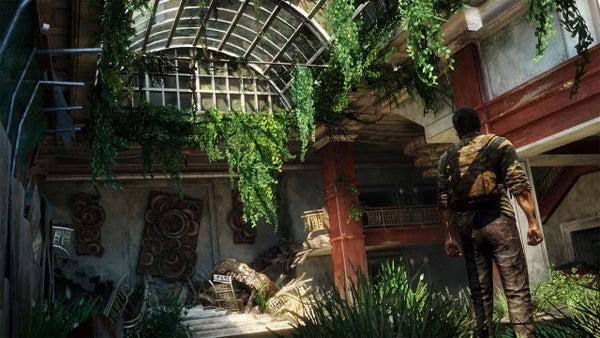 The Last of Us: Plot and Character

All of this is great but not necessarily the makings of a classic. What makes The Last of Us more than just a good game is its storytelling and atmosphere. It helps that there’s a real depth to the characters, and it’s the kind of depth that comes from the performance and the dialogue, not some trail of background info that’s supposed to make you understand them.

“Show, don’t tell” is the old Hollywood maxim, and The Last of Us follows it most of the way, with Joel’s world weary attitude evident in every word and animation, and his teenage charge Ellie’s youthful spirit just the same. The game then throws them into situations that don’t just test your skills as a player, but reveal new aspects of their characters. In the end you care not because you’re constantly being told you have to care, but because you’ve got to know and like these people. 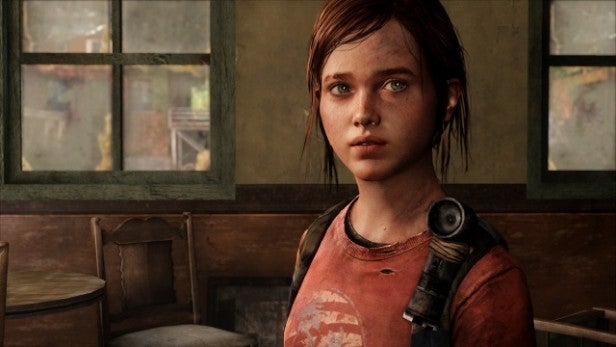 Tess, Ellie and the other CPU-controlled characters also play a vital part. On one level they provide effective and sometimes unpredictable support, throwing you ammo or coming to the rescue when you’re swamped, but they also fill the game’s deliberately sparse soundtrack with life, with natural-sounding dialogue that takes you further into the story while the action is still progressing. There are cut-scenes, but where possible the game works hard not to stall its flow.

The Last of Us: Graphics, Sound and Atmosphere

The graphics, meanwhile, are consistently fantastic, with some of the most detailed characters, monsters and environments we’ve seen on PS3, and stunning lighting that’s employed with a real eye for the fine art of cinematography. Outside of the city it’s a lush and verdant kind of apocalypse, with nature running rampant in the midst of urban decay, and some of the vistas are plain beautiful. Familiar settings – office blocks, apartments, backyards, high-street stores, a suburban school – are twisted into locations for frantic fights to survive against Infected and the most feral human foes. The juxtaposition of the normal and abnormal is just as effective here as in The Road or The Walking Dead. 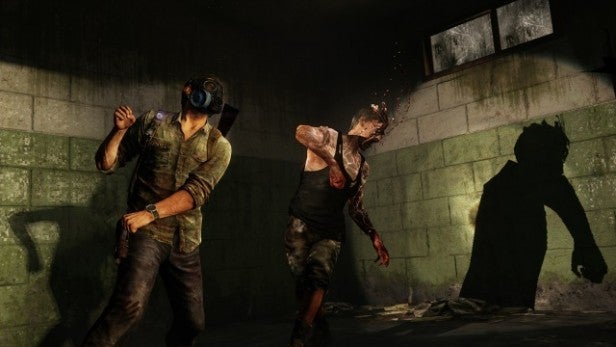 Most of all, The Last of Us thrives on its atmosphere. It’s hard to call it scary in the sense of a Resident Evil or Dead Space 1 and 2, but it’s horrifically tense, knotting your guts as Joel senses Infected around the corner or you’re trapped with homicidal survivors all around. You soon learn the different types of Infected, and come to fear the blind but unstoppable Clickers and the hideous, over-powered Bloaters, and some of the human opposition aren’t any more lovable. The violence when it comes is fast, brutal and surprisingly graphic, but rarely cheap. It’s the kind of violence that makes you want to turn your head away, though as much is suggested as actually shown. 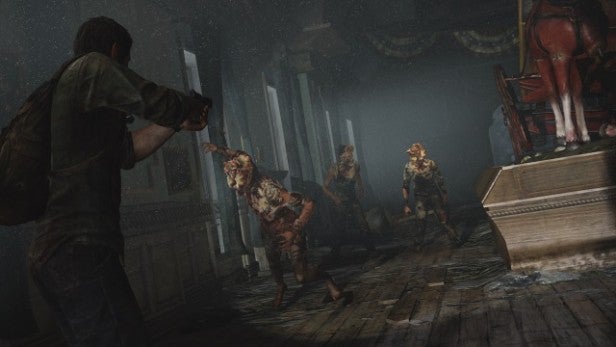 As always, it’s the soundtrack that does much of the heavy lifting. The score, deliberately stripped-back and heavy on washes of synth and finger-plucked acoustic guitar, is by turns dark and unnerving, then oddly warm. The use of effects is equally focused, meaning events have real impact when they need to.

It’s easy to deconstruct The Last of Us, look at all the individual elements and say that it’s not doing anything that new or that special. You can moan that it’s linear, that it denies players real choice and that some of the means used to prevent you leaving the current bubble are clearly artificial. Yet when you’re playing it, none of this matters. What matters is Joel and Ellie, getting them to their destination, and taking this rich story to its end. The Last of Us might not be the most stunningly original or mind-blowing game you’ll play this year, but it’s an intelligent, polished and grimly satisfying work of gaming art.