A simple gaming monitor that offers a solid performance and plenty of features. Fans of the flashy should look elsewhere though, while you can find more vibrant displays at a lower price

What is the ViewSonic XG240R?

The ViewSonic XG240R is a budget gaming monitor, offering premium features, including a 144Hz refresh rate, AMD’s FreeSync technology and a 1ms response time at an affordable price.

RGB lighting also gives the XG240R a flash of personality, and can even be synced up with gaming peripherals for a stunning harmony. Chuck in a few gaming-focused colour profiles as well as 22 customisable levels of black stabilisation controls, and ViewSonic’s monitor seemingly ticks every criterion for a gaming setup.

Let’s not forget the most important thing here though: the display. While there’s no denying the ViewSonic XG240R is feature packed, there’s a concern that the screen quality has been sacrificed in order to achieve such a wallet-happy price.

Faced straight on, the 24-inch ViewSonic XG240R looks bland. This gaming monitor would easily blend in at a school library with its chunky bezel and the boring black design. The ViewSonic XG240R feels just as budget as it looks too, with its cheap plastic case. 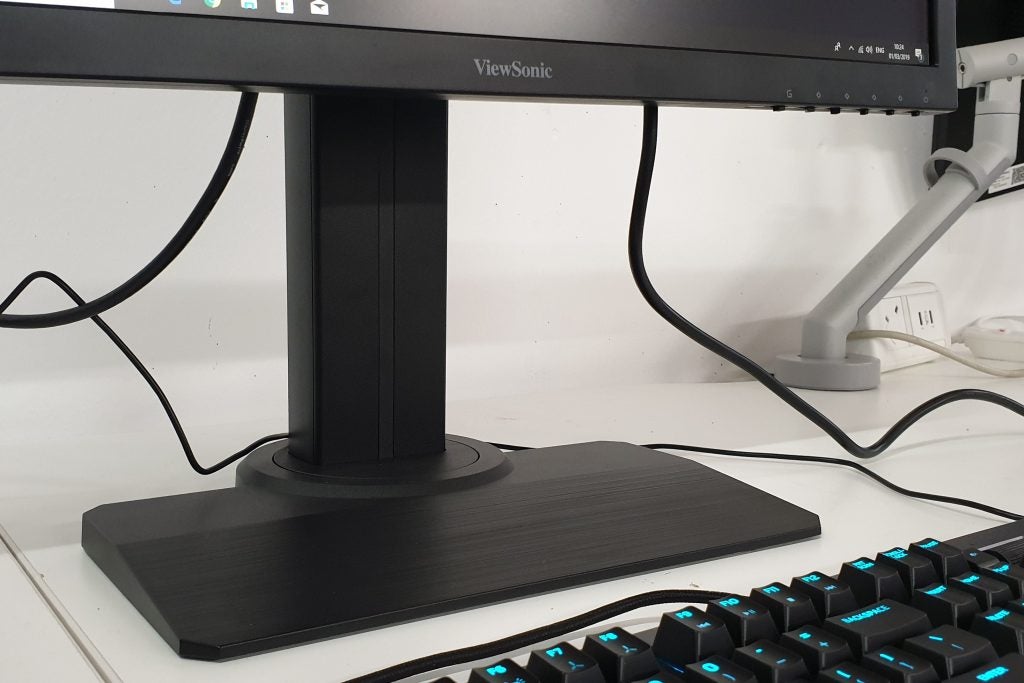 The ViewSonic XG240R’s stand is fully adjustable, so you can even spin the monitor into an upright position if you fancy

It’s the same story for the stand, using the same boring design as the rest of the monitor. ViewSonic could have easily added some extra flair, even with something as simple as a red streak as on the company’s XG2401. But no, ViewSonic has done everything it possibly can to hammer down the price, including using a TN panel.

But while the ViewSonic XG240R is not a treat for the eyes, it’s at least practical. It’s extremely easy to twist, turn, push and pull the monitor into whatever position you feel most comfortable, and then lock into place so it doesn’t start tilting during your heated battles. 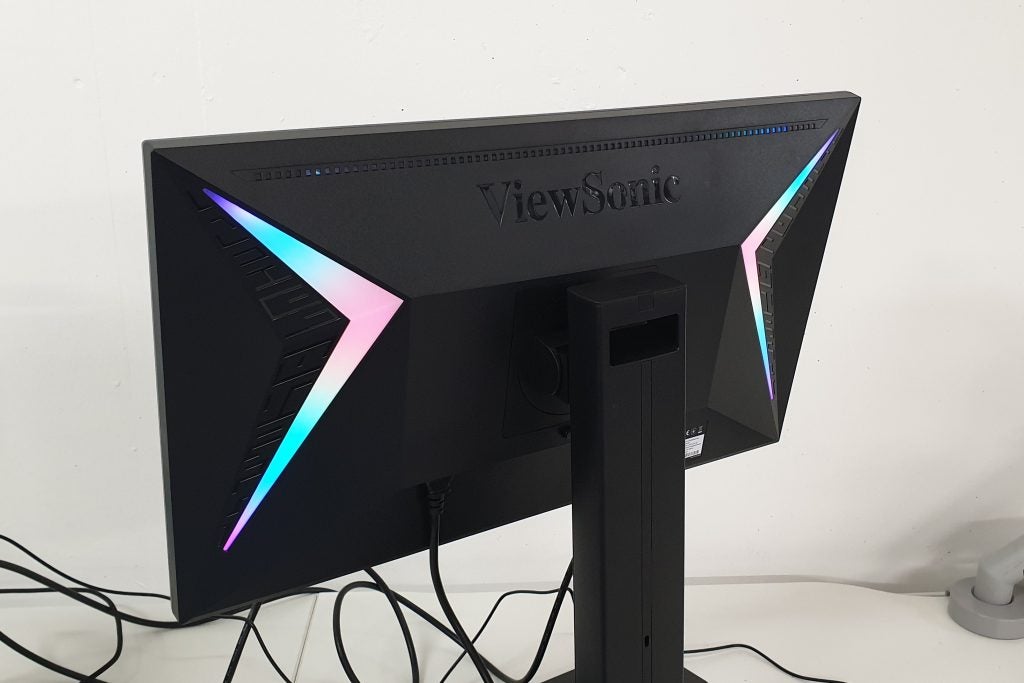 The RGB panels are gorgeous, so it’s a big shame they’re hidden away on the rear

Fortunately, things look a lot better on the rear. Two arrowhead panels can be found at the back and glow a rainbow assortment of colours thanks to the RGB lighting. The shifting colours really are mesmerising, which only makes it more disappointing that they’re facing away from you. When ogling the monitor, you only really see the benefit of the RGB lighting if you’re sitting near a wall in complete darkness. And even then, it’s not a particularly dazzling effect.

The ViewSonic XG240R has a generous supply of ports, with one DisplayPort and two HDMI for display output. There’s no DVI here, which may upset those clinging to the past, but that’s unlikely to be anyone with a setup built for gaming. 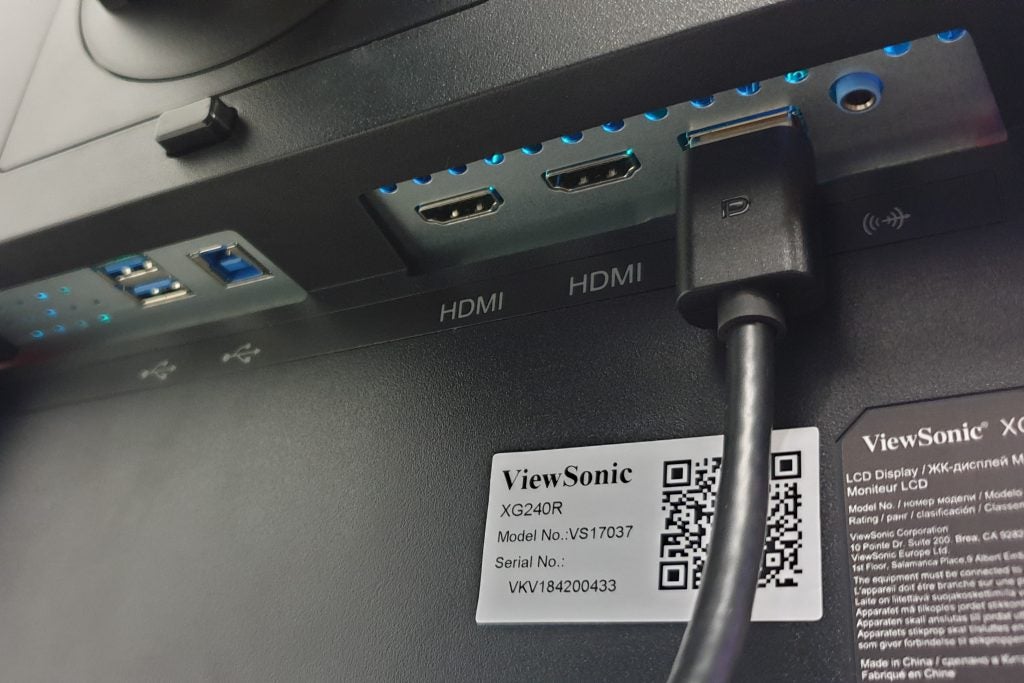 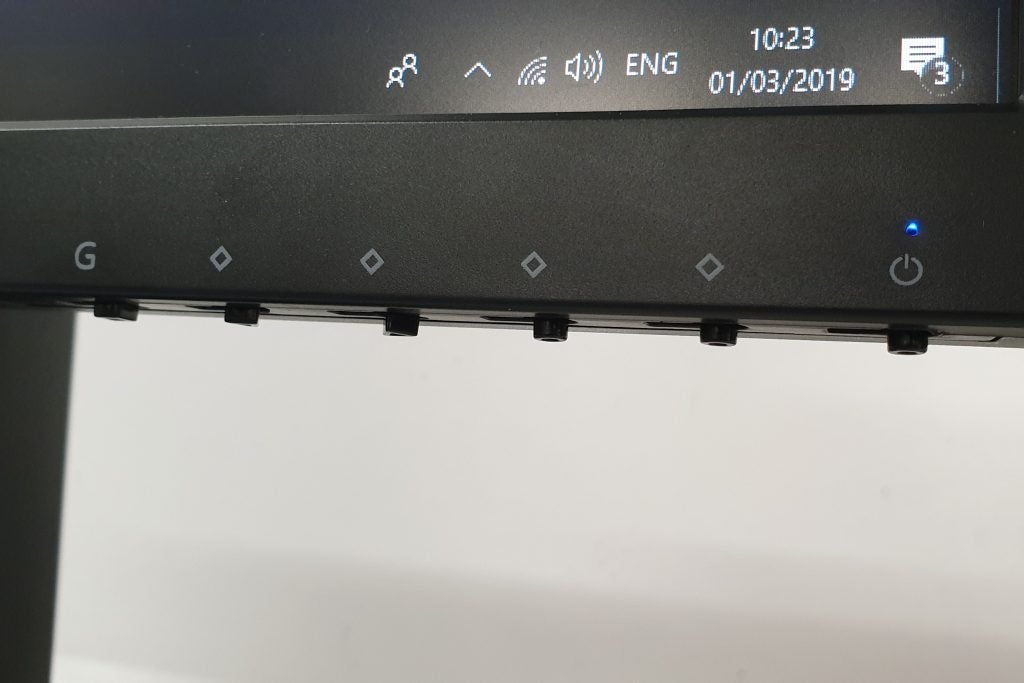 Underneath the monitor’s chin, you’ll find six physical buttons: one for power and rest to navigate through the settings. I appreciate the use of buttons instead of a touch-sensitive panel, which I find highly frustrating with other monitors. That said, the ViewSonic XG240R’s buttons aren’t clearly labelled (asides from the power button and game presets shortcut) and so it can be a right faff changing settings until you’ve memorised all the controls or activated the on-screen signposts.

On paper, the ViewSonic XG240R’s 24-inch Full HD TN panel looks like a solid display. Its sRGB colour gamut coverage score of 94.9% is impressively high, so you get a punchy display accurate enough to engage in some digital design work in-between rounds of Apex Legends.

And while the Adobe RGB and DCI-P3 results are low enough at 68.2% and 70.8% respectively to dissuade photographers and videographers, it’s no big surprise since this monitor prioritises gaming above all else. 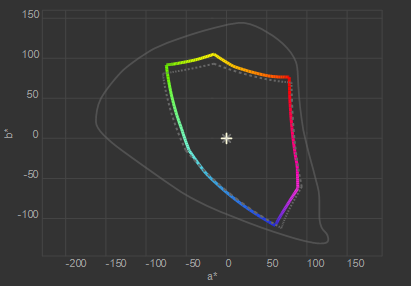 With a colour temperature of 6437K, it’s also super-close to replicating a natural tone, edging ever so slightly into warmish territories – but you probably won’t notice by simply looking. The ViewSonic XG240R also has a respectable max brightness of 364 nits.

Don’t expect the ViewSonic XG240R to excel in dark scenes though, being only capable of black levels of 0.33 nits, which is just below the standard you’d expect from today’s monitors. Contrast is decent at 1122:1, so you should at least notice a sizeable difference between the brightest whites and darkest blacks.

DisplayCAL revealed that the ViewSonic XG240R gave an average Delta-E score of 4.93, and a maximum colour difference of 8.63. Delta-E measures colour accuracy, and scores of 1 are regarded as the smallest level of colour difference the human eye can perceive between two colours (though it’s possible to get scores below 1). Anything scoring around 1-2 means colour accuracy is high, while scores in the 5-10 ballpark means colour difference is noticeable at a glance. This tallies with our general observation of colours looking unnatural in places on the ViewSonic XG240R.

While the passes most colorimeter tests, it’s not such a pretty picture in reality. Despite offering a Full HD resolution, I noticed detail was lacking with in-game objects appearing a little fuzzy and pixelated. What’s more, viewing angles are poor with whites appearing yellow when viewed from the side.

The uniformity of the display is well below par too, with the two bottom corners of the screen suffering significantly from degrading image quality. This is often the case with budget monitors, but that doesn’t make it any more acceptable.

Monitors generally have terrible audio quality, so I didn’t have high expectations for the ViewSonic XG240R in this department. That said, I still came away disappointed.

The lack of volume is the most striking flaw here, with the monitor’s speakers refusing to crank up to a decibel that makes dialogue easily audible. On top of this, the audio’s poor detail and clarity are immediately noticeable, even to those whose ears have not been finely tuned.

How’s the bass? It’s predictably bad, with the earth-shuddering booms and bangs in Battlefield 5 sounding subdued and muffled. If you do intend on buying the ViewSonic XG240R, it’s almost essential you bundle your purchase with some external speakers or gaming headphones, as the monitor’s audio quality will only diminish your gaming experience.

The ViewSonic XG240R merits its title as a gaming monitor with its long list of features. First up is the 144Hz refresh rate, offering a super-smooth performance when your GPU’s pumping out high frame rates. This is a really important feature if you’ve got a powerful GPU, otherwise you’ll likely suffer the likes of screen tear on a regular basis. 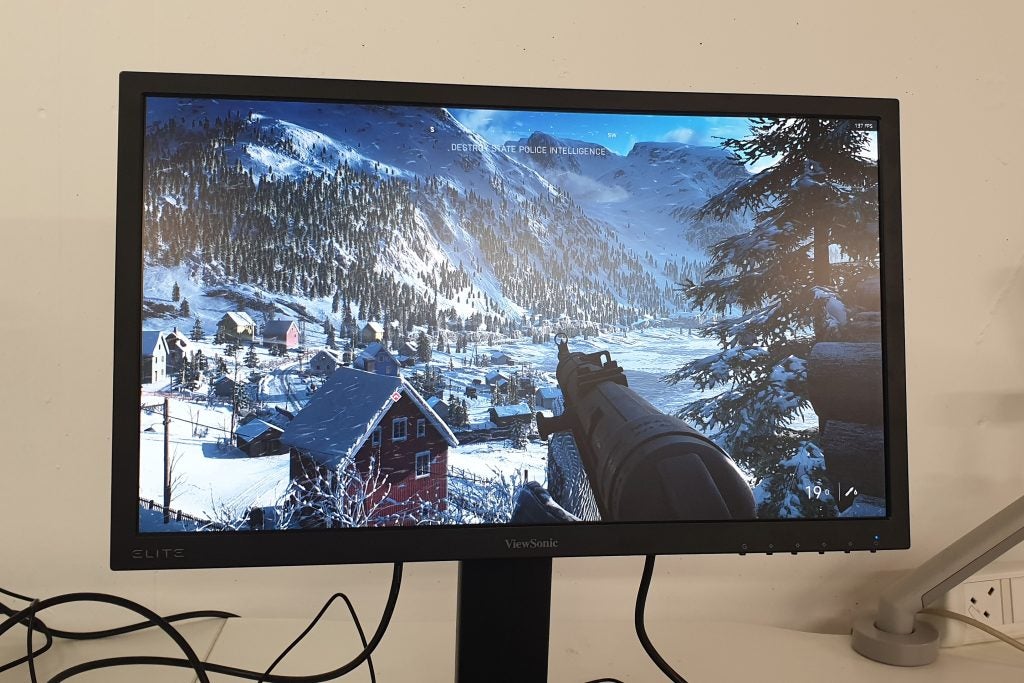 Looking front-on the ViewSonic XG240R looks punchy and crisp, although the blue in the sky looks unnaturally bright

Speaking of screen tear, the ViewSonic XG240R has AMD’s FreeSync technology, which is purpose-made to prevent this ugly visual artifact. Unfortunately, this feature will only work with AMD graphics cards, despite Nvidia recently releasing a patch that enabled FreeSync compatibility with Nvidia GPUs. It seems this patch has only worked with selected FreeSync monitors, and so far, the ViewSonic XG240R has failed to make that privileged list.

Rounding off the gaming features is ViewSonic’s claimed 1ms response time, boasting seriously low input lag. Unfortunately, I’ve been unable to test whether this is an accurate figure, as we currently don’t have the required gear in the office. As soon as we do, I’ll be sure to update this review with my findings. 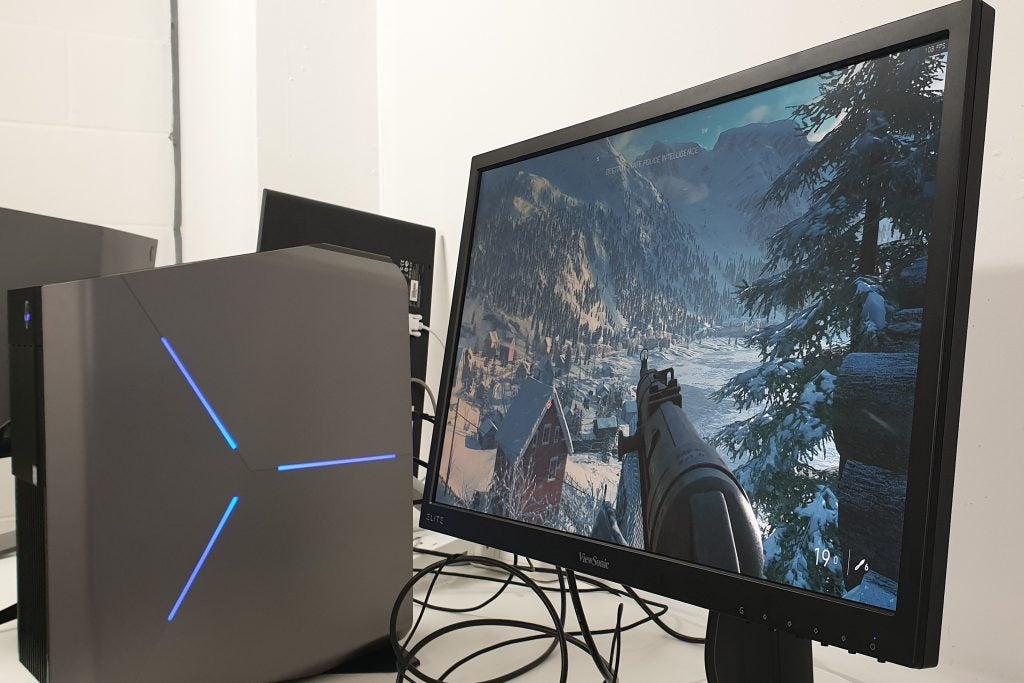 Viewed from an angle, colours suddenly looked washed out and dull. This emphasises the poor quality of the viewing angles

Overall then, the ViewSonic XG240R offers a fab gaming performance if you’ve got an AMD graphics card and fancy gaming at a Full HD resolution. There are of course many other monitors that offer these features, but not a huge number at such an affordable price.

Why buy the ViewSonic XG240R?

The ViewSonic XG240R is marketed at the low end of the market for those who refuse to pay over £300 for a monitor. It’s kitted out with all the features you’d want from a gaming-focused device including a super-fast 144Hz refresh rate, AMD’s FreeSync technology and dozens of colour profiles.

However, the ViewSonic XG240R isn’t quite the bargain it first seems. The display is solid yet underwhelming while the design is so boringly plain that only the rear RGB lights give any indication this monitor is purpose-built for gaming. 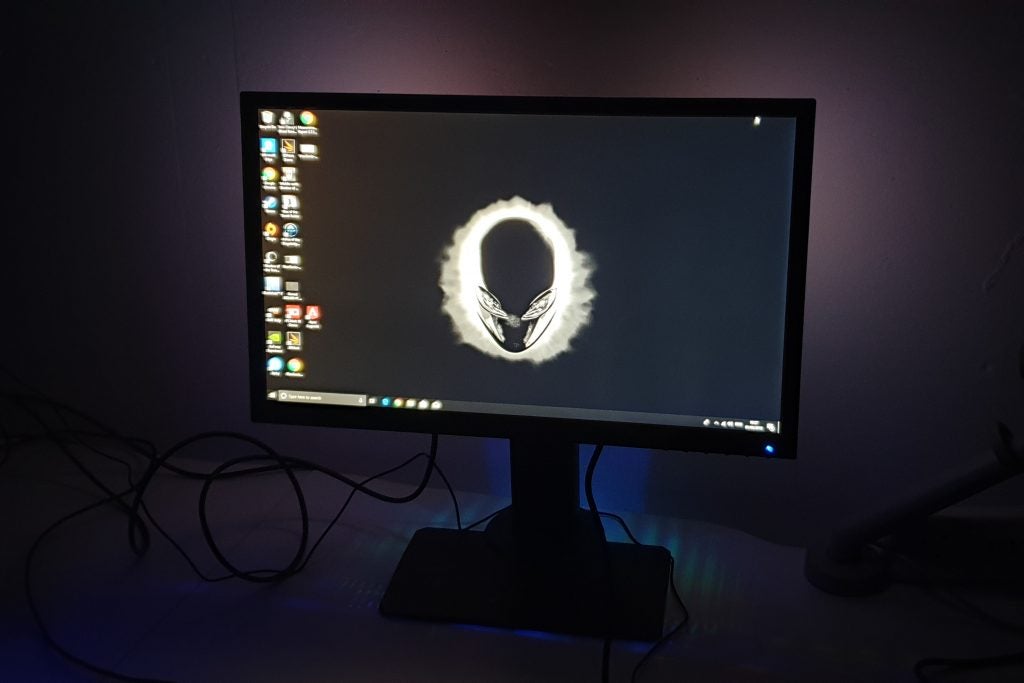 The RGB lights are visible reflected upon the wall, but they don’t look as dazzling as the likes of Philip’s Ambilight

Plus, despite being cheaper than your average gaming monitor, I still feel it’s overpriced at £282. There are better options in our best gaming monitors list available at a lower price that offer a similar gaming performance, but with a more impressive display and design. With that in mind, I’d only recommend the ViewSonic XG240R if you really dig that barebones-basic look.

A simple gaming monitor that offers a solid performance and plenty of features. Fans of the flashy should look elsewhere though, while you can find more vibrant displays at a lower price