The high-end of the gaming monitor market may get all the headlines, but if your budget is a little tighter, a no-frills, 24-inch, 1080p, 144Hz model is the way to go. The Viewsonic XG2401 is just such a model and it can be had for well under £300.

It’s not actually the cheapest 144Hz monitor you can get but here you also get AMD FreeSync and good overall image quality, right out the box.

At this end of the monitor market there are few truly stylish-looking gaming monitors. The Asus MG248Q is the best looking of the lot but it costs over £300. As such, this Viewsonic’s slightly underwhelming design is pretty much par for the course.

The bezel round the screen isn’t particularly thin or low-profile, the red highlights are rather tacked on and the overall shape isn’t particularly interesting. It’s pretty much exactly what you’d imagine a monitor to look like, with no surprises. 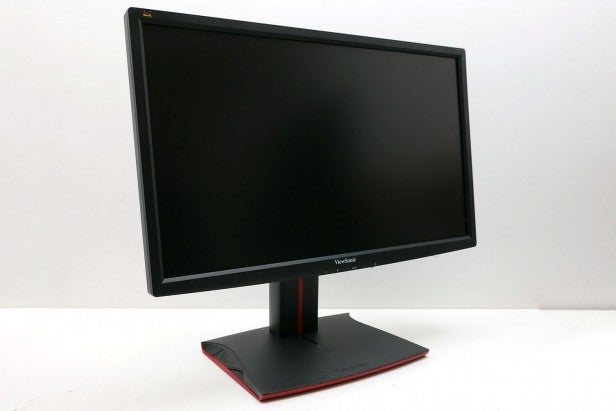 Instead, this display is all about its features, of which there are plenty. For a start, the stand offers a full range of adjustments, with height, tilt and rotation all on offer, while the panel can also be spun into portraid mode, and the stand removed and any 100x100mm VESA mount used instead.

The rotation is a fairly crude system whereby the base has a spinning plastic turntable on the bottom that allows the whole display to spin, rather than there being a proper rotating joint between the stand and the base, but it does the job. It just means you’ll need extra space on your desk if you rotate the monitor frequently, as the base has a bigger surface area when being moved.

You also get a decent, if not exactly copious, number of connections. For video inputs you get a DisplayPort and two HDMI, plus there’s a USB 3.0 hub with two outputs. The power supply is also internal – so no power brick – there are built-in 2W speakers and a headphone jack. 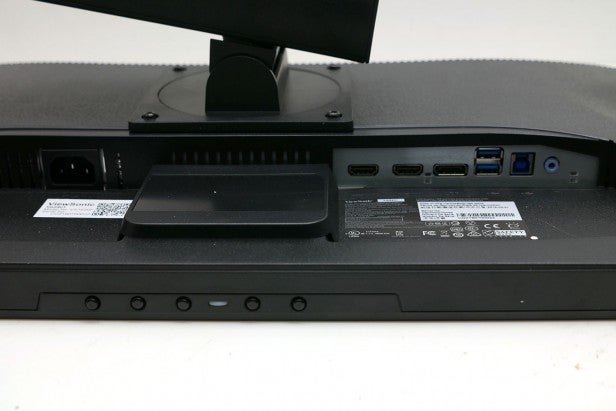 All the connections are round the back, so aren’t quite as convenient as some monitors that have some USB and audio connections on the side, but it’s easy enough to reach them by tipping the display into portrait mode.

As for the LCD panel’s features, it can refresh at up to 144Hz and has a 1ms response time, plus it works with FreeSync all the way up to 144Hz. For gamers with AMD graphics cards, it’s potentially an ideal partner.

A disappointing aspect of this display’s design is the positioning of the onscreen display (OSD) controls. The five buttons sit on the underside of the bottom bezel, which has led Viewsonic to make the bezel even thicker than the others and add ugly white labelling to it. It’s a bit crude.

However, the buttons work well enough and the OSD itself is neatly laid out and quick to navigate. Plus, there’s so little to change from the default settings that you should have little need to jump in there very often anyway. 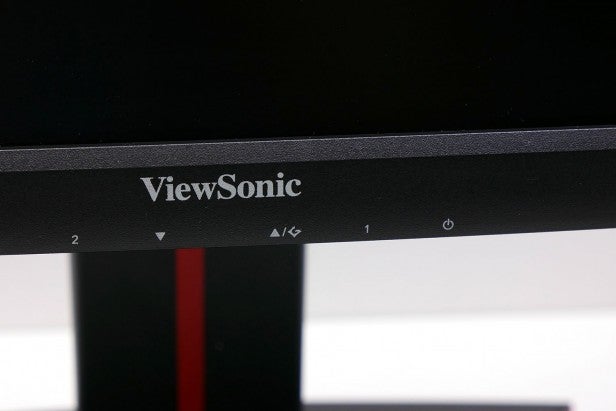 In terms of gaming options, Viewsonic has thankfully kept things simple, with none of the superfluous gaming presets of other monitors. Instead, you setup the colour, contrast and brightness settings as you like and then there are a handful of individual gaming features.

These include a low input lag mode that reduces image processing. Theoretically this should result in a slight drop in image quality in exchange for a lower input lag but I didn’t notice a big change in quality, so it seems like a win-win.

There’s also a response time setting, which is a typical LCD Overdrive setting for increasing pixel transition speed. Set to its maximum, it reduces motion blur but introduces some haloing, where there’s a slight light trail behind moving objects as pixels correct themselves to the right colour. Meanwhile, left set to Standard there can be some visible ghosting, which can be particularly distracting when scrolling through text. As such, the middle setting offers the best compromise. 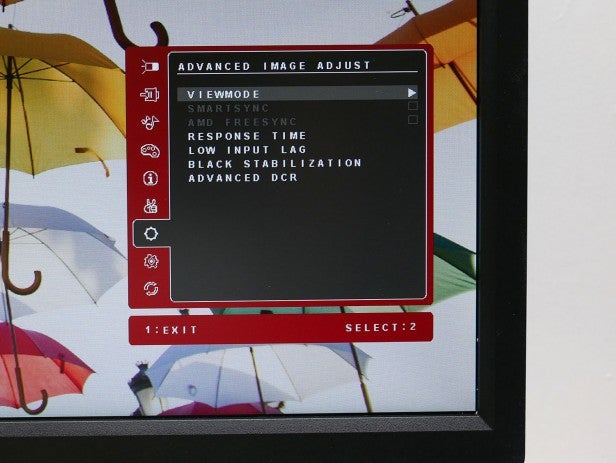 The third gaming feature of note, other than the option to turn on FreeSync, is Black Stabilisation. This adjusts the gamma curve so that darker parts of the image appear lighter – a potentially useful setting for seeing enemies lurking in the dark.