What is AMD FreeSync?

FreeSync is a new monitor technology that’s one of the most exciting developments we’ve seen in PC gaming for some time.

It’s designed to reduce some of the visual artefacts that can occur as a result of your monitor’s fixed refresh rate being out of sync with your graphics card’s frame rate. The technology is a response to Nvidia G-Sync, which was introduced about 18 months ago, and works in the same way, by adjusting the refresh rate of your monitor to match the frame rate of your graphics card. The result is supposed to be much smoother looking games even at lower frame rates.

Crucial to AMD’s approach is that where Nvidia’s solution replaces the controller in the monitor with one of its own design, AMD simply suggested a new addition to the DisplayPort standard. As such it’s likely FreeSync will become completely standard over the next few years.

For now, though, FreeSync is a new technology only available on a handful of monitors and only if you’ve got an AMD graphics card. We fired it up to see whether it’s worth getting in there early.

AMD FreeSync – What are tearing and stuttering?

Before we look in depth at FreeSync, let’s first define what it’s trying to fix. FreeSync and G-Sync both aim to solve the same problem, which is the poor quality experience caused by your graphics card’s frame rate being out of sync with your monitor’s fixed refresh rate.

These artefacts come in two forms. The first is known as tearing and it’s a result of your monitor not waiting for a complete new frame before updating its image. Instead it shows multiple frames in one image, resulting in a stepped, torn-looking image.

SEE ALSO: Check out our pick of the best Monitors 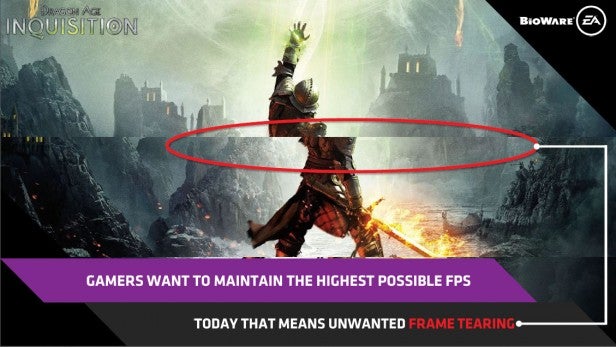 This has long been identified and can be fixed by turning on V-Sync. This simply tells the monitor to wait for a whole frame to be delivered before updating the display. The result is tear-free, complete images.

However, V-Sync has its own problems. If the frame rate of your graphics card is insufficient the monitor ends up having to wait more than a single refresh cycle before displaying a new image. For instance, on a 60Hz monitor, each image is displayed for 16ms. If the monitor has to wait more than this period for a new frame then it instantly has to wait another 16ms before updating its image. The result is that you get a flipping between one image being shown for 16ms, another being shown for 32ms and even some being shown for 48ms or more. 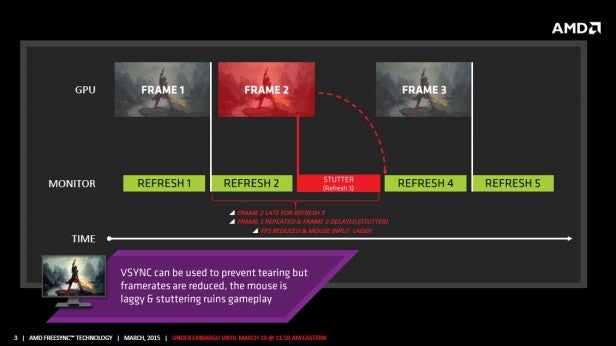 While these time periods may not sound like much – after all, 24fps films show each image for 42ms – the eye is surprisingly sensitive to changes in refresh rate. This undesirable variation is known as stuttering.

AMD FreeSync – How it works

FreeSync and G-Sync both aim to fix these issues by eliminating the fixed refresh rate of the monitor. That is, the graphics card explicitly tells the monitor when a whole new frame is ready and the monitor refreshes straight away.

So, for our 60Hz monitor example, if a frame takes 17ms to be delivered, instead of the monitor waiting until 32ms it is shown straight away.

While you still get a considerable overall variation in the exact time each frame is displayed the variation between each frame is likely to be much smaller. This is because when moving around a 3D game world the likelihood is that the scene won’t have changed so dramatically between frames to significantly affect the frame rate – one might take 16ms, the next might be 18ms. However as you move from, say, an indoor area to an outdoor area the overall frame rate will drop. 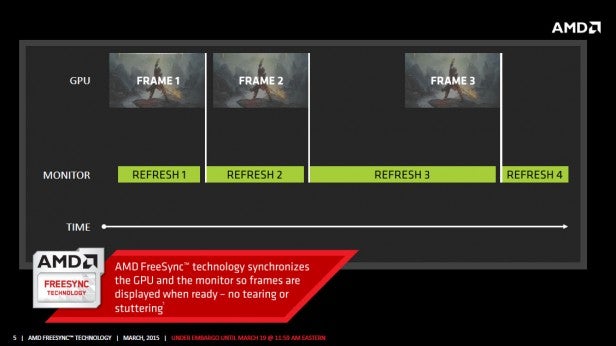 The other advantage of this, other than it simply looking better, is that it reduces the feel of lag between you moving your mouse and seeing the image move onscreen.

The way FreeSync works is actually quite simple. It uses the existing DisplayPort vBlank signal that tells the monitor when to render a new frame but instead of keeping it fixed as previously, it varies it. This requires new controllers in the monitor – known as scalers – but being a tweak of an existing standard it’s easy for monitor manufacturers to implement.

Although FreeSync and G-Sync solve the same basic problem, the way they go about it is somewhat different. While both use the same vBlank tweaking method, for G-Sync, Nvidia added the tweak to its graphics cards but then it also designed a completely new monitor scaler too. This G-Sync module is proprietary and costs a fair amount of money so monitors that use it are markedly more expensive.

In contrast, AMD simply looked at how Nvidia had created G-Sync and suggested just changing the existing standard.

The result is that there is now an open standard called Adaptive Sync that is part of the DisplayPort spec. This can be implemented free of charge and by anybody, and as such it looks set to become a widely adopted feature. FreeSync, then, is just the AMD branded version of this with FreeSync-stamped products having been certified as worthy by AMD.

The only hindrance is that old hardware doesn’t recognise this command so you’ll still need to buy some new kit. Theoretically there should be plenty of monitors that can simply have their firmware upgraded to support Adaptive Sync but at this stage it’s looking unlikely this will happen, with manufacturers instead choosing to charge you a pretty penny for a new monitor instead.

SEE ALSO: Why your next monitor should have AMD FreeSync 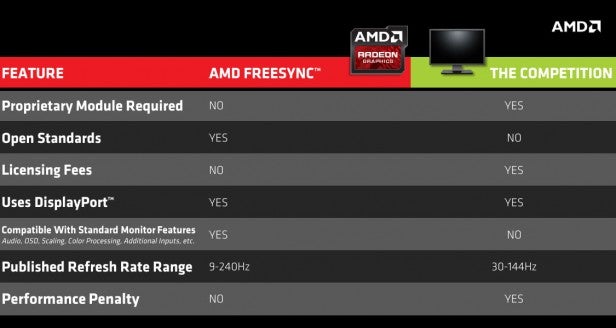 Similarly the only graphics cards to support Adaptive Sync are AMD ones, with most of its GPUs and APUs of the last couple of years supporting the tech. Whether Intel and in particular Nvidia will choose to adopt the standard isn’t yet known but it would have to be a move of extreme sour grapes (or money making) to not do so.

Because of this open standard Freesync monitors should be cheaper than G-Sync ones but currently monitor manufacturers have been cunning about not releasing directly comparable products so any cost saving is masked by other differences in things like stand design and build quality. However, a couple of examples give a hint as to the cheaper cost of FreeSync.

Meanwhile, comparing FreeSync to normal monitors, there appears to be around a £50 to £80 premium for FreeSync models, though again direct comparison is difficult.

As well as its openness, FreeSync has a few other advantages over G-Sync. The first is that unlike G-Sync there isn’t a slight performance hit when it’s enabled. G-Sync can reduce performance by 3-5%, though in our tests we’ve found the difference to be almost imperceptible. 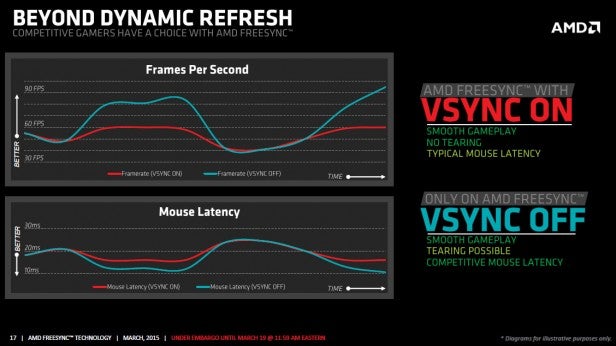 FreeSync also allows the user to choose whether they would like their monitor to stay fixed at the maximum refresh rate of their monitor when the graphics card delivers higher frame rates or if the monitor should revert to a v-sync off state. Most users will likely stick to the former option but that latter is useful for competitive gamers who want the better look and feel of FreeSync but don’t want to compromise on performance when the opportunity arises.

Finally, and perhaps most importantly, because FreeSync is an open standard it is being implemented by normal monitor scaler manufacturers. This means it comes with all the other features those scalers normally contain, such as colour and brightness controls, an onscreen menu and any extra features the monitor may have. G-Sync is more limited in this regard, and is still strictly limited to only being able to support two inputs – one DisplayPort and one HDMI.