Available on Xbox 360, PS3, Xbox One, PS4 (reviewed), PC
We’re not sure what Ubisoft’s management has been drinking, but we wish the boards of other gaming giants might take a sip or two. Following on from Child of Light – a beautiful, artsy celebration of 16-bit Japanese RPGs – we now have a kind of 2D graphic adventure, visualised like a European graphic novel and exploring the horrors of the First World War.

Valiant Hearts has flaws, some fairly deep, but you certainly can’t accuse Ubisoft of playing safe.

It’s the tale of four people and one heroic dog, as an enlisted French farmer, an American volunteer, a reluctant German trooper and a brave Belgian vet become embroiled in the events of the Great War.

The narrative ties into real events, but Valiant Hearts is playful enough to embroider them. There may well have been a boss battle in the smoking ruins of Rheims Cathedral involving a Zeppelin and a shattered pipe organ, but history is oddly silent on the subject. 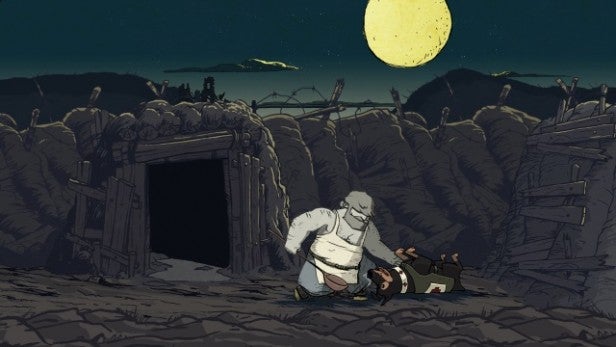 Like Child of Light, with which it shares the UbiArt 2D framework, Valiant Hearts is an incredible-looking game. It has the look of an old newspaper strip or Franco-Belgian bande dessinée, where gruff, highly stylised characters play out their dramas against gloomy, sketched-in backdrops, the game occasionally and abruptly shifting to a split-screen or frame-in-frame mode to show you incoming planes, a German sniper, or a friend in imminent peril of a gas attack.

The animation hums with personality, giving heroes a distinctive shamble or a muscular onward stride. Where other games have tried to bring war to life through realism – like Brothers in Arms or the early Calls of Duty – or through dark fantasy, like The Darkness, Valiant Hearts does it through artistry and suggestion.

If anything, it makes it all the more shocking, and perhaps less prone to the usual WWI clichés. Sure, we get the mud, the machine-gun fire, the trenches, but this is more a game about smaller, human moments than about waves of men being thrown over the top to die. 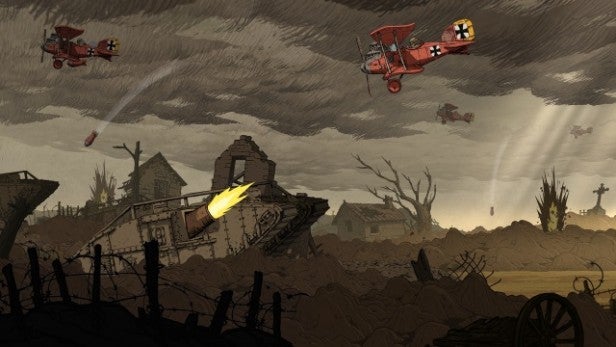 The chapters flick back and forth between the four intersecting stories, focusing understandably on the French side of the action, but not entirely demonising the Germans, bar a few obvious villains and strutting moustachioed guards.

It also flits between styles, working mostly as a kind of 2D puzzle platformer come graphic adventure, but tossing in into-the-screen chases, pseudo boss battles and rudimentary stealth sections. You can see the same spirit at work as in Rayman Origins and Rayman Legends; a desire to not be confined by style or genre, but to take what works for each situation and give it a go.

It’s not always effective. Valiant Hearts’ biggest problem is that the gameplay can be pedestrian, no matter how imaginatively it’s visualised. With no inventory system as such the puzzles are often limited to moving objects here and pushing levers there, digging through spaces, rotating wheels or distracting guards.

If you thought the puzzles in Broken Age were disappointingly simple, then you might not even consider Valiant Hearts’ puzzles to actually be puzzles. The highlights involve the dog, who’s used as a sort of remote helper, going into areas where your hero cannot reach or can’t be seen. Even these, however, won’t have you scratching your head for more than a minute. 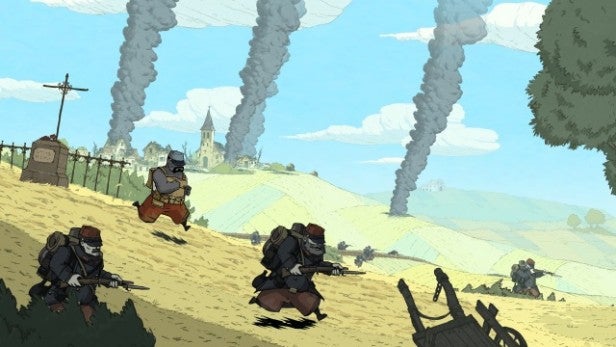 Nor are the action or stealth sequences particularly challenging. Your heart might sink at the thought of a boss battle in a game where heroes only have one life, but they’re still pretty easy, and the same goes for the different chase sequences. It’s a generous game with checkpoints, too.

Normally we’d look at this kind of thing pretty harshly and start muttering about style, substance and unsatisfying arthouse tosh. With Valiant Hearts, though, we just don’t have it in our hearts to do anything more than grumble.

In a way, the game feels like it’s rooting for you to keep going, push your way past the obstacles and follow the heroes on their journeys. And while it’s not a tough game, it’s full of enjoyable or exciting set-pieces, whether these involve a moonlight raid for medicine behind enemy lines or a daring escape from a POW camp. 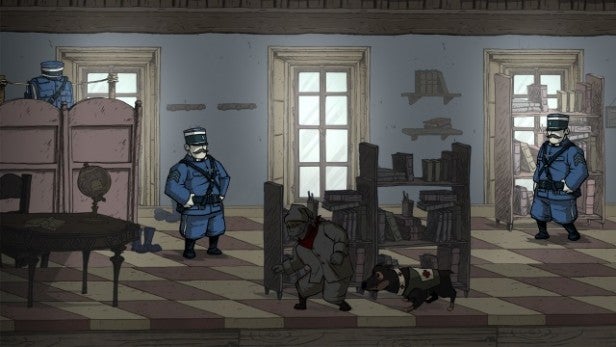 There’s also an endearing warmth here. The characters are sketchy, with no dialogue bar mumbled half-lines and simple, graphic prompts, yet that simplicity works in its favour – you get enough to understand their hopes, fears and needs.

There’s humour, music, silliness and more than a little sentimentality, yet Valiant Hearts never feels disrespectful. In fact, when it tries to educate, it goes a little overboard, with an onslaught of virtual information cards that give background details on the war, the lives of soldiers and the various trials, tribulations and terrors of life on the front. It’s not that this stuff isn’t interesting – it is – but you’re best advised to come back to it periodically rather than let it spoil the flow.

There are other complaints, but they’re all pretty minor. Like a lot of games, Valiant Hearts seems weirdly obsessed with collectibles, and – as in too many games – that obsession seems at odds with an often desperate tale of struggle and survival.

We also encountered one weird bug, where going in the wrong direction during an early chase sequence caused the sequence to halt and the chase to roll on indefinitely, without anyone actually in pursuit.

Finally, it’s not exactly massive, with even the longest of its four chapters rattling by in around ninety minutes. Still, given the £11.99 asking price, that’s not a huge problem.

Verdict
Valiant Hearts isn’t perfect, and not everyone will like its tone, its graphic novel style or its story, but it’s a strange, beautiful and genuinely special game. Let’s not get carried away; as a work of World War I art it’s no Paths of Glory, Regeneration, Birdsong or All Quiet on the Western Front. It’s not even a Blackadder goes Forth.

It will, however, make you think, make you feel, and maybe see things from a whole new perspective. For that alone, it deserves to be played.