The history of gaming isn’t exactly replete with amazing comebacks, but Rayman’s is now right up there with Elvis Presley in ’66 or Muhammed Ali in ‘70/71. Here was a character who’ d failed to make a mark for most of a decade, who had been reduced to playing second fiddle to a bunch of Raving Rabbits in a minigame compilation. The only way to fall much lower was to appear drunk on a celebrity chat show or make a guest appearance in an iPad ‘find the hidden objects’ game. Yet with 2011’s Rayman Origins, the little guy with no obvious limbs was starring in the game of his life. 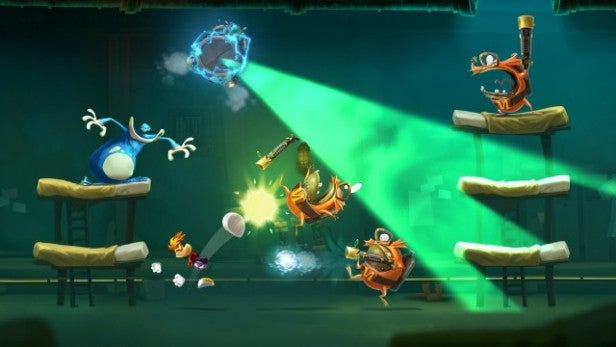 Rayman Origins was gorgeous to look at and impossibly smart, funny and inventive, and the same applies to its follow-up, Rayman Legends. We won’t delve much into the plot or premise. While Rayman and his mates are sleeping, some sorcerous hooligans kidnap his friends the Teenies and lay waste to the surrounding area. It’s up to Rayman, Globox et al to sort it out, rescuing whoever needs to be rescued and bringing the villains bang to rights. Everyday work for a classic platform hero, you might say.

And this is very much a classic platform game. It’s played in 2D, though there are 3D elements in the game’s larger threats and the scenery. Both Rayman and the various alternative heroes you unlock can run, jump, punch and glide, and success is basically a matter of running left to right, jumping over gaps and obstacles, boffing the odd baddie and rescuing their caged and tied up friends along the way.

Of course, there is a little more to it than that. Sometimes the scenery is alive, with rocky paths shifting as you run, or buildings that sink into the sand as you attempt to clamber up them. Carnivorous plants dangle ropes that drag you upwards; handy if you can jump off before you’re swallowed. Spiked tentacles unfurl around you, while colossal dragons chase you from one platform to the next. It says a lot about Rayman Legends that all this stuff happens within the first hour of play. 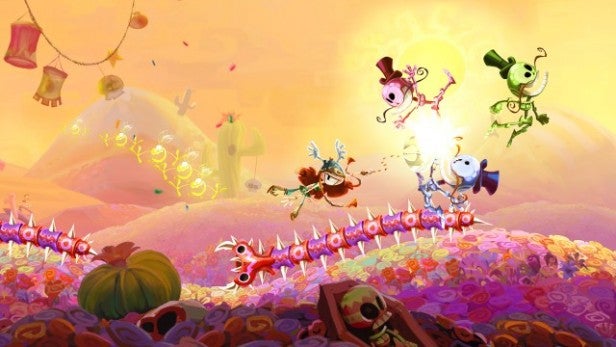 And that’s not all. Rayman Legends was originally designed as a Ubisoft showcase for Wii U, and that’s reflected in the way that the touchscreen is used. At specific times during single player levels or at almost any time when you’re playing multilayer, the touchscreen is used to move a weird flying frog critter, Murfy, around the screen.

Tap on those creepy eyeball tentacles and they retract. Swipe through ropes and you cut through them, dropping spikey obstacles out of the way or creating lines for your heroes to swing on. Catapults can be used to get rid of pesky dragons, while muscles bound behemoths can be tickled, rendering them vulnerable to a crafty punch.

Certain platforms can be dragged around the screen, while later levels have you moving shields to protect moving heroes or slicing pathways through an edible landscape. It’s a a great twist in single player, and an even better one in multiplayer, giving you a new way to team up and work together. 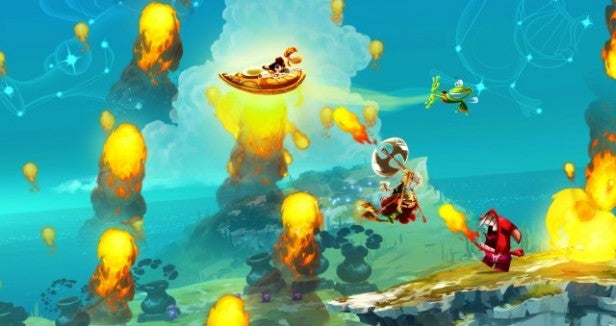 There are compromises. Playing on the Wii U in single player you take over Murfy while the CPU controls Globox, and while it’s smart enough to make the most of any opportunities you give it, there are still times when you wish it did things just a little bit differently.

On the Xbox 360 and PS3, meanwhile, Murfy is moved from place to place automatically whole you control the hero, and all you do is press a button to make him activate the current mechanism. It’s a perfectly functional way of doing things, but you’re left aware that you’re missing out on a little of the fun.

Still, there’s so much fun to be had here that it’s hard to grumble. One of the things we like about Rayman Legends is the structure. Each level is entered from a picture gallery hub, and by rescuing the VIPs you unlock new levels and then new worlds.

Brilliantly, you don’t have to play through then linearly. You can unlock the second, third and fourth worlds as you play through the first, check them out when you’re stuck on a difficult bit and return when you’re ready for another go. Levels within a world are ranked by difficulty and you’re never left banging your head against a brick wall. 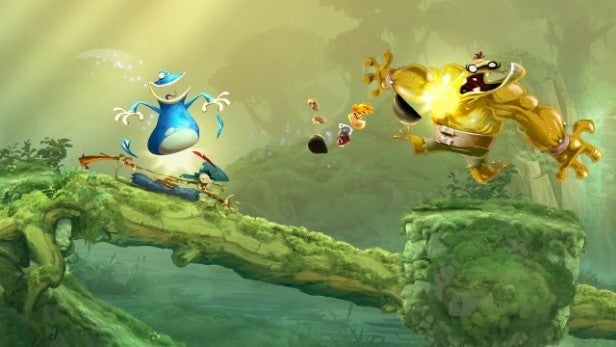 The more you play Legends the better it gets. It packs in so many ideas and new mechanics every level that you keep fearing that it has to run out, yet amazingly this never seems to happen. There are fantastic semi-stealth sequences, complete with a cool spy movie soundtrack. There are brilliant levels that see you tearing up walls pursued by a flood of angry demons. There are levels that see you transformed into a duck, and levels where you’ll find your hero shifting size and shape.

And that’s without mentioning the highlights – the music themed levels where every jump and every punch takes place in time to the soundtrack. Not only are the tracks involved brilliant – you might have already seen the version of Ram Jam’s Black Betty in the demo – but the speed and thrill of the experience is fantastic. On the one hand it’s rhythm action, on the other hand it’s the show-off thrill of perfect platform-gaming. 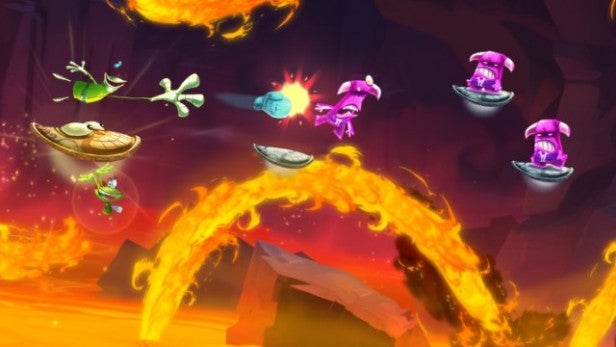 Finally, we ought to mention longevity. There’s a lengthy list of levels and most are pretty extensive, with plenty of collectibles you just won’t get on your first run through. Yet Legends goes two better by adding remixed challenge versions for multiplayer play, and then throwing a large selection of favourite Rayman Origins levels on top. It’s a really generous package in  every way.

Much as we love the monochrome style of Limbo or the crisp, cartoon looks of New Super Mario U, Rayman Legends is the most beautiful 2D platformer we’ve ever seen. The hand-painted art is the perfect reflection of the game’s quirky imagination, and when it’s time to throw out a lavish set-piece it never disappoints. Each character and each world is rendered with real personality and loving detail, and the use of light, colour and shadow shows an artistry you don’t see in many 2D games. If you have a good HD screen then you’re in for a treat.

Music is a central part of the experience, and even when Legends isn’t dishing out its signature themed levels the score and effects are a joy. You’ll here echoes of popular classics and rock hits, and it all works together to bolster the atmosphere of creative anarchy that pervades the entire game. 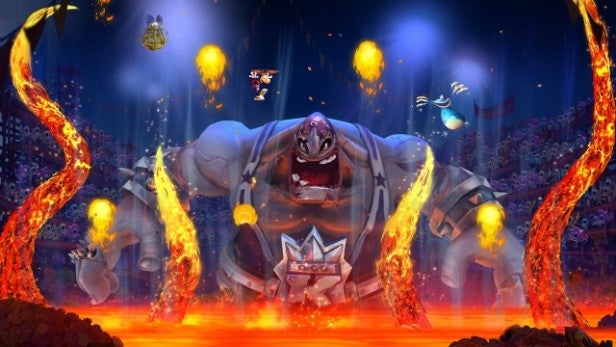 Rayman Legends is a game you’ll want to share, and it goes the extra mile to help you do so. Up to four players can run and jump around one screen at any time, with a fifth joining in on Wii U as Murfy. Unlike New Super Mario U characters pass in front of or behind each other rather than bouncing off, and while this makes the game a little less chaotic and amusing, it also makes it a hell of a lot less frustrating. Provided one character stays alive the others will float bloated around the screen once killed in action, so it’s relatively easy for one skilled player to carry a less skilled group. That’s great news for anyone playing with their family.

Rayman Origins was a great platform game, but Rayman Legends actually surpasses it, with superb hand-painted graphics, a more player-friendly structure, vast quantities of levels and bonus levels to conquer and some of the most inventive and ingenious levels we’ve seen in any game in the genre – and that includes the best of Sonic and Mario. The Wii U version is the one to get, but whatever hardware you have to play it on, this is a bona-fide masterpiece of platform gaming.