Renown is a double-edged sword. On the one hand, being the creator of Day of the Tentacle, Full Throttle and Grim Fandango makes it an awful lot easier to get Kickstarter funding for your new game, particularly if you’re promising your first point-and-click adventure in sixteen years. On the other hand, all those Kickstarter backers – not to mention anyone else who remembers the golden age of LucasArts – will have some huge expectations of what the finished work will be.

No surprise, then, that there are some serious differences of opinion over Broken Age, and over whether Tim Shafer and Double-Fine have delivered the game they promised. Without the name, without the Kickstarter funding, Broken Age would probably have been warmly received just about everywhere. As it is it’s a brilliant game, but one that’s disappointed a portion of its audience. 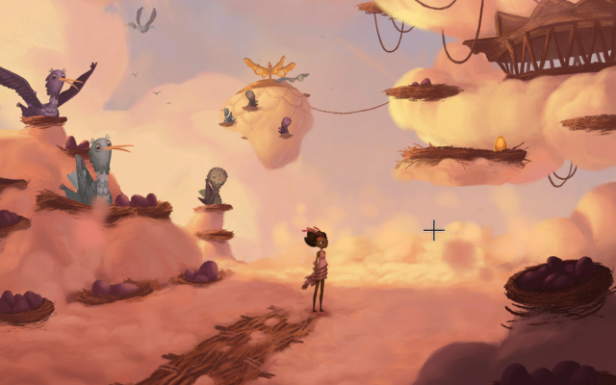 That’s not because it isn’t a pure point-and-click adventure. In fact, it’s hard to think of a purer point-and-click adventure that hasn’t come from a small European studio in the last ten years. It features 2D characters moving across predominantly 2D scenes, picking up and interacting with objects, selecting conversational gambits while they chat to other characters, and using and combining objects to solve simple puzzles. The controls are a refinement of the SCUMM system even LucasArts stopped using after Curse of Monkey Island (1997). You have a pointer on the screen, you click to walk to a position, click to pick up or interact with objects or characters, and click and drag items out of an inventory that sits in the right-hand corner of the screen. Broken Age couldn’t be a more traditional point-and-click.

Nor is the presentation a concern. Featuring hand-drawn graphics produced with the same distinctive style we saw in Psychonauts, Brutal Legend and The Cave, with the addition of a slightly dreamy, impressionist feel, Broken Age looks stunning. Like all Schafer’s best games it’s not easy to pigeonhole in an existing genre or setting – though it riffs on sci-fi, fantasy and horror movies, US culture and games – and the Schafer/Double Fine hallmark is everywhere you look. The music is perfect and the voicework unimpeachable, with great star turns from Elijah Woods and Masasa Moyu, plus cameos from Will Wheaton, Adventure Time-creator Pendleton Ward, Jennifer Hale and Jack Black. 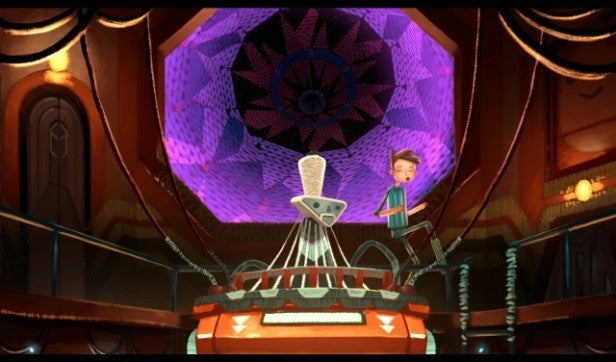 Nope, the key problem for Broken Age is difficulty. There are a few vaguely challenging puzzles in there, but these mostly come down to your failure to spot a way from one location to another, or an object hiding in plain sight on the screen. Most of the time, however, the puzzles are fairly simple, fairly linear and heavily hinted at in the dialogue. If you come to Broken Age expecting the kind of labyrinthine, multi-stage puzzles we all loved in Monkey Island or Day of the Tentacle, then you simply won’t find them.

At times the game seems to be reaching out for them – for instance when you need a perfume to get picked as a potential sacrificial victim – but settles for an easy solution instead. To make things worse, this initial release is only the first act of the game, with the second coming as a free download later on this year. You can sail through it in around four to five hours. 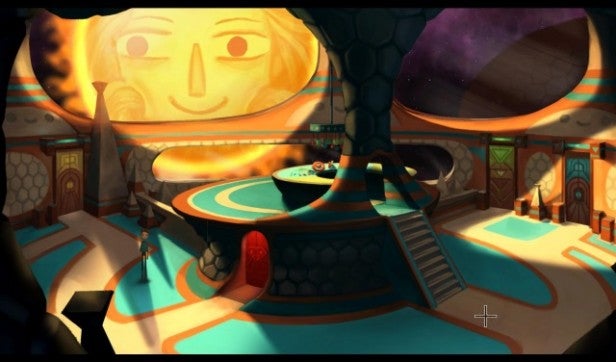 This, of course, has been the issue with any number of recent adventure games, including Telltale’s The Walking Dead and The Wolf Among Us. The first still managed to triumph because it told great stories with interesting characters that you could root for. Can Broken Age manage the same feat?

Mostly, yes. We won’t go too far into the plot for risk of spoilers, but it’s a game composed of two halves. The first begins with a young woman preparing for a starring role in her village’s Maiden Feast – a celebration with a darker edge than all the cupcakes, ribbons and bunting surrounding it might imply. The second begins with a young man trapped inside a mysterious spaceship, his every move monitored by a maternal ships computer, and his days filled with staged rescue missions, artificial meals and snacks. For a long while it seems the two stories have nothing in common, but Broken Age keeps you wondering, in just about every sense of the word. 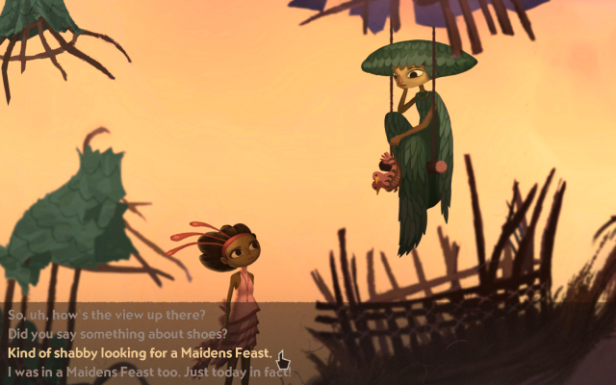 Broken Age’s tales aren’t as moving or emotionally-wrenching as The Walking Dead’s. The two protagonists are likable and the situations arouse your sympathy and interest, but this isn’t the kind of game that leaves you gasping with shock or wracked with nerves by a difficult dilemma. What you do or say won’t change what the characters around you think, or have any major impact on how the game plays out.

Yet Broken Age succeeds on its own terms. It’s warm. It’s charming. It’s inventive. It’s funny. It puts you in places you wouldn’t imagine and gives you things to do that are bizarre, smart or mildly disgusting. It’s not afraid to be daft, yet it’s bright enough to feed you clues as to what’s really going on. Will it make you laugh out loud or scratch your head like you did for Monkey Island or Day of the Tentacle? Probably not, but as long as you don’t expect it to you’ll come away feeling entertained, with a cliff-hanger ending that leaves you desperate for act two.

Come into Broken Age expecting a return to the glory days of point-and-click, and its simple, linear puzzles might disappoint you. Come into it expecting a brilliant story, wit and humour, some unexpected twists and some gorgeous art, and you’ll get everything from it you might want. It might not be the second coming of Day of the Tentacle and Monkey Island, but Broken Age has its own tale to tell – and it’s one we can’t wait to finish.