What is the UE Megablast?

If you’re on the hunt for a deafeningly loud, nigh-indestructible Bluetooth speaker that’s perfect for garden and pool parties you’ll struggle to do better than the UE Megablast.

The Megablast is the successor to the Megaboom, and it’s the largest speaker in UE’s current range. It comes with redesigned internals alongside the new Amazon Alexa smart functionality currently in vogue. In theory, this means you can shout commands and questions at the Megablast when it’s connected to a Wi-Fi network and actually expect a response.

What’s more, thanks to a new over-the-air update, Spotify Premium subscribers can now control their playlist with voice commands, meaning you won’t be limited to Amazon Instant Music. Huzzah.

Overall, the new internals work to great effect and mean the Megablast offers above average audio quality at this price. If you want a portable-ish speaker that can really get the party started then the Megablast is fantastic. But issues with its Wi-Fi functionality mean it isn’t the cleverest smart speaker around. 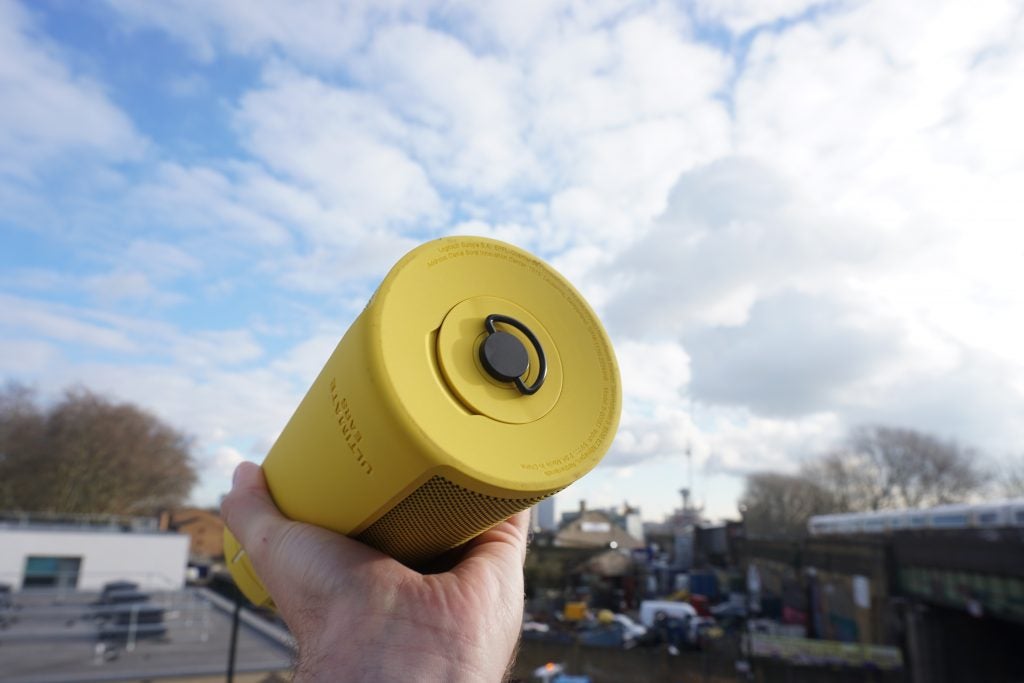 Visually, the Megablast isn’t a huge departure from UE’s other speakers. Outside the slightly different colour options, the speaker looks very much like a blown up UE Boom 2.

Like the Boom 2, the Megablast has a 360 speaker grille that’s broken up by a rubberised strip that runs up it’s long side and top and bottom faces. The band houses the speaker’s physical volume and power controls. A micro-USB charge port sits on its bottom. The only noticeable difference between the Boom and the Megablast is the latter’s increased size. It stands a good four inches taller and is twice as wide.

The design may not have the same wow factor it did back in the day, but I’m still a fan of my colourful yellow review unit. Its design makes it easy to stand the Megablast in the centre of a room, or group at the park without it taking up oodles of space. It’s rugged, too: IP67 certification means it’s both water- and dust-resistant.

After sending the speaker tumbling down my flat’s stairwell during an accidental drop, I can confirm the Megablast is close to unbreakable. The only thing to be aware of is that, unlike the UE Wonderboom, the Megablast isn’t buoyant and will sink if dropped in a pool or bathtub.

Battery life is solid considering the speaker’s size. While it never achieved the full 16 hours that UE quotes, I always managed to get a full 9-5pm work day’s use out from the speaker, playing music at around 60% volume over Bluetooth – which is pretty good.

UE is also selling an optional ‘Power Up’ stand, which will let you charge the Megablast without having to use the slightly fiddly micro-USB port on its bottom.

Unlike the outside, then, under the hood the Megablast has been completely redesigned, with updates that radically change the speaker’s setup process and functionality. The biggest change is the addition of Alexa and Spotify voice command functionality, which brings with it direct Wi-Fi connectivity and two microphones for voice control. 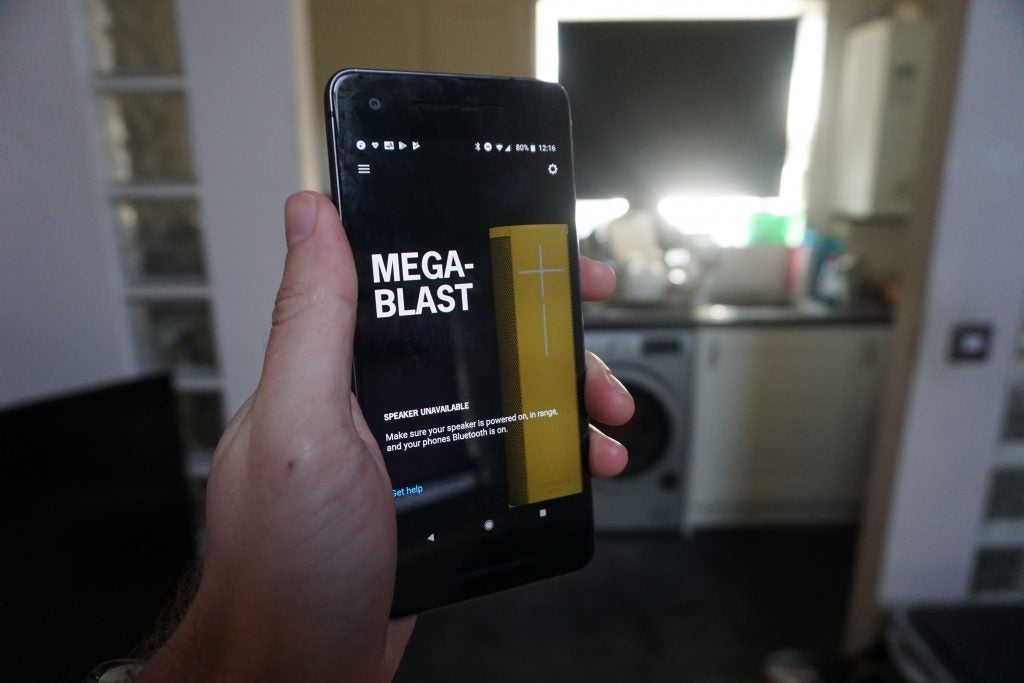 The new functionality is great in theory, but it actually brings with it a few unwanted complications. If you simply want to stream music via Bluetooth then the process remains easy as pie. Power up the Megablast, hit the top connect button and pair it with your device of choice – you’re good to go. Trying to get access to Alexa or Spotify voice commands is a little trickier, however.

To do this you’ll have to download the Ultimate Ears app, connect the speaker to your Wi-Fi, and then sign into your Amazon or Spotifyt account. This should be easy, but I experienced issues getting the Megablast to register with my Wi-Fi.

To start, the speaker refused to show up on the list of available devices. Following a good half hour of network and device resets I finally got the two to connect, only to experience intermittent Wi-Fi dropouts.

The problem was particularly prominent when switching between streaming music from Bluetooth sources to shouting commands at Alexa – particularly annoying since Alexa and Spotify voice commands need a constant internet connection to work.

When it did finally connect I lost my Bluetooth connection, leading to an awkward game of chase the signal. It all proved super-annoying and eventually I found myself streaming Spotify over Bluetooth from my phone by default, rather than bothering with the voice commands. This is a little sad asthe speaker’s microphones are actually pretty good and generally managed to hear and understand my commands, even when playing music at high volumes.

The implementation of Alexa also appears to have stripped the Megablast of some of UE’s more interesting features. As it stands, the company’s party-up feature doesn’t work on the Megablast. Party up lets you pair multiple UE speakers via Bluetooth. 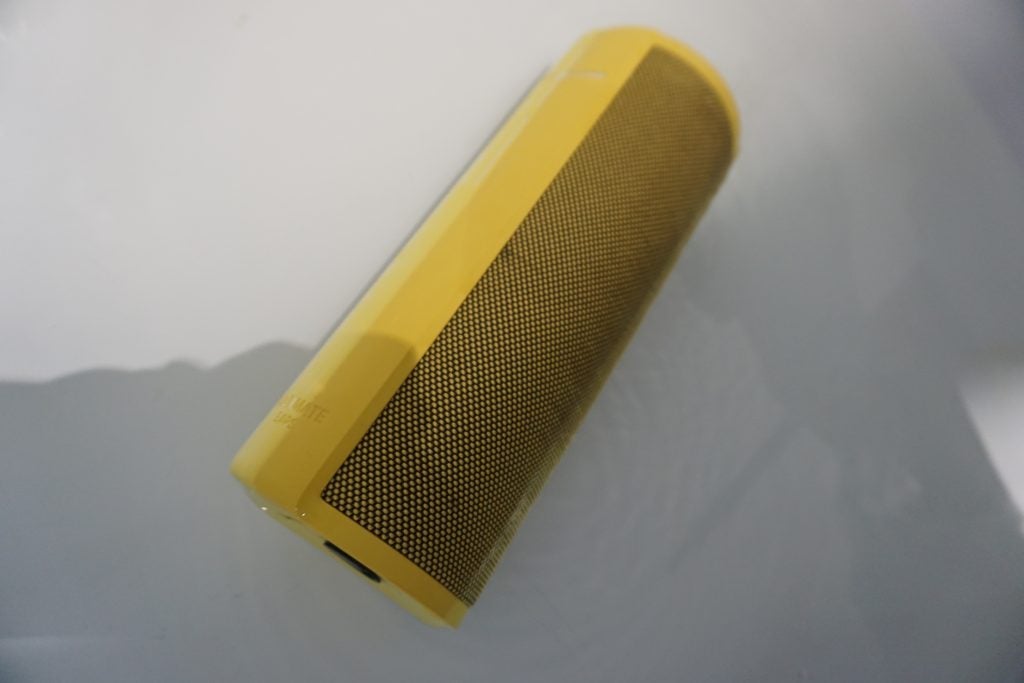 Fortunately, the Megablast’s audio-focused improvements under the hood are a little more impressive.

UE claims it’s revamped the Megablast’s acoustic architecture, adding improved passive radiators for higher volumes and better airflow, plus new tweeters in addition to the two active drivers you had in the older Megaboom. This apparently makes the Megablast 40% louder than the Megaboom.

I didn’t have a Megaboom to hand for this review, but can confirm the Megablast is very, very loud for a speaker of its size. It easily smokes the UE Boom 2, Amazon Echo (2017) and Google Home when it comes to max volumes.

Using the Megaboom while working from home, I generally had to limit the volume to between 50-60%. On the one occasion I maxed the volume, as well as suffering ring in my ears, I had a neighbour request that I turn down my music – apparently, there are people in the world that that don’t like Journey.

Elsewhere, the Megablast has the same strengths and weaknesses as UE’s other speakers. Tonal balance is solid for a speaker at this price. Mid-heavy guitars rang out in punk and rock tracks without sounding acidic. Highs, although not as sparkly as dedicated speakers such as the Sonos 1, are defined and legible. Bass is a little on the powerful side for my liking, but not to the same level on many competing Bluetooth speakers, such as the Beats Pill+.

The issue is also only really noticeable on more complex music genres, such as classical and post rock, where some more subtle parts can be partially buried by the Megablast’s rumbling low end; it could do with being a little more controlled. This is disappointing, as, even though the stereo image isn’t the widest I’ve heard, most song’s parts are suitably separated.

Low-end aside, the Megablast offers pretty decent dynamism for a speaker at this price. Crescendo guitar parts from Bill and Ted-style instrumentals maintained a pleasing swoop sound and breakdowns during emo songs have a pleasing oomph factor. 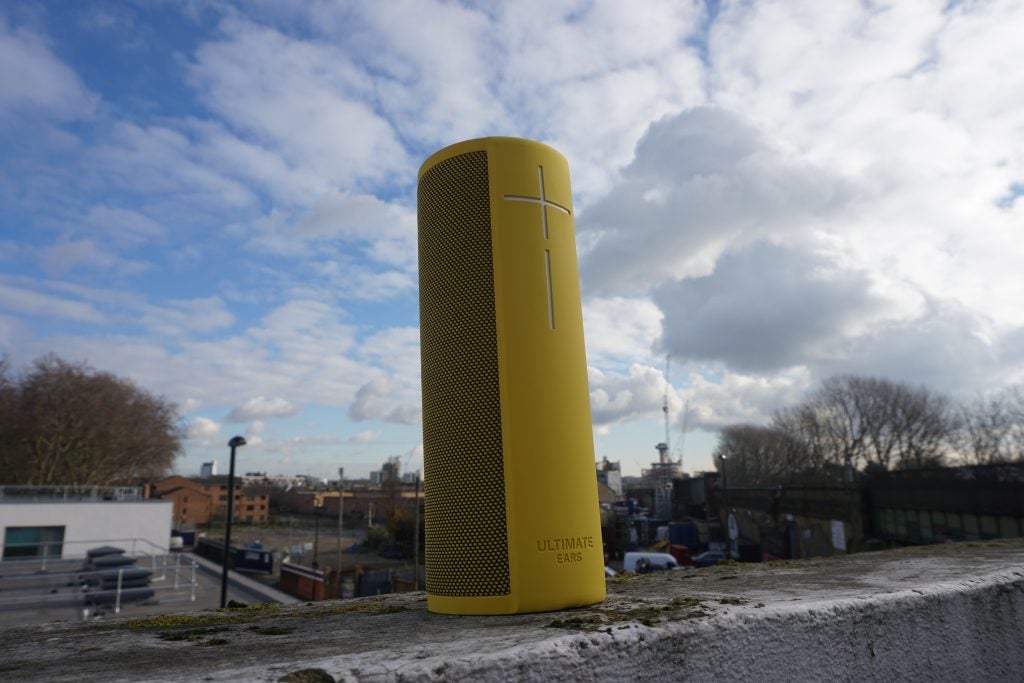 Why buy the UE Megablast?

If you want a deafeningly loud Bluetooth speaker that’s equally at home blasting out tunes in the park as it is in a flat party then the Megaboom is a solid choice.

Featuring a robust design that’s likely to survive beyond the average wear and tear expected of a speaker, solid battery life and above-average – albeit slightly bass-heavy – sound, the Megablast is pretty darned impressive as a standalone speaker.

I’m not fully sold on its smart speaker capabilities, however. Although Alexa works well enough when using Wi-Fi services such as Amazon Instant Music, connectivity issues pop up when you try swapping back to Bluetooth streaming.

The Megablast is a bodaciously loud Bluetooth speaker with some tagged-on smart functionality.