It’s a weird sensation, playing something that’s both familiar and so different after a two-decade pause. Two Point Hospital is a spiritual successor to Bullfrog’s classic Theme Hospital, developed by a team led by Bullfrog veterans Mark Webley and Gary Carr, who helped build the original. At times, Two Point Hospital feels less like a homage or remake, and more like a long-lost sequel, sticking close to the style and gameplay of the original, but with a few tweaks that make it a better game long-term.

Like its illustrious forbear, Two Point Hospital is a hospital management sim with a distinctly British sense of humour, where you’re brought in to manage a series of hospitals in the varied regions of Two Point County. Each hospital is a shell, usually expandable by buying and converting nearby lots, and your first challenge is to make the most of the available space, laying out new rooms as you can afford them and they become available, to treat the patients who’ll soon start pouring in.

You’ve got your basic reception areas and GP’s offices, not to mention your pharmacies, diagnostics rooms and treatment wards, but it’s not long before you’re adding a range of more exotic facilities designed to treat the game’s weirder and more wonderful diseases. 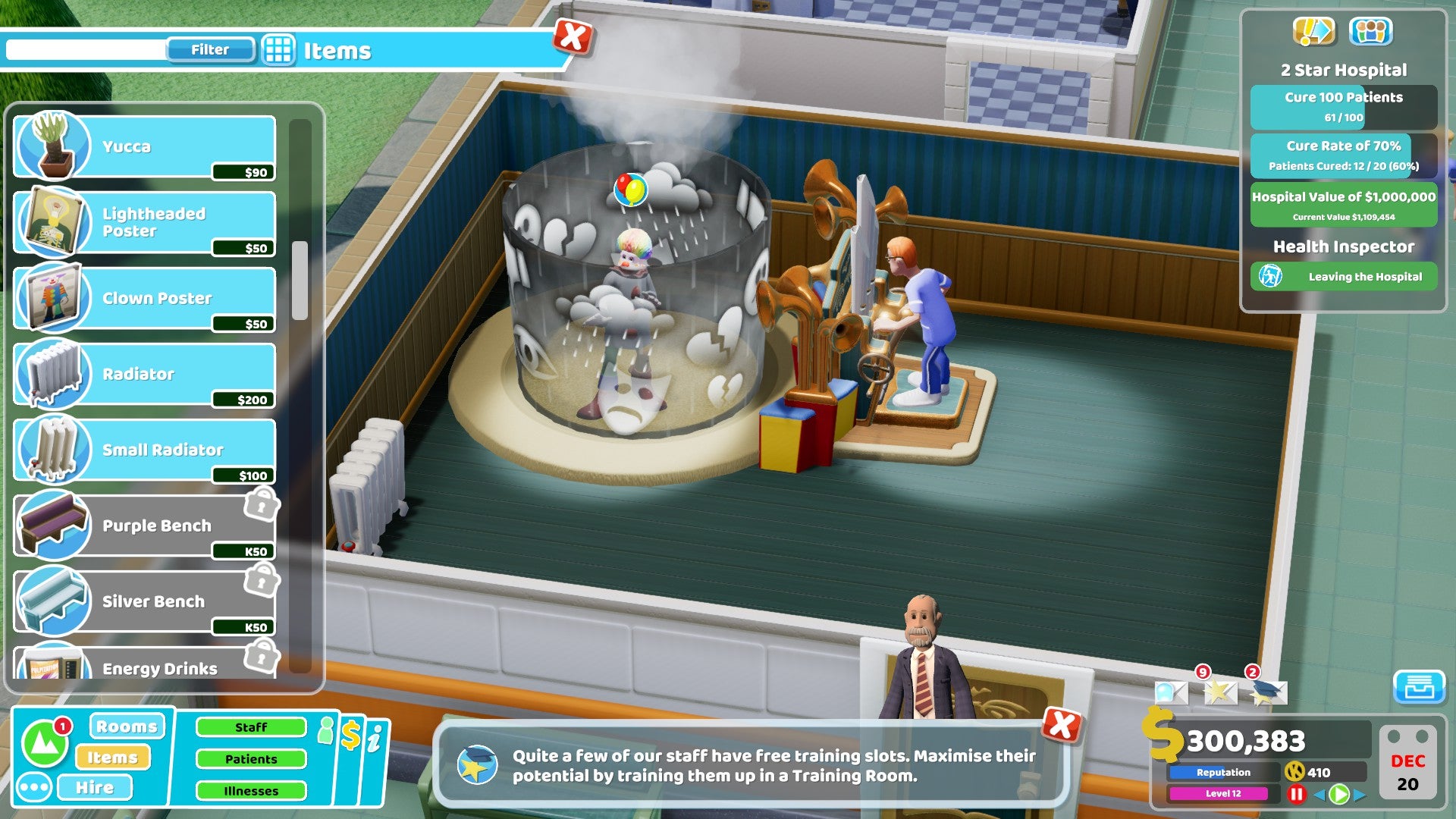 Lightheadedness, for example – an illness where the patient’s head becomes a lightbulb – needs a special De-Lux Treatment Room where the bulb can be removed and the normal bonce replaced. The duller, greyer members of the population need a Chromatherapy ward where they’re doused with brighter colours. In the meantime, you’ll need a handful of psychiatry wards to handle patients who believe they’re rock stars or disco legends. Mass hysteria seems a real problem in Two Point County.

Two Point Hospital gets the basics absolutely bang-on. The click and drag interface for pulling rooms together couldn’t be easier, while the essential elements for each room – desks, beds, treatment tables and weird gizmos – are thrown at you automatically before you add more decorative elements. All the info you need is always close to hand and explained through the more tutorial levels early on, though it definitely helps if you’ve played the odd sim game before. Compared to some other recent sims, like Jurassic World: Evolution, it’s a remarkably streamlined, flexible and intuitive design.

And while at first, everything seems, well, a little too simple, it’s not long before Two Point Hospital gets pretty frantic. Each hospital has three sets of objectives resulting in three different stars to collect, and while you can unlock the next hospital just by completing the one-star objective, it’s hard to resist going for the second and maybe third. This usually involves a more careful balancing of income (from treated patients) and outgoings, not to mention more careful expansion and planning of the hospital and its resources. 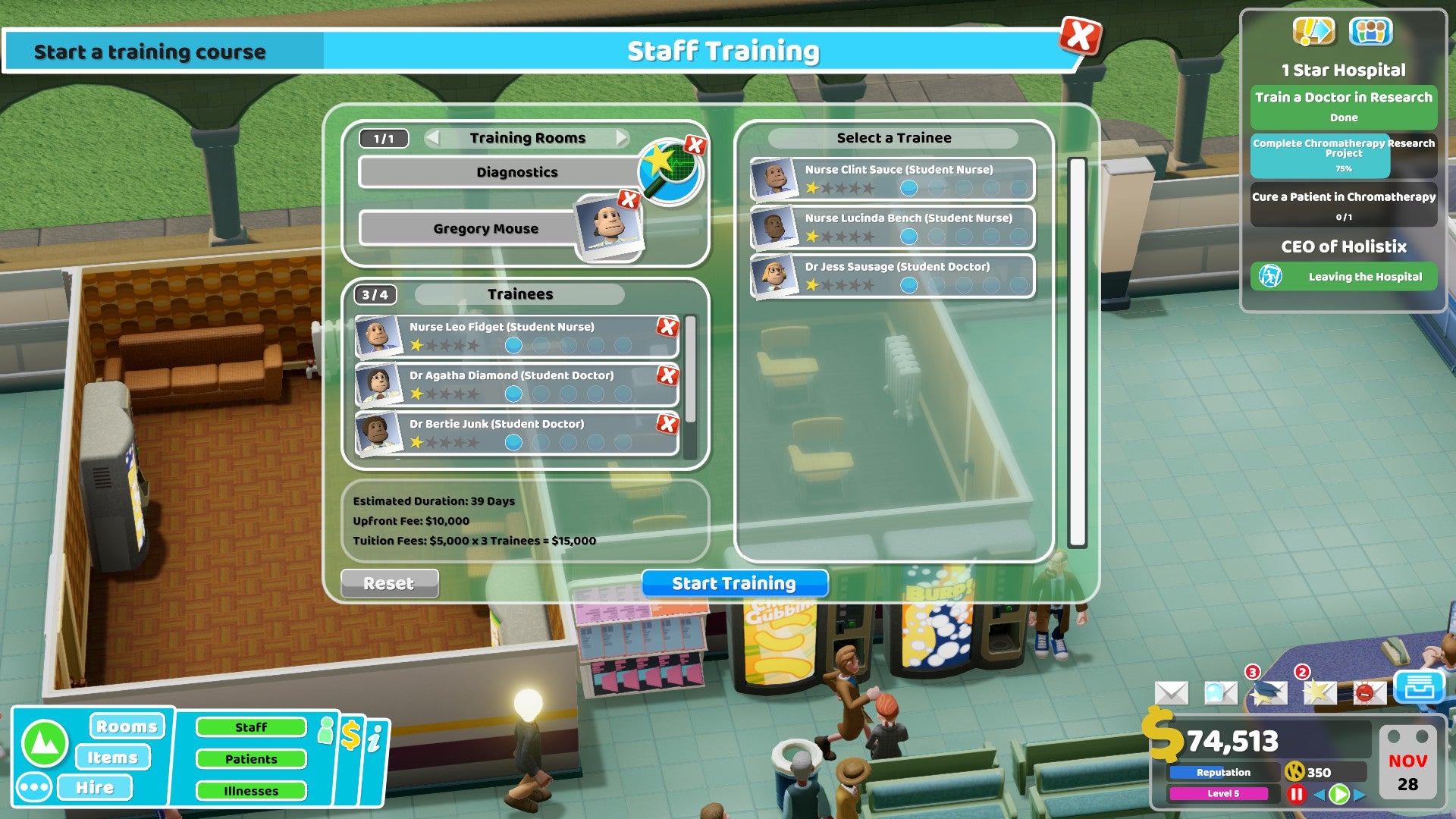 More importantly, each successive hospital brings new complications – training, research, surgery, public health and staffing problems – meaning that you have to learn something new, work with it and think about what you’re doing in the long term. Sure, it’s easy staffing your hospital when you’ve got a steady stream of applicants with the required skills, but what if you have to train your own psychiatrists, surgeons, and specialists? Where will you find the janitors with the necessary abilities to upgrade machinery or exorcise the ghosts of your less lucky patients? Can you get on top of an outbreak when you’re racing against time to research a cure?

In fact, with time you’re as much an HR manager as a planner, trying to keep your teams happy with luxurious staff rooms, nicer working conditions, training and career development and raises. The old Jeremy Hunt approach doesn’t work so well in Two Point County.

Inevitably, you’ll get stuck trying to complete some of the two and three-star objectives, but here Two Point Hospital’s structure works to its advantage. While you have different budgets, facilities and staff from hospital to hospital, any research you’ve done and any rooms you’ve unlocked are persistent, allowing you to come back and tackle a hospital you struggled with earlier with new tools at your disposal. This won’t always help you turn a failure around, but if you’re struggling, it’s sometimes worth leaving the sinking ship for new and returning when you have a chance to make things right – or at least come in and have a second go. 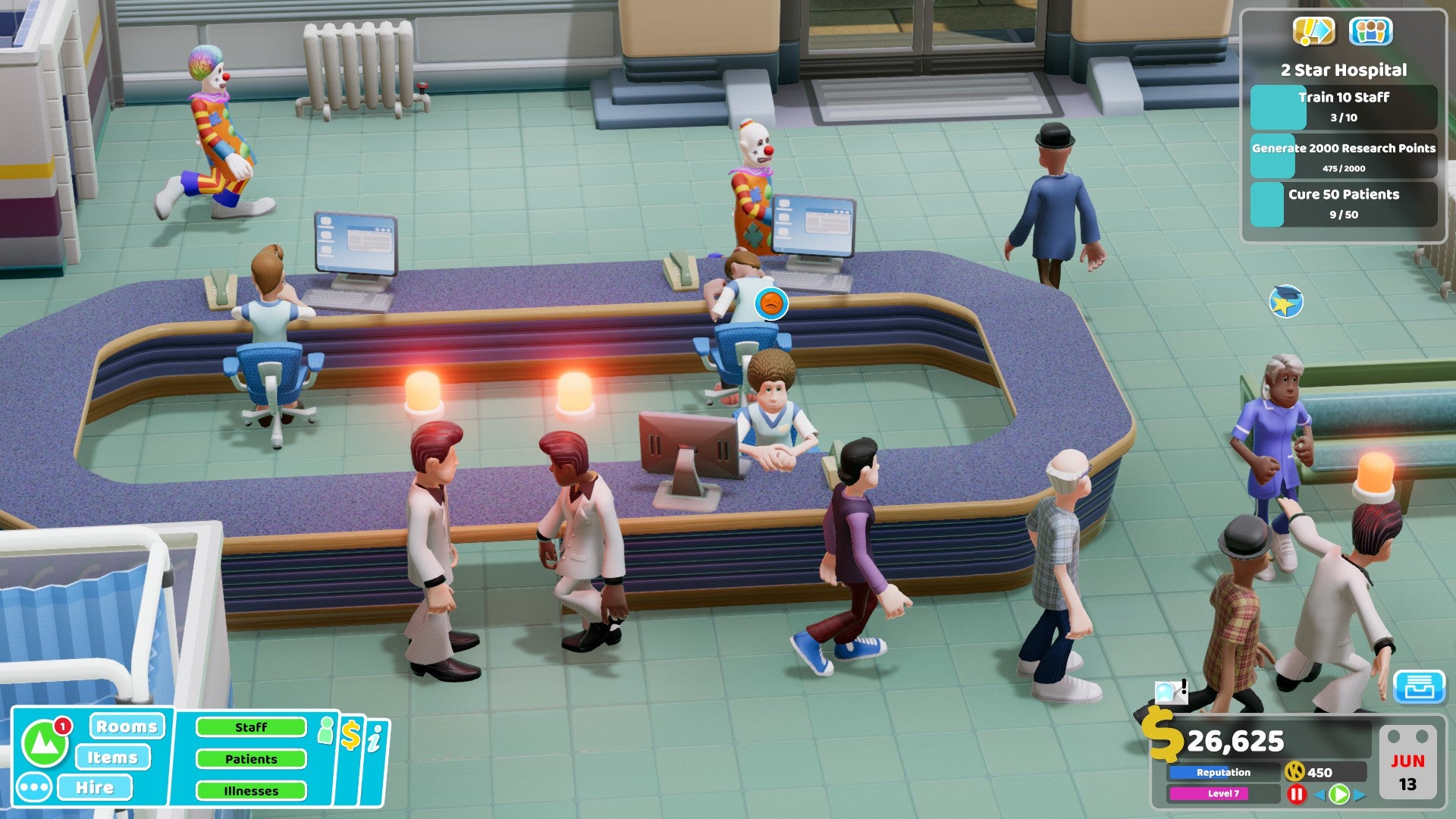 What’s not quite so helpful is the game’s save game strategy. Personally, when I’m playing a sim game I like to save at key stages so that I can come back and load if it’s clear that I’ve done something really stupid or completely missed a fundamental idea. Two Point Hospital has one save game per profile with an auto-save, and there’s no way to go back manually to an earlier point. This helps keep the game interesting and challenging, but it’s also a little frustrating to see a lot of good work undone by a handful of daft decisions.

It’s surprisingly easy to create a vicious cycle where patients aren’t getting treated so your hospital has no steady income, making it impossible to spend what you need to fix things – though you can always take out a loan. I’ve also had a couple of situations where crowding in a corridor or in the staff room leads to a weird and catastrophic breakdown of the whole operation, though you can probably file these under design lessons learned.

What we have here, then, is a classy and elegant sim with plenty of challenging content to get stuck into. But what really puts Two Point Hospital above many peers is its presentation and humour. The cartoony graphics do a nice job of dragging the old Bullfrog style forwards two decades, with full control of the viewpoint and zoom level giving you scope to enjoy the personality and detail in the action. 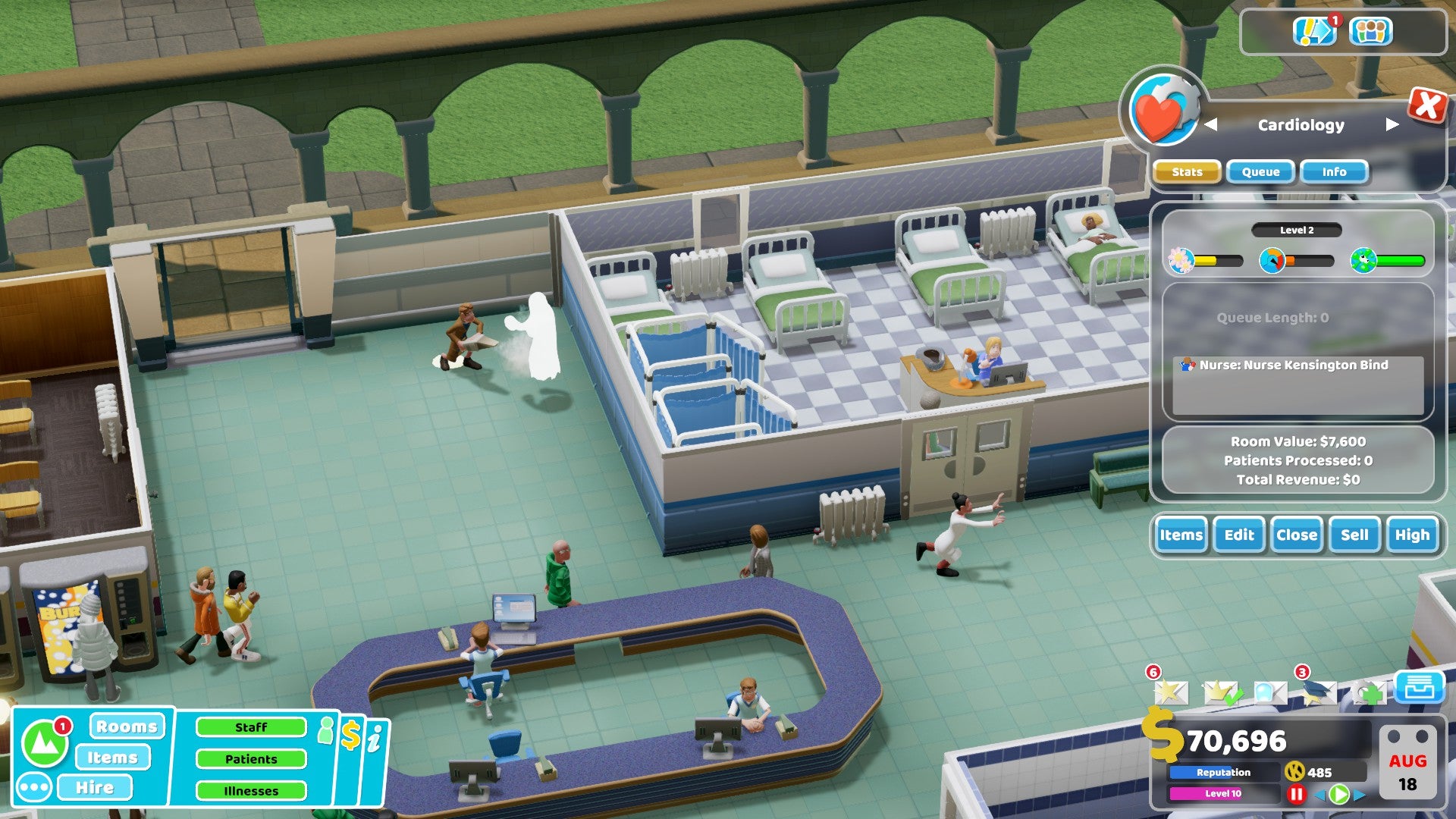 I think it’s the sound that really sells it, though, with the increasingly bizarre announcements, cheerful score and fantastic radio DJs – all parodying familiar, mostly British favourites – creating a rich and thoroughly likable atmosphere. You can pick the odd flaw in Two Point Hospital, but it’s near impossible to be annoyed with it for long. There’s always something new to grab your interest, even if it’s shooting feral monobrows before the hairy infestation grows.

True, Theme Hospital aficionados might note that its successor doesn’t always reach the gruesome comic heights of the original, with fewer really nasty-looking diseases and a bit less vomit being generously sprayed around; a hospital sim with less vomit is like a Doom with less hellspawn and less gore. You could also say that it’s a little timid when it comes to genuinely new ideas. Well, if you’re looking for a genre-redefining sim, you’ve probably come to the wrong place. Nostalgia is the very stuff that makes it live.

Two Point Hospital takes us right back to the nineties glory days of the management sim, with compelling gameplay, eccentric humour and a healthy dose of gently anarchic fun. You might complain about the save games or the fact that it sticks very closely to the old, established path, but few sims of recent years have been this accessible to get into or this interesting long-term. Miss the good old days of Theme Park, Theme Hospital, and The Movies? This enormously lovable sim will more than fill the hole.