Released to tie in with the new Fallen Kingdom movie, Jurassic World: Evolution plays to the strengths of the developer Frontier and the Jurassic Franchise. It doesn’t take cutting-edge scientific research to spot the shared DNA with Frontier’s Planet Coaster and Zoo Tycoon, yet it never forgets what made Jurassic Park and Jurassic World such very special attractions: the panic, the chaos, the knowledge that, at any minute, this could all go wrong. In the words of Ian Malcolm in The Lost World, ‘Yeah, ooh, aah, that’s how it always starts. Then later there’s running and screaming.’

Here, you’re the new guy in charge of a series of parks, building and revamping the facilities, creating enclosures, then filling them with sharp-toothed, razor-clawed dinos. You need to look after both the dinos and the guests. 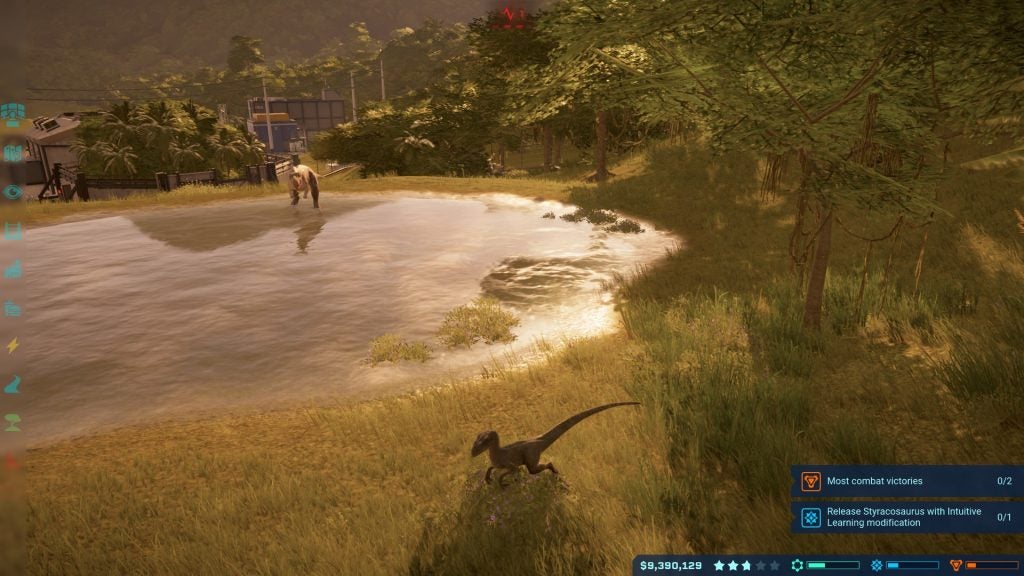 It’s your job to ensure the former get food, water and a safe, controlled environment; and the latter the stores, transport facilities and accommodation that will keep them spending money in your park. The more visitors you have and the more they spend, the more resources you have to develop your facilities and – more importantly – research and breed new dinos.

This is a more significant part of the game than you might expect. Dinosaurs come from eggs incubated at the Hammond Creation Labs that you attach to each enclosure, but you’ll begin the game only able to raise a handful of underwhelming critters (although we’ll give a pass to the Triceratops).

To get the more exciting species in your park, you’ll need an Expedition Centre that can send teams out to dig sites around the world, plus a Fossil Centre that can take the resulting fossils and extract the dinosaur DNA within. The more DNA your teams collect, the more complete the genome you have available for breeding, and the more successful your efforts will be. While you’ve got half an eye on managing and upgrading the park, you need to keep the other on your expeditions and extractions.

Meanwhile, things will keep on going wrong, giving life – or its cousin, gruesome death – a chance to find a way. Electric fences fail, dinosaurs become rowdy, tropical storms push in and take their toll. Dinosaurs will get sick, fall out with each other, or burst through the fence and go on a rampage.

When dinosaurs meet visitors, the results are rarely pretty, particularly if the dinosaurs in question are carnivorous. After all, we all remember what differentiates these exhibits from, say, the pirates in Disneyland’s Pirates of the Caribbean. Luckily, provided you have the right facilities you’ll be able to tackle such issues better than it’s historically been dealt with in the films.
Teams of rangers can repair your fences and facilities, and even tend to your poorly dinos. Splash out on medical research and you can deal with their latest diseases. Meanwhile, the Asset Containment Unit (ACU) can send out helicopters, both to tranquilise misbehaving dinosaurs and transport them back to their enclosures afterwards.

Sure, the odd guest might get crushed or eaten, but your parks can withstand the odd demise here and there (and there and there). You can also build shelters for your visitors to hide in when a storm hits or when the attractions are running amok.

What we have here is a great balance between the gentle pleasures of the Zoo and Theme Park management genres, alongside the gruesome fun of the better Jurassic movies. You can spend hours gently absorbed in the rhythms of building, researching, expeditions and upgrades, with the lure of bigger, better dinosaurs, complete with your own new, custom mutations, dragging you through.
Yet, when things do go wrong – and they will – you have the panic of trying to sort things out before a visitor becomes a snack, along with a certain amount of ghoulish glee at your delinquent dino’s antics. Generally speaking, it’s a management sim with less in the way of micro-management and more in the way of fun.

It’s helped by a clever structure, suggesting that Frontier has learnt something since Planet Coaster and Zoo Tycoon. First, each island has its own challenging conditions, whether regular storms or budgetary constraints. Second, on each you’ll be offered missions by the three different wings of your company: science, entertainment and security. 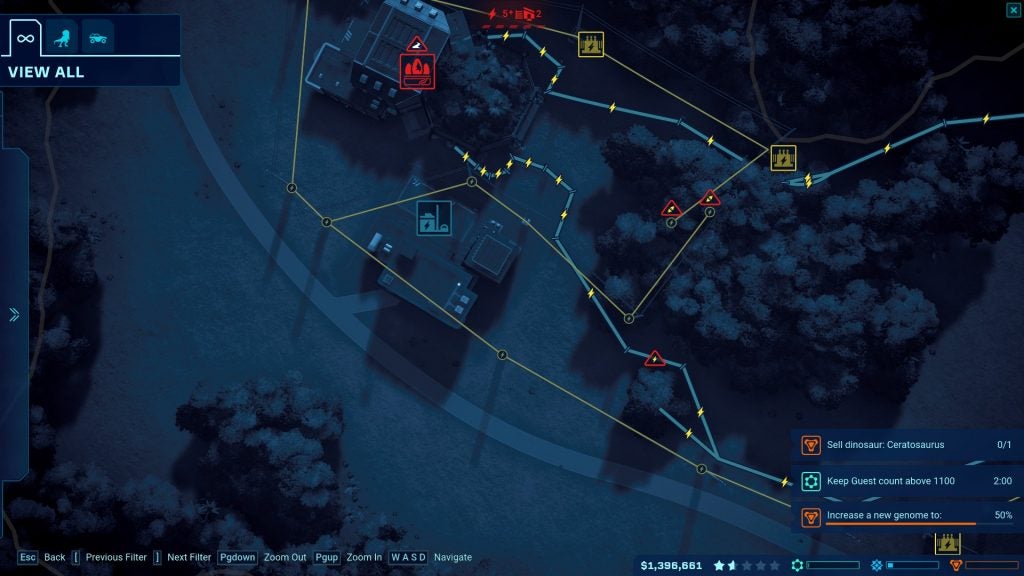 Sometimes, you’ll be asked to tackle tasks you were handling anyway: doing research, making dinos and the like. At other times, however, you’ll be asked to do something different, unwise or spectacularly irresponsible – such as let a dino loose, encourage dino vs dino fighting, or even breeding a spectacularly tough and aggressive uber-dinosaur. You already be aware of the consequences from the slightest acquaintance with the movies, but it means that there’s always something beyond the day-to-day.

This is also a more immersive style of tycoon game, not just because the visuals are so rich and detailed – check out the beautifully-animated dinos, radiant lighting and moving vegetation – but because you can always step into the shoes of an ACU operative or ranger and get stuck in from their point of view. This might mean stepping into a jeep or one of those gyrospheres from the recent movies, and it might mean taking photos, kickstarting repairs or sniping with medicine or tranquiliser darts at problem dinos. Either way, Evolution does a great job of pulling you further into the action.

In short, Frontier’s game is a treat: probably the most straightforwardly enjoyable management sim in years, with some great touches for fans of the movie and an excellent sense of humour. Jeff Goldblum lends his voice to an in-game Malcolm, dispensing sage advice and despairing of your bosses’ repeated errors of greed, judgement and hubris. While it’s disappointing that other key roles get more anonymous stand-ins, this still feels like a Jurassic adventure.

In fact, only a couple of things let it down. One is the sheer fiddliness of locating your facilities and putting them in place. You can see where something ought to go, but the game keeps warning you of obstructions and refusing to let you just drop your building into place.
This gets particularly aggravating when you’re trying to manage the energy grid, where connecting lines and substations seem absurdly convoluted. Even many hours in, you can find yourself puzzled as to why a facility with ample power supplies and a substation right next door still comes up as being without available electricity.

The other is a general lack of information. There are some mercifully short and snappy tutorials early on, plus a map view that makes it easier to track down escaped dinosaurs or busted facilities. However, there’s still much work involved in finding out why, say, your new Ankylosaurus isn’t happy in his current enclosure, or how you’re meant to research and prepare a specific mutation.

To make things worse, the game has a horrible habit of setting you missions that you aren’t in any position to complete, simply because certain dinosaurs, buildings or upgrades won’t be available until a little later in the game.

These are irritants, but not problems on a T-Rex scale. Jurassic World: Evolution is the best kind of management sim, one that wraps challenging decisions inside a slick, fun experience with humour and a little family-friendly gore.

Where it could have been a reskinned Zoo Tycoon or Planet Coaster, it feels like part of the franchise – and there’s still plenty of meat for fans of Tycoon titles. This is an addictive, absorbing and entertaining management sim with the power of a T-Rex and a Raptor’s pace.