Unavowed is the most important thing to happen to the world of point and click since Tim Schafer decided to check out this new Kickstarter website everyone keeps talking about. By splicing together adventure games and RPGs, Unavowed elevates both genres.

The signature gimmick here is to take the concept of the adventuring party from games such as Mass Effect or Pillars of Eternity, and inject it into the point-and-click adventure.

Here your protagonist is joined by a group of supernatural crimebusters, including straight-laced half-djinn Mandana, accountant turned fire mage Eli, newly sober spirit medium Logan, and cop-who-saw-too-much Vicki. These characters actually appear in your inventory, alongside the random collection of items any adventure game protagonist acquires. So the solution to a problem might be “use Logan on ghost” or “Use Eli on flammable object”. 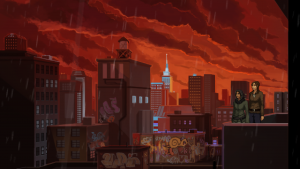 You can take only two of them with you at once, and you’re locked into that decision, unable to shuffle your pack. This can seem frustrating and arbitrary when, for example, you forgot to take Logan and there’s a ghost right there you can’t talk to.

Eventually, however, I came to appreciate it. Every character can solve every puzzle, just in a different way, so refusing to let me switch them out challenged me to make use of who I had. It also ensured that a second playthrough with different characters would be fresh and interesting.

Yes, Unavowed is that previously impossible dream: an adventure game that stands up to repeated playthroughs. This is reinforced by the other big import from RPGs: moral decisions. Every chapter ends with a difficult moral choice, and they’re not easy choices to make either – you’re almost always choosing between two bad options. I honestly sat there thinking them through longer than I did some of the puzzles.

This, combined with a choice of three playable prologues (a la Dragon Age Origins) means that you could easily play Unavowed through two or three times, getting a fresh experience every time. And since this is an 8-10 hour adventure game, not a 50-hour RPG, you probably will.

All of this amounts to a big shake-up of the point-and-click genre. Interestingly, though, Unavowed hasn’t been made by some newcomer genius or returning prodigal son. It’s from Wadjet Eye Games, run by husband and wife team Dave and Jane Gilbert. They’ve been developing and publishing games in this supposedly dead genre for the past 12 years. Their most famous work, the Blackwell series, connects directly to Unavowed. The two games are set in the game’s universe, and Logan’s powers are identical to those of Rosa Blackwell. 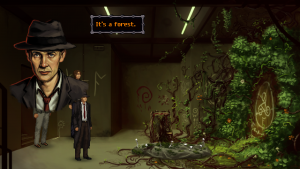 That experience really shows, as Unavowed carefully sands off the harsh edges that marked the adventure gaming’s previous heyday. The interface is simplified and accessible, with only a mouse and left-click required. The puzzles are simple, but not too simple, just long enough to occasionally stump the player for a few minutes, but never longer than five.

Everything that makes Unavowed great was successfully prototyped and refined in those long years in the wilderness. It’s a heartening tale for fans of unfashionable genres everywhere.

Unavowed also shares a tone with Wadjet Eye’s previous games. Specifically, it has the Blackwell games’ sense of bittersweet melancholy. Each chapter has the player investigate a different supernatural happening in a different part of New York, and it’s always some kind of tragedy. People have inevitably died, and even the survivors are hurt or traumatised, and despite the presence of sorcery, there’s no way to magically undo it. Instead, the game becomes about accepting these tragedies and trying to move on.

The members of the Unavowed are also almost always recovering from some great sadness in their past, including the player character. Yet there’s a warmth and companionship to them that made me treasure their company.

Eli was my favourite, with his strange love of accountancy and longing for the family he had to leave behind when his power manifested. I never grew that close to Vicky, but that might have been because she was the last character I met. If I’d picked the cop origin story, she would have been the first. KayKay, Logan’s ten-year-old spirit guide, also deserves a mention. She’s a funny, adorable little kid who clearly enjoys being a ghost, but she’s also a kid that died young, presumably unpleasantly.

As always in Unavowed, warmth and humour is still tinged with melancholy. 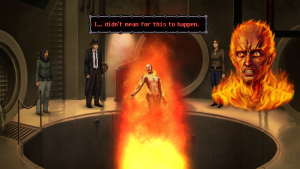 The artwork, too, benefits from artist Ben Chandler’s years of experience with the genre. Adventure games are fundamentally about looking at and interacting with backgrounds, so they really have to look good. Unavowed’s rain-soaked New York doesn’t disappoint. Although the characters can sometimes flit awkwardly between fluid bespoke animation and generic stiff-backed amble.

In those few instances where Unavowed does go wrong, it’s usually a case of not being unconventional enough. In-between using Logan on ghost, for example, you’re still doing regular adventure game found object puzzles. While they never rise to the level of the famous Gabriel Knight puzzle, where you create a  fake moustache to impersonate a man without a moustache, they do give you moments like “why am I carrying this teacup around other than because it was a thing I could pick up?”

Even the companion puzzles can feel a little contrived. One of Eli’s abilities is to read anything that has been burned, and an implausible number of important documents go up in flames as a result. I’m not sure if these are entirely solvable problems, but they did stand out while I played.

These are minor quibbles, but I state them up-front because to those who simply cannot abide adventure games and reach for the walkthrough within seconds of getting stuck, Unavowed probably doesn’t do enough. For the rest of us, though, it’s just right.

Unavowed is a triumph of genre fusion enhanced by years of hard work in an unsung genre. If there’s any justice, it will spark an adventure game renaissance.