Let’s get the big question out of the way. Arriving just over a year after Total War: Warhammer, Total War: Warhammer 2 is more like an expansion pack than a full sequal. There are improvements, enhancements, new features and a new campaign – and it’s hard to gripe with a game this extensive on value for money – but don’t go in expecting a markedly different experience.

The biggest departure is the shift to a whole new continent, new playable races and a different style of campaign. We’ve left Warhammer’s version of Europe behind for the New World, where High Elves, Dark Elves and Lizardmen skirmish over fertile plains, fetid swamps and mountainous jungles, while the Skaven lurk beneath the surface, bursting out to infest ancient cities. If the first part gave us the classic Games Workshop take on a grimmer, darker high fantasy, the second instalment takes us on a more exotic journey into foreign climes. What’s more, playing as the less traditional fantasy races is a whole lot of fun.

The first game was strongest when you moved away from the more history-based races towards the more fantastic factions with their spectacular war machines or brutish troops. This goes double for the second instalment. Take those Lizardmen, for example. Up to a point, they’re exactly what you’d expect; bloodthirsty reptilians with an Aztec/Mayan style. Yet TW: WH2 not only makes them strong, sympathetic, anti-chaos crusaders, but a blast to play. They can bring in dinosaur-like beasts to use as mounts, shock troops and artillery. Accomplish missions or erect certain buildings, and you can insta-spawn even weirder and more wondrous units from your cities. 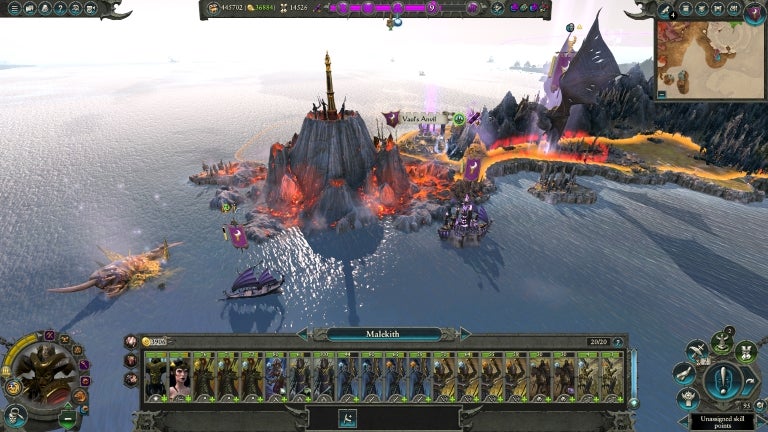 Sure, our cold-blooded chums are a little too keen on slaughter and blood sacrifice, while some of your Saurian troops tend to lose control in the heat of combat, but hey! It’s a tough world out there, and those warmbloods aren’t just going to waltz out of your provinces without a little pushing.

The Skaven, meanwhile, allow for a more sneaky play style, one where your settlements remain hidden until attacked or scouted, and where spreading your corruption is as important as developing influence is for other races. The Skaven are particularly dependent on a specific resource – food – but come with a nice mixture of really cheap infantry units, perfect for swarming, and high-powered artillery units, poison spreading units and lovable, burly rat ogres. Keep getting put down by those pompous High Elves? Lay an ambush and show them why they need to treat you with a little more respect.

Perhaps the biggest change, though, is the new style of campaign. TW: WH2 hasn’t abandoned Total War’s signature mix of turn-based 4X (eXplore, eXpand, eXploit and eXterminate) gameplay with real-time battlefield strategy, but it brings something new to the series: a contested endgame goal. 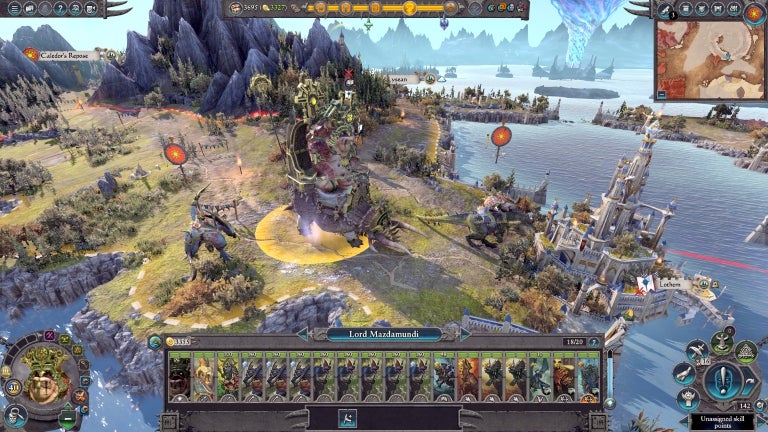 It seems that, many years ago, the High Elves of the New World created a mighty magical vortex to defeat a Chaos incursion. However, recent events have weakened the vortex, leaving it’s powers up for grabs. To seize control, each faction must go through five rituals, each one involving the gathering of a specific ritual currency, then the defence of three linked settlements while the ritual takes place.

What impact does this have? Well, firstly, all the other factions are chasing the same objectives, so if you prefer a slow-build, defensive style of play, tough luck; someone else will accumulate the ritual resources and get there first. Secondly, you need to vary your objectives. Dominating regions, wiping out enemies and building up your cities is still important – and will net you ritual currency – but you’ll also need to explore mysterious ruins and battle over cities where there are rich veins of ritual currency up for grabs.

Thirdly, you can’t afford to be myopic. Focus just on the immediate struggles, and a faction halfway across the continent might trigger and complete a ritual, leaving you with little hope of intervening. That doesn’t mean you need to expand continuously, but you do need a decent exploratory force. 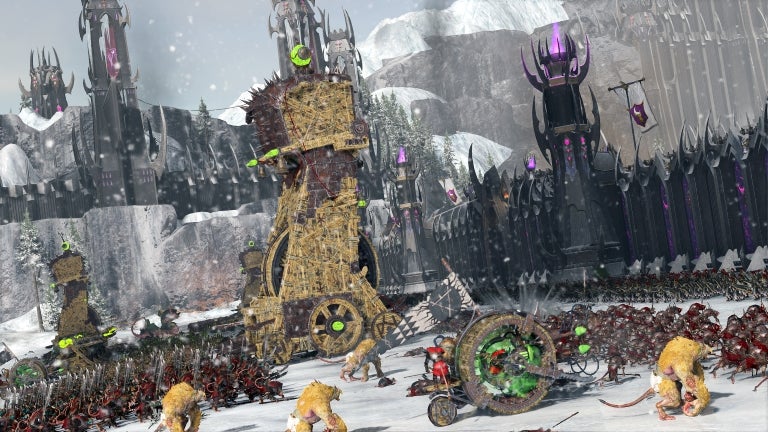 I like the pace added by this new style of campaign, but it’s not the only adjustment The Creative Assembly has made to the formula. There are new treasures to lure you out to sea, plus new hazards to be avoided when you do so. The lords in command of your armies feel less like functional figures and more like developing characters, earning traits that make them more effective at building trade or tackling disorder. Lords in the Skaven and Dark Elf factions can even grow disloyal, meaning you need to keep them busy if you don’t want them rebelling. New rites enable you to boost your faction’s offensive, defensive or economic prowess, tailoring their strengths to your own style of play.

Meanwhile, the existing game mechanics are as absorbing as they ever were. The economics are streamlined but still important; fail to build or develop buildings that create currency, and you soon won’t be able to afford existing armies, let alone recruit new ones. Diplomacy is nicely balanced, always tempting you towards rudeness and belligerence, while keeping you aware of the need to maintain some alliances and avoid engaging in war on more than one or two fronts at any one time.

Plus, there’s always a great sense of progression. As your territory expands and your coffers (hopefully) fill, you can be building new facilities that bring new units into the mix. At the same time your lords grow more powerful, mastering new abilities and perks from the skill tree, while arms and armour won in battle turn them into powerful units in their own right, capable of turning the tide of battle when used at the right time. 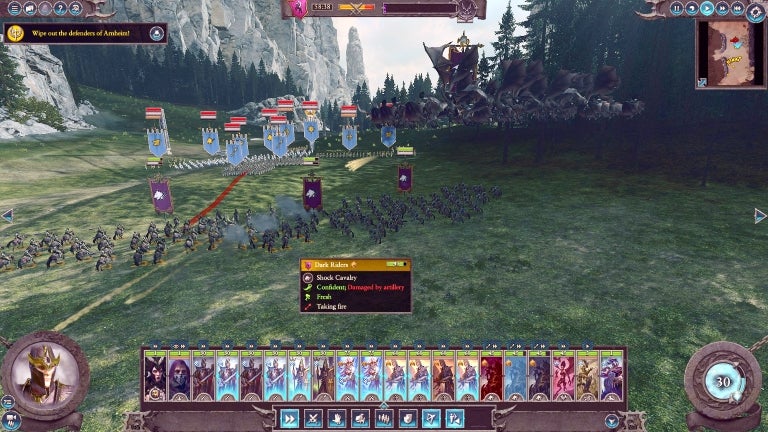 And it’s in battle where the Warhammer part of this Warhammer/Total War hybrid feels most dominant. At times, the violence, colour and anarchy of Games Workshop’s vision feels a little subdued within the turn-by-turn gameplay of a Total War campaign, but on the battlefield there’s plenty of room to let rip. You still need to plan carefully, use flanking manoeuvres, protect your missile troops and artillery and make maximum use of cavalry charges and shock troops. This is still a game where hidden units and terrain make all the difference – where a commanding position can help smaller, weaker units fend off a vicious assault. Yet all the same, there’s room for unexpected triumphs, magical attacks and slapstick disaster.

Here a misplaced barrage from a bonkers chemical cannon can hit your lines harder than it hits the foe. A ragtag line of Lizardmen javelin-throwers can hold off Skaven shock troops long enough for the cavalry to close. There’s nothing more fun than unleashing the Skaven’s Menace Below attack near unguarded artillery units, watching the little Clanrats erupt from the ground and wreaking havoc, or urging a mass of giant-sized rat ogres into the fray.

The Lizardmen, meanwhile, are plain hilarious in battle. On the one side of the field you have your Saurus bezerkers going loco, chasing routing troops on the field while you desperately try to redirect their energies elsewhere. On the other you might have Pteradon riders, colossal regiment-wrecking dinos and a host of other cold-blooded marvels. And while the Elves and Dark Elves are a little more conventional, you still get your dragons, brutal cavalry shock troops and some brutal artillery units to play with. If you want Lord of the Rings-style spectacle with an exotic twist, TW: WH2 delivers.

What’s more, Creative Assembly has got better at developing exciting, cinematic, multi-stage quest battles, playable both within the new campaign and in a separate Battles mode. With specific terrain, objectives and units to contend with, these give you something different from the less orchestrated battles of the main campaign, which can grow samey after a while, and go some way towards allaying any suspicions you might have that Warhammer might actually be a better fit for a less complex Dawn of War-style RTS. 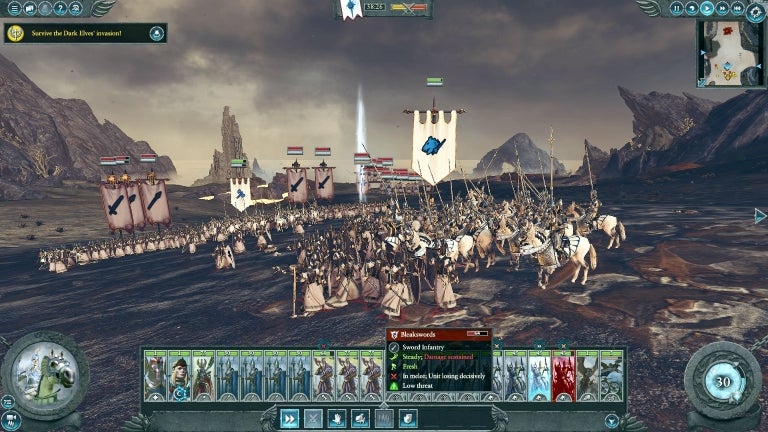 Like the first instalment, then, TW: WH2 delivers a strategy game of richness, depth and real complexity. The downside for some will be that this involves a huge time commitment – a single run through the campaign could easily take upwards of fifteen to twenty hours – and the mastery of a lot of different mechanics. I’d argue that the first point is part and parcel of this style of game, and that you’d be surprised how quickly ‘one more turn’ syndrome kicks in, and a quick two-hour session turns into a bit of all-nighter.

As to the second point, Creative Assembly has worked hard on making TW: WH2 accessible. Not only are there very helpful tutorials embedded within four of the eight different campaign factions (with the other four offering a variant based on the same race), but the excellent system of reminders and notifications helps make sure you don’t miss trouble brewing in a city, an opportunity for construction or the chance to move an army at a crucial time.

In fact, the only real frustration is that it can be tough work fielding and supporting the armies needed to keep pursuing the game’s different objectives, all at once. In my first game, playing the Elves, I was continually running out of cash, meaning I couldn’t maintain my forces enough to keep expanding and I missed opportunities to gather ritual currency, leaving other factions to chase the ritual prize. Starting a second game as the mighty Lizardmen I’d learnt from my mistakes, but still found it hard to field three good-sized armies, fight Skaven to the North and South and quell regular unrest in my conquered cities. What’s more, activating a ritual seems to bring a whole ton of trouble down on your head, to the point where you wonder if it’s in your long-term interests to do so.

This is one game where you need to keep a lot of plates spinning, which is where the option to play the campaign in online co-op, with both players playing the same faction, could make all the difference. This comes along with options for online battles, including a new all-against-all four player option, though I haven’t had much time or opportunity to try this out pre-launch. 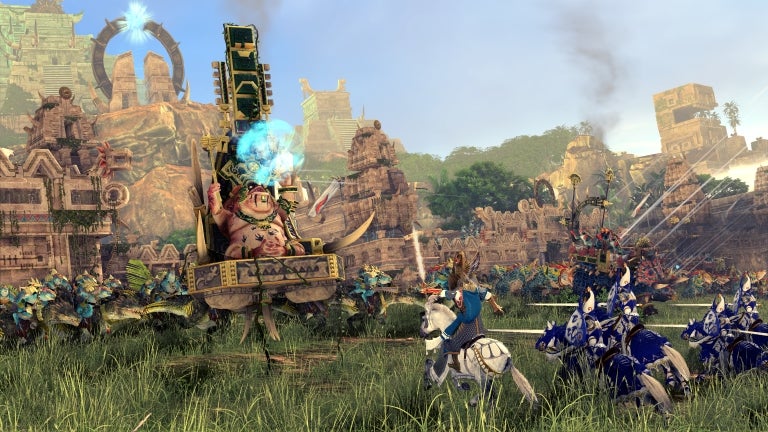 Owners of the first chapter should also be aware that a free update coming later this year promises to unite both campaign maps in one larger grand campaign. Frankly, I’m not sure I could cope with that, but seasoned veterans who make it through the wealth of existing factions may love the chance to take the world on at an even bigger scale.

Think of it less as a sequel to Total War: Warhammer, more a second chapter with a different pace and style. This one makes even more of the hybrid gameplay that made the original so exciting, with new races and additional mechanics that freshen up the campaign even for those who played through the first campaign with several different factions. Despite more work on accessibility, this is a dauntingly vast and complex strategy game, but it’s one with an equally huge sense of fun.