Available October 17 on PS4 (version tested), Xbox One and PC

Ubisoft has created the ultimate South Park experience. The Fractured But Whole is outrageous, shocking and absolutely hilarious. It’s Trey Parker and Matt Stone at their ludicrous best, and fans of the show will be in their absolute element. In terms of the game side of things, it doesn’t match the quality of the actual entertainment in the script or the set pieces, with simplistic mechanics and annoying bugs getting in the way.

South Park has always comfortably had “the line” in its rear-view mirror, but even to someone who has seen every episode of the show, there were moments in The Fractured But Whole where my mouth was agape. This isn’t for the easily offended, as the game tackles race, police brutality and makes liberal use of the n-word, and this is all within the opening few hours. It helps that the series is known for its shock value, and if the jokes weren’t as superbly crafted as they are here, it’d be hard to handle for the vast majority.

Without spoiling too much, just know there’s something in here that will likely offend everyone, conforming to the South Park adage of everything is funny, or nothing is. 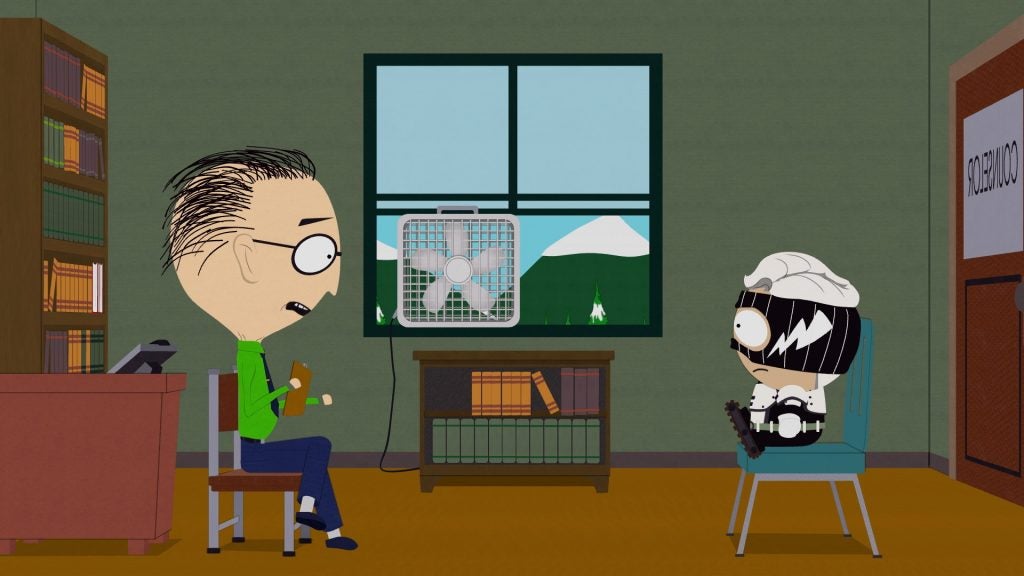 The Stick of Truth had plenty of memorable set piece moments that had players in hysterics, but TFBW improves upon this and then some. This is undoubtedly the funniest game I’ve ever played, and does an excellent job of allowing the iconic cast of characters to each have their time to shine. Randy Marsh – my personal favourite character in the show – doesn’t take long before taking his moment to prove once again why he’s such a beloved personality.

Thanks to the game’s long play time, there’s plenty of opportunity for everybody’s favourites to make an appearance, from Towelie to Crab People to Sea Man and Gay Fish. If you’re a South Park nerd like myself, each appearance will make you laugh, because they’re handled so well.

The game is littered with in-jokes for fans, every TV plays something that’ll make you chuckle, like hearing the Cash for Gold rip off show, or dueling against Sheila Broflovski with “Kyle’s mum’s a bitch” as the soundtrack. These little touches make all the difference in making this the definitive game of the show. 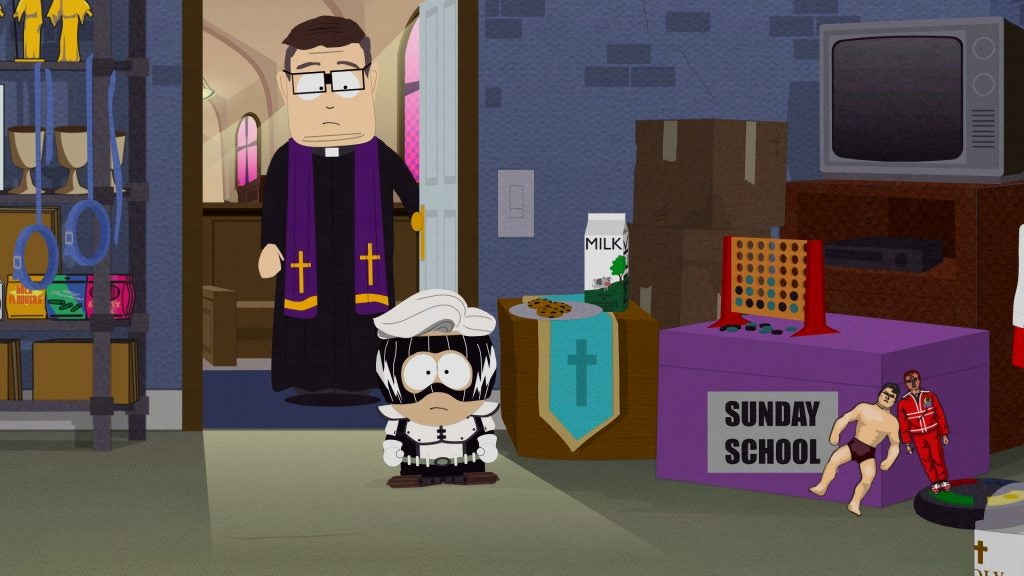 Fractured But Whole improves upon its predecessor in plenty of other ways, too. Firstly the combat is far more enjoyable. While still remaining turn-based, battles now take place on a chessboard-style plane. Placement of heroes, balancing your own powers and choosing which allies you bring on the field all play a part in the new, more complex system. Throughout the game you’ll also unlock more heroic abilities to add to your repertoire, keeping the moveset and, therefore, combat interesting.

However, while offering more depth than Stick of Truth, it’s still pretty simplistic compared to other RPGs. However, this is a good thing, considering this is a South Park game. I appreciate the fact it’s not bogged down by overly-deep systems and allows me to just enjoy the town.

The same is true for the character development and crafting systems. RPG aficionados will likely find them boring and as deep as a puddle, but again it allows you to spend more time exploring the town and completing side quests, of which there are now plenty more to do. 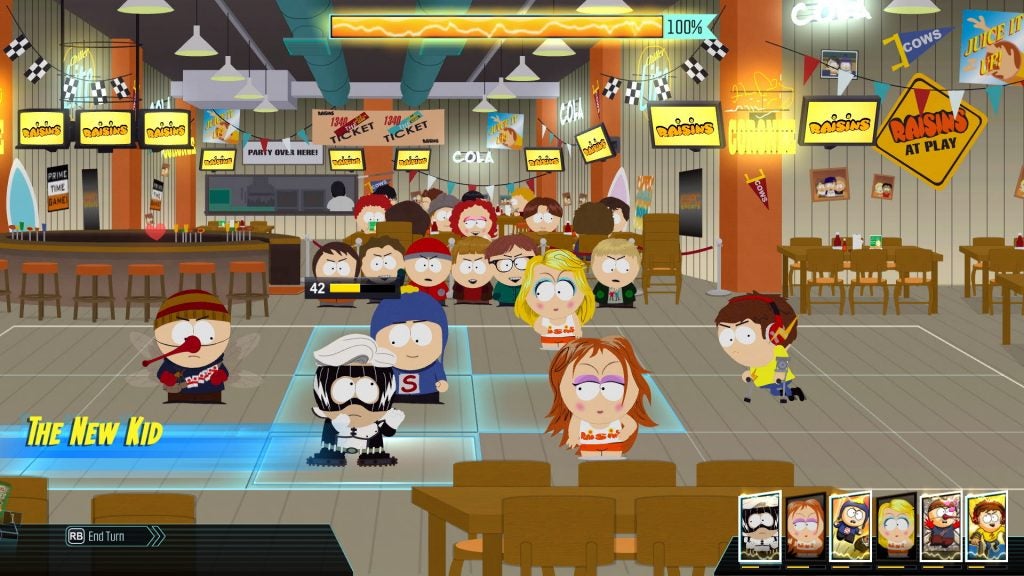 A problem with Stick of Truth was that, between the core missions, there wasn’t much to do, but this has been rectified in the sequel. The kids now communicate using mobile phones, and because of that you’ll see your phone screen pop up much more frequently with heroic requests.

However, the majority of these aren’t fetch quests, but isolated stories. Even those that are simple fetch quests will be better than those seen in other games, because they include the super South Park comedy. Rescuing Big Gay Al’s Big Gay Kittens is accompanied by Al messaging you on Coonstagram with something that’ll make you chuckle for every cat you save.

Coonstagram, the new social media app within the game, acts as your ‘rep’ within the game, improved by taking selfies with the people of the town, and you can also see comments people share with each other and what is being said between people. The trouble is the feature feels entirely throwaway for the vast majority. Selfies feels like a tick box exercise, and while the comments people post can be entertaining, being unable to interact with them at all as the mute protagonist means they’re very easily ignored. 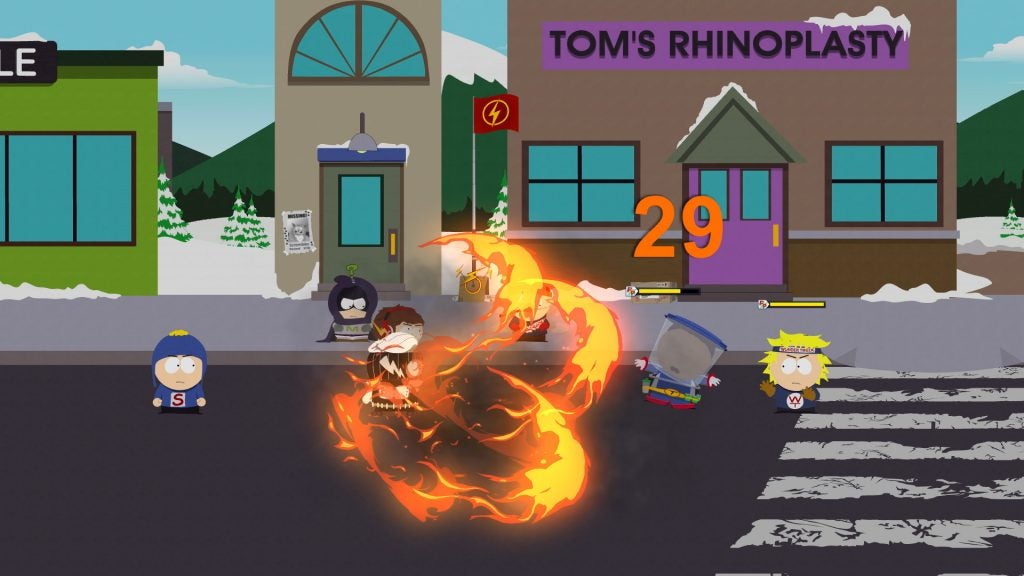 The power of your hero’s bum also returns, though this time has evolved to included time and space-bending systems. Rather than using your flatulence to dish damage, instead there are new abilities which can be used in and out of battle. In a fight, you can reverse time to undo an enemy turn, or pause it to dish out free hits outside of your turn. Complete a side quest and you can even summon a past version of yourself to join the fray.

Between battles, you can use your hero’s ass to team up with allies to unlock new areas. Join the Human Kite to reach new heights, or fart in the face of Captain Diabetes to summon his unbridled Diabetic Rage to tip over blockades. There are others later in the game, some involving things lodged right up there, but I won’t spoil them here. Let’s just say the new systems make for far more entertaining exploration than in The Stick of Truth and leave it at that.

Also, it has to be noted that the game suffers from annoying bugs and glitches from time to time. Only one has forced me to reboot the game (a stuck loading screen), but I’ve also had every character on-screen talking at once, two Mrs Cartman’s, characters popping up from nowhere, and the screen hanging while I’m issuing a command. Hopefully these are fixed in an early patch, but right now they’re a nuisance rather than game-breaking. 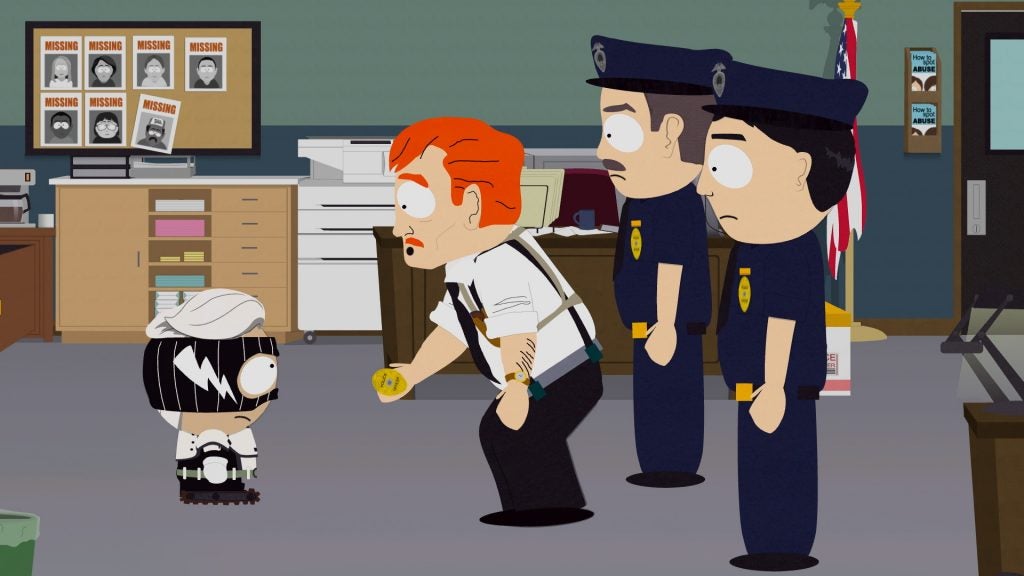 If you’re a fan of South Park, The Fractured But Whole is an absolute no-brainer. This is the definitive South Park video game, jam-packed with the brilliant humour that makes the show the best around.

However, if you’re coming to this as a gamer and RPG fan first, it will probably lack the depth and complexity you’re looking for. Combat is fun but relatively simple, the RPG mechanics are shallow and its relatively slow pace is likely not for everybody.

But I imagine the majority of people will come here for the show, and will undoubtedly not be disappointed. It’s hard to put into words just how outrageous this game gets at times. It’s incredibly entertaining, just leave your morals at the door and prepare for unbelievable laughs.