Toshiba has had a mixed record with its netbooks. Its very first, the NB100, arrived just as everyone else was moving to the 10-inch form-factor and looked dated as a result. However, it returned triumphantly to form with the NB200, and the refreshed NB305 was also very good. Now we have the NB250, which is identical in shape and size to the NB305 but cheaper.

It really looks it, too. While the NB305 looks rather smart in its silver and brown garb, the NB250 is awash with cheap, nasty looking black plastic. It’s all rather unappealing, though the build quality is still very good, and it’s a nice slim and light machine, weighing just 1.12kg.


Some of this lightness comes from the three-cell battery of our review model, which doesn’t bode well for battery life. Strangely, though, this model (the NB250-107) is only £10 cheaper than the near identical six-cell version (the NB250-108), making the latter something the obvious choice and the former look like rather poor value. 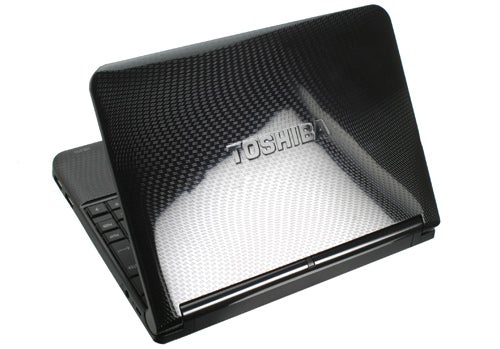 On the hardware side of things, the NB250 is like most other netbooks. There’s an Intel Atom N455 processor, 1GB of RAM and a 250GB hard drive, and it runs Windows 7 Starter Edition. While the Starter Edition of Windows isn’t the bespoke netbook OS we’d like, on its own it runs fast enough and does the job. Regrettably, Toshiba has loaded the NB250 with far too much bloatware, much of which gobbles up system resources needlessly. A purge will be the first order of business for most users.


Basic connectivity is…well…basic. You get the usual three USB ports, a VGA video out, an Ethernet port, two audio jacks and a memory card slot. You can use SD cards up to 32GB in capacity, which more than suffices. Unlike the NB305, however, none of the USB ports feature standby charging. Not the end of the world you might argue, but a good example of what you’re missing in this cheaper version. 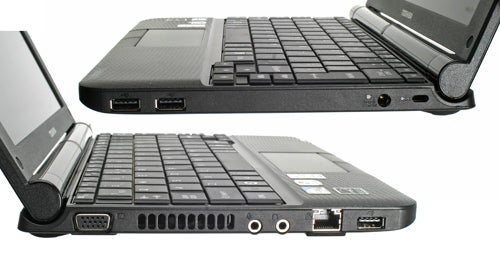 Also missing on this machine is Bluetooth, but Wireless-N Wi-Fi is present and correct. Most people can probably live without Bluetooth, too. Nestled above the screen is a VGA webcam, which works perfectly well. We can do without Toshiba’s webcam dock, however, which is a permanent fixture on the left side of the screen and pops open when your cursor goes near it.

One of the more disappointing aspects of the NB250 is its keyboard. Unlike the NB305 it doesn’t have isolation keys, and depending on your point of view on such matters this could be deemed a good thing. However the replacement is rather poor thanks to the mushy, shallow keys and a noticeable rattle in places. It’s far from a disaster, especially as the layout is acceptable, but we’ve seen plenty of better netbook keyboards. 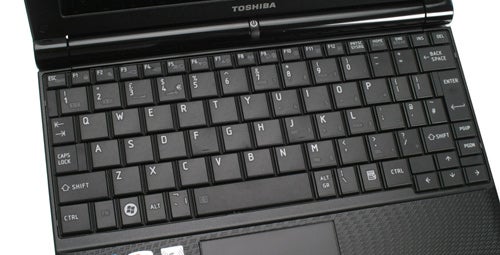 By contrast the touchpad, typically a strength of Toshiba’s netbooks, is extremely good. It’s larger than those of many competitors, and the touchpad’s buttons offer excellent feedback.


Another encouraging aspect of the NB250 is the screen. Though it does have a glossy, reflective finish, it produces nice colours, is exceedingly sharp and has decent viewing angles. Even its black level is quite good, making it a good choice for watching videos on the move. It’s just a shame the reflective finish limits its scope somewhat. Just be sure to have a set of headphones or speakers to hand, as the NB250 only has one speaker and it’s not very good. 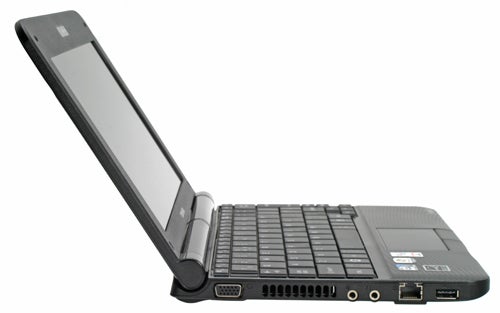 In general the NB250’s performance is netbook like, meaning it’s on the slow side but fast enough for general web browsing, productivity and basic media playback. Unlike previous Intel Atom platforms this new one can handle 720p video in some instances, but its performance isn’t reliable enough to our minds to call it HD capable.


As a general point we’d encourage everyone to investigate Linux netbook operating systems, such as Ubuntu Netbook Edition or Jolicloud, if you find the performance not to your liking. Not only are they faster, their interfaces are better suited to a netbook’s screen resolution. Don’t be scared, it’s a lot simpler than you think. 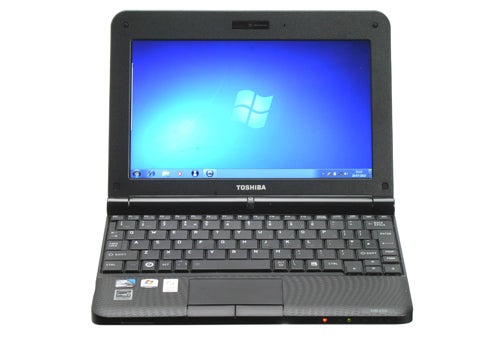 No change of operating system will rectify the NB250’s lack of battery life, though. Running a standard definition video at 50 per cent brightness resulted in just two and a half hours of life, which is way below average for a netbook of this price. It’s just as well the six-cell version is only a few pounds more really, though that doesn’t explain the price of this version.


Provided you opt for the similarly priced six-cell NB250, it will serve you well-enough. However, with so many excellent netbooks to choose from, it does little to distinguish itself from the pack.