Compared to the rest of the technology world, progress in the Intel-based netbook market can at best be described as conservative. Since the original Atom processor made its way into netbooks (with the award-winning Eee PC 901 20G), it seems very little has really changed. Atoms have gone dual-core, but still run at the same – or even a slower – clock speed, there is still no digital video output, and in general Full HD video playback is still not on the menu. Of course Nvidia’s ION solution (as found on the Samsung N510) did a lot to address this, but we haven’t seen it in as many netbooks as we would like. Asus’ new Eee PC 1215N changes all this.

Asus hasn’t been at the cutting edge of netbooks as it once was, but now the company is once again out in front with a netbook that not only features ION2 graphics but also a new, faster 1.8GHz dual-core Atom, and doubles the usual paltry 1GB of RAM to a far more useful 2GB. With a HD Ready screen to enjoy the benefits on, is its new Eee PC 1215N the best netbook ever?


It’s certainly the most powerful Intel-based netbook we’ve encountered. The N525 Atom CPU should handle Full HD Flash video and multi-tasking with ease, while ION2 will let you play smooth 1080P, high-bitrate video, accelerate some applications and even play undemanding 3D games (though not in ‘true’ 3D like the recently-reviewed Acer Aspire 5745DG). 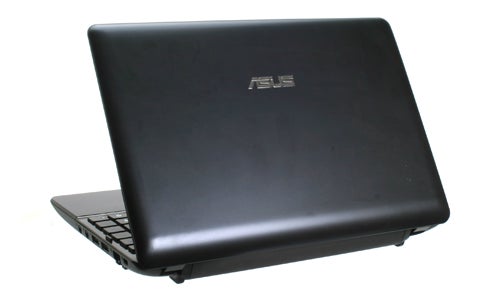 2GB of RAM helps significantly in all of these scenarios and indeed with most usage. Another significant advantage the 1215N enjoys is that rather than the hobbled Windows 7 Starter, it comes with the full-fat Windows 7 Home Premium – so just for starters you’ll be able to change desktop background at will. Thus all the weakest areas of the average netbook have received a shot of nitro.


Only the 5,200rpm, 250GB hard drive is bog-standard. It’s supplemented by a generous 500GB of online storage, but this is only a one-year trial, after which you have to pay for the service.


Connectivity isn’t as inspiring as this Eee PC’s specifications, since USB 3.0 is optional on the 1215N and hasn’t yet made it to the model available in the UK – if this is an essential feature for you, Asus’ Eee PC Seashell 1015PEM is still one of the few choices out there. 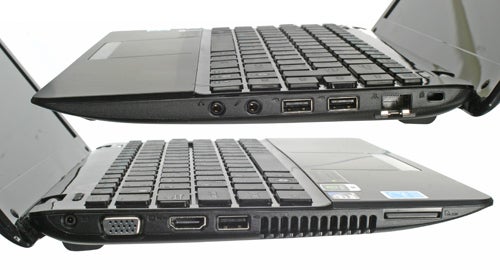 However, when it comes to video outputs the 1215N is certainly a cut above, as in addition to the analogue VGA output found on most netbooks it sports an HDMI output courtesy of ION2. This will of course allow you to output Full HD video digitally to a television or monitor.


Aside from these you’ll find three USB 2.0 ports, a memory card reader supporting SDHC and MMC, 3.5mm headphone and microphone jacks, and an Ethernet port. The wireless front is well-covered by both Bluetooth 3.0 and Wi-Fi N.

Unsurprisingly, the 1215N takes a lot of inspiration from Asus’ stylish and slim Seashell range. It certainly makes a sleek impression thanks to its clean lines and tapered edges, and is overall quite stylish.


Thankfully, the company appears to have listened to our incessant complaints regarding glossy lids, and the finish used here is semi-matt. While it still picks up fingerprints, it’s not nearly as bad as the shiny print magnets found on the majority of portable machines. Thanks to a lovely, almost soft-touch feel, it’s also much nicer to hold. 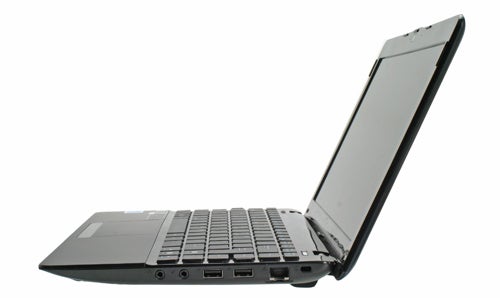 Opening this Eee PC up, the screen bezel and keyboard surround might be glossy, but the palm-rests and touchpad are finished in a single piece of the same soft plastic as the lid. This not only looks great but is ergonomic, and the pad’s flush chrome delineating strips and buttons add the finishing touch to this attractive combination. Our sample is all-black, but the 1215N is also available in muted brown, grey or red.


As you would expect from a netbook costing over £400, build quality is generally solid – with the unfortunate exception of the keyboard area, which displays an alarming amount of flex. So much, in fact, that it may become an issue for touch-typists who hit their keys firmly, as it adds unwanted feedback and an annoying rattle.

This is even more of a pity as, without this issue, the keyboard would actually have been very good. Layout is spot-on with all keys and shortcuts where you would expect them. Key size and spacing also work well, and feedback for individual keys is both springy and surprisingly deep. Last but not least, the large touchpad rarely interferes with typing.


The multi-touch touchpad itself is an absolute pleasure to use. Its soft but smooth surface is one of the most tactilely satisfying we’ve used and it’s very responsive. Though its buttons are integrated into a single rocker switch, there is no dead zone, a feat most manufacturers fail to achieve. Sadly, the shine gets taken off by the buttons being far too stiff for comfort. 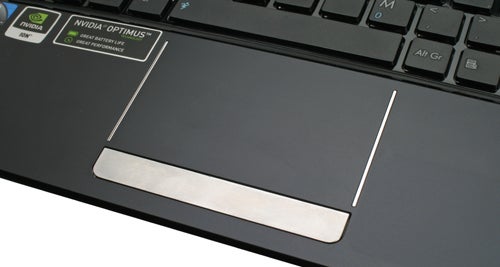 Getting to the 12.1in screen, compared to the humdrum 1,024 x 600 resolution we usually find, the 1215N’s 1,366 x 768 gives you far more breathing space. Not only can you play 720p video without any cropping or downscaling, but you have far more room for work and play. We only wish this resolution was standard across the netbook board, as the Dell Inspiron Duo is only one of the few recent entries to feature it.


Unfortunately the display features a reflective, glossy coating, though this does help perceived contrast and colour saturation. In fact, blacks look black and dark detailing is quite good, with only the darkest two shades virtually indistinguishable. Meanwhile, white purity remains surprisingly intact. Colours are vibrant but not unrealistically so. Backlight distribution is even, though there is some very minor light bleed from the bottom and right-hand sides. There’s also little to no sign of banding or other artefacts.

While that’s all very positive, vertical viewing angles are very poor, meaning you’ll need to open the screen to its maximum in order to get the most out of it. Horizontally, things are considerably better, but you’ll still want to sit as centrally as possible. Overall, we’d say the 1215N’s screen is above average, and its high resolution makes it an absolute pleasure for productivity.

Unlike its screen, the Eee PC 1215N’s audio performance is somewhat sub-par, and Asus doesn’t do its stereo speakers any favours by placing them at the bottom of the netbook, where putting them on a bed or on your lap is likely to muffle them. Even on a flat surface there is distortion at maximum volume, which is very audible but by no means room-filling. In fact, a lot of it comes across as distinctly cramped and muddled, lacking in presence, clarity and bass.


When it comes to performance, you would be forgiven for thinking the 1215N is not a netbook at all. Dropping it in at the deep end, we played a 1080p Flash video, which is enough to bring your average Atom-powered machine to its knees. However, this Eee PC played it back full-screen without a hint of stutter.

We decided to up the stakes, and ran the Flash video again – with a 720p .MOV trailer running in the background, and with video acceleration disabled. Flash was smooth and the trailer stuttered occasionally but was watchable, which is very impressive.


High bitrate 1080p can still be a problem for the CPU, but that’s where Nvidia’s ION2 takes over. Basically, for daily use there’s almost nothing the 1215N can’t handle, which immediately puts it in a whole different ballpark to most netbooks. However, as you can see it just can’t match up to AMD’s competing NEO processor, of which the 1.3GHz K325 is found in the Dell Inspiron M101z.

Gaming is just about possible, but only at very modest settings on undemanding titles. In our standard TrackMania Nations Forever test this Eee PC managed only 22.6 frames per second, which is barely playable and no great improvement over Nvidia’s original ION graphics, though it’s still superior to Intel’s integrated graphics on most Atom machines. Interestingly, it gives very similar performance to AMD’s ATI Mobility Radeon HD4225 which supports its NEO CPU.


With a weight of 1.4kg, this netbook stays well within the ultra-portable category and is significantly lighter than Dell’s (admittedly more powerful) Inspiron M101z.


Battery life is on the good side of average, though this is partly due to Nvidia’s Optimus ensuring that Intel’s frugal integrated graphics are used whenever appropriate. Its 5,200mAh, 56Wh battery should give you around seven hours, and managed a decent six hours and 40 minutes in our battery test, running a looped video at 50 percent screen brightness. 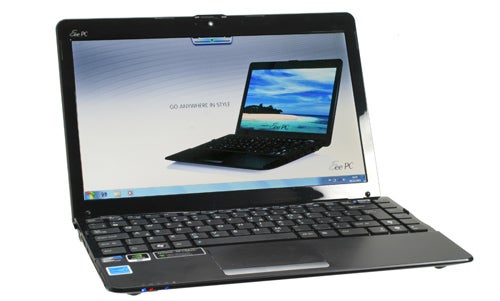 Overall then, we have an impressive machine. Its performance is comfortably superior to other Intel-based netbooks (though AMD’s platform still rules supreme here) and battery life is good, but it’s let down by poor build in the keyboard area. However, the main problem with the 1215N is that at £430, it’s not just its performance that’s approaching laptop territory but its price as well.


If you truly can’t afford more, this EeePC bears consideration. However, if you can stretch to £500, the Inspiron M101z will be a better option for many, with double the RAM, a more competent CPU and larger hard drive making up for the shorter battery life. If you want something a little less conventional, the Packard Bell Butterfly Touch is also available for under £450. It’s not as light nor as powerful in the graphics department, but other specs are stronger and it offers tablet-like functionality with its swivelling capacitive touch screen.


Asus’ Eee PC 1215N is the most powerful Intel-based netbook we’ve tested, enhanced by an attractive design and great-feeling soft plastic finish. However, it’s let down by its poor keyboard and premium price tag, which puts it up against AMD’s NEO-based ultra-portables and even Intel’s own CULV machines. Though it certainly survives the encounter, it doesn’t come away unscathed.