Earlier this month we looked at the N230, a Samsung netbook which set itself apart from the rather crowded competition – not to mention a multitude of siblings – by sporting a claimed 13-hour battery life. However, aside from its longevity, Bluetooth 3.0 and SDXC support, there was little that made it stand out; even the design was classy but hardly revolutionary. However, the NF210 is something a little bit different.

You’ll notice as soon as you see it that this netbook looks nothing like any other of its kind, and Samsung is certainly entitled to describe the design as unique. It utilizes In Mold Rolling (IMR) for a dramatic curve in the edges, a wave which ‘crests’ on either side and pushes the lid into a sympathetically concave shape when viewed from the side.


The ‘wave’ is accentuated by contrasting use of glossy white plastic on the outside, and a mixture of shiny and faux-brushed-metal blacks on the machine’s inside, offset by faux-chrome trim. It gives Samsung’s latest an organic feel, evoking a hint of playfulness that’s often been attempted (like with the green trim around the Acer Aspire One D150‘s power button) but rarely succeeds. It makes for a surprisingly refreshing change that’s at worst quirky and at best stylish. 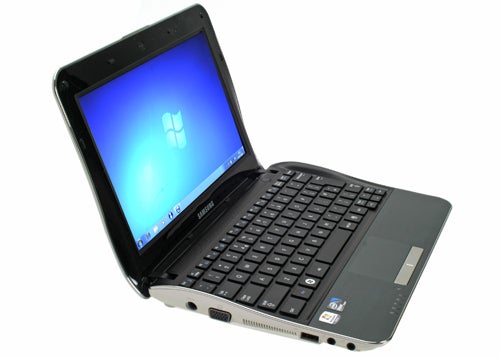 (centre)Pictures just don’t do justice to how curvy the NF210 looks in the flesh, especially that twist on the lid’s side.(/centre)

Unfortunately the glossy outer shell is just as dust, scratch and fingerprint prone as ever, but these are not as visible on white as on the usual piano black. Thankfully, though the screen features a glossy bezel, its coating is matte, meaning no distracting reflections when looking at dark material on the NF210. The palm-rests are a mixed blessing, as their faux brushed metal material also picks up fingerprints, though they’re only visible from an angle.


Its design isn’t the only thing that sets the NF210 apart though, as it’s also one of the first netbooks available to sport Intel’s new dual-core N550 Atom processor. This features two 1.5GHz cores, which in terms of raw clock speed is a step back from the 1.66GHz N450 found in most netbooks, not to mention the 1.83GHz N475 we saw in the Aspire One 533. 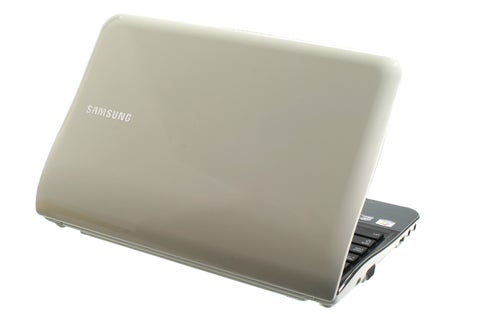 However, as with proverbial heads, two cores are better than one. With Hyperthreading support for up to four virtual cores and a still modest maximum power draw of 8.5W (compared to 5.5W for the N450 and 6.5W for the N475), this is certainly an interesting chip. Regrettably you still won’t be able to run Full HD (1080p) video smoothly, but for productivity the N550 offers a noticeable advantage and HD Flash video (such as YouTube HD) is now viable, though by no means always smooth. 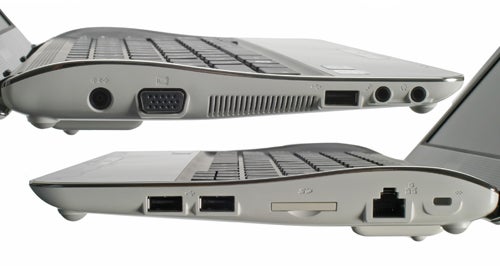 Remaining specifications are back to familiar territory: integrated low-resolution webcam and microphone; a sparse 1GB of memory; CPU-integrated graphics; a 250GB, 5,400rpm hard drive and a topping of Windows 7 Starter. Likewise on the connectivity front, you get three USB 2.0 ports, a VGA video output, 3.5mm headphone plus microphone jacks, and an SDXC memory card reader. Networking is handled by a non-Gigabit Ethernet port and Wi-Fi N, with Bluetooth 3.0 also on board.

Though nowhere near as solid as its rugged NB30 or even the more solid N230, Samsung’s NF210 offers decent build quality, with only a little creak near its centre and just a tad more flex on the bezel than we would ideally like. Weight is par for the course at 1.25kg. 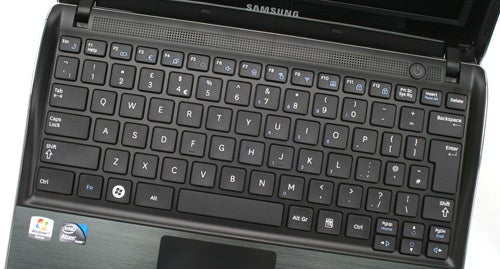 The isolation (or ‘island’, as Samsung prefers to call it) keyboard looks identical to that found on the N230, meaning it’s attractive, well laid out and sports intelligent secondary functions. However, it doesn’t handle the same: keys didn’t feel quite as small, but neither was feedback as good, and despite a nice, crisp response, travel is too shallow to make typing truly comfortable. Things aren’t helped by the slight slope which makes your palms rest uncomfortably on the netbook’s edge, similarly to Acer’s Aspire One 533.


On the other hand the sensitive multi-touch touchpad acquits itself well, featuring a smooth finish that loves fingerprints but feels great, and two similarly burdened but eminently usable chromed buttons. Our only complaint here is that, despite how different their respective finishes may look, the pad and its surroundings feel the same, and this lack of delineation can be problematic under certain circumstances.

As can be said of the screens adorning most netbooks, the 10.1in, 1,024 x 600 effort here is decent but nothing special. We do applaud Samsung for leaving off the glossy coating that makes many displays such a nightmare to use with ambient lighting or in sunlight, but at the same time it does mean colours lack that extra punch and perceived contrast is somewhat lower. You’ll get a fair amount of dark detailing at the cost of white purity, with excellent sharpness and no hint of backlight bleed. However, viewing angles are certainly not a strong point.


Audio quality is a small step down from previous Samsung efforts. The NF210’s 1.5W speakers produce a fairly impressive volume level (for a netbook), but suffer from a lack of clarity in fine detail, tinny bass and noticeable distortion at their maximum. 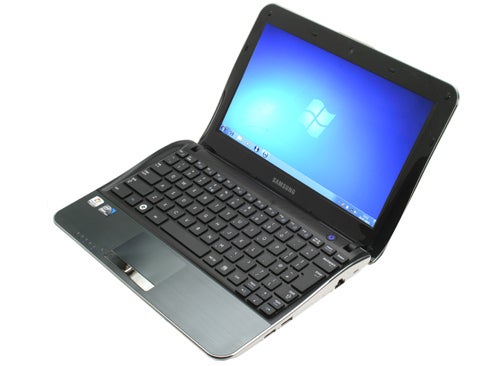 While Samsung’s claims for battery life aren’t up to the 13 hours attributed to the N230, with a more conservative 10-hour estimate instead, we found the NF210 lasted almost as long. It has a high capacity 7.4V, 48Wh/6,600mAh battery, giving us just under eight hours in our standard netbook test, which loops a video with wireless disabled and screen brightness at 50 percent. With less intensive use, Samsung’s figure is plausible.


Though it’s decent value for what you’re getting (especially compared with Samsung’s previous N230), we do feel the NF210’s £330 price is on the high side. This is especially so when you consider that for many, the end user experience won’t be markedly different from the £230 Acer Aspire One D260 or even the 1.8GHz Aspire One 533, which has now come down to £260. However, Samsung’s first entrant in the NF range does offer a combination of more power and excellent battery life, so if its design particularly appeals it might be worth the premium. Just keep in mind that many other dual-core N550–based netbooks are coming to market as you read this.


Samsung’s NF210 impresses with a dual core Atom CPU and high capacity battery, but its unique design is what really sets it apart. However, it’s still a netbook at heart, so with a price tag of £330 it won’t be for everyone.