Watching 3D on the 84L9363DB is a never less than spectacular experience – though it is also flawed.

The sheer impact of seeing 3D on an 84-inch screen is a revelation if you’ve only previously seen it at a much smaller size, as the way it fills your field of vision enables you to be immersed in the action to a degree just not possible with anything smaller.

Aiding this sense of immersion further is the genuine full HD resolution of the 3D pictures, as the 4K resolution puts back the horizontal resolution usually lost by passive 3D’s onscreen filter to let you see every line of a 3D Blu-ray’s images in a way not possible with normal 1920×1080 passive 3D TVs.

Being able to see this full HD resolution together with the lack of crosstalk ghosting and flicker that you usually have to suffer to some extent with rival active 3D technology is a revelation if you haven’t seen it before.

To be clear, the 84L9363DB’s 3D pictures don’t look as detailed and ‘dense’ as those of active 3D 4K TVs like Samsung’s F9000 series. But it’s easy to understand people happily trading the extra resolution of active 3D sets for the relatively relaxing sensation of watching passive 3D on this Toshiba.

It does no harm to the 84L9363DB’s 3D impact, either, that its pictures retain plenty of brightness and colour vibrancy despite the slight dimming impact of the glasses, while the same dimming effect also mutes the screen’s contrast shortcomings, helping the screen delineate a believable and well-organised sense of depth and space.

So what’s the flaw? Motion. Without the provided 3D judder cancellation option switched in there’s a rather stuttery, even occasionally flickery look to motion with 3D content. Yet if you do activate the judder cancellation system, while the judder reduces massively you get instead a regular shimmering effect around moving objects. This can be almost as distracting as the judder, especially as it’s joined by the audio lag mentioned earlier.

In the end the audio problem in particular made using the judder cancellation system pretty much impossible for us, so while we still enjoyed 3D on the 84L9363DB overall, it’s not quite in the same league as that of star 4K sets like Sony’s X9005A and Samsung’s F9000 sets.

The 84L9363DB is a reasonably potent audio performer, serving up a soundstage that’s richer (in terms of its dynamic range) and louder than might have been expected considering the set doesn’t use front-firing speakers.

The mid-range is open enough to leave voices sounding realistic and clear even during action scenes, and vocals seem locked to the screen rather than sounding as if they’re appearing from somewhere off to the side as can happen with very large TVs.

The 84L9363DB is light on treble detail subtlety, and doesn’t know its limitations – by which we mean that it can be pushed so hard that the soundstage starts to distort and fall apart. But overall we still felt the set’s speakers were at least good enough to sound like an adequate accompaniment for the scale of the images they’re supporting.

There is a separate audio issue, though: lip synch. For as we’ve mentioned in the picture sections of this review, if you attempt to use the TV’s motion processing – Clear Scan with 2D, Judder Cancellation for 3D – the soundtrack sometimes slips out of synchronisation with the video feed, leading to some pretty much unwatchable lip-synchronisation errors.

This won’t be an issue for the sort of enthusiast who hates motion smoothing processing on principal, but with 3D in particular, not being able to use any de-judder processing does present problems of its own.

If you’re thinking of indulging in some king-sized gaming on the 84L9363, we’ve got good news: our tests revealed just 39ms of input lag. This is low enough to mean your gaming skills shouldn’t be badly harmed at all by any delays in the Toshiba 84L9363DB producing its pictures.

On a less positive general note, our test sample proved a bit buggy, causing us to have three or four crashes when either switching between inputs or trying to navigate its Cloud TV menus. 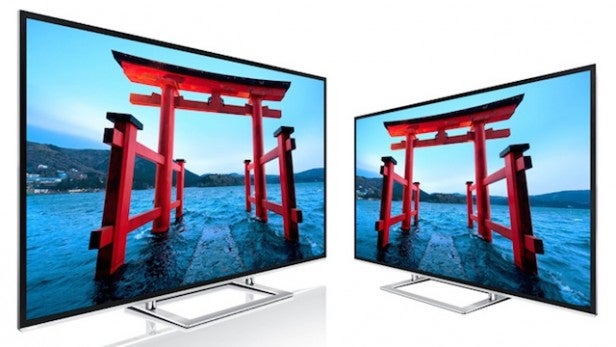 We’d hoped that the Toshiba 84L9363DB’s price would make it more or less irresistible to well-heeled AV fans looking for a serious next-gen home cinema thrill. And to be fair, there are times when the 84L9363DB lives up to these hopes. However, some pretty significant weaknesses in the contrast department ultimately undermine its prowess elsewhere, and prove that having a 4K native resolution doesn’t automatically make you the best TV in the world (though it undeniably gives you a head start!).

It’s hard not to think that you could get the sensational, award-winning Sony VW500 projector and its even bigger 4K pictures for only a little more than the 84L9363DB. And if you can live with a much smaller screen there are terrific 65-inch 4K sets out there such as the Sony 65X9005A and Samsung UE65F9000.

To be fair, though, if a TV suits your needs better than a projector and you’ve just gotta have more than 80 inches with your next 4K TV, then the 84L9363DB really doesn’t have any competition at anywhere near the same price point.

The Toshiba 84L9363DB deserves our gratitude for surely blowing wide open the pricing for giant 4K TVs. And in many ways it delivers a performance that belies its ground-breaking cheapness. In the end, though, it’s ultimately let down not by its handling of 4K but by problems coping with something much more traditional: contrast.