The Toshiba 84L9363DB is one of the most exciting TV prospects to appear on our test benches in recent times. Why? First its screen is 84- inches across. Second, it’s got a native 4K/Ultra-HD resolution. And finally and most excitingly of all, it costs just £7,000… which is really very low indeed for such a large screen with a 4K resolution when consider 84-inch 4K TVs from Samsung and LG cost £35k and £15k respectively. It is, in other words, five times less than Samsung’s and half the price of the LG.

SEE ALSO: What is 4K TV and Ultra HD? 10 reasons why you should care 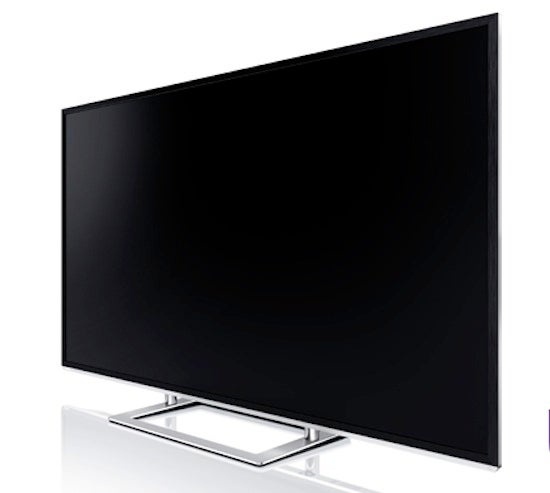 The 84L9363DB is a serious chunk of telly. Even though we’re now routinely facing down ever-bigger TVs on our test benches, the sight of an 84-inch screen still has the power to stop us in our tracks. And the huge screen acreage is surrounded by a good inch of frame to further the set’s impact on your living space.

This frame isn’t particularly glamorous overall, though the way the main black colour of the bezel contrasts with a silver metallic strip along the bottom edge and the use of a wide, two-post silver desktop stand certainly ensure Toshiba’s 4K brute can’t be called ugly.

Connections on the Toshiba 84L9363DB are comprehensive. Heading things up are four HDMIs, capable of handling both 3D and 4K/UHD source streams. The supported 4K/UHD streams do not currently include 50/60Hz native 4K, though. This support should be coming via a firmware update at some point, though there’s no firm date for this yet, and while Toshiba won’t be drawn on the precise details of how its set might overcome the 4K data bandwidth problems of HDMI 1.4 jacks, it seems likely that the 84L9363DB’s 50/60Hz support will come at the expense of a degree of colour resolution versus the full colour bandwidth offered by the HDMI 2.0-equipped Panasonic L65WT600.

When it comes to the multimedia support any high-end TV needs these days the 84L9363DB is again well-connected, with highlights including an SD card slot, two USB ports (which can be used for recording from the built-in Freeview HD and satellite tuners as well as playing back multimedia from USB devices), and both LAN and built-in Wi-Fi network options.

Covered extensively in our Toshiba Cloud TV review and distinguished by a handy second-screen electronic programme guide platform, Cloud TV is ultimately a disappointment compared with some of the latest rival smart TV platforms. Its interface is sluggish and its content levels are pretty limited, especially when it comes to the catch up TV and on demand video platforms that are the mainstay of any online TV platform. 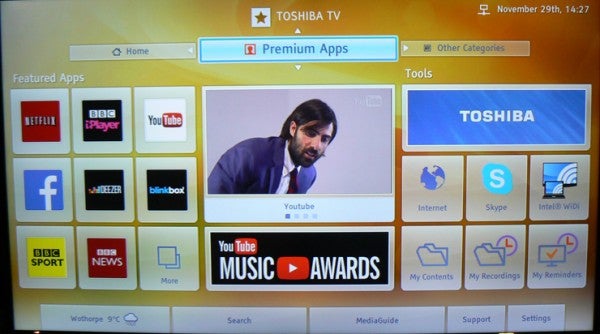 The 84L9363DB’s native 3840 x 2160 4K resolution is joined, as you would expect, by a powerful scaling system, the CEVO 4K Engine, for remapping HD and standard definition sources to the panel’s high pixel count.

Also of note are a couple of options associated specifically with the 4K processing, namely Fine Texture and Brilliance Restoration, both of which feature auto and manual settings.

Wrapping important features on the 84L9363DB up are its passive 3D system (with four pairs of glasses included free) and, of course, its price. The previous cheapest 84-inch 4K TV in town was the LG 84LM860V, which can now be had for around £15,000. So at just £7000 the 84L9363DB undercuts its nearest rival by an astonishing £8,000. This is one of the most remarkable price ‘achievements’ we’ve seen in the TV world, and the price gap to its nearest rival is comfortably large enough to potentially cut Toshiba’s 4K big boy some performance slack. So long as it’s not a complete dog’s dinner, of course. 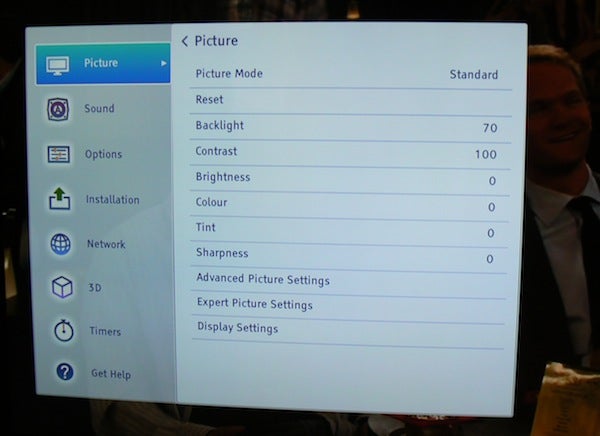 You could simply select from the 84L9363DB’s unusually wide and reasonably well thought-through set of themed picture presets and leave set up there. But if you’ve got the time and the confidence the flexibility is there in the Toshiba 84L9363DB to make pictures look pretty much exactly how you or industry standards like Rec 709 want them to look – at least from a colour perspective.

Sticking with the most important set up tools, make sure all noise reduction circuitry is off when watching native 4K and even, we’d argue, upscaled HD, to stop images losing resolution. As we’ll discuss further in the picture performance section, we’d also personally opt to set ResolutionPlus on with native 4K fare, with the rider that you may need to turn it off if a 4K source is unusually grainy.

Toshiba’s ClearScan motion processing system should be handled with care, as it can make pictures look a bit unnatural, especially on its higher settings. And it also seemed to us to be the cause of some lip synch errors with some sources.