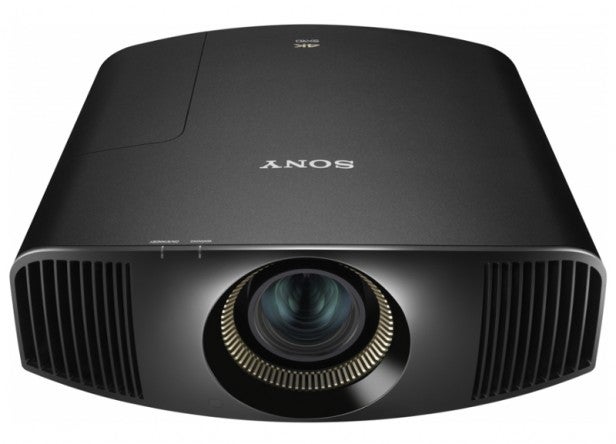 The VW500ES is an attractive mix of business and pleasure. On the business side its black colouring, bold venting grilles and startlingly large centrally-mounted lens smack of a product that’s going to take what it does very seriously.

However, the VW500ES is also considerably smaller than the Sony VW1000ES 4K 2012 debutante (thanks to Sony managing to essentially fold the optical path in half without compromising quality) and livens up the black finish with an unusual gritty texture that cunningly disguises the essentially slightly plasticky nature of the projector’s outer casing.

Also rather fetching is the gold striped circle around the lens, and the bodywork’s gently elliptical shape.

Connectivity is reasonably strong too, with two HDMIs and two 12V trigger ports leading the charge. But given that the Sony VW500ES sports a native 4K pixel count (more on this in a moment) the state of its HDMIs needs more scrutiny.

The first thing to say about them is that they’re not fully specced HDMI 2.0 ports in the same way that one of the HDMI ports on the recently tested Panasonic L65WT600 is. However, while the VW500ES’s HDMIs don’t support enough bandwidth to receive native 4K/UHD 50/60Hz feeds with 12-bit colour and full 4:4:4 chroma subsampling for the ultimate in colour accuracy, they do go beyond the HDMIs of the VW1000ES in at least being able to accept the 4K 50/60Hz feeds with reduced chroma subsampling of 8-bit 4:2:0.

The VW1000ES can currently only handle 4K up to 30 frames a second, and while Sony is offering to upgrade already-sold VW1000ES for wider 4K support, this upgrade requires a hardware board swap and is likely to set you back around two grand!

Having brought the VW1000ES into the conversation, it’s worth delving deeper into comparisons between Sony’s 4K debutante and its new kid on the block. Kicking off with the most important issue: price. For incredibly, while the VW1000ES costs nearly £17,000, the VW500ES will set you back just £8,800.

This is still hardly small change, admittedly, but halving the price you need to pay for a 4K projector in less than 18 months really is a staggering achievement by Sony. Especially as the VW500ES doesn’t seem heavily compromised in its spec versus its sibling.

This pixel count differs slightly from the 3840×2160 resolutions of pretty much every other 4K/UHD product, since they follow the Digital Cinema 4K spec. But this small discrepancy between the VW500ES’s native resolution and the resolution of most of the 4K/UHD sources we’re seeing so far doesn’t need to concern resolution purists, since the projector doesn’t use processing to rescale 3840×2160 sources. Instead it just doesn’t use the few extra lines available to its chips.

The SXRD chipsets in the VW500ES are built to a new standard, claiming an ultra-fast response time of just 2.5ms that could prove critical in ensuring that the gorgeous clarity of 4K isn’t reduced by motion blur.

To make double sure problems with motion reproduction won’t interfere with the VW500ES’s 4K clarity, Sony has also equipped it with the latest iteration of Sony’s Motionflow processing engine. As well as refined versions of previous Sony motion processing options, the VW500ES adds a new mode dubbed Combination, which essentially blends a couple of previous modes to give a more polished finish while also making motion look more fluid than it does natively without images becoming too processed. In other words, on paper the Combination mode could be a real winner. Naturally we’ll be looking at this more in the Picture Quality section.

The VW500ES impressively shares with the VW1000ES Sony’s Reality Creation system for upscaling HD and standard def content to the projector’s native 4K resolution. This engine proved startlingly effective on the VW1000ES, so there’s no reason to expect it won’t also deliver the goods on today’s cheaper model.

A further potentially great colour touch on the VW500ES that’s not available on the VW1000ES is a new Auto Calibration system. Colour levels can alter slightly in domestic projectors over time/extended use, so the VW500ES can be set to periodically automatically recalibrate itself via a built-in sensor to ensure you keep getting the strongest pictures possible even if you forget to do the occasional manual recalibration. 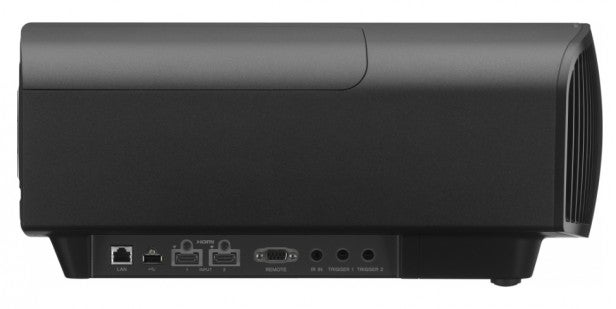 The VW500ES introduces one further significant new feature for Sony’s 4K projectors too: lens memory. Designed for people with 2.35:1-ratio screens, lens memory lets you store focus, zoom and shift settings for the projector for multiple source aspect ratios, meaning you no longer have to worry about adding a potentially expensive external anamorphic lens attachment to your home cinema rig.

At this point you might be wondering why Sony is bothering to continue to sell the VW1000ES when the vastly cheaper VW500ES actually seems better specified in some areas. So briefly, the arguments in favour of the VW1000ES are: 1) that it uses a more expensive and thus potentially more precise glass lens system (though Sony is keen to stress that the VW500ES’s plastic lens system is still very high-end for its price point); 2) that it claims a 1,000,000:1 dynamic contrast ratio versus 200,000:1 from the VW500ES; and 3), that the VW1000ES supports the Digital Cinema Initiative colour space while the VW500ES ‘only’ supports the RGB colour space. Though you could argue that the VW500ES’s RGB space is actually better suited to typical home installations/sources.

One last feature of the VW500ES we haven’t touched on yet is its 3D playback. Inevitably (since it doesn’t carry a twin optical system) this is of the active 3D variety, with the necessary RF transmitter built into the projector’s bodywork. This introduces another positive difference between the VW500ES and the VW1000ES, since the more expensive model uses an occasionally problematic IR 3D transmission system instead.

It’s a pity you don’t get any free 3D glasses as standard with the VW500ES, but we guess we can bear this given how remarkably affordable it is compared with anything 4K that’s gone before. Also, the shift to an RF system means the VW500ES complies with the recently established 3D glasses standard, so you could use other compatible brands of RF glasses if they’re cheaper than Sony’s own.

The Sony VW500ES is very easy to pair up with your screen thanks to such features as a motorised 2.06x optical zoom, motorised vertical and horizontal image shifting, and a motorised focus system that allows for very fine adjustments. Its RS232, RJ45 and IR-in terminals sockets also mean it’s relatively easy to add to a full, centrally controlled home cinema installation.

There are a huge selection of picture fine tuning features within the VW500ES’s menus, most of which can yield subtle benefits if you choose to explore them. The only features we want to mention here, though, are the noise reduction, motion processing and dynamic iris options. And what we most want to say about them is that you’re generally best advised to leave the first two set completely off, certainly for native 4K and upscaled HD viewing, while the latter can cause problems we’ll discuss later if you leave it set higher than its lowest powered setting.