As usual with a 4K TV test, we’re going to focus first on stuff specifically related to the screen’s 3840×2160 resolution.

Using our growing variety of 4K demo sources – we’re up to a whole couple of hours worth now!! – the 84L9363DB gives a very decent UHD account of itself indeed. For starters we’re reminded right away that 84 inches is a brilliantly large venue for bathing in 4K’s glories, providing a fantastically obvious way for you to see the extra resolution, extra colour blend finesse and extra sense of depth that 4K brings to the party.

We’re adamant that you can appreciate 4K’s benefits even on a 55-inch screen. But it’s also true that the advantages are clearly more in your face at 84 inches.

The 84L9363DB isn’t quite as blisteringly crisp with native 4K content as some of its rivals in its ‘normal’ sharpness state, but calling in the ResolutionPlus feature injects a noticeable extra level of detail into very dense image elements like grass, beaches, trees, brickwork and so on. And ResolutionPlus does this without, crucially, making the image look noisy or processed for the majority of the time.

The only exception to this is if the native 4K source contains a lot of grain; then ResolutionPlus can cause things to start too gritty for comfort. While it’s best used on an ad hoc basis rather than constantly, though, we surprised ourselves by finding we’d rather use it than not for most of the time.

We were pleased to see, too, that the intense clarity of native 4K sources doesn’t take too much of a dive when there’s a lot of motion in the frame. In other words, the native response time of the 84-inch panel seems pretty speedy, so that LCD’s general problems with resolution loss over moving objects are quite well contained.

There is, though, some judder in the 84L9363DB’s native images, and there’s a sense of detail being lost in that judder. You can tackle this almost completely if you use the TV’s ClearScan processing on its mid or High setting, but unfortunately this isn’t a solution we’d really recommend, as it causes some distracting processing side effects like smearing around moving objects and a rather video-like feel to Blu-ray movies.

Plus, bizarrely, the ClearScan system seems to cause a dislocation between the video and audio tracks with some sources, leading to some fairly distracting lip-synch errors.

Getting back to the good stuff, the Toshiba 84L9363DB’s colour handling with native 4K sources looks excellent, as impressively rich saturations join forces with good blend subtlety and an effective and natural tonal balance.

Upscaling – which is of course still critical on a 4K TV given the lack of native 4K sources right now – is reasonably effective on the 84L9363DB. The most striking strength of the CEVO 4K Engine’s approach is the way it can recognise and then very effectively remove source noise during the upscaling process, rather than just sharpening everything ‘unintelligently’ and thus exaggerating such source artefacts as grain, mosquito noise and MPEG compression artefacts.

This impressive talent with noise suppression means that even pretty grubby Freeview standard definition broadcasts are tolerable rather than being offensive to your eyeballs, while HD sources tend to look clean and polished. However, while the 84L9363DB does a great job at suppressing noise, it’s not quite as astute as some rivals at adding an extra 4K-like sense of sharpness to HD sources. Upscaled images look slightly softer and less refined when it comes to subtle colour blends than the upscaled images of Sony’s X9005A and Samsung’s F9000 models.

Still, when you take into account how many pixels of extra image data the TV is having to work with in the 4K upscaling process — and the unforgiving size of the screen — there’s no doubt that 84L9363DB’s CEVO 4K Engine really does do a very good job with the non-native 4K sources that will make up pretty much all of your viewing sources for the next few months, at least. 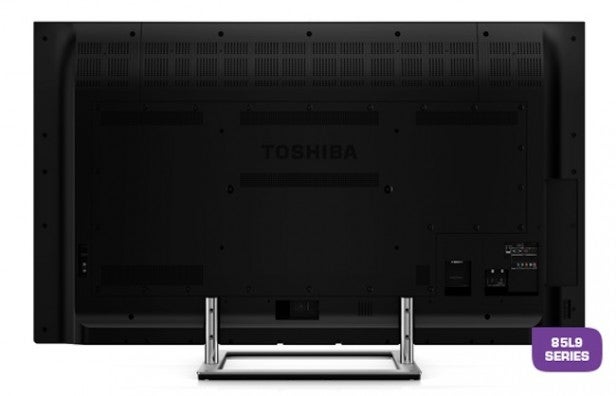 You can probably tell from what we’ve said so far that the 84L9363DB
gives a very positive account of itself for much of the time. Especially
considering its incredibly low (by above 80 inch 4K TV standards)
price. You can probably also guess from the mark at the top of this
review, though, that there’s an almighty ‘but’ in the offing…

This comes to light when you’re watching dark scenes. Sadly the Toshiba 84L9363DB really struggles to deliver these convincingly due to a fairly severe lack of native contrast.

Toshiba’s own specifications for the set only talk of a native contrast figure of 1600:1, and this relatively low number (some of Toshiba’s own normal HD LED sets quote figures as high as 4000:1) manifests itself all too readily on the screen.

With the set’s Adaptive Backlight Control feature deactivated, dark scenes all appear through a seriously distracting amount of grey mist – the classic indicator of a low-contrast panel. As well as making black colours look unconvincing, this greyness can hide subtle shadow details in dark areas – the last thing you want on a 4K TV, of course, given that these TVs are all about the detail.

The set’s problems achieving a convincing black level without the Adaptive Backlight in play also means that some colour tones struggle to look credible and rich during dark scenes, thanks to the infusion of ‘accidental’ grey.

Happily, engaging the Adaptive Backlight Control on its highest power setting almost completely solves some of the contrast issues. Blacks suddenly look pretty close to black, colours in dark scenes burst into life, and while shadow detail still gets a little crushed out, there’s at least a bit more depth to dark scenes than there was before. However…

The Adaptive Backlight Control brings its own significant problems. For even though the 84L9363DB does not, apparently, use a local dimming system in its edge LED array, there’s clear evidence of light ‘blocking’ and light columns around bright objects during predominantly dark scenes.

This artefact of the edge LED’s inability to keep its lighting local enough can be seriously distracting at times, especially if you’re watching a 2.35/2.4:1-ratio film with black bars above and below the picture.

It’s also particularly problematic if the content of the picture is changing rapidly, as your viewing is beset by continuingly shifting light block artefacts in different parts of the screen.

Needless to say, this is all seriously damaging to your ability to get immersed in what your viewing, and the 84-inch size of the screen merely exaggerates the problems.

It should be stressed that while watching bright content this light blocking problem is more or less indiscernible. And it’s also much less problematic if you’re watching the TV in a fairly bright room than it is if you’ve dimmed the lights for a serious movie session.

When all’s said and done, though, there’s no getting round the fact that the 84L9363DB’s basic contrast performance just isn’t as good as it really needs to be at this level of the market.