If you didn’t think you’d have a prayer of getting a TV bigger than 50in for your one grand budget, Toshiba – who else? – is here to make you think again with its 58-inch 58L7365: A king-sized set which despite its affordability carries 3D playback, Toshiba’s latest Smart TV platform, built-in Wi-Fi and a 200Hz picture engine.

While lifting the Toshiba 58L7365DB onto its desktop stand, it creaked. It creaked a lot. This, it’s fair to say, didn’t exactly instil much confidence about the 58L7365’s build quality. In fact, we wouldn’t have been entirely surprised if the set wasn’t still working once our lifting work was done. (Fortunately it was.) 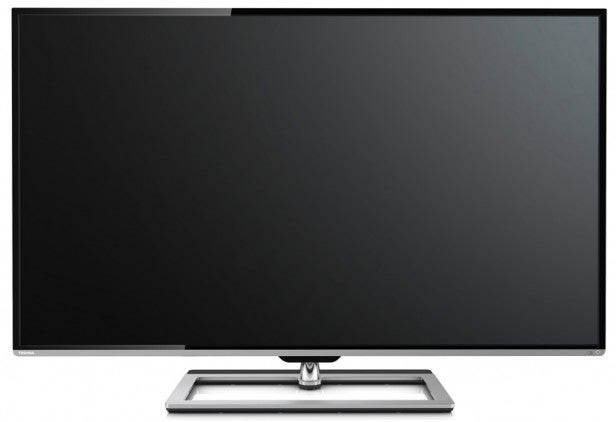 The set’s flimsy feel can be seen too in the rather plasticky finish of the TV’s bezel.

The Toshiba 58L7365DB is not a complete style wasteland, though. Its bezel is reasonably trim considering what a huge screen it’s wrapped around, and the sliver of silver along the bottom edge together with the bold open-framed rectangular table-mount stand both give it some kerb appeal.

Connections on the Toshiba 58L7365DB’s rear are impressive for its money. Standing out are four HDMIs, two USBs, MHL phone linkage and a LAN port – though if you don’t want to hardwire the set to your home network, the TV also carries built-in Wi-Fi. Or WiDi if you have a PC capable of using Intel’s wireless PC connection system.

If you’re thinking of wall-mounting the Toshiba 58L7365DB, though, you should note that some of the connections – most notably the LAN and one of the HDMIs – face straight out, potentially making it harder to get the set resting flat to the wall.

Despite its sub-£1000 price, the 58L7365DB actually sits towards the top of the Toshiba’s 2013 TV range. Until the brand’s 4K/UHD models turn up, at any rate, which means it comes packing some surprising feature heat.

Looking at its core panel technology for starters, it delivers 200Hz motion processing courtesy of a 100Hz core panel together with a blinking backlight. It also has a dynamic contrast system driving its edge LED lighting, though there’s no local dimming technology to boost contrast. Samsung in particular, though, has proved with its F7000 and F8000 series that it is still possible to deliver a very strong contrast performance without local dimming.

The two pairs of glasses included in the TV’s packaging remind us that the 58L7365 is a 3D TV. And surprisingly, perhaps, this 3D is of the active variety, delivering a full HD 3D experience via active shutter glasses.

While there are issues with active 3D playback – especially flickering in bright rooms and the relative expense of active 3D glasses – it remains the AV enthusiast’s 3D format of choice on account of its higher resolution. So long, of course, as it’s done well. For another issue with active 3D is that it’s rather easy to mess it up, especially at the relatively affordable end of the market. We’ll cover 3D performance later.

The Toshiba 58L7365DB is capable of playing a solid selection of video, photo and music multimedia file formats from USB stick or networked DLNA-capable PCs. The set’s network options also provide a route to Toshiba’s latest Cloud TV service: a new ring-fenced online platform complete with a redesigned, multi-hub interface that if nothing else shows Toshiba is willing to think out of the box a bit in its bid to offer something different to its rivals.

As noted in our in-depth assessment of the Toshiba ‘Cloud TV’ platform, not all of Toshiba’s ideas stick. For instance, sticking a big Twitter feed line showing hashtag threads associated with the top three trending TV shows wasn’t the smartest move given most Twitter uses fondness for grim language. The presentation is a bit rough and ready too, the TV’s operating system runs painfully slowly, and  worst of all there aren’t as many video streaming services on offer as you get with many rival online platforms.

There are good points too, though. Such as the extent of the search engine, the use of a series of avatars to recommend different content from the upcoming TV listings, the provision of an iOS/Android MediaGuide app for off-TV programme listing surfing, and even the facility to establish a shared calendar between your TV and smart devices (though this only works with iOS at the time of writing).

When you first turn on the Toshiba 58L7365DB, you’re guided through the key elements of initial set up by a pleasingly presented and fairly fulsome series of onscreen menus. 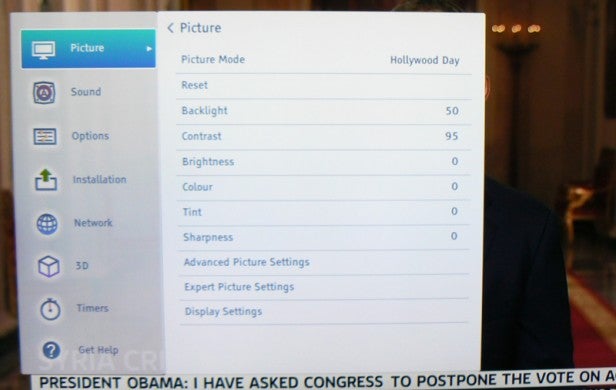 Once this initial set up is done, you soon discover that for such an affordable big-screen TV the 58L7365DB is also remarkably well stocked with picture set up tools. There are full colour management and white balance adjustments for die-hard cinephiles to sink their teeth into, as well as gamma controls to optimise the image for different content types.

With the help of these heavy duty fine tuners it is possible to get pictures set up so they measure reasonably accurately against the key video playback standards. Most more ‘casual’ users, though, won’t want to venture into such deep calibration waters. So it’s good to see Toshiba providing a long list of picture presets, including three ‘Hollywood’ options supposedly pre-calibrated to deliver enthusiast-type pictures in different room conditions.

The odd thing is, though, that none of these presets, not even the Hollywood ones, produced colours that looked especially authentic. They all seemed a bit oversaturated while skin tones looked either a bit over-pink or yellow around the gills. So at the very least we’d recommend that you tone down the TV’s colour saturation setting and adjust the red and yellow balances.

Other settings we recommend are: leaving off the Auto Brightness Sensor (which can adjust pictures in response to the amount of light in your room); setting the Active Backlight Control off (to avoid the picture’s light levels becoming unstable and distracting); turning off the set’s twin noise reduction circuits for HD viewing; reducing the backlight level to around its 42 level for dark-room movie viewing; and using the ClearScan motion processing circuitry on its lowest level but no higher. In fact, you may prefer to leave the feature off entirely for Blu-ray viewing, depending on your tastes.