Samsung might have been pipped to the post by Panasonic this year in the annual race to be the first big brand to launch its new TV range into the UK, but we – and, we suspect, the world at large – are still pretty psyched to have the first 2013-range Samsung TV, the F8000 range, now sat on our test bench.

Especially as this new model, the Samsung UE55F8000, comes from the very top of Samsung’s new F8000 range, meaning it should show us Samsung flexing absolutely all of its latest TV muscles. Which sounds much more disturbing than we meant it to…

No sooner have you lifted the Samsung UE55F8000 out of its box than it starts to impress. For even by Samsung’s traditionally trend-setting design standards the UE55F8000 is one heck of a looker, chiefly because there’s so little of it.

We’re accustomed now to finding high-end TVs sporting crazily slim bezels, but the UE55F8000 takes this to a new extreme by surrounding its 55-inch screen with under half a centimetre of beautifully finished black frame, trimmed by a mere sliver of metallic silver. 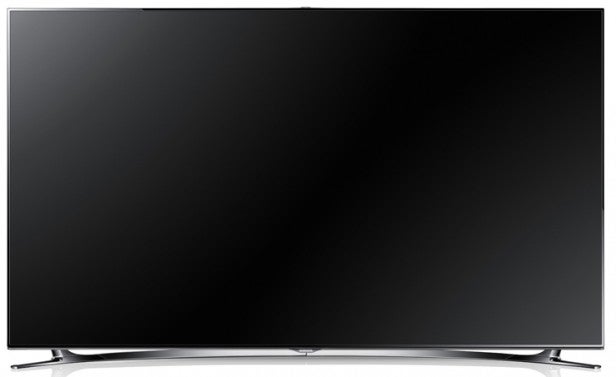 The simple notion that such a puny bezel on an edge LED TV can still deliver 55in of bright pictures seems to defy the laws of physics, while the visual impact of having so little bezel is underlined by the fact that even the bottom edge of the TV – the edge where most manufacturers allow themselves a little more bezel depth – is just as thin as the other three sides, except for a little section in the centre holding a tiny illuminated Samsung logo. Well, you didn’t expect Samsung to go to so much trouble with the TV’s design without making sure they got the credit for it, did you?!

Even the Samsung UE55F8000’s stand is a work of art, using a remarkably narrow curved bar that runs behind the TV, so that aside from a couple of small silver protrusions at each of the bottom corners the TV looks like it’s just floating in space.

The only thing slight issue with this stand is that it needs to stand on a surface as wide as the TV; anything less and the small front support sections of the curved stand won’t rest on anything and the TV will simply topple forward. Ouch.

With so little bezel to support the screen, it’s pleasing to find Samsung making the Samsung UE55F8000’s rear far more rigid and robust than the ones on last year’s equivalent ES8000 models. In fact, the polished metallic look to this rear is almost as pretty in its own way as the TV’s ultra-minimalist front.

All the connections on the rear are positioned for side access, making the UE55F8000 easy to hang on the wall if that suits your room set up. The connections are predictably prodigious too – especially now Samsung has sensibly gone back to providing four HDMIs after curiously flirting with just three on last year’s models. There are both RF and satellite tuner feeds too, as the UE55F8000 sports both Freeview and Freesat HD tuners. 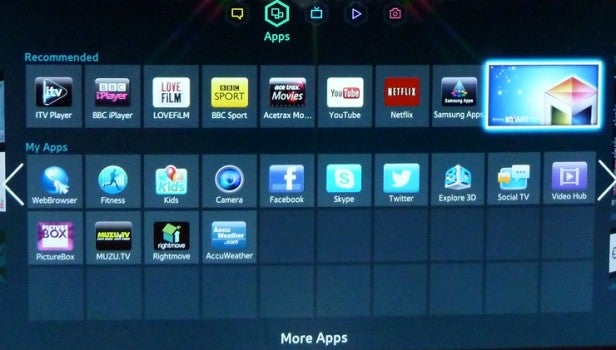 Plus, of course, there are multimedia options aplenty, thanks to three USBs, a LAN port, and built-in Wi-Fi. The USBs can play back a large array of video, photo and music file formats, as well as allowing you to connect USB HDDs for timeshifting from the digital tuners.

The Samsung UE55F8000’s LAN/Wi-Fi options, though, are where things really get interesting. For as well as enabling you to stream files from DLNA-capable computers with the aid of Samsung’s AllShare software, they also permit you to go online with the latest incarnation of Samsung’s online Smart TV service.

There’s far too much to talk about regarding Samsung’s Smart TV platform to do it justice in this review. So look out for an in-depth analysis of it in the next few days.

In the meantime, though, we should cover at least the basics here, kicking off with the fact that Samsung has adopted a similar strategy to Panasonic by providing you with five different themed ‘home screens’. The default starting screen is ‘On TV’ which plays a reduced version of the current broadcast programme while also showing other recommended broadcasts and shows coming up on preferred channels in the coming hour or so.

The most important word in the previous paragraph is ‘recommended’.  For in a really significant move, Samsung’s Smart platform can now track your viewing habits and, TiVo-style, use the programme information supplied by broadcasters to identify other TV shows you might be interested in. Nifty. 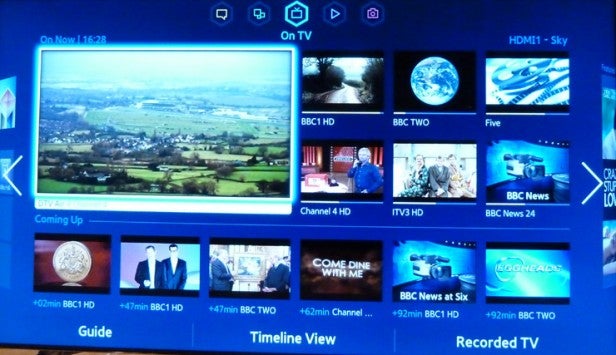 The other home screens on offer cover: movies and TV show searches (again with a recommendation system) over any platform available, be it broadcast or online; a portal to your photos, videos and music files; a social page for YouTube Skype, Twitter and Facebook activity; and an Apps page for managing and accessing the apps already on your TV and those available for download from Samsung’s servers.

The presentation values throughout are extremely high, though a bit more on-screen information might have been appreciated in places. As would the option to develop a truly personalised home screen like you can with Panasonic’s new system. But as we say, we’ll get into this in more detail in a separate feature.

Used as the main TV for the review period
Tested for more than a week
Tested using industry calibrated tools, discs and with real world use
Tested with broadcast content (HD/SD), video streams and demo discs
Next
Features and 2D Picture Quality Review