After its squeaky build quality and our recent rather unhappy experience with the 58L7365’s sibling, the 50-inch Toshiba 50L7355, we weren’t honestly expecting great things from the 58L7365’s pictures. But it actually turns out to be a pleasant surprise.

The key to this surprise – so long as you’ve followed the basic set up steps outlined earlier – is that the bigger model’s black level response is comfortably superior to that of its smaller sibling. Watching a selection of our favourite dark movie scenes, the 58L7365 clearly suffers far less with the grey feeling over dark scenes witnessed on the 50L7355.

Even better, it also suffers much less with the black crushing effect of the smaller model, meaning that dark scenes retain far more shadow detail. This is crucial, since you no longer find yourself straining your eyes for detail that’s been crushed out of the image. 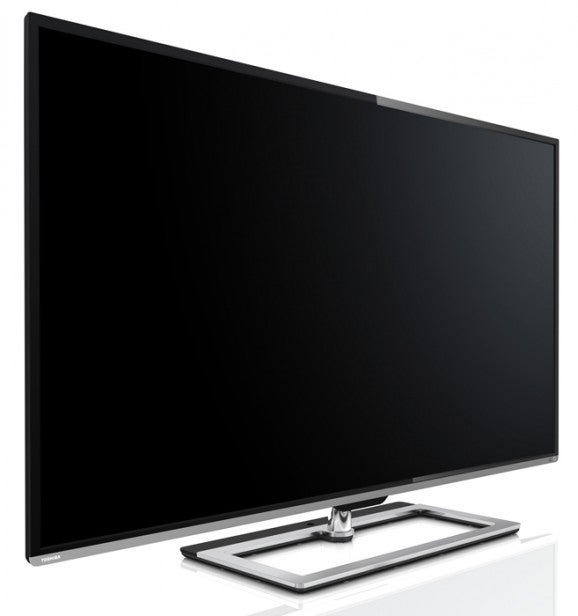 It also helps dark scenes achieve a sense of depth that feels much more in keeping with that on show during bright scenes, making the viewing experience more consistent, and allowing dark colours to enjoy more credible and subtle tones.

To be fair we’re not talking about world-beating black levels – our positivity comes from a comparison with the underwhelming 50L7355. Compared with some of this year’s numerous (but more expensive) black level LCD stars it certainly exhibits more greyness over dark scenes.

Also, more troublingly, we could clearly see areas of backlight inconsistency, where some patches – especially in the upper corners  – of dark scenes looked a little cloudy thanks to the edge-mounted lighting not being distributed perfectly evenly across the screen.
You can, though, subdue this problem’s impact quite handily by keeping the backlight setting sensibly low.

In an ideal world we’d have liked to give dark scenes a little more dynamism by being able to leave the adaptive backlight feature on. But unfortunately this is so over-aggressive with its machinations that it proves too distracting to be practical.

As noted in passing earlier, the Toshiba 58L7365DB’s improved black level response helps it produce more natural colours during dark scenes. But it seemed to us that Toshiba’s big boy produced more credible colours during bright scenes too, at least again after taking the precautions outlined in the setup section. 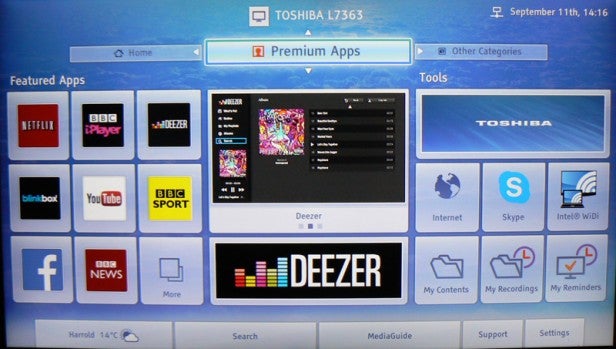 There’s still a lack of subtlety in the rendering of fine colour blends versus higher-end TVs, leaving some expanses of colour and skin tones looking slightly plasticky. But this is a small point and certainly no deal breaker for the 58L7365’s money.

The Toshiba 58L7365DB’s HD pictures also look sharper and more detailed than those of its 50-inch sibling. Some of this sharpness slips away when there’s a lot of motion in the frame, even with the motion processing in play (on its lowest level at most, though, remember). But overall sharpness levels remain strong enough to deliver HD’s benefits more than adequately at this level of the market.

The weakest point of the Toshiba 58L7365DB’s 2D performance is standard definition. Digital broadcasts tend to look either too noisy and ‘forced’, or too soft and blocky, depending on whether you have Toshiba’s Resolution processing engaged or not. But then with a Freeview HD tuner built into the TV and external HD sources 10-a-penny these days, it’s not that hard to avoid standard def almost completely. Even the Watch channel is now available in HD.

Used as the main TV for the review period
Tested for more than a week
Tested using industry calibrated tools, discs and with real world use
Tested with broadcast content (HD/SD), video streams and demo discs
Previous
Toshiba 58L7365DB Review Next
3D, Audio and Conclusions Review