What is the Toshiba Cloud TV system?

Toshiba has a history of forging its own, distinctive Smart TV path, and in the process it has hit upon a few neat ideas later ‘borrowed’ by other TV brands. We’re genuinely intrigued to find out where this spirit of innovation might has led Toshiba in the development of the new Cloud TV smart system built into the brand’s new TVs.

The differences ushered in by the arrival of Toshiba Cloud TV start to hit you as soon as you first switch the TV on. You get a much more helpful and detailed set of installation menus than Toshiba has shown before, featuring a handy progress ‘flow-chart’ down the left side of the screen and a separate activity window to the right containing impressively fulsome explanations – with diagrams – of what the current installation step you’re on is all about.

The set automatically checks your network status during this installation and looks for any potential firmware upgrades that may be ready to download.  This is much better than expecting you to look for updates yourself manually after the initial installation, as some systems do.

You are also given during installation the option of enabling or disabling ‘power on control’, which slightly increases power consumption but means you can view the net and menus more quickly. We’d suggest that you leave this system enabled. 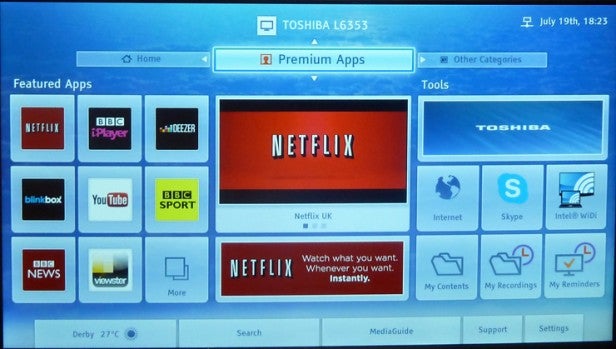 It’s good, too, to find Toshiba’s installation menus introducing you to the brand’s new duo of smart device apps for enhanced connectivity with your new TV. The set doesn’t actually go so far as to tell you the names of these apps, but a quick diversion to the printed Cloud TV guide reveals that the names you want to be looking for in the Apple and Google Play stores are Toshiba Cloud TV and Toshiba Mediaguide. More on these later.

The only disappointing thing about the installation menus on the 40-inch 40L6353 set we were using while putting the Cloud TV system through its paces is that their text looks slightly out of focus.

Once installation is complete, hitting the Home button on Toshiba’s new remote control presents you with an interface that couldn’t look more different to the black background, large text and bold, primary colours of Toshiba’s previous ‘Places’ smart TV system.

Instead you get a pale blue backdrop predominantly populated by boxes of varying shades of cyan and lighter blue, populated by small but legible text. It’s a much less strident approach than that used with Toshiba’s old smart TV system, but also one that makes it much easier for your senses to cope with the increased amount of information being presented on screen.

In terms of its organisation, the new Cloud TV interface goes for the multiple hub approach also witnessed this year on Panasonic and Samsung Smart TVs, allowing you to scroll between the opening Home hub screen, a Premium Apps screen, a TV & Video screen and an Other Categories screen.

Starting with the Home screen, a busy but uncluttered layout kicks off at the top with a user ID icon. This will just give the name of the TV if no particular user has been logged in, but can also show the profile name of any of a limitless number of different registered users in your house.

Setting up these user profiles is strikingly easy compared with the faff of, say, Samsung’s latest Smart TV interface, and switching between different users is no more difficult than selecting the icon at the top of the page and picking the profile you want. 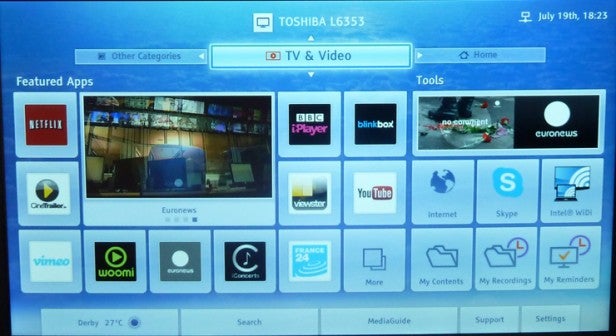 Why bother with different profiles? Two main reasons. First and most immediately, selecting your profile enables the TV to sync up with your own personalised Cloud data stream, where you can have store a schedule of upcoming events input either through the TV or on the Cloud TV app on your iPad. Much more impressively, though, the personal profile system will apparently also enable the TV to track your own viewing habits and make viewing recommendations accordingly – once this service goes live.

Toshiba won’t be drawn on exactly when this viewing history feature may launch, only saying that it’s for “later in the year”. But it seems to us that Toshiba’s new interface already looks set with its infrastructure and layout to make such a feature work more successfully and straightforwardly than it currently does on either Samsung or LG’s Smart TV systems.

Moving down the screen from the personal ID indicator, you get a box indicating which hub screen you’re currently on, and from where you can simply scroll to the others by pushing left or right on the remote.

The home screen of the Smart interface lets you see the programme you were watching in miniaturised form in the corner of the screen, along with, the channel name and the show’s time slot.

Beneath this information is a recommendations system. This seems a bit weird at first, as an ‘avatar’ suggests something you might want to watch from the upcoming programme listings with initially seemingly little rhyme or reason to these recommendations.

Things start to make some kind of sense, though, when you scan your eye over to the right of the Home Hub screen and clock the roster of four faces there, accompanied by little icons indicating ‘areas of interest’ for these invented digital characters. One avatar is devoted to sport, one is devoted to family material, one is devoted to films, and one to TV shows.

The recommendations come from a ‘Hotlist’ made by Rovi, which provides software for a wide range of set-top boxes.

The recommendations system takes a bit of getting used to – associating different types with avatars is needlessly embellished – but does start to become useful. For even though it doesn’t yet base its picks on your viewing habits, it still occasionally highlights a gem you might well have missed otherwise.

Later in the year, the four current recommendation avatars will be joined by a fifth, which will be responsible for the previously mentioned personalised recommendations based on your own viewing history.

One last comment about these avatars, though, is to question if they’re really necessary. It might have been more straightforward if Toshiba had just presented genre icons rather than weird low-res faces. But then who knows; maybe the four TV-loving characters will end up becoming your best friends.

Used as the main TV for the review period
Tested for more than a week
Tested using industry calibrated tools, discs and with real world use
Tested with broadcast content (HD/SD), video streams and demo discs
Next
Social Media and Search Tools Review