The Toshiba 55U7763DB is the second model we’ve tested from the brand since it was taken over for the UK by Turkish manufacturer Vestel. It steps things up from the rather disappointing Toshiba 49U6763DB by adding a wide-colour-gamut panel.

Despite that, it still doesn’t support HDR. It does boast a native 4K resolution, and its £579 price is tiny for such a large-screen model.

Unfortunately, while the U77 series is better than the U67 series, it still suffers some serious limitations. 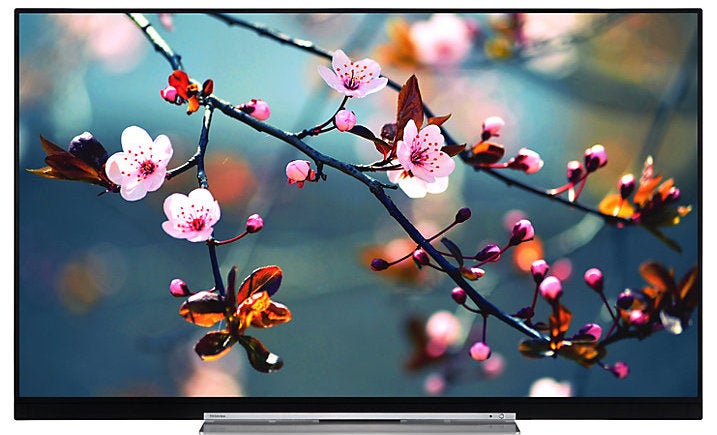 At 21kg, the 55U7763DB is a pretty lightweight bit of kit. Hardly surprising, then, that its bodywork is predominantly made out of uninspiring plastic.

It’s slim enough round the back and trim enough with its border. So it’s not exactly ugly, especially as the metal stand and little silver bar element hanging off the screen’s bottom edge look and feel surprisingly high-rent for a £579 TV.

The remote control you get with the 55U77DB feels so light and flimsy you worry it will float away if you let go of it. Its layout feels crowded and cluttered and its buttons feel unresponsive. It does get brownie points for carrying dedicated Netflix, YouTube and Freeview Play buttons.

The 55U7763DB’s headline grabbing trick is the way it offers a 55-inch, 4K-resolution TV for £579. Also important is its support for a wider colour gamut, given that’s the main thing separating it from Toshiba’s cheaper U67 models.

With this in mind, it’s perhaps a pity that the 55U7763DB joins the U67 models in not supporting high dynamic range (HDR) playback. That said, budget TVs often come a cropper when trying to handle HDR’s considerable picture quality demands, so maybe it’s good the 55U7763DB doesn’t try to shoot for a moon it likely couldn’t have reached. 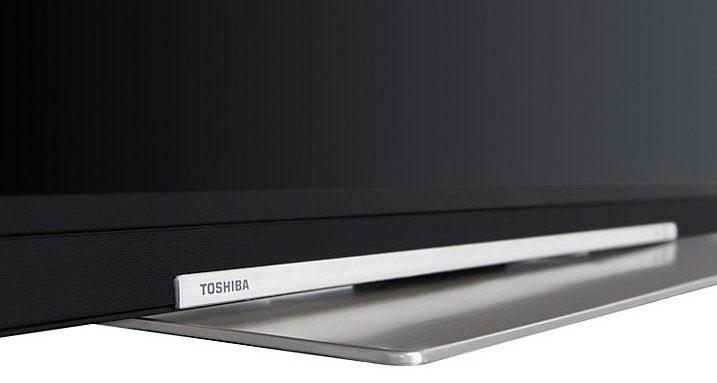 Surprisingly for its money, the 55U7763DB is reasonably rich in smart features. Toshiba’s Smart portal provides access to around 50 apps. These include Facebook, Twitter, Netflix and YouView. At the time of writing, it did not have Amazon Video.

In addition, you helpfully get Freeview Play, providing access to the catch-up services of all of the UK’s main terrestrial broadcasters. You even get a 7-day backward electronic programme guide to help you find shows you may have missed.

A Screen Share system makes it reasonably easy to wirelessly display photos from smartphones and tablets. Plus you can record video from the Freeview HD tuner to USB HDD. Finally, the 55U7763DB goes beyond expectation with its connections. Four HDMIs lead the way, backed up by three USBs and even – get this – a Scart socket. Ask your parents. 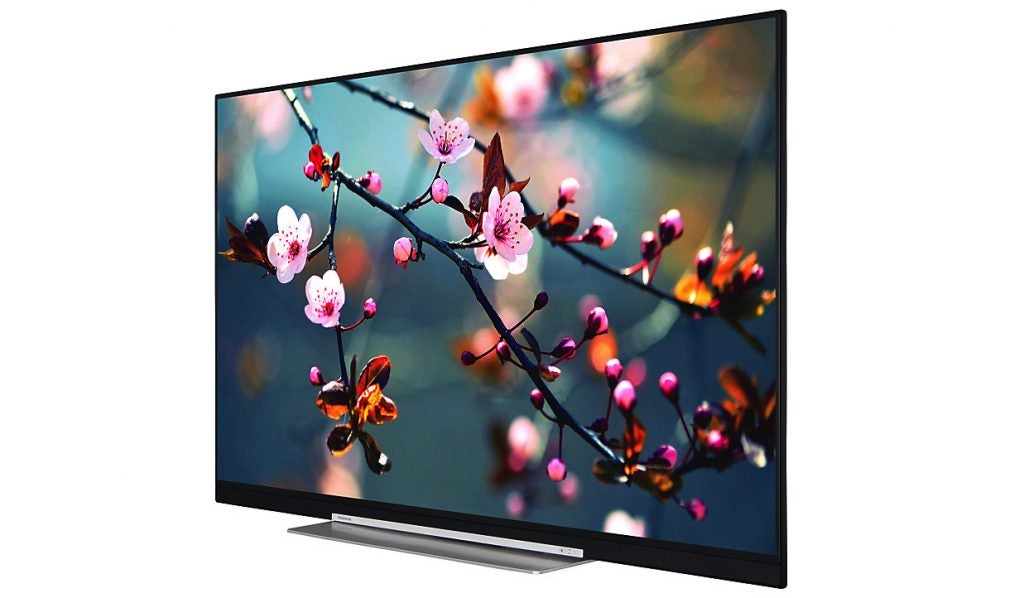 It’s immediately apparent that the 55U7763DB is sufficiently superior to the Toshiba U67 range to justify its extra cost. The extra colour gamut at its disposal instantly makes pictures look more natural and cinematic.

The image also looks a little crisper with native 4K content than its cheaper sibling. Mostly, I suspect, because of its extra colour refinement.

It’s not the brightest TV around, but it at least avoids that drab, muted look associated with some very cheap TVs.

Its sound is better in some ways than that of most budget sets too. Its speakers face forward, giving the sound a pleasingly direct feel. They produce a decently open, rounded tone, and their soundstage spreads well beyond the TV’s edges. A rear-mounted woofer port has a good go at introducing a little bass to proceedings as well.

This gives up the ghost pretty easily, though, when pushed hard by a meaty explosion or thumping score. It doesn’t drop out completely, but it certainly starts to sound thuddy and harsh. Fortunately the clarity from the other speakers holds up rather better when the going gets tough. 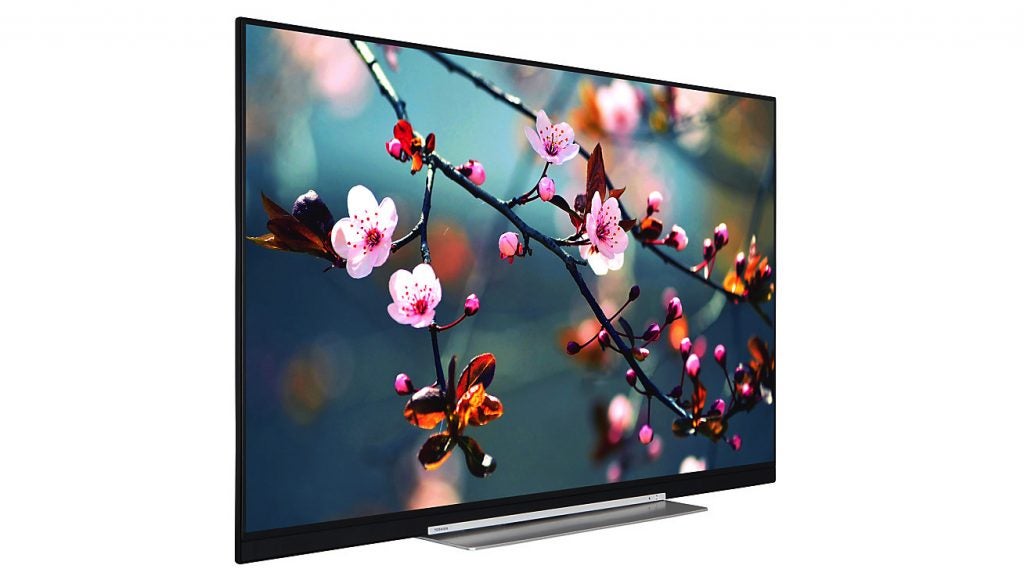 Now for the bad news. As with the U67 series, black levels are poor. The 55U7763DB never produces anything approaching real black, instead succumbing to greyness whenever something is supposed to look dark.

The 55U7763DB’s problems with black even stretch to an unnatural glowing effect over the very darkest picture elements. Also frustrating is the amount of backlight clouding routinely visible during dark scenes. This includes both backlight bleed coming in from the screen’s edges, and areas of black level inconsistency in fairly central image areas.

Overall, I’d say around 60% of the screen suffers with some degree of clouding, and it’s pronounced enough to be visible even over mid-dark shots. You don’t have to be watching something that’s almost fully black to notice it. The various black level shortcomings can cause a pronounced blue tone to infiltrate dark scenes, too. 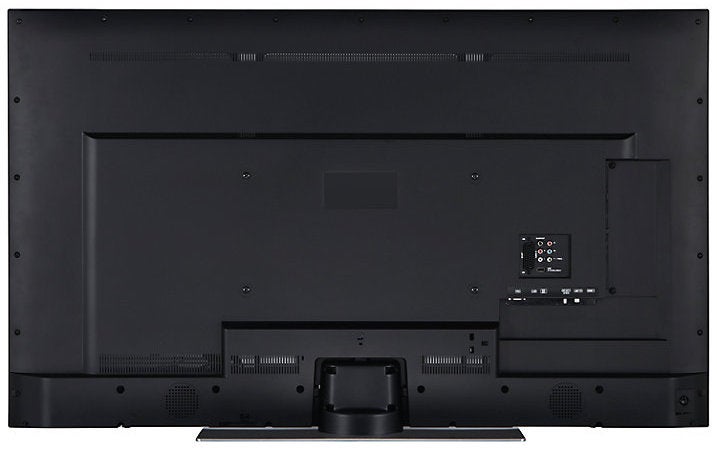 The set proves to be a merely fair to middling upscaler of HD sources. Upscaled images look a touch soft and processed, and the system isn’t particularly smart at discerning source noise from ‘real’ picture information.

While the screen delivers a better sense of its native 4K resolution than the U67 series, it struggles to retain that clarity when there’s motion to deal with. There’s a loss of resolution as objects cross the screen, and sometimes this is accompanied by smearing and lag. Especially when you start using the TV from cold. Strangely the 55U7763DB appeared to perform worse with motion than the U67 model.

Finally, the 55U7763DB is about average for gaming. It turned in an input lag measurement (the time it takes to render its images) when using its Game preset of around 49ms. This is an adequate rather than good figure that could marginally impact fast-reaction gaming. Especially as some of the measurements I took slid beyond 70ms.

There are a few things you can do to improve the image, but they don’t change things massively. First, marry the provided picture ‘modes’ (including Cinema and Sport) to the content you’re watching. Second, turn off all noise reduction, as this heavily softens the picture. Third, keep the contrast below 85 to limit the appearance of noise. Finally, turn off energy saving, and when watching films set Movie Sense to Low and Film Mode to Auto.

You might also want to play around with the Dynamic Contrast setting, but personally I found the default Medium setting the most effective.

The 55U7763DB’s enhanced colour performance does make it a more persuasive budget option than its cheaper U67 sibling. There are at least times where the 55U7763DB’s pictures are actually quite pleasant to watch. It’s also true that there’s precious little 55-inch competition around at the sub-£600 price point.

The 55U7763DB improves in some ways over Toshiba’s latest entry-level 4K range. However, its black level and motion shortcomings still make it tough to recommend, even at £579.