Toshiba is back in the TV game! But there's work to be done...

Although the 49-inch, 4K-resolution 49U6763DB is predominantly Vestel’s work, however, we’re assured that Toshiba engineers have had plenty of oversight on it. Though if that’s true, it seems those engineers have been willing to jettison more picture quality to hit the set’s £499 price than most AV fans will likely feel comfortable with.

From the front, the 49U6763 doesn’t look bad at all. The black screen frame doesn’t seem overtly plasticky, and the strange silver ‘box’ that hangs from the screen’s bottom edge looks quite cool, albeit a little uncomfortably sandwiched between the screen and the surprisingly well-built metal stand. 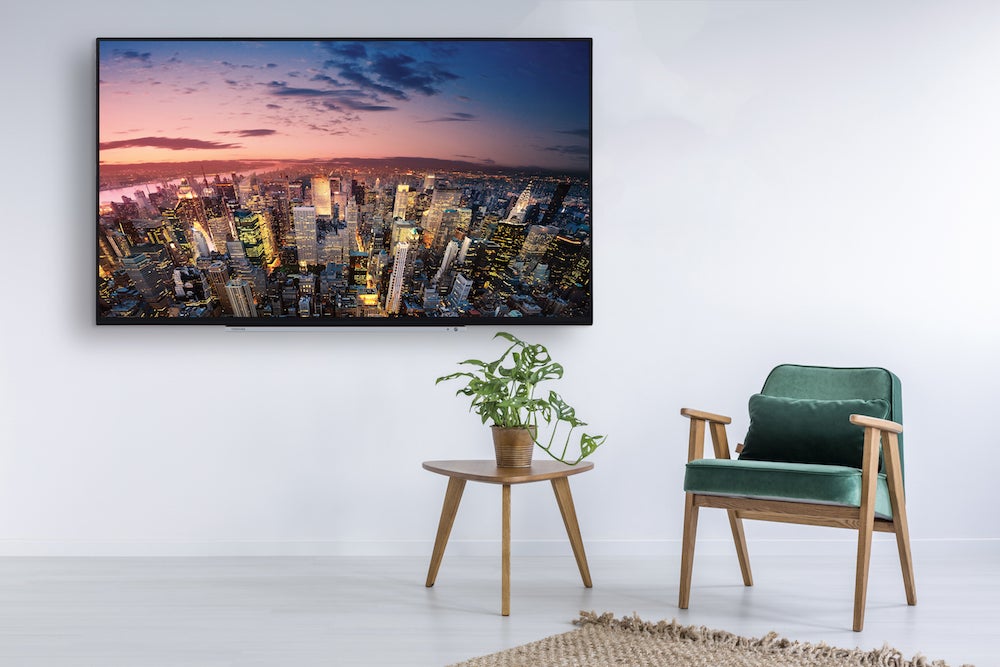 The 49U6763DB doesn’t get one of those ‘360-degree’ designs so popular (largely pointlessly) these days, though. Its rear is a chunky mountain of plastic; essentially the very definition of function over form.

The 49U6763DB’s remote control design is hit and miss. Its build quality is plasticky and lightweight, and it crams too many navigation buttons into too small an area.

On the upside, it has boldly whitened Netflix and information buttons, and its buttons provide comforting, almost ‘clicky’, feedback.

I won’t dwell on this section for long, as basically nothing you can tweak makes much difference!

For what it’s worth, you should turn off noise reduction for native 4K sources, and you should probably use the dynamic contrast feature on medium or low. Make sure you’ve got the aspect ratio set to ‘full’ for widescreen HD and 4K content if you want the cleanest, fullest image. 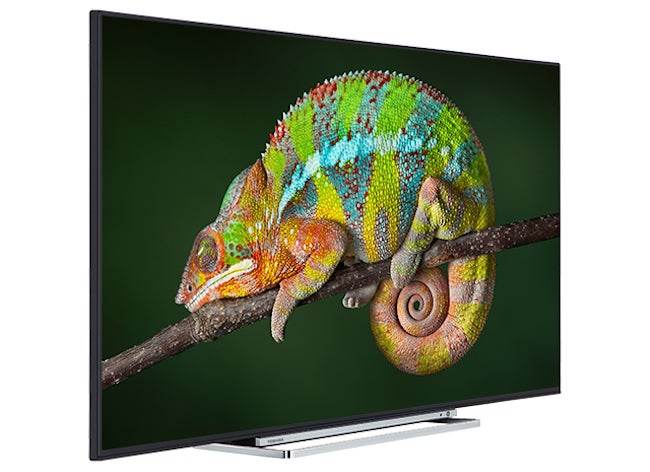 Finally, stick with the ‘Natural’ or ‘Cinema’ presets, unless you’re gaming, in which case you definitely need to switch to the ‘Game’ preset to make the TV more responsive.

The 49U6763DB’s quest for affordability has led it to ditch that other 2017 hot property: high dynamic range. In fact, the 49U6763DB doesn’t even boast any wide colour gamut support. So if you play a 4K Blu-ray into it, you will only get the disc’s 4K resolution. You won’t benefit from its HDR or WCG capabilities.

This could actually be a good thing though. Not because I don’t like HDR; I do. It’s become clear though, that HDR only really works on pretty high-end TVs. On many cheap TVs, it can look a mess, frankly. So I have no complaints with Toshiba/Vestel opting to concentrate on getting 4K SDR right for £499. Or at least I wouldn’t have any complaints if they had actually got 4K SDR right…

The 49U6763DB boasts a passable – for the money – selection of online features. Around 50 apps are available in all, including 4K versions of Netflix and YouTube, plus the catchup apps for the BBC, ITV, Channel 4 and Channel 5. Actually, these catch-up apps are available within a built-in Freeview Play wrapper, complete with seven-day ‘rewind’ electronic programme guide. 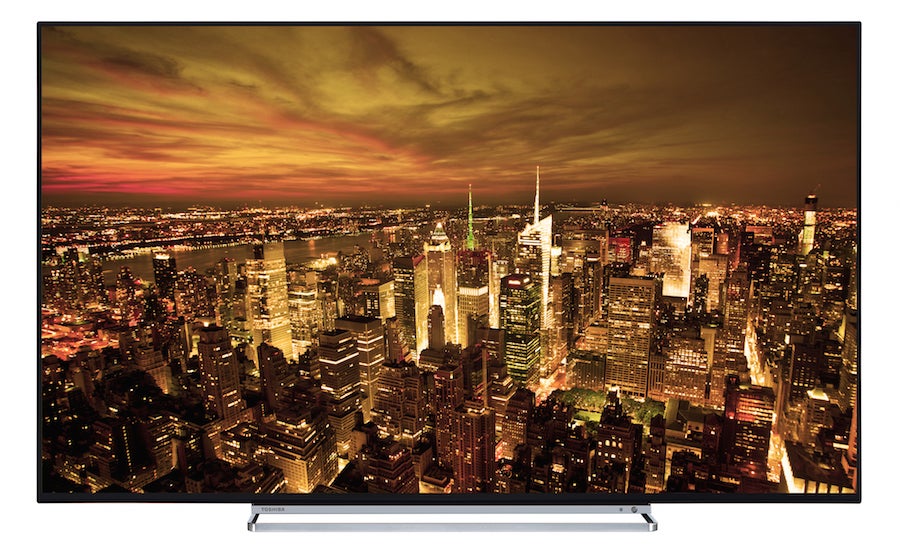 There’s no sign of Amazon Video at the time of writing though, and in truth, most of the apps on offer are of little interest to most people. Also, while it’s functional, the 49U6763DB’s smart interface looks like a throwback to 2008, and runs sluggishly – as do the TV’s main menus.

I can at least finish this section on a high though, thanks to the 49U6763DB’s connections. These include four HDMIs, three USBs, integrated Wi-Fi and even a Scart. Yes, an honest-to-goodness, 21-pin Scart. Those flashbacks to 2008 just get stronger…

Right from the off, sadly, it’s clear we’re not in the presence of picture quality greatness.

First of all, dark pictures look seriously washed out. The set doesn’t even try to deliver anything approaching a proper black colour. Instead a classic low-contrast grey mist over everything makes dark scenes and dark picture areas look consistently unnatural.

The greyness also causes subtle detailing to go AWOL in dark scenes, leaving them looking hollow and one-dimensional. The grey wash and lack of a true black foundation causes many colour tones to look muted and drab too.

As if all this wasn’t already disappointing enough from a TV that apparently uses a direct LED lighting system (where the LEDs sit behind the screen), really dark scenes also reveal distracting backlight clouding/leakage at the screen’s edges.

And there’s more. The lack of contrast also reduces the impact of the 49U6763DB’s 4K resolution, thanks to a lack of the subtle light and colour tone shifts that help delineate 4K detail. I struggled to see much difference in detail and clarity at all between HD and 4K feeds of the same movie. 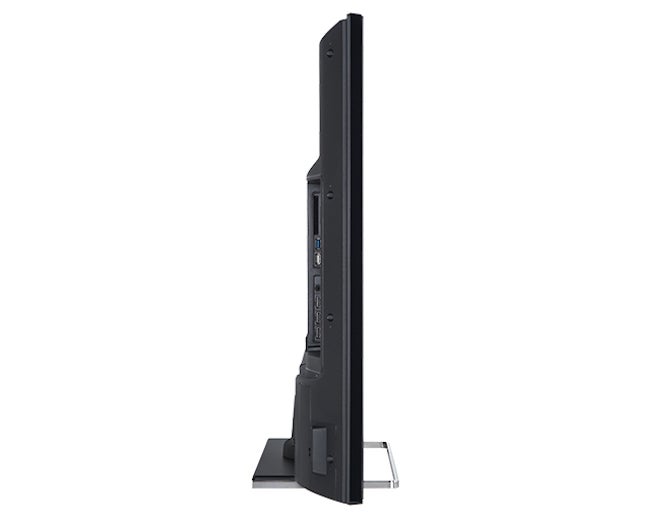 As noted in the setup section, none of the 49U6763DB’s picture adjustments significantly improve the picture’s underlying greyness. Setting the dynamic contrast to medium or high can at least inject more life into bright image elements, slightly distracting you from the poor black levels’ negative impact. But the fundamental greyness remains unchecked.

Another sign that you’re watching a self-consciously budget TV is the way colour blends occasionally break down into quite pronounced striping. For instance, there’s clear banding in the colours of the back of Nebula’s blue head as she argues with Gamora after crashing into a planet in Guardians Of The Galaxy Volume 2’s 4K Blu-ray.

Couple this colour problem with the 49U6763’s fundamental black level failings, and it’s frankly a relief the set didn’t try to take on HDR.

There are a couple of areas where the 49U6763DB actually outperforms its price point. Motion, for instance, looks surprisingly crisp, with precious little judder or blur. This is extremely rare for such an affordable TV. 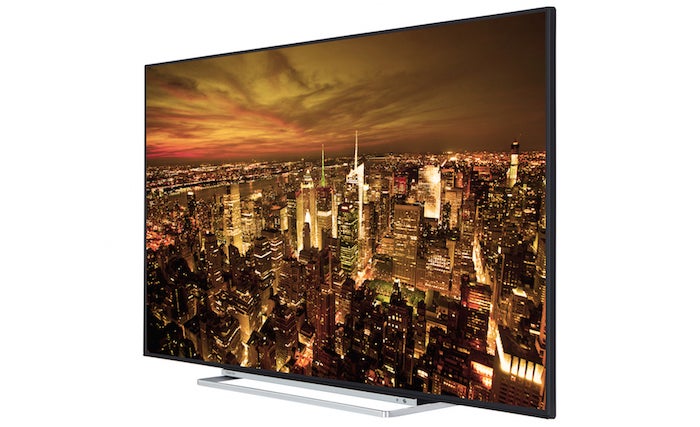 Also, while colours generally feel rather lifeless, the 49U6763DB does handle skin tones bizarrely well, even during fairly low-lit sequences. This makes me think there really is some picture know-how at work here. Which, in turn, raises hopes that Toshiba’s step-up U77 models might turn out much better.

Gamers, meanwhile, should note that the 49U6763DB turns in a passable input lag measurement of 41ms when using its ‘Game’ preset. This falls some way short of the 10-15ms figures delivered by some TVs this year, but it’s still a solid result for a budget TV.

In contrast to the 49U6763DB’s generally underwhelming picture is a genuinely decent audio performance. While its speakers don’t plumb great bass depths or achieve soaring treble highs, they do stay distortion- and harshness-free. There’s just enough scale to the mid-range, too, to stop action scenes sounding ‘squished’ and weedy. And voices generally sound decently well-rounded and clear.

If you absolutely, definitely can’t find more than £500, I guess there’s nothing else we’ve tested that gives you so many 4K screen inches for so little buck. 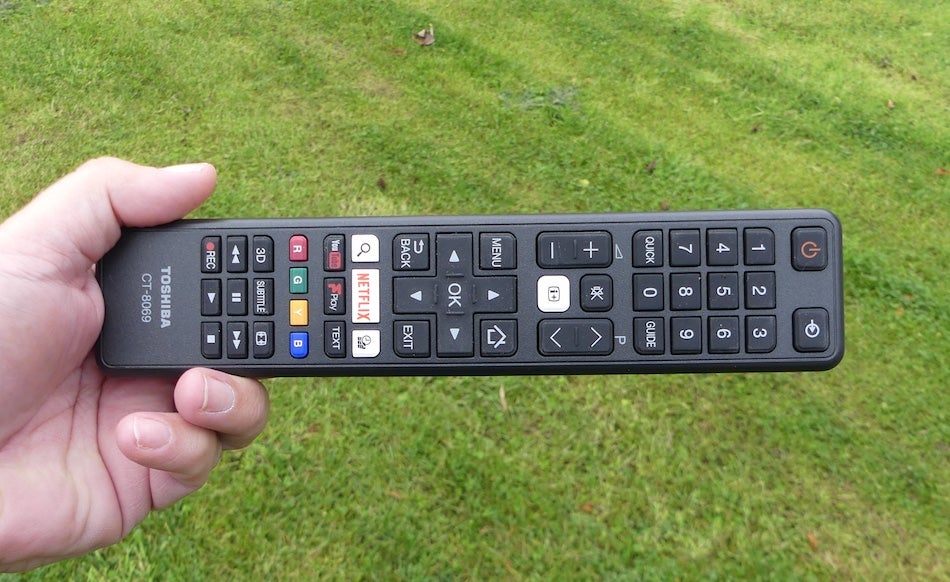 However, the Hisense 50N6800 only costs around £60 more now. And while that set doesn’t deliver on its HDR ambitions, it’s certainly superior to the 49U6763DB with SDR.

In an ideal world, you’d take the (admittedly quite steep) step up to the £849 Samsung UE49MU7000. This rewards your extra cash with not just an excellent SDR performance, but also a surprisingly convincing HDR effort.

On the evidence of the 49U6763DB, the relaunch of the Toshiba brand in the UK isn’t quite the triumphant return we’d hoped for. In truth, the only thing about it that really feels like Toshiba is the logo. Here’s hoping that the (re)brand’s step-up LCD and OLED models prove more persuasive.