As yet unknown. We’ll let you know as soon as we know.

This E3 all the attention has been on the big boys’ toys, with the magpie hordes rushing to check out Microsoft’s super-powered Xbox One X and established titles, such as Assassin’s Creed Origins and Forza Motorsport 7.

While I understand the appeal – after all, these titles are all big names for a reason – having had a sit down with all of them, none have left me feeling the same raw joy and excited I felt playing indy title The Artful Escape of Francis Vendetti. This is currently the game of E3 2017 in my mind.

This may seem a bold statement for a game that looks like any other side-scrolling platformer. The difference is that, as opposed to the suffocating darkness and isolation of Little Nightmares or kid friendly, prozac-driven happiness of Super Lucky’s Tale and 1930’s animation weirdness of Cuphead, Vendetti has a more psychedelic tone.

But that description doesn’t do it justice, and during the meagre 20 minutes of play time I got, I’d already managed to play through pretty much every dream sequence I had as a wee lad watching Heavy Metal and Bill and Ted.

The story is currently a mystery, as the hands-on dropped me plonk in the centre of a multicoloured forest that looked like it was straight out off a Rush album cover, with zero explanation. From there I enjoyed some pretty par-for-the-course 2D platforming, prancing through the colourful landscape, double-jumping my way from ledge to ledge.

Even doing this was a blast, as the setting has been painstakingly crafted to mirror the animations and prog experiences of old. As I leaped onto a giant mushroom, the game erupted with an alien musical note similar to something you’d hear in Close Encounters of the Third Kind or the intro to a Pink Floyd song, alongside a fireworks-like light show.

Within minutes things got even crazier when the game suddenly instructed me to pull out my light guitar at a seemingly impassible ledge and “shred my way through the sky”. Hammering the A button to rock my way through a beam of light, creating licks that would make Steve Vai turn pale, I eventually landed in a Still Crazy grotto, filled with Strange Fruit – and not the Bill Nighy variety – and was confronted with a giant spider. 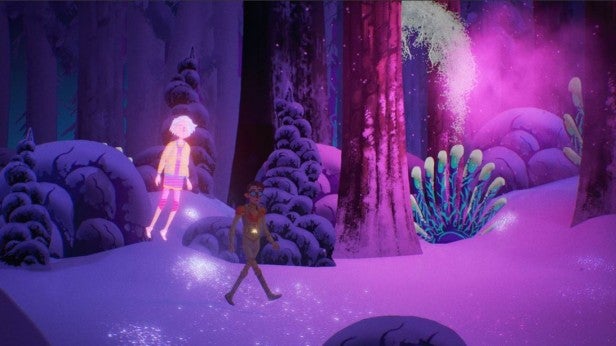 Jumping into the game’s conversation system, which lets you pick one of various responses to the multitude of in-game characters, I found myself in a guitar dual with the eight-legged beast – don’t ask exactly how, as it’d take too long to explain.

In our epic duel I had to replicate sounds and colours coming from the spider’s eyes on my light guitar using the Xbox One controller’s buttons (which in guitar mode are assigned to various notes). It was a battle of memory and finger dexterity similar to that needed for the popular 1970s Simon toy.

Once again the game’s tone was completely spot-on and the resulting sounds were everything I dreamed of, with each press leading to a beautiful high-sustain guitar tone worthy of the Wild Stallions.

After placating the spider with my godly axe, I moved on and jumped onto a laser snowboard descending down a mountain, jumping crevices as I went, before ending my demo in the presence of what I can only describe as a benevolent space jellyfish. Yeah.

Though its gameplay may not sound groundbreaking, The Artful Escape of Francis Vendetti has completely won me over.

The faithful nod to classic ’70s and ’80s prog rock and power metal, coupled with completely immersive psychedelic visuals, made it one of the most enjoyable demos I’ve had at E3 2017.

If the game can maintain this level of variety and joyful fun through Vendetti’s adventure, it could be one of the best indie titles to arrive this year.

My only regret is that I didn’t get to see the game in its full HDR glory, as the monitors on the demo didn’t support high dynamic range, despite me testing it on the Xbox One X.