Considering the Xbox One X as the most powerful console ever, and the place to be to see the most beautiful games, it’s surprising that we’re getting Forza Motorsport 7 a month before the hardware launches. Forza has always been a showcase game for Xbox, with every new piece of hardware using one of its titles to show off exactly what the hardware can do. While we may not have the X, this is still the most stunning racing title ever seen on a console, and it’s only going to get prettier in November.

It’s hard to overstate just how gorgeous Forza Motorsport 7 is. From the moment you jump into your first race, you’ll be in awe of the sheer beauty of everything the game does. Wet tracks glisten as the sun kisses the tarmac, rain lashes against the windscreen, changing its trajectory depending on your speed and if your car is turning. Even your opponents’ Drivatar names reflect on your car’s bonnet. The level of detail across every track and car is staggering. The new dynamic weather effects take things to a whole new level, too. The Forza series has sorely lacked proper weather effects on the current generation of Xbox consoles, but Turn 10 has made up for lost time. The track transition from glorious sunshine to torrential rain is a thing of beauty, even if it does make your drive a bit trickier.

While we may not have the 100 GB worth of 4K textures for Forza 7, the Xbox One S allows for High Dynamic Range (HDR), and it makes a huge difference to the visuals. Colours pop out so much more on a HDR-capable TV, and it’s clearly games like this that will make you that much more tempted to invest in the latest telly tech. It just gives everything that little extra shine or depth to darker shades. Driving through a tunnel on a track in daylight is jaw-dropping on the first run.

As rain gathers on the track, puddles will form off the racing line, and driving across one really does affect the handling. Whichever car you’re in will suddenly feel like it’s skating, with grip only returning to you once you get off the puddle, which could be far too late entering a corner. Thankfully, Forza’s trusty rewind button is always on-hand to save the day, as are its myriad assists to cater the experience to suit your driving expertise and style. 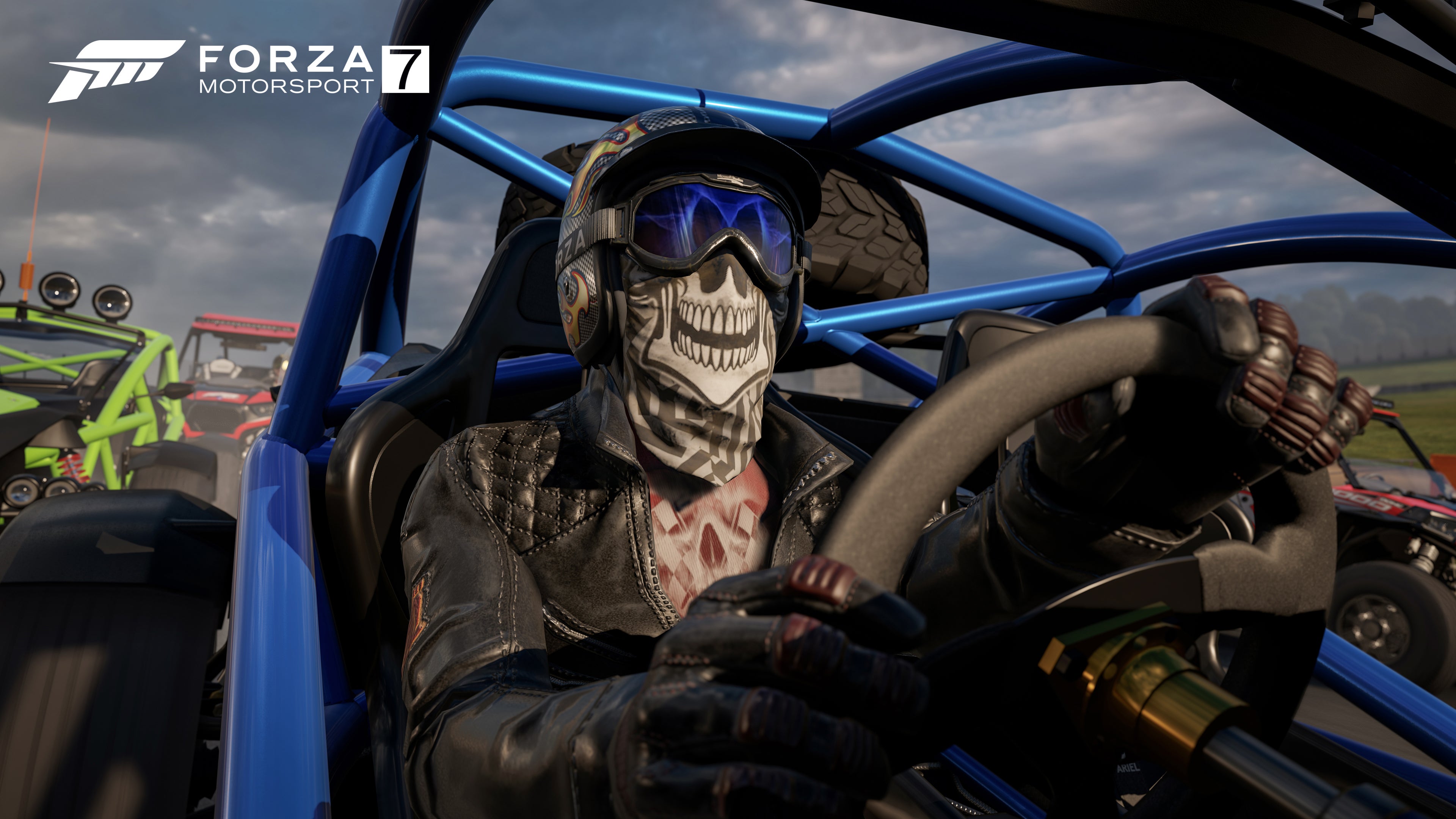 This is where Forza distances itself from the ultra-sims of this world like Project Cars 2. Rather than obsessing over perfectionism, Forza does a much better job of bringing the high-end racing experience to all players, and offering steps for them to improve. Assists can now be turned on and off mid-race, which is great for those who want to test the waters with tougher race settings, especially as you get your mitts on faster cars. Mods also make a return this year, and some encourage you to drive with a certain assist on or off, offering bonus credits or XP in each race. It really is an experience that feels built for every player.

As well as mods, Turn 10 has adopted the loot crate system that other Xbox-exclusive titles like Gears of War 4 use, which can contain cars, mods and driver items of different rarities. They can only be bought with in-game currency at the time of review, with no microtransactions able to unlock additional crates. But it’s a nice system for those who enjoy the random reward element of crates.

But this is one small part of a much revamped presentation, as well as a way more interesting single player campaign. Previous Forza games quickly fell into a grind of moving from isolated race to isolated quest to unlock new cars and become eligible for new events. Forza 7 changes the script by creating a series of “championships”, six in total, each with several race series and one-off special events within. 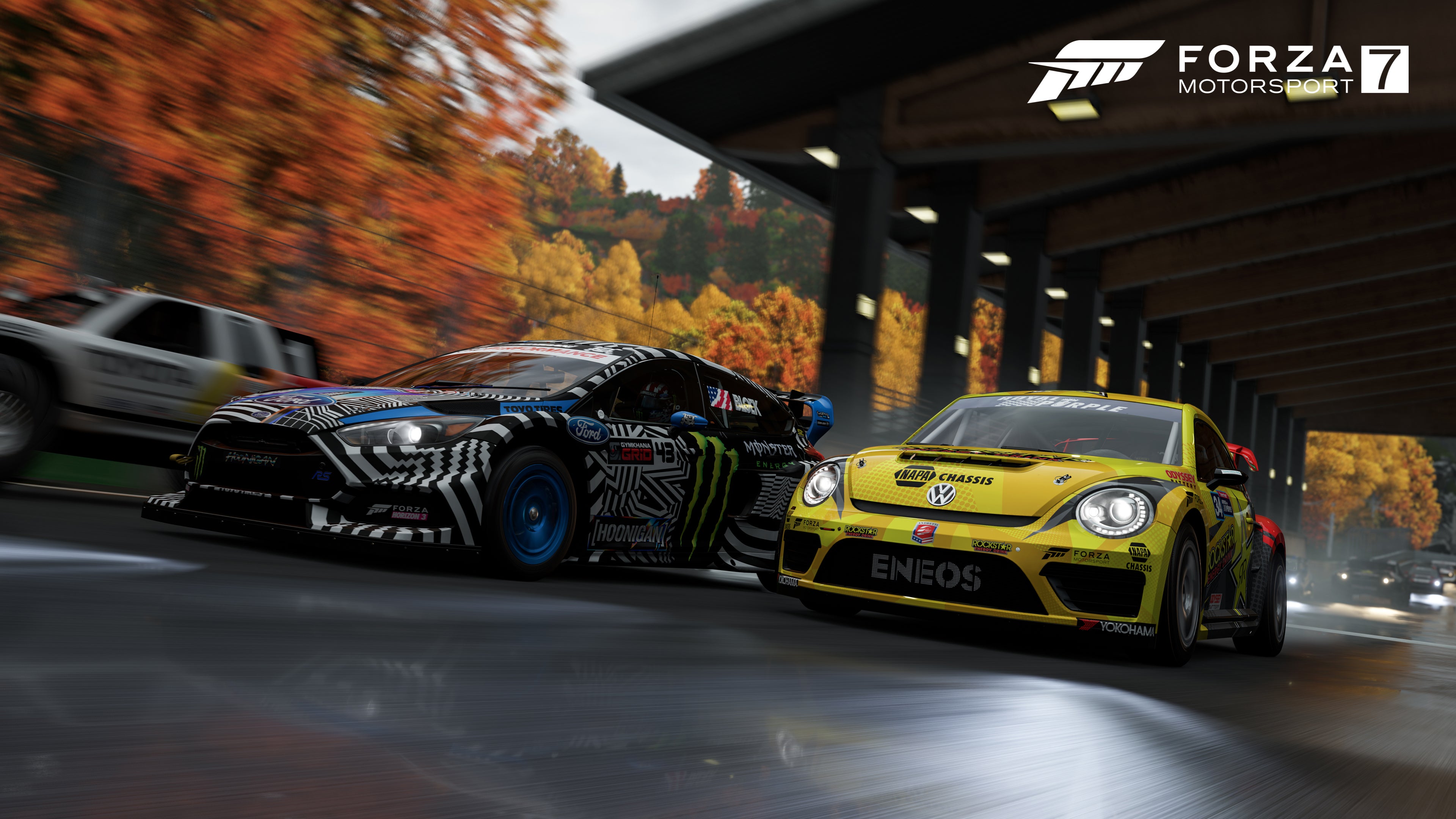 The best part about this is how Turn 10 has revamped the progression from one championship to the next. In Forza 5, players were awarded a medal depending on where they finished, but it wasn’t dependent on finishing first, second or third. Coming in the top three rewarded gold, third to eighth silver and below that, bronze. It was a great system that allowed players to keep driving and improving no matter where they placed on the grid. Then Forza 6 took the backwards step by reverting to top-three finishes as a requirement for progression. Turn 10 has innovated again and created the best setup yet in this latest entry.

Within each championship there are multiple mini-series, each consisting of several races. Much like a Formula One championship, points are earned over the course of each race with a winner decided at the series’ close. This ‘SP’ earned adds towards your overall championship points. Collect enough of them and you earn the trophy, as well as the ability to move on to the next championship.

This sense of progression also translates to the cars, which are divided into tiers. Buying or unlocking cars within each tier also earns points, collecting enough cars within each division will unlock the next one, which houses better cars. It means that everything you do is building towards something, be it a shiny new car, a new championship or just new free stuff to earn, which is rewarded each time you accrue enough XP to level up. Gone is the monotony of moving from race to race. Now I’m chasing the next unlock, and it’s a much better system.

There are a couple of minor issues which can hamper the experience, but not massively. Loading times ahead of each race can feel overly long, especially as your driver avatar does weird dance moves and animations which just look weird while you wait for the next track to load. Also using the rewind function – while often a saving grace from a horrific crash – can cause AI drivers to behave erratically when re-instigating a race, particularly in congested parts of the track. Cars which in the first instance were driving ahead of you will aggressively try to snap across to the racing line, often at the expense of another car, or indeed your own. Hopefully this is something that can be amended in an early patch.

Online experiences can fluctuate, too. I’ve never been a fan of playing racing games online, mainly because the first corner involves people at the back using cars at the front as their brakes. In terms of server stability, on the most part the game is rock solid. You’ll get moments where cars ahead will zip around the track, as if teleporting from one point to the other, but this never happens so close to your car that it forces you to veer off the track.

Turn 10 once again sets the bar for visual performance on the Xbox platform. Forza Motorsport 7 is a drop-dead-gorgeous game that brings sim racing to players of all skill levels. It may lack the absurd depth of the likes of Project Cars 2, but it makes up for it with accessibility and a beautiful presentation across the board.

For those of you picking up an Xbox One X, there’s no doubt this will be one of the must-buy games to show off your new ultra-powerful hardware.

We’ll be returning to this review and re-appraising the game once we’ve tested it on the One X, so be sure to stay tuned for even more Forza Motorsport 7 coverage from Trusted!