Just before Christmas I reviewed the Jessops 10.4-inch LCD Picture Frame, and found it to be a well-made and easy to use, with some nice features including backing music for slide shows and the ability to play movie clips. However at nearly £90 it was quite an expensive gadget, so today I’m taking a look at a slightly cheaper alternative, the Texet DPF-807 8-inch Digital Photo Frame, which is available exclusively from Jessops, priced at a more reasonable £58.71. 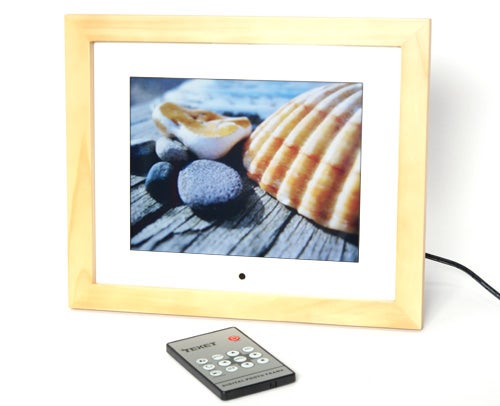 LCD photo frames are becoming more popular as a handy way to display digital photos, but many of them are rather clinical looking devices with austere plastic facias that resemble small computer monitors rather than traditional picture frames. However the Texet DPF-807 bucks this trend. It has an attractive real wood frame, made of what appear to my non-expert eye to be Pine or light Ash. It is constructed like a traditional frame, with mitred joints held together with metal pins at the back. The design is pleasantly proportioned, the wood is finished in a pleasant semi-matt varnish, and looks great sitting on a desk or shelf. 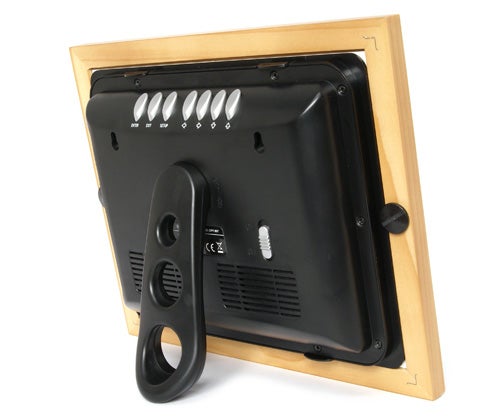 Also like a traditional picture frame it has a white matte card surrounding the screen which appears to be actual cardstock, cut with a bevelled edge, and judging by the slightly ragged edge it may actually be hand-cut rather than stamped out with a dye. There is a small hole cut in the lower part of the matte, behind which is the receiver for the supplied infrared remote control.


On the back of the device ia a row of buttons to control its operation, and on the side are card slots for SD/SDHC and CompactFlash, as well as USB and USB-mini connectors.

The cheaper price of the Texet frame is reflected in a much shorter list of features. While the Jessops own-brand frame can play JPEG, AVI, Motion JPEG and MP3 audio files, the DPF-807 is limited to just JPEG image files. Despite what appear to be speaker grilles built into the back of the case, the DPF-807 has no speakers and thus lacks the option of background music to accompany your slideshows.

The upside of the reduced feature set is that the Texet DPF-807 is extremely easy to use. It has no built-in memory, so it can only display pictures from a memory card or USB flash drive. As soon as a card or drive is inserted, the frame automatically starts to display the pictures it finds on it as a slide show, using the default settings. 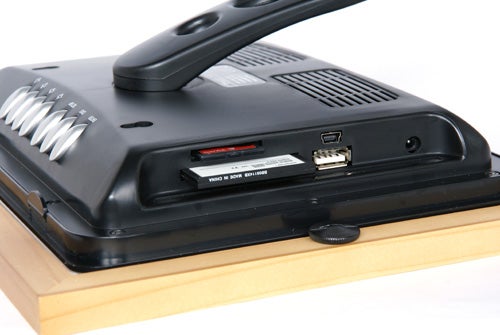 Pressing the Setup button on the remote control or on the back of the frame brings up a small menu, but the list of options is very limited. The only settings are a choice of menu language, the option to display images in colour, monochrome or sepia, a choice of full-frame, stretch or pan-and-scan display and a range of slideshow intervals ranging from five seconds to one hour. There is no option to change the style of the transition between images either, so you’re stuck with the default random selection of wipes and fades, which includes a couple of pretty unpleasant ones.

The overall build quality is good, but I have some reservations about the durability of the removable prop stand that clips onto the back of the device. It is attached via a sort of bayonet fitting, and can be positioned in either portrait or landscape format, but the fitting does feel rather cheap and flimsy, and would need to be treated with care to avoid breakage. Also on the back of the unit are two screw holes so that it can be attached to the wall, but it can only be hung in landscape format. 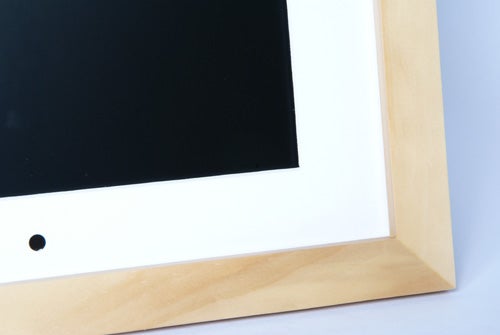 The infrared remote control is a useful extra. It needs to be positioned within about thirty degrees of directly in front of the unit, but it does have quite a good range and will operate the frame from across a large living room. The menu is a bit slow and clunky, but you’re not going to be using that often anyway.


My only other real criticism is the length of the cable on the mains power supply. It is only 1.5m long. So you’ll have to place the frame near a mains outlet, or buy an extension lead. 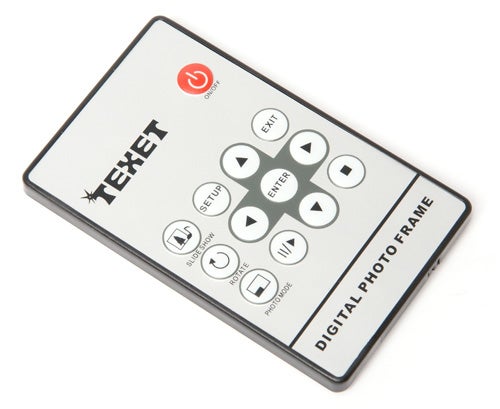 The 800 x 600 pixel LCD monitor is nice and sharp, with good colour reproduction and brightness, but it doesn’t seem to be quite as high contrast as the Jessops own-brand frame. Nonetheless it does a good job of displaying simple JPEG snapshots, copes well with large file sizes, and re-sizes smaller pictures very well, so it can display older VGA cameraphone pictures too.

The Texet DPF-807 Digital Photo Frame is an attractively designed and generally well made device that looks a lot more homely than most other LCD frames. The screen is sharp and bright, and it is extremely easy to use. It lacks many of the features of more expensive models, but makes up for it with simplicity and aesthetic appeal.