The Sony XE70 series is the company’s most affordable range of 4K and HDR TVs in 2017. It’s an excellent option if you want an upgraded TV experience without breaking the bank.

It’s still early days for the new generation of TVs, and there is a limit to how low prices can go before you hit too many technical compromises. So buying a budget 4K TV can be a gamble, but the Sony XE70 is on the right side of cheap. 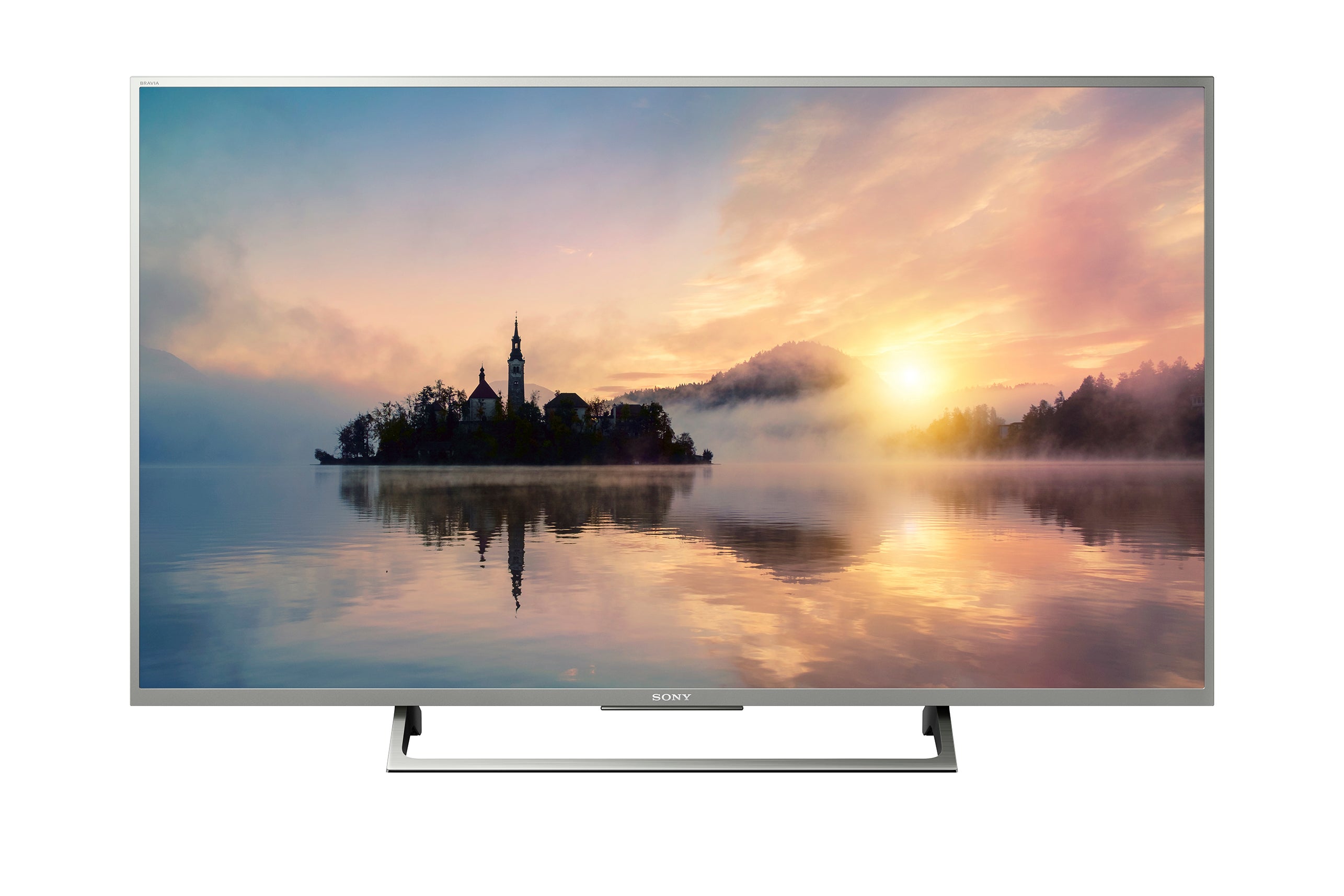 The Sony XE70 looks the part. On an aesthetic level, there is nothing to suggest this is a lesser TV.

It has a slim profile, so it won’t stick out too much if you want to mount it on your wall. It has a fine aluminium frame and narrow bezel, which looks smart and doesn’t distract during viewing.

The central pedestal stand is made of plastic, but it’s sturdy in situ and there is a convincing attempt to make it look metallic. Sony really hates cables, and the stand cleverly channels cables out of the way and makes sure they’re not visible from the sofa.

The XE70 comes with a single traditional remote. I’m fine with that, because I never got on with the awkward, swipe-centric second remote that accompanies more expensive Sony TVs. 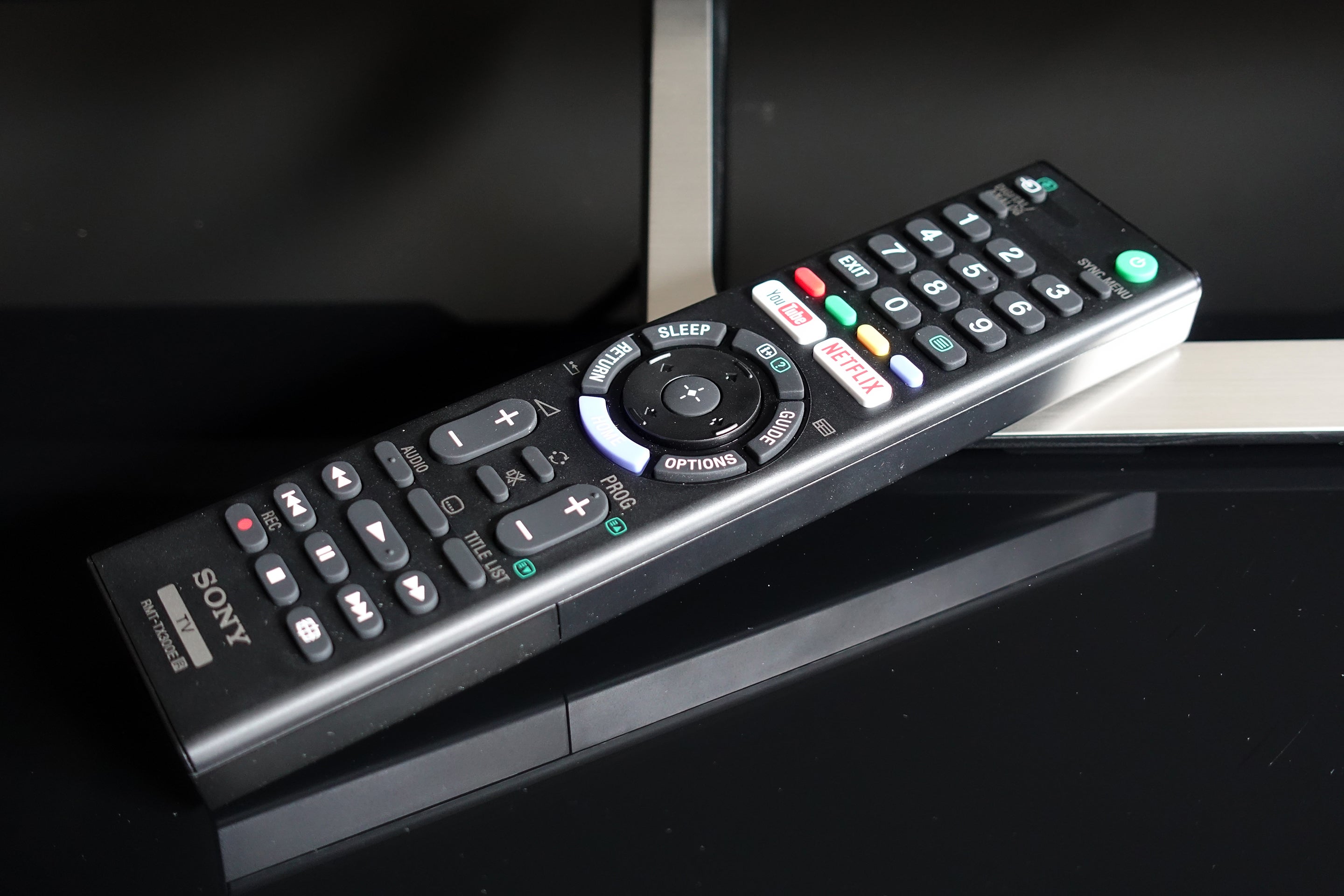 The only thing noticeably non-premium about the Sony XE70 is the inclusion of composite inputs, a staple of older and more basic TVs. So you can upgrade to the latest TV tech but still keep your Nintendo Wii in action.

Other connections include three HDMI inputs (all HDCP 2.2, two HDR-friendly), three USB ports and a digital optical output. There is Wi-Fi on board, but you also get an ethernet socket if you want a more stable connection.

On the inside? The Sony XE70 uses an LCD panel with edge LED lighting. It supports 4K Ultra HD resolution (3840×2160) at 60p, and 10-bit colour. Sony doesn’t like discussing peak brightness, but my own measurements showed a peak luminance of about 370 nits. That’s quite far from the 1000 nits needed for a UHD Premium sticker, but the XE70 is also quite quite far from UHD Premium prices. 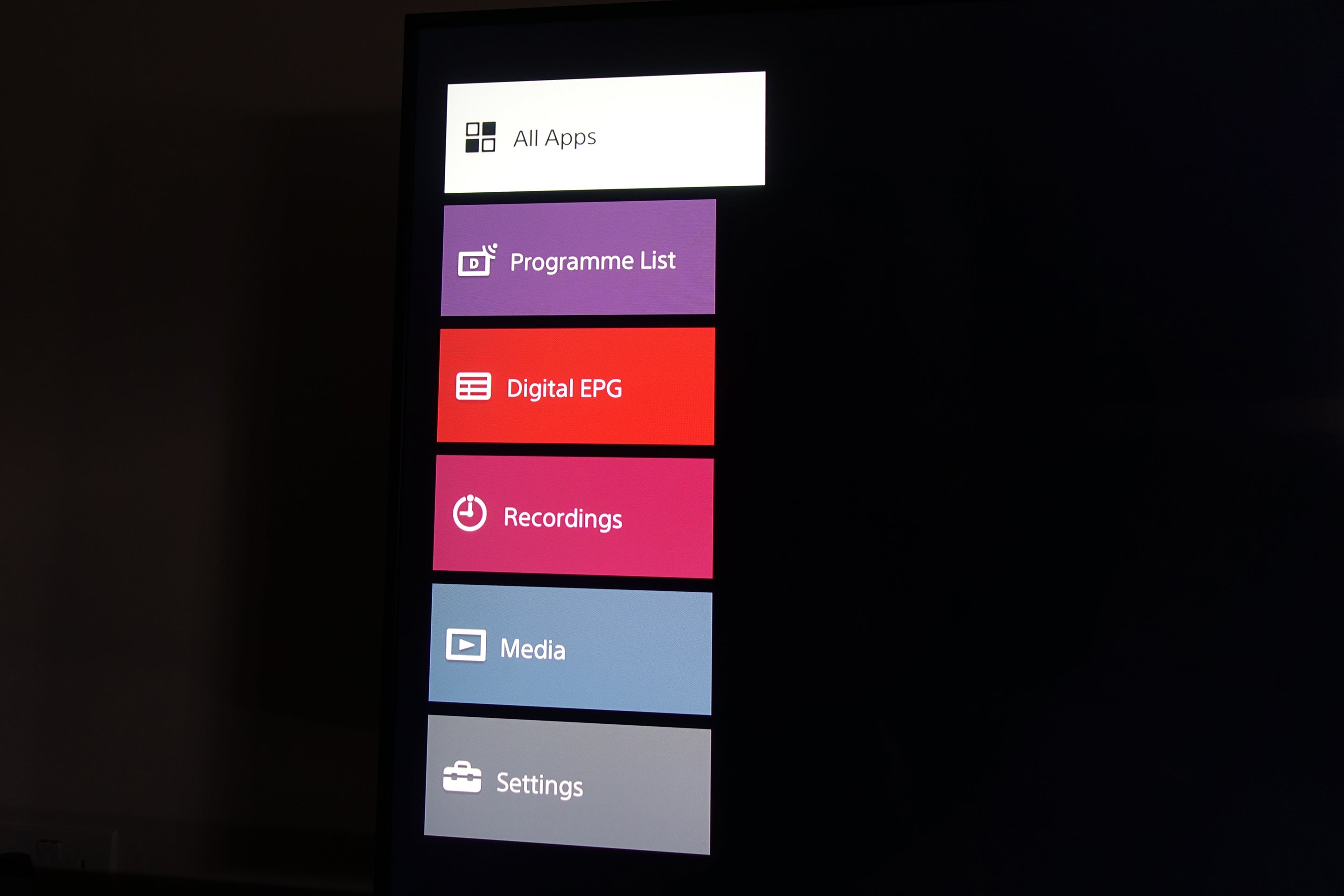 The Sony XE70 supports HDR (High Dynamic Range) at its most basic. That is, it is compatible with the common HDR10 but not the broadcast-friendly HLG (Hybrid Log-Gamma) or the metadata-toting Dolby Vision. Nothing wrong with ‘vanilla’ HDR10, though – that’s what you get from 4K Blu-rays, as well as Netflix and Amazon Video.

Speaking of which, the app offering is decent. Besides Netflix and Amazon, you also get YouTube, BBC iPlayer and Demand 5. At the time of writing, there was no sign of All 4 or ITV Hub. Unlike the Sony TVs further up the range, the XE70 doesn’t use the Android TV smart operating system. That’s not a bad thing, as I’ve always found Android TV a little clunky anyway. I’m glad to see a simple Linux-based interface, which is intuitive and responsive. 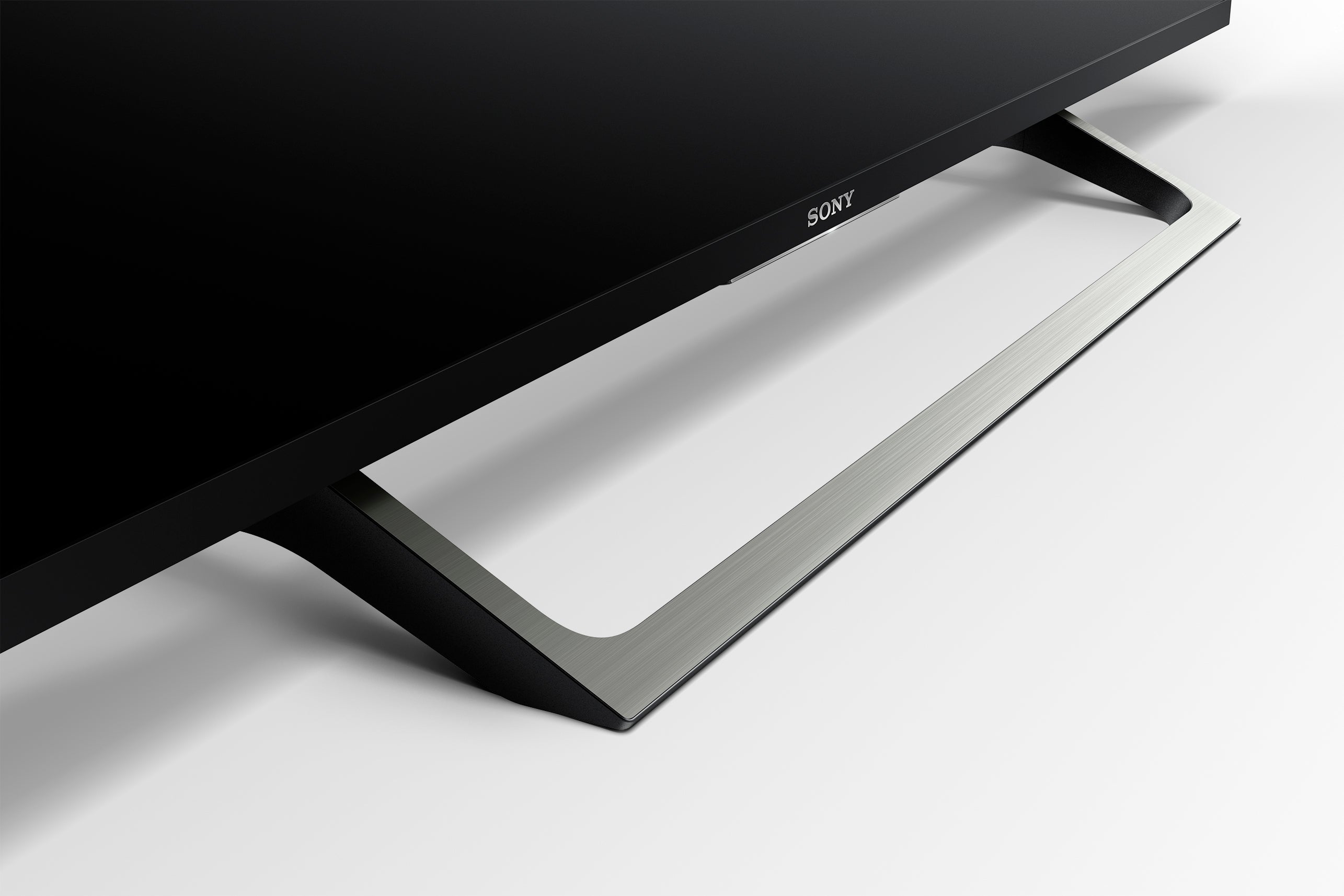 Is it any good? The short answer is yes. For the asking price, the Sony 55XE70 is an excellent choice. Just temper your expectations, because this is an entry-level TV and there are some inevitable compromises. As long as you’re comfortable with a few flaws, there is plenty to like about the XE70.

For starters, it has a remarkably composed picture. Sony hasn’t pushed the 55XE70 too hard or overestimated its abilities, which is something that often happens when you go for more affordable TVs. The Hisense NU6800  is an example of this, with exaggerated colours and too much sharpening. The Sony has none of that.

The clarity of the picture is very impressive. The picture is sharp and generally free of noise when upscaling 1080p sources. Step up to Ultra HD and you benefit from the extra fine detail and texture without the overly processed look that troubled the Hisense N6800. It’s a very clean performance. 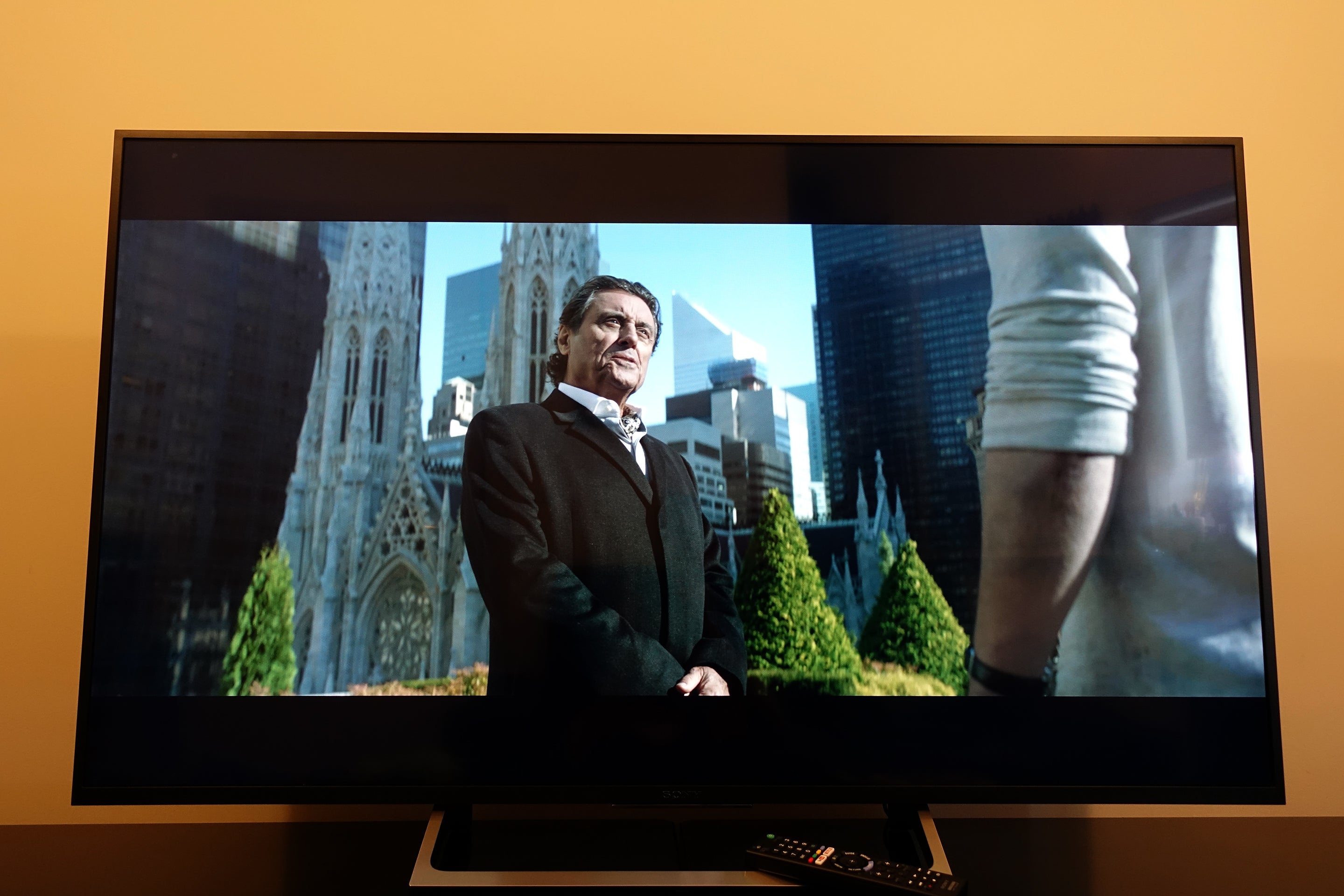 The XE70 is great at colours, too. This has traditionally been one of Sony’s strengths, and what you get is vibrant yet subdued enough to look convincing, rather than psychedelic. It’s a difficult balance but the XE70 manages to get it right, and there’s a level of nuance to the colours I’d expect from TVs more expensive.

That’s especially the case when the XE70 is fed the 10-bit colour of 4K Blu-rays. The New York taxis in John Wick 2 are a great example of skillful shading – the paintwork offers subtle gradations, showing off contours where so often they can appear as flat yellow cut-outs. Best of all, there is no sign of the colour striping that some more expensive TVs suffer from. 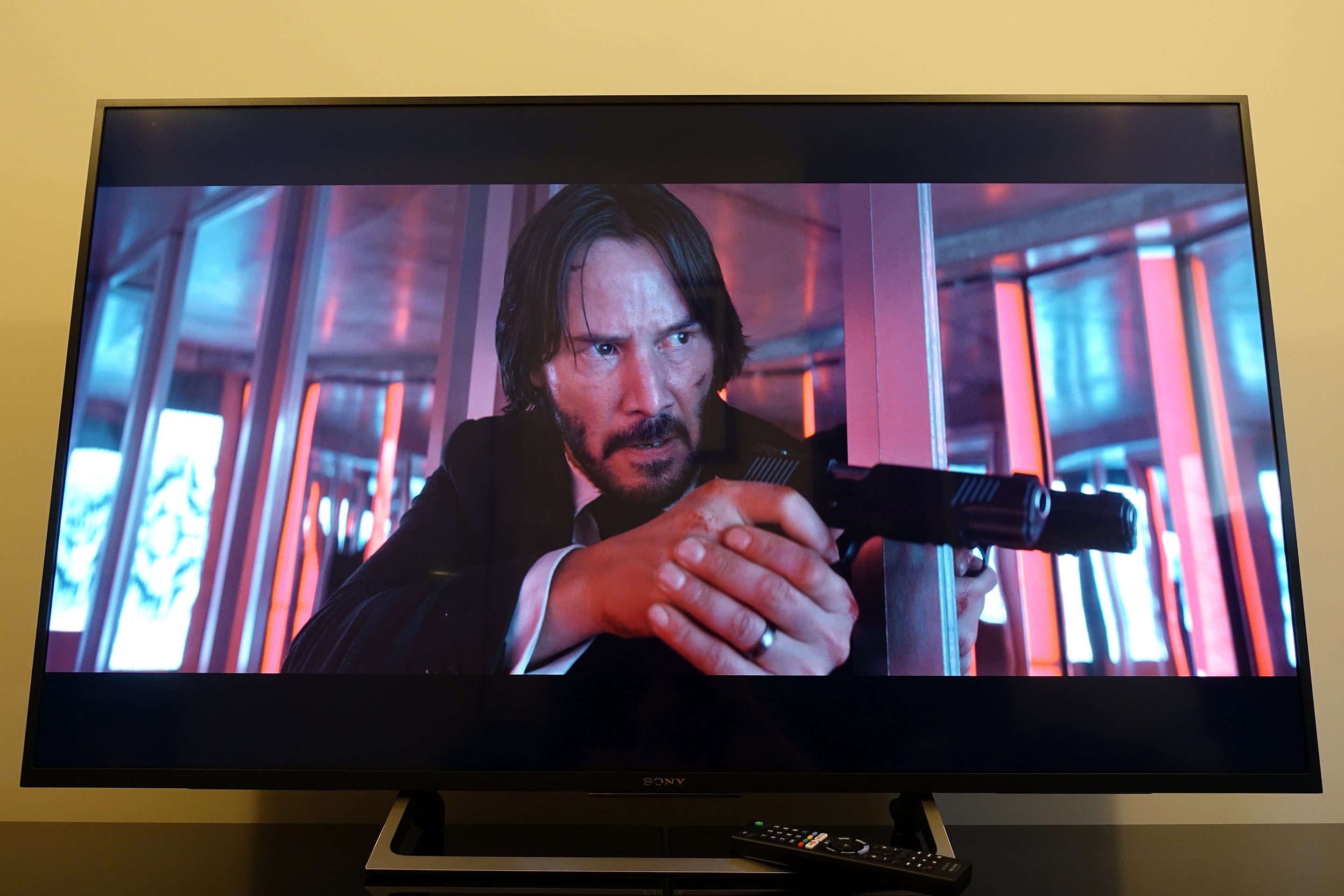 Contrast is strong for an LCD TV. There is a clear difference between shadows and areas that are supposed to be bright, and whether you watch TV with the lights on or off, the picture rarely ever looks flat or washed out.

That’s all the more impressive considering the XE70 doesn’t employ any sort of local or zonal dimming – the XE70 uses frame dimming, which isn’t as precise and cannot darken specific areas. The blacks are never properly black, but they’re deep enough not to distract, at least if you are watching standard dynamic range content.

This is partly down to the fact that the TV never gets that bright; the 370-nits peak I measured is the absolute maximum, with the TV generally operating far below that. 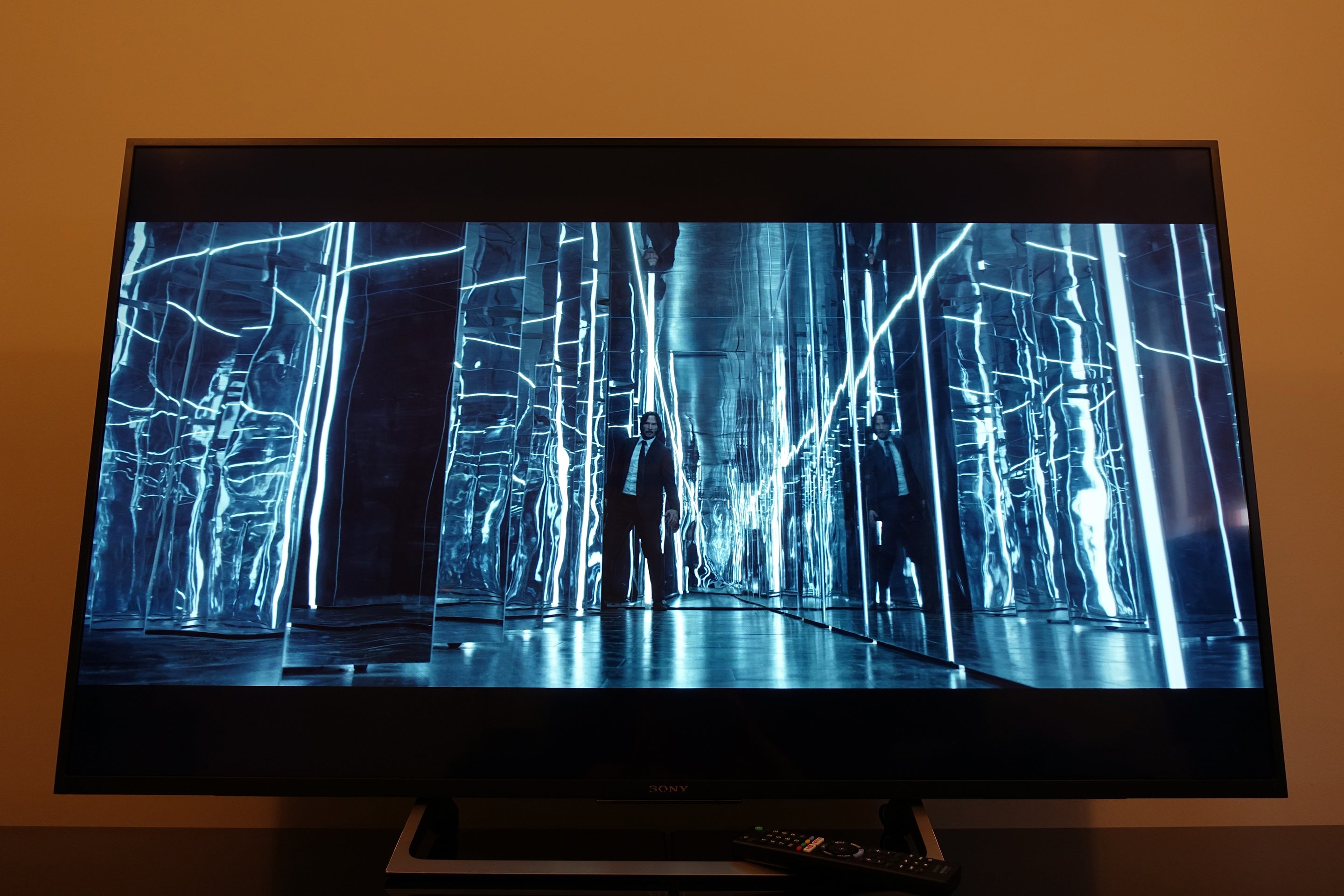 Switch to high dynamic range and the XE70 automatically switches to the HDR preset. You can tweak this, but by default the TV pushes brightness and contrast to maximum. The result: brighter areas benefit from greater colour volume and visual impact at the slight sacrifice of black performance.

Dark details within a picture are generally good. John Wick 2 features an extended action sequence that takes place in dimly lit Roman ruins, and I had no problem making out stone textures in the shadows.

That being said, you’ll notice a bit of greyness if there’s a large area of darkness on screen – such as whenever you watch a widescreen movie with black bars top and bottom. It’s not too noticeable if you watch those movies with the lights on, or if you watch films in full screen format. But if you prefer a pitch-black cinema environment, the greyness is unavoidable.

At least the lighting is uniform. I find uneven lighting to be more distracting than a bit of grey, and my Sony XE70 review unit didn’t demonstrate any ugly light patches. 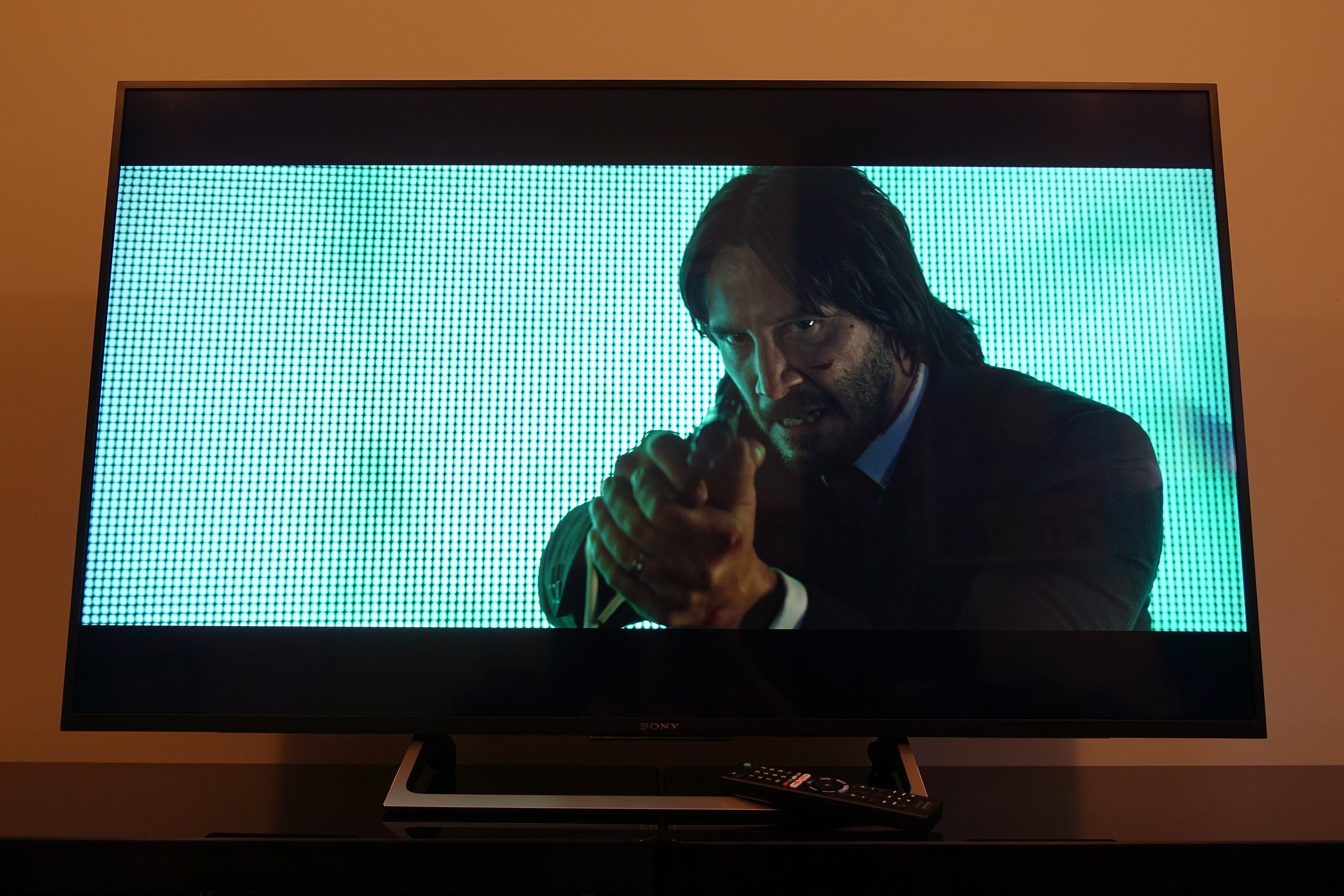 There are some things that can help with the greyness, even if they don’t eliminate the problem. Firstly, turn the brightness down a little. Not so much that it will negate the point of HDR, but pushing it down by 5-10 clicks will help.

Also, the picture settings have Advanced Contrast Enhancer and Black Adjust options. I’d have both set to medium. While you’re there, I’d turn off the motion processing to avoid the overly smoothed, glossy ‘soap opera effect’ that makes your films look like an episode of Coronation Street. 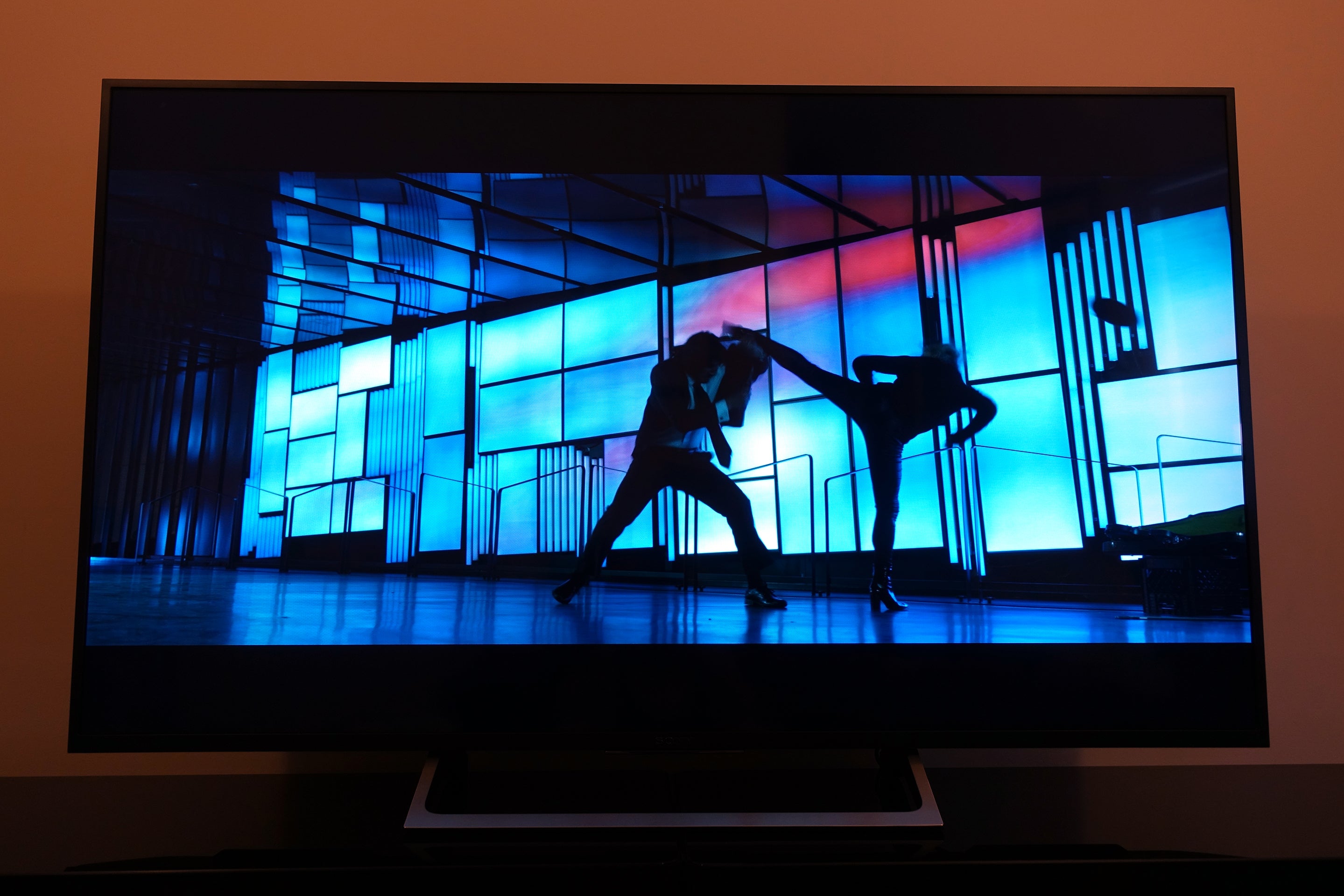 For gamers, I have some good news. Sony has clearly paid attention to latency, because the game mode is very effective. I recorded an input lag of about 22ms. That’s low enough for all but the most competitive gamers. Just add a Ps4 Pro or Xbox One S.

Finally, a word on the sound. The Sony XE70 is capable of putting out a wide soundstage. While its ‘virtual surround’ options don’t actually fill the room, the sound you get is easily wider than the TV it’s coming from. Tonal balance fine for casual viewing, but there’s hardly any weight or dynamism to delivery. For more emotion, or to make the most of loud movie soundtracks, you might want to invest in some good speakers or a soundbar.

Should I buy the Sony XE70?

The Sony 55XE70 punches above its price point. If you’re looking for a 4K and HDR TV without breaking the bank, this is an excellent option. It has a sharp image with impressive colour management, and contrast is good enough to give you a taste of what HDR can do.

A bit of greyness during HDR playback means the XE70 isn’t the screen for hardcore AV enthusiasts. But for anyone wanting to upgrade from an old HD model, this provides a taste of the next generation. It’s also hard to argue with the ratio of quality to screen size and price. The Sony KD-55XE70 tested here is a very proficient 55-inch model, and the fact that it can be had for under £1000 is to be applauded.

If your budget can stretch, it’s worth checking out the Sony XE85, which benefits from better blacks and more comprehensive app support.

The Sony XE70 is a great-value TV for those looking for a taste of 4K and HDR.