The Sony WI-1000XM2 are among the most effective in-ear noise cancelling headphones available. Noise-cancelling performance is excellent and despite not being intended for running, they work well enough. While sound quality is mostly good, they're undone by a treble performance that's on the forced side

The Sony WI-1000XM2 are high-end neckband headphones, and for £300 you get just about the best active noise cancellation you’ll find in an earphone. The Bose QuietControl 30 are the only major rival, at £50 less.

These earphones also have great bass and stereo imaging for an in-ear pair. But given the high price, their relatively short battery life is disappointing and they need a little more finesse in the higher frequencies.

I’m glad to see a pair like the Sony WI-1000XM2 arrive. Judging by the stream of new earphones you might think people only want true wireless sets in 2020, but they still have drawbacks – not least how easy they are to lose under sofa cushions.

The Sony WI-1000XM2 are a bit more traditional. A band runs around the back of your neck and big plastic lozenges sit by your collarbones. These hold the electronics, battery and so on. 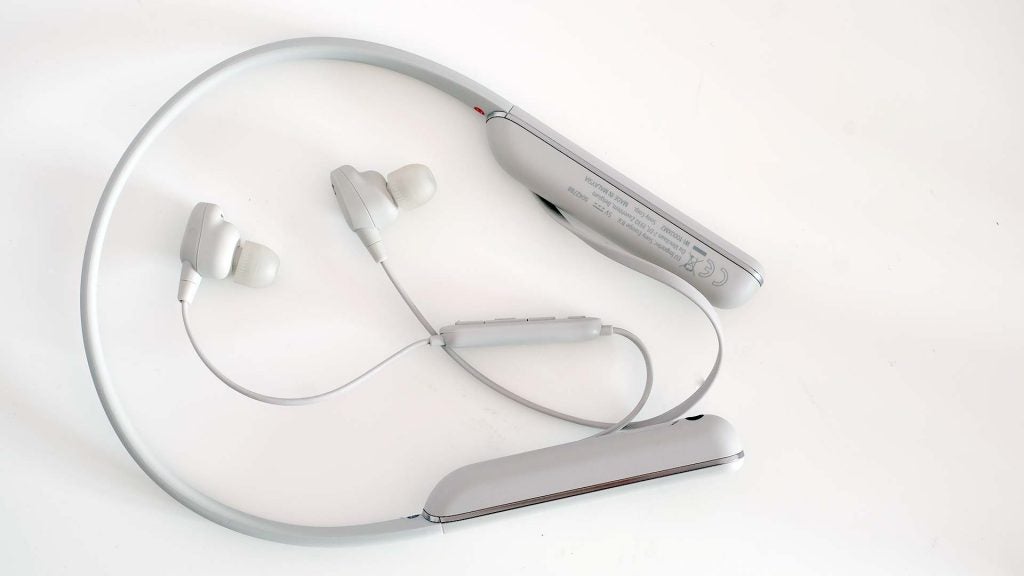 This is not the prettiest style of earphone, but is fairly practical. When not listening to music you can leave the earpieces dangling below, and they stick side-by-side with the help of a magnet . At first glance the Sony WI-1000XM2 look like plastic earphones, but about half of the outer casing is painted metal.

The large chunks of plastic at the ends of the neckband made me think the Sony WI-1000XM2 would not be much use for running. Several pairs I’ve tested like this recently simply refuse to stay in place on your neck when you move too much. 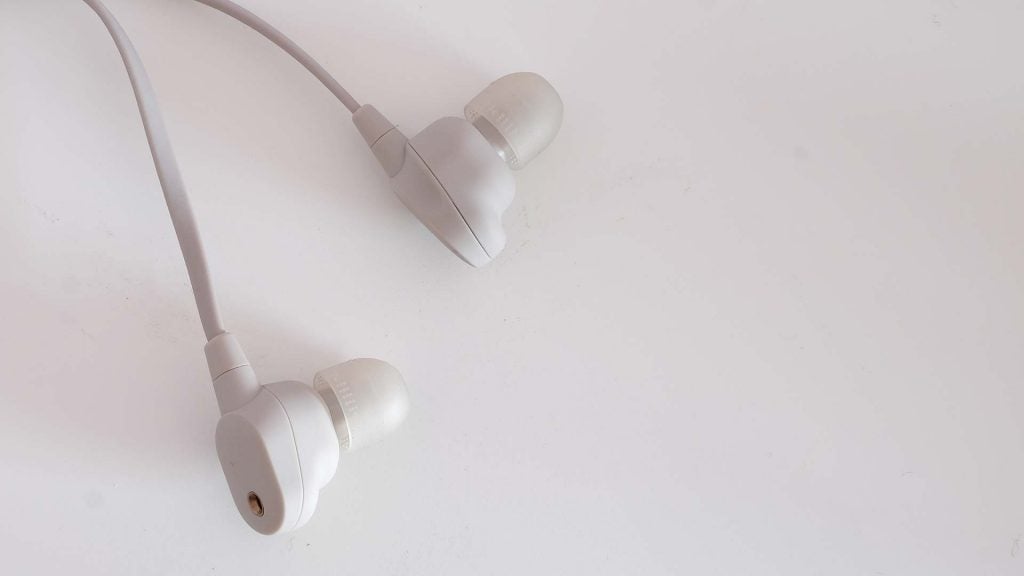 That is not the case here. The Sony WI-1000XM2 stayed happily in place over the course of a 40-minute run, and those blocks do not bounce around too much either. These are predominantly travel headphones, but they aren’t too bad during a workout. Be careful, though. They are not at all water resistant.

“The unit is not waterproof. If water or foreign objects enter the unit it may result in fire or electric shock,” says Sony.

I don’t believe the situation is as bad as that sounds, though. These headphones have a lined bung to cover the USB-C socket. 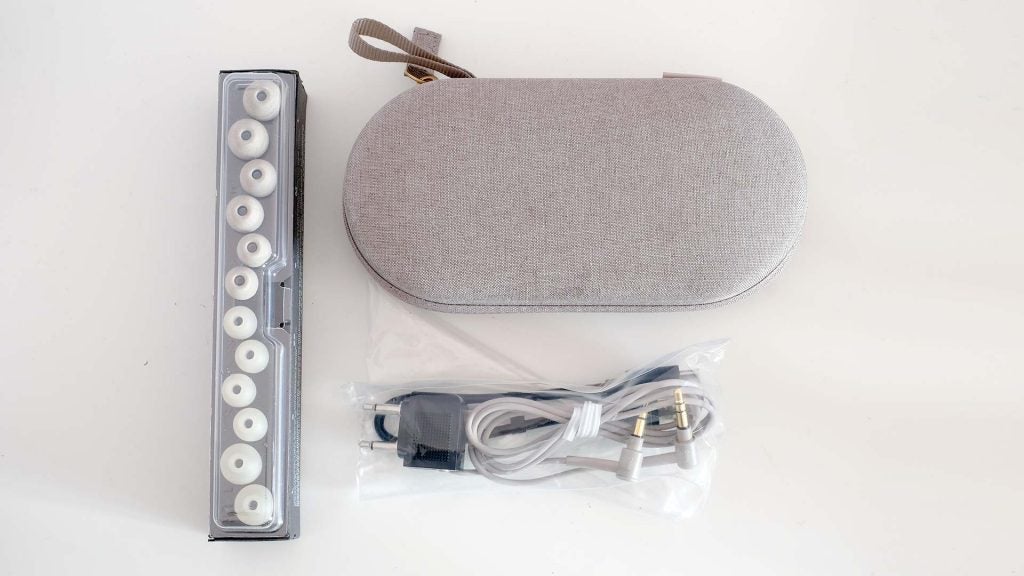 Sony does its best to ensure you get a good ear tip fit too. It includes both silicone and foam kinds in the usual sizes, and the foam is quite different to the usual (and great) Comply foam style. You don’t compress these tips to put them in your ear. Its squishy, fast spring back is more like latex foam, so you can just bung them in your ears.

Other accessories include a carry case, airplane adapter and an audio cable, so you can plug the Sony WI-1000XM2 in when you run out of battery, which is quite unusual for a wireless pair of earphones.

It’s important too, because battery life is not that good. You’ll get around 10 hours’ use with active noise cancellation turned on, or 15 with it off. When some pairs of sub-£100 neckband earphones smaller than these manage to last longer than 24 hours, this does not seem great. You have no better like-for-like option right now, though. The Bose Quietcontrol 30 only last 10 hours too. 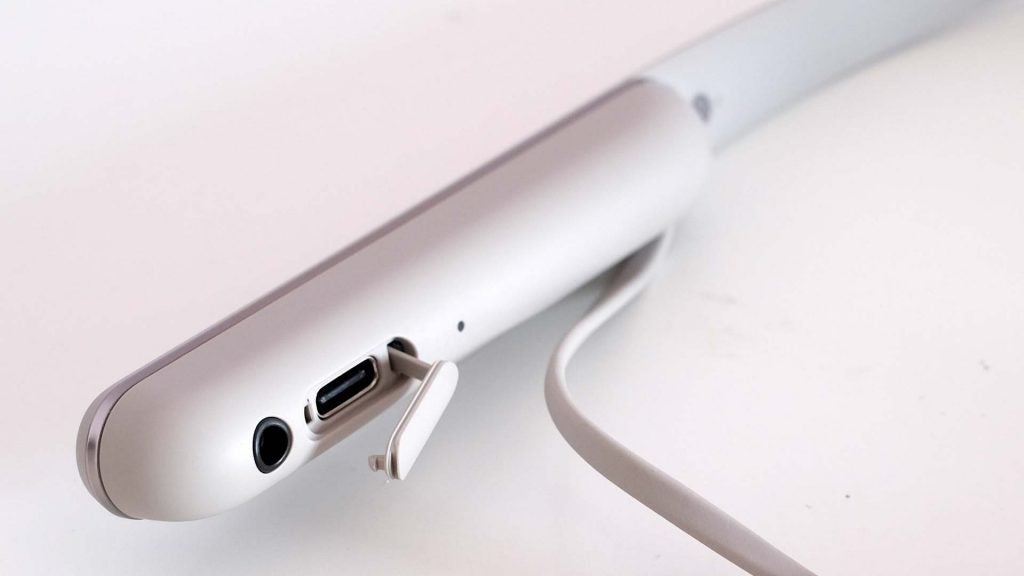 The Sony WI-1000XM2 are some of the best active noise cancellation earphones you can get. They outperform some full-size ANC pairs.

Most manage to eradicate the low-frequency growls of bus and airplane engines, or the aural chaos of the tube. But the Sony WI-1000XM2 have an effect similar to the real world-beaters from Bose and Sony. They extract you from stressful environments to an extent, by also minimising mid-range noise that makes it through to your ears.

ANC is never effective at tackling high-frequency sound, but the Sony WI-1000XM2’s tips take the edge off this too by simply blocking it. As such, these are some of the best earphones for noisy commutes and plane travel. 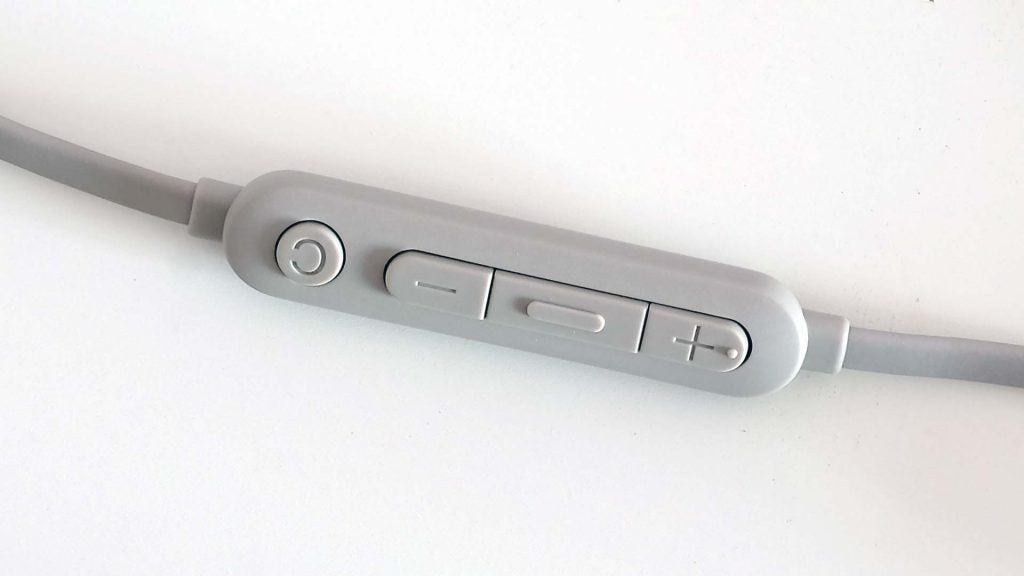 Controlling the noise cancelling feature is easy. There’s an in-line remote on the Sony WI-1000XM2’s cabling. It has the usual three buttons that control volume, accept calls and switch tracks. And there’s a fourth button for noise cancellation. This switches between the Ambient Sound mode, ANC on and ANC off.

Ambient Sound lets through some external noise so you can hear train announcements or sneakily listen to conversations. You cheeky thing. This isn’t quite as good as the ultra-natural sounding ambient mode of the Beats Solo Pro, but is above average. It effectively replaces some of the higher frequency sound blocked by the tips. 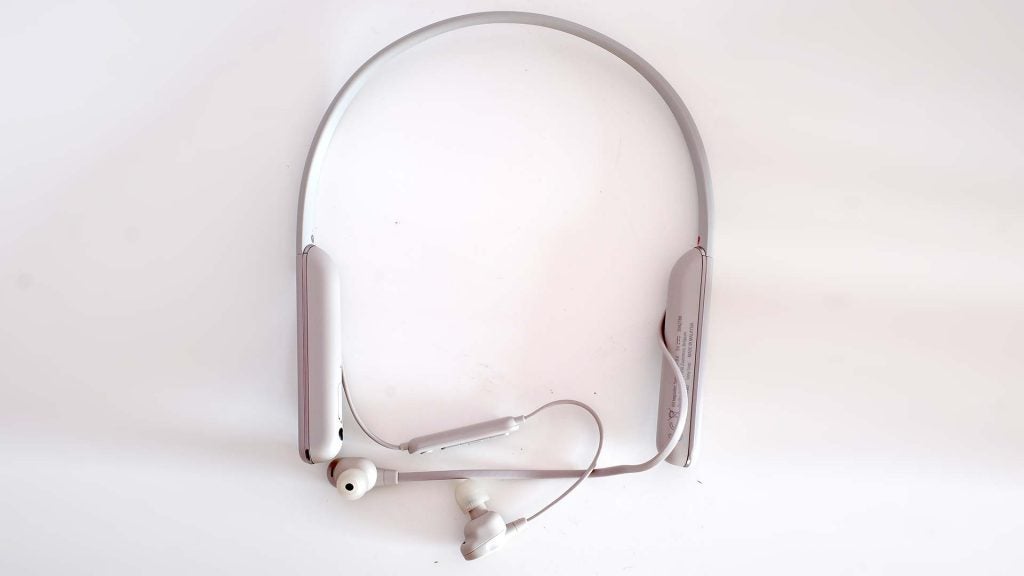 Wireless tech specs are, typical for Sony, very good if idiosyncratic. They use Bluetooth 5.0, have NFC for quick pairing with Androids and support Sony’s LDAC format for high-resolution streaming.

You don’t get aptX or aptX HD, but LDAC is supported widely across Androids nowadays. My Oppo A5 2020, hardly a top-tier mobile, can use LDAC just fine.

The Sony WI-1000X were among the better-reviewed earphones of 2017. This new pair uses a similar “hybrid” speaker system, which consists of a 9mm dynamic driver for the low frequencies and a balanced armature for the higher ones.

Sony has made some of the most highly-regarded mainstream headphones of the last few years, so I was a little surprised by the issues I have with the Sony WI-1000XM2 sound, but let’s start with the good elements. 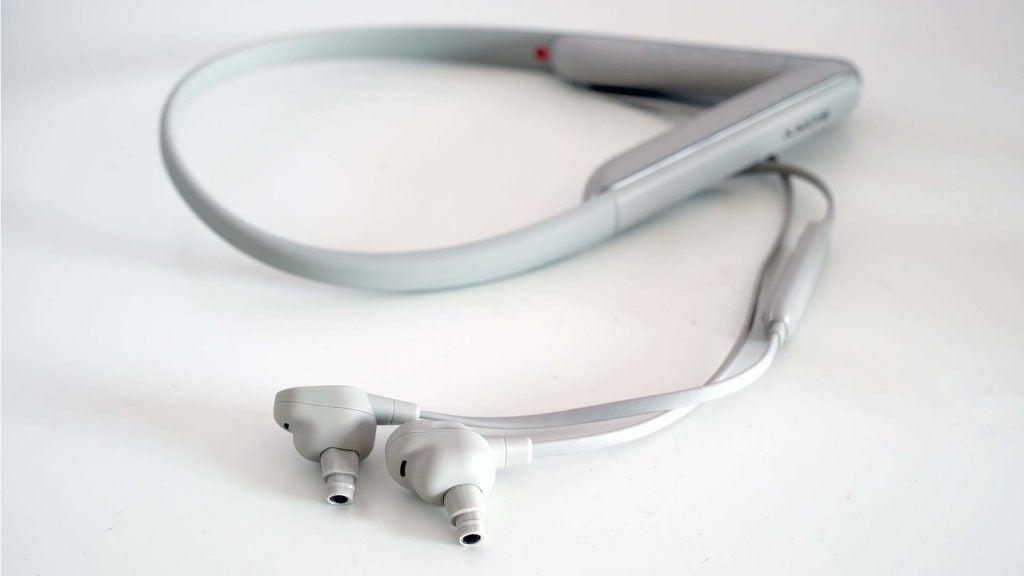 The Sony WI-1000XM2 have great bass. It is deep, reactive and powerful. There’s good scale to the sound too, for an in-ear headphone.

Detail is excellent, and Sony actively wants us to appreciate it, with enlivened treble.

However, I hear a disconnection between what I take to be the output of the armature and the dynamic driver. Whether it’s actually down to driver integration issues or tuning, the treble seems a distinct entity, not quite part of a coherent whole.

Sony has arguably gone too far in pushing treble detail, as the Sony WI-1000XM2 have more sibilance and high frequency hardness than I’d expect from a £300 earphone.

There are impressive elements here, but the treble is just a little too tiring and not well integrated enough given the price. 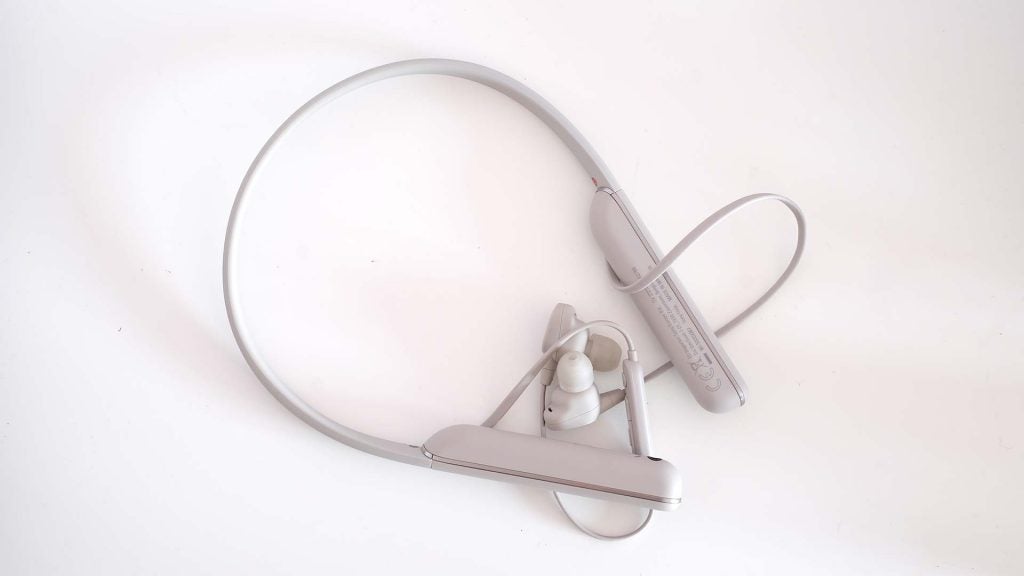 The Sony WI-1000XM2 are among the most effective in-ear noise cancelling headphones available, rivalled only by the Bose QuietControl 30.

They are also pass the running test, although aren’t ideal for exercise use as they have zero recognised water resistance.

Their sound quality is great in some respects, but treble presentation is a little forced, resulting in sibilance, at odds with the cost.