What are the Bose QuietControl 30?

As alluded to by their name, Bose’s QuietControl 30 headphones are the company’s first active noise-cancelling headphones that give you granular control over the level of noise blocking. This means that, unlike with Bose’s other ANC headphones, such as the QuietComfort 35, you can decide to have just a little ANC or dial them all the way up for some blissful silence.

While not everyone is fond of ‘collar’ headphones, the QuietControl 30 do offer a solid alternative form factor to Bose’s over-ear and in-ear wired ANC offerings, even if the level of active noise cancellation doesn’t quite match up.

Collar headphones, sometimes referred to as neckband headphones, have always been a little divisive. Personally, I’ve never been massively fond of them, having tried a few over the years – including the Samsung Level U Pro – not just for the way they look but also for their practicality. In the case of the QuietControl 30, the form factor is at least understandable considering the ANC and wireless elements.

My problem with collar headphones is that the rigid collar part isn’t always the most practical. It’s designed to sit behind your neck, much like a collar, hence the name. But they always have a tendency to gradually rotate around your neck throughout the day or you find they get caught on items of clothing. 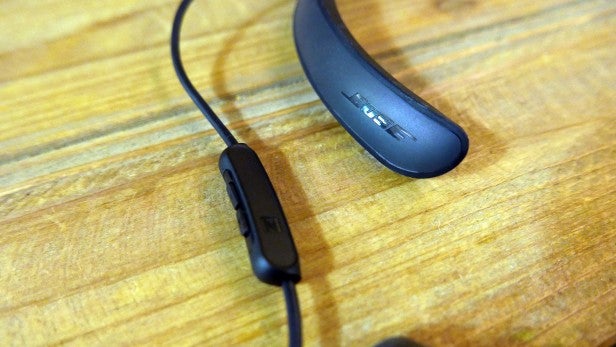 I more often than not wear a collared shirt or suit jacket, so find myself struggling to get the collar part to sit comfortably. With the weather currently taking a colder turn, I now have the additional struggle of dealing with a scarf at the same time. Not everyone will find this an issue, but it’s worth keeping in mind.

Bose already sells in-ear ANC headphones in the form of the wired QuietComfort 20, but these have a somewhat bulky box that houses all of the ANC controls and power near the 3.5mm jack. With the QuietControl 30, all of the ANC smarts are stored in the collar section, with the headphones connecting to your audio source through Bluetooth.

The actual collar part is made from a rubbery material, which I thought would’ve done more to stop the collar slipping around my neck. The collar does at least mean you can remove the earbuds and let them hang free without worrying about them, but it’s a shame there are no magnets in the earbuds to keep them attached to one another, stopping them flapping around.

On the collar you’ll find the power button as well as a Micro USB port hidden away to charge the headphones. The standard media playback controls and microphone are on the cable connecting the right earbud. Along the edge of the remote is another set of controls for adjusting the level of active noise cancellation, allowing you to turn it down when needed. Handy if you’re listening out for a public announcement, for example. 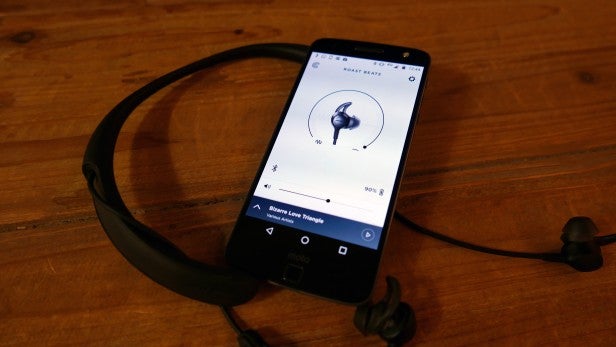 You can also control this from the companion Bose Connect smartphone app, which also handles any firmware upgrades for the headphones. I had to install one out of the box, although I’m not entirely sure what it did.

The earbuds are really very comfortable, and their design will be familiar to anyone who’s ever worn Bose in-ear headphones before. The oval-shaped earbuds are made from a soft silicone material, and a range of sizes are included to suit most ears.

There are wingtips that help lock the earbuds in your ears, and I never had any problems with them becoming loose. The earbuds don’t create the tightest of seals, so there’s not much in the way of passive isolation, but that’s why you have the active noise cancellation. 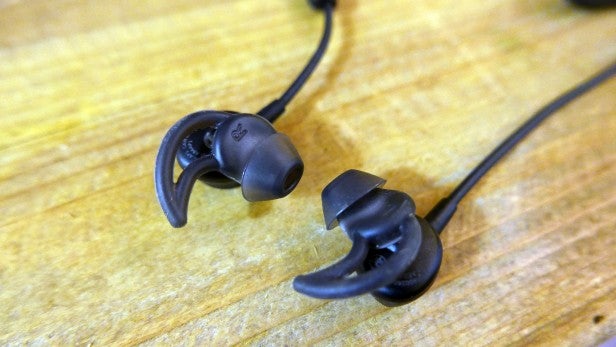 Although the earbuds are locked in securely, I wouldn’t recommend trying to run with the QuietControl 30. That rigid collar bounces around and it proves a distraction. Bose have non-ANC headphones with sweat resistance, such as the SoundSport Pulse, that are better suited. 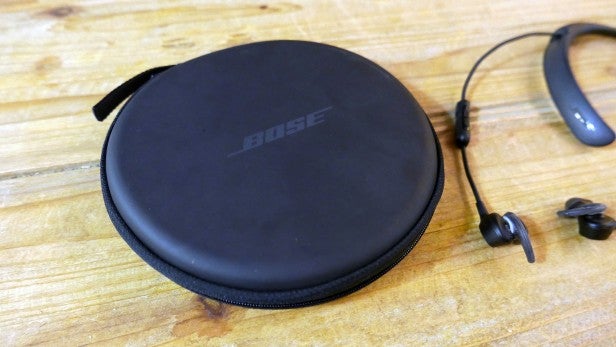 A convenient hard case is included to stow the headphones away safely. I’d definitely recommend using it rather than throwing the headphones haphazardly in a bag, as the collar is going to be susceptible to getting crushed.

Unlike the QuietComfort 35, I found the QuietControl 30 gave the slight in-ear pressure sensation associated with many ANC headphones. It’s not too uncomfortable in this instance, and you quickly forget about it as soon as music starts playing.

The level of ANC when dialled all the way up also doesn’t quite rival that of the QuietComfort 35, nor the fantastic Sony MDR-1000X for that matter. It’s not far off, but a little more irregular ambient noise does tend to still slip through. By the very nature of ANC headphones, they’re never going to be able to block everything entirely anyway.

But when it came to wearing the QuietComfort 30 on the bus or train, they still did very well at removing the more predictable sounds of the engine and vibrations. Even in an office environment, removing the earbuds makes you realise how loud the air conditioning unit is, or how many keyboards are chattering away in unison. 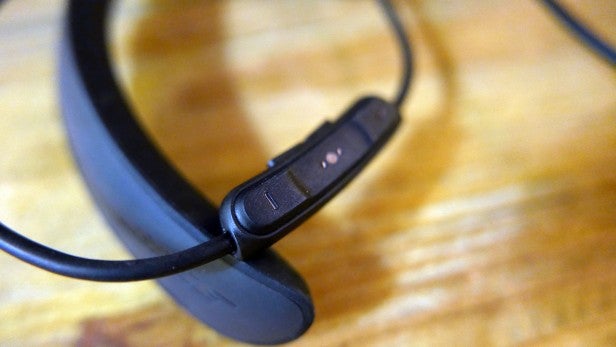 Being able to adjust the level of ANC wasn’t as useful as I thought it would be. I rarely ever dialled it down and just left it turned up. For those who do need more situational awareness, there are 12 levels of adjustment ranging from fully open to maximum ANC.

Hands-free calling is very good, helped by the array of microphones used for the ANC. Callers could hear my voice clearly and the ANC helped me to be able to hear them as well.

If you’ve heard any of Bose’s other headphones, you probably have a decent idea of the sound signature of the QuietControl 30. There’s no particular colouration, but it leaves them sounding a little bit lifeless.

There’s not quite enough bass presence for my liking, especially compared to the QuietComfort 35, which managed the lower frequencies far better. There’s also not much separation of the lower frequencies from the mids, and there’s a slight lack of depth to the sound. That’s not to say there’s little overall enjoyment – these still sound decent enough, just not quite as good as the QuietComfort 35. 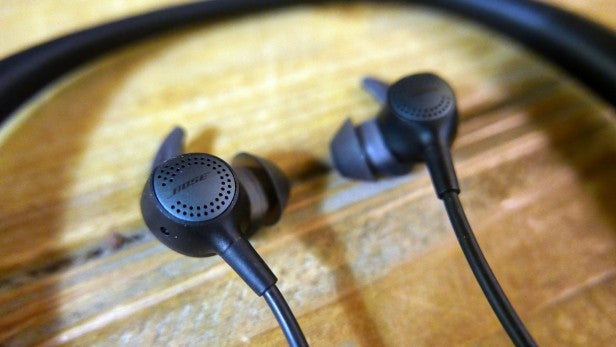 In keeping with Bose’s other wireless headphones, there’s no Bluetooth aptX support, which is a shame but probably not a major omission. There’s the usual Bose volume-optimised EQ going on in the background, which is designed to regulate audio performance regardless of volume, and this does well at stopping your music sounding thin and hollow whenever you need to turn the volume down.

The QuietControl 30 are rated for 10 hours of use, which felt about right. I could almost make it through a week’s worth of commuting before needing a charge. A Micro USB cable is included for charging, and you can stow this away in the included hard case.

Unlike many of Bose’s wireless headphones, there’s sadly no wired passive mode to fall back on when the battery dies.

Should I buy the Bose QuietControl 30? 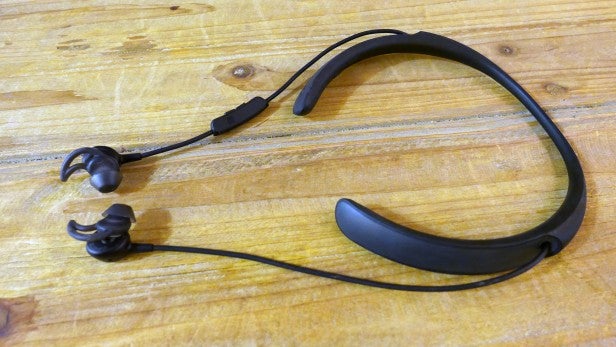 If you don’t mind the collar-style design, the Bose QuietControl 30 offer decent active noise cancellation and respectable sound quality. The form factor is much more portable than that of on-ear headphones, so you might appreciate being able to more easily throw these into a backpack.

Still, personally, at £230 I feel these are a little pricey considering the level of ANC doesn’t rival that of the QuietComfort 35. Frequent fliers should also keep in mind that, unlike the wired QuietComfort 20 or wireless QuietComfort 35, there’s no wired option to plug these into an in-flight entertainment system, nor is there a passive audio mode for when the battery runs out. So if you plan on using your headphones in this scenario, you’re better off looking elsewhere.