What is the Sony SRS-XB3?

The Sony SRS-XB3 is a fairly small wireless speaker. It wants to be used anywhere and everywhere: while you’re in the bath, beside a swimming pool in Tenerife, or just as you cook your evening meal.

Sony’s special move is to use slightly larger drivers than the competition to achieve a meatier, more powerful delivery. And it works.

The Sony SRS-XB3 is a great little speaker for noisier environments. However, some rivals display more clarity and finesse if you’ll mostly be listening indoors. At the time of writing, the speaker can be picked up for £89.99 rather than its £129 RRP – and at that price it’s a good deal. 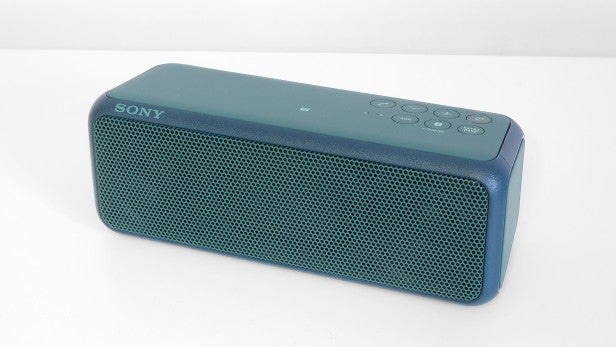 Quite a lot of speakers in this class are made of metal. The Bose SoundLink Mini series drew up a blueprint that others have tweaked, but Sony isn’t playing copycat.

The Sony SRS-XB3 is made of plastic and rubber, injecting a touch of personality with colour instead. There’s the dark-green version seen here, as well as black, red and blue. All but the red are quite moody and subdued in tone, leaving the red version for those who are after something that really stands out.

A plastic frame isn’t exciting, but the Sony SRS-XB3 feels like it could withstand being thrown against a wall. The plastic is thick, and will easily handle being scraped carelessly across hard surfaces much better than aluminium. 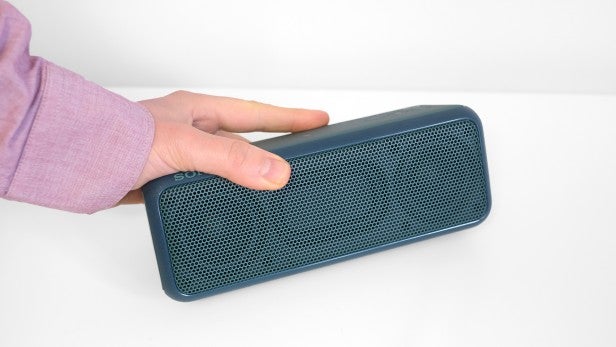 The speaker appears to be far better equipped for outdoor use than most, and is also water-resistant. The Sony SRS-XB3 is certified to IPX5, meaning it can handle rain or being splashed, but it can’t be submerged. Actual IPX5 testing involves spraying the speaker with 12.5-litres of water a minute for three minutes at a distance of 3m.

What enables this water-resistance other than a clever speaker grille is the port protector on the rear of the device. A rubber-sealed panel pulls off to reveal the charge socket, aux input and a USB port with which you can charge other devices. 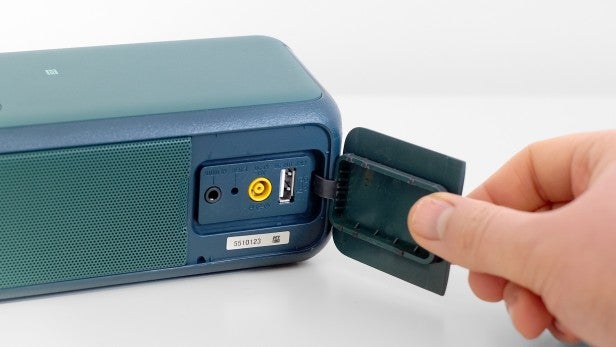 One part of the Sony SRS-XB3 that might disappoint is its use of a 15V cylinder charger rather than the USB kind used by Android phones.

However, this lets Sony include a large battery that doesn’t take an age to charge. The speaker lasts for up to 24 hours at moderate volume, which is excellent. Some this size last for only eight hours – BUT to be honest, I’ve been happy with just that much in the past.

This is a side benefit of the Sony SRS-XB3 being slightly larger than some ultraportable Bluetooth bricks. It’s bigger than favourites that include the Bose SoundLink Mini II, Riva S and Jam Heavy Metal, but will happily fit into my luggage for a work trip or weekend away. Just. 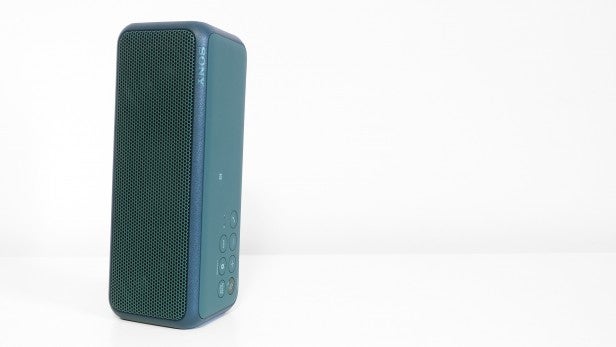 The Sony SRS-XB3’s controls are entirely obvious, valuing practicality over design impact – just like the construction. A bunch of buttons let you alter volume, enter pairing mode, take calls and turn the extra bass mode on and off. They couldn’t be much clearer.

One that might get you scratching your head is “Add”, though. This is used to join up two Sony SRS-XB3s as a stereo pair. I don’t think all that many buyers will end up acquiring two of these speakers for that purpose, but it makes linking them up simpler than most others – which tend to require some fiddling in apps or button combinations.

There are other extras, too, including NFC for easy pairing with Android devices and a speakerphone function. This means there’s an integrated mic, letting you take calls by just talking to the speaker. There’s a “call” button up top, too. Solid, dependable, practical. That’s what the Sony SRS-XB3’s hardware is about. 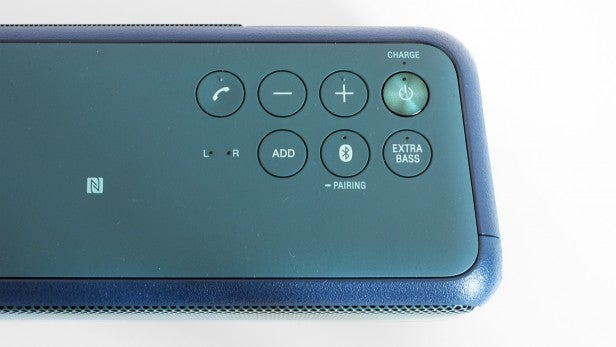 The Sony SRS-XB3 sound is different to many rivals, with Sony’s aim to outgun the competition. You only need to look at the drivers for proof. The Bose SoundLink Mini II has a pair of 38mm active drivers and a radiator array; the Sony has 48mm drivers and bass radiators, the main reasons why the SRS-XB3 is a little larger than most such speakers.

Its sound is more powerful than most, too. Larger drivers let it go louder with fewer signs of strain, and bass depth and clout is very good for a still-small unit. The tiny Bose SoundLink Mini’s bass is deeper-sounding, though – a surprise given it’s significantly smaller.

If you haven’t used one of these small rectangular Bluetooth speakers before, I think you’d be pleasantly surprised by any of the better models, this one included. The Sony SRS-XB3’s parlour trick is that it can be pushed harder before it actually sounds like it’s being pushed, meaning the start of obvious compression and/or distortion.

The sound is thick, too, which helps it deal with noisier environments. Small speakers can get lost in noisy rooms, but this one could shout over the noise of a small house party.

Use the Sony SRS-XB3 in a quiet indoors setting, though, and you start to hear some of its shortcomings.

Using the Extra Bass mode confuses the sound from the SRS-XB3. It gives bass drums more obvious punch, but mainly because it boosts mid- and mid-bass frequencies to act as a “loudness” booster, making the SRS-XB3 appear louder at the same output level.

These are serious problems if you’re looking at the Sony SRS-XB3 at its RRP of £130, but since it’s available right now for around £90, the significance of these sound issues evaporate somewhat. 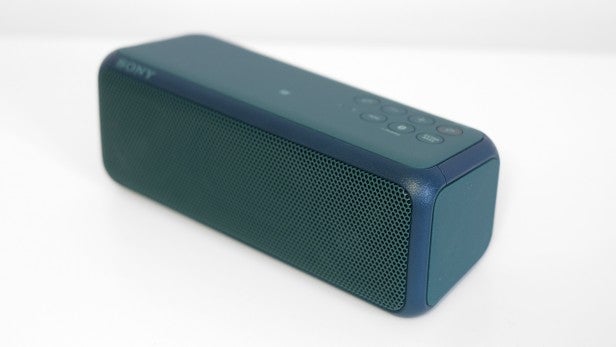 Should I buy the Sony SRS-XB3?

At £130, the Sony SRS-XB3 is only a fair buy. However, it’s far more attractive at the £90 for which it can be had at the time of review. At this price its main competition is the Jam Heavy Metal, a speaker with less power, bulk, battery life and ruggedness, but greater treble detail, an all-round cleaner sound and still excellent top volume.

The UE Boom 2 is also a significant rival, offering water-resistance and a similar, hardwearing plastic style. That speaker has many fans but I’d likely pick the Sony SRS-XB3 over it for being cheaper and sounding less strained at high volumes.

For pure sound quality the SRS-XB3 comes nowhere close to the Riva S, though, which at a recently reduced price of £155 looks like a more attractive proposition if you can afford a little more expense.

A super-powerful and portable – if not always subtle – wireless speaker.