What is the Bose SoundLink Mini II?

The Bose SoundLink Mini II is a small Bluetooth speaker. It isn’t small enough that you’ll carry it with you every day, and you’re definitely not going to fit it in a pocket.

However, it’s about as small as a speaker can get without compromising on sound quality. And if you haven’t heard one of these small size, big output speakers before, you’ll most certainly be impressed by how good the Bose SoundLink Mini II sounds.

Cheaper rivals are available, but if you’re after powerful bass in a tiny box then the Bose SoundLink Mini II is worth its £169 asking price.

The Bose SoundLink Mini II looks and feels much the same as the first SoundLink Mini. It’s a lightly curved brick of aluminium, small enough to grasp easily in one hand, but it’s too long and deep to fit in a pocket.

This doesn’t rule it out as an ultra-portable speaker, though; you’ll just need to put it in a rucksack.

It might also be worth investing in a Bose rubber cover for your speaker. While the SoundLink Mini II feels superbly well made and pretty tough, its aluminium outer shell will probably show up damage pretty readily. 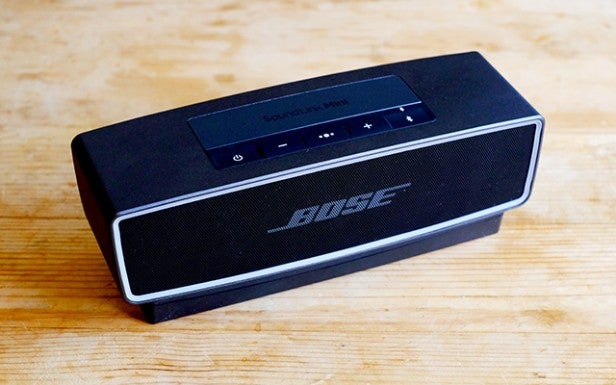 Fresh out of the box, the Bose SoundLink Mini II is of the perfect size for “around the house” portability. And for its charging dock it wins bonus points.

Rather than using a charging cable – although this is an option – you can place the Bose SoundLink Mini II onto a plastic dock. This charges the unit on contact, thanks to metal contacts on both the dock and the speaker.

As with the original Bose SoundLink Mini, rubber-topped buttons sit on the top plate. 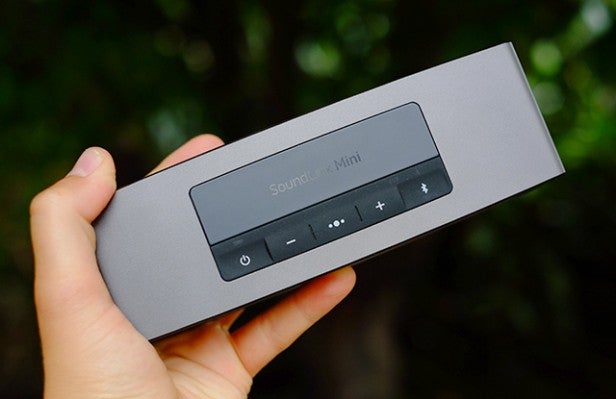 So far, so familiar. But what’s new in this second version of the SoundLink Mini? The good news is that Bose has addressed virtually all of the hardware complaints about the first version.

First, rather than using a cylindrical charge plug, the Bose SoundLink Mini II uses the micro-USB standard. This means that owners of Android handsets will be able to use their phone charger to power up the battery. 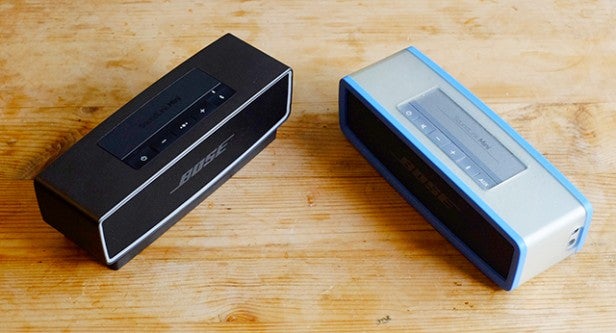 The original is on the right, with one of the optional rubbery cases attached

There are charge ports on both the dock and the speaker itself, providing plenty of flexibility. Using an external battery to juice up the Bose SoundLink Mini II is also an option.

By adding a microphone to the speaker, the SoundLink Mini II can also now be used as a loudspeaker for phonecalls.

There’s still no NFC for easy pairing, but there is a new voice system. A slightly robotic-sounding woman reads out the battery level when the Bose SoundLink Mini II is turned on, alongside the names of connected devices. It sounds rather like an electronic train announcer giving a roll-call of stations. Two devices can be paired at once, although you can play audio from only one at a time. 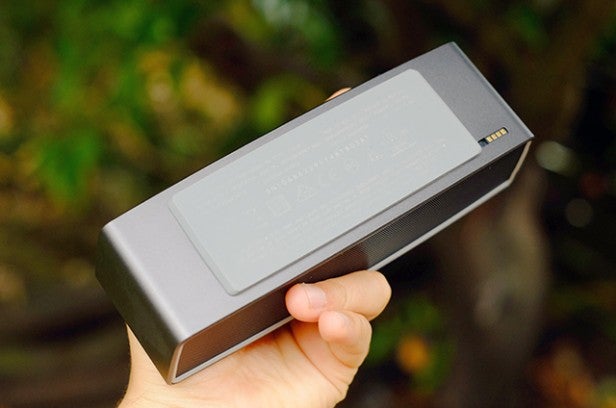 Other optimisations for 2015 include a simplification of the buttons up top: the dedicated Aux button has been ditched in favour of a system that automatically switches to the Aux input as a device is plugged in. Like most wireless speakers, the Bose SoundLink Mini II has a 3.5mm jack input on the side that lets you plug in anything that doesn’t have Bluetooth. 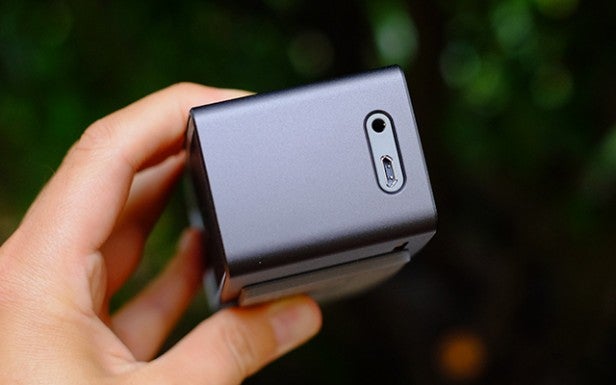 Battery life has improved, too, from a quoted 7-8 hours to 10 hours. You won’t get that long if you blast the Bose SoundLink Mini II at full volume, however. Although having used the speaker for almost-full days on a couple of occasions, we can say that we’re pretty happy with its stamina.

The Bose SoundLink Mini II still doesn’t support aptX – the higher-quality codec than the Bluetooth standard SBC. However, it would be somewhat limited in a speaker  trying to deliver a big sound from such a tiny box.

Bose hasn’t made any radical changes to the sound signature of the Bose SoundLink Mini II. Nor should it have.

The Bose SoundLink Mini II is an astonishingly bassy and powerful-sounding speaker for its size. It doesn’t quite fit the grown-up Bose image; we’d describe it as boisterous. But it’s certainly good fun. 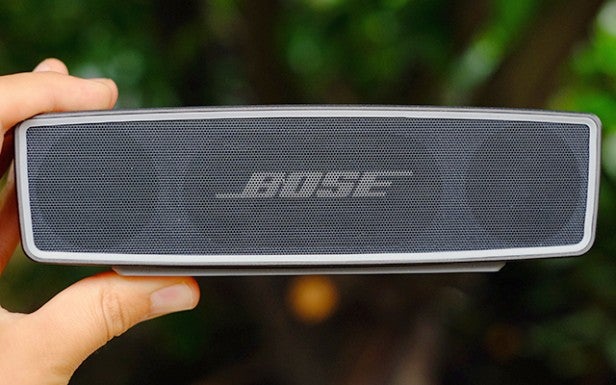 Detail is good too. The SoundLink Mini II delivers a smooth and well-textured tone, with decent mid-range presence that isn’t only about pounding out bassy beats. Vocals are both full and natural, without being softened by too much mid-bass.

There are plenty of competitors in this size and class of speaker, including the Pure Voca, the Denon Envaya Mini and Jam Heavy Metal. However, the Bose SoundLink Mini II trounces them all when it comes to sound quality with deeper bass, silkier mids and smoother treble. Admittedly, it’s significantly more expensive too. If you’re on a budget then you can get comparable – but not quite as good – options for around £90-£100.

All these speakers manage to crank out sound much larger than their stature because they use passive radiators. These aren’t traditional speaker drivers, but complement standard drivers, exponentially increasing the low-frequency sound they’re able to output.

Since Bose has aced this radiator-led style so well, you’ll really need to find a good traditional driver speaker to get much better sound. And this, in effect will mean a larger box. The Loewe Speaker2go is a great alternative, available at a similar price, but it’s quite a lot larger – although larger speakers are able to deliver better bass.

While the Bose gives the impression of having deep and full bass, it’s capable of bringing out sub-bass frequencies due to the limitations of its small driver/radiator array. 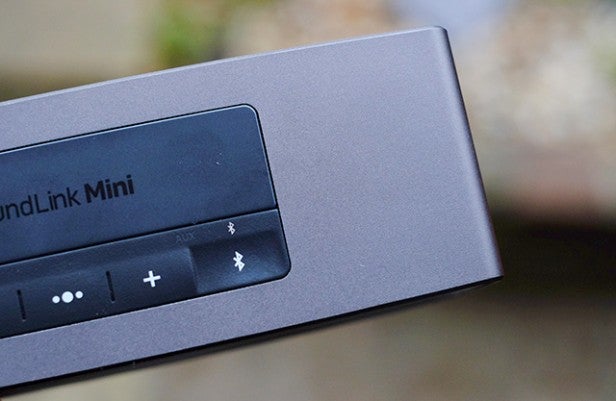 While the Bose SoundLink Mini II looks and sounds much like the original Mini, some audio improvements have been made. Listening closely to the two side by side, Bose seems to have cut down the mid-bass slightly in the new model. While that also reduces the smoothness of the sound in certain instances, it also helps to avoid any sense of congestion. It also improves mid-range clarity and the separation between the mid-range and bass.

It’s also worth noting that while we’ve been a bit sniffy about Bose’s audio style in the past, the wireless speaker space really makes great use of its tricks. A lot of Bose’s audio USP is about psycho-acoustic processing, which uses digital signal processing to charm your ears. It’s about our perception of sound, rather than trying to chase the audiophile’s ideal frequency response.

We get a bit suspicious of this tech when it’s used to cut down the size/quality of drivers in “hi-fi” products, but in the necessarily compromised world of Bluetooth speakers, it works wonders.

With the SoundLink Mini II, Bose has also managed to rid the “sweet spot” – the treble part of the mix that only sounds right in a fairly narrow spot. Naturally, you don’t get a proper stereo image here, but we can’t imagine many people would look to the SoundLink Mini to replace a hi-fi. 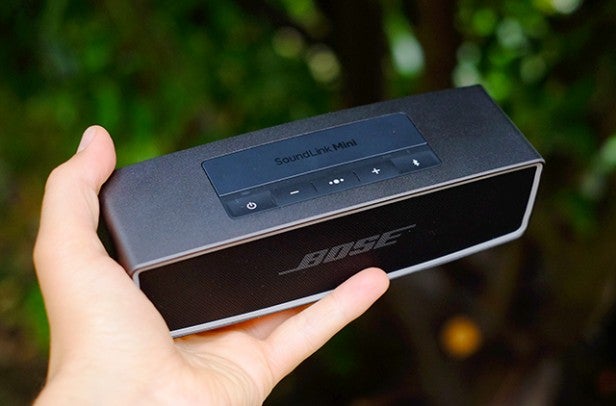 Should I buy the Bose SoundLink Mini II?

The Bose SoundLink Mini II is a tricky product to call. It’s a total class act that makes meaningful changes to the original, including tweaks to the sound quality. It also outperforms just about every other wireless speaker in this size and class, delivering deeper, richer bass from a box that has roughly the same-sized drivers as Denon Envaya Mini.

However, it’s pricier – and there are now several competent alternatives available at around £90-£100. If you don’t think you’ll use a speaker such as this often, these may be a better option. The Denon, for one, is a great choice.

There are plenty of cheaper alternatives out there, but the Bose SoundLink Mini II is the best wireless speaker in this class right now.