What is the Riva S?

At first glance, the Riva S looks just like any other Bluetooth wireless speaker. It’s small-ish and has no obvious design features. This makes it initially hard to figure out why it costs £199, which makes it a full £50 more expensive than the stellar Bose SoundLink Mini II. But you care about sound fidelity then the Riva S more than justifies its hefty cost, and is one of the best Bluetooth speakers around. 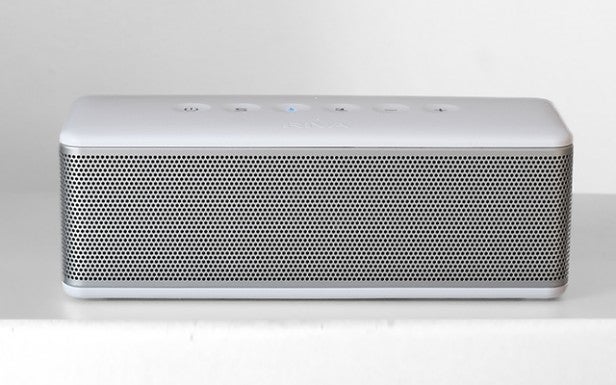 The Riva S didn’t make such a terrific first impression. On first receiving the Riva S, it seemed like just another Bluetooth speaker from a brand that many people haven’t heard of. Its design is also little unsubtle in parts. The bright, light-up capacitive buttons at the top, the labelling of the ports on the rear of the unit and the bright aquamarine rubbery bits on the bottom don’t quite fit with the otherwise sober, grown-up look. 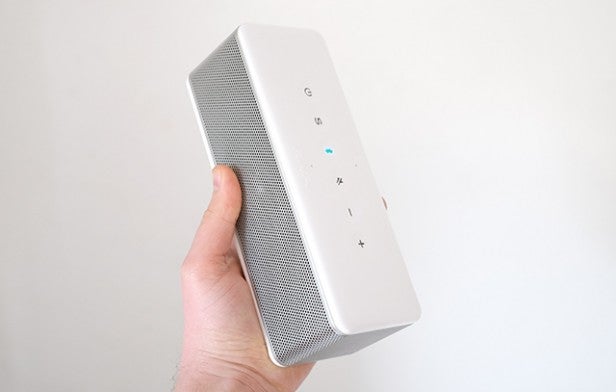 I actually like the two-tone “brick” effect, but the finer points of the aesthetics could do with a tweak. Putting aside its visuals, the Riva S does feel pretty solid.

Its speaker grille is hewn from a single piece of aluminium that curves around the whole box, and while the top and bottom of the unit are plastic. It’s smooth, curvy, glossy and dense-feeling.

My complaints about the style of the Riva S melted into the background following a few days with the speaker.

The Riva S is actually an unusually thoughtful and complete-feeling speaker, particularly for a first-generation product. It’s primarily a simple Bluetooth speaker: you connect your phone, it will play your tunes. However, there are a number of additional features that are worthy of mention. 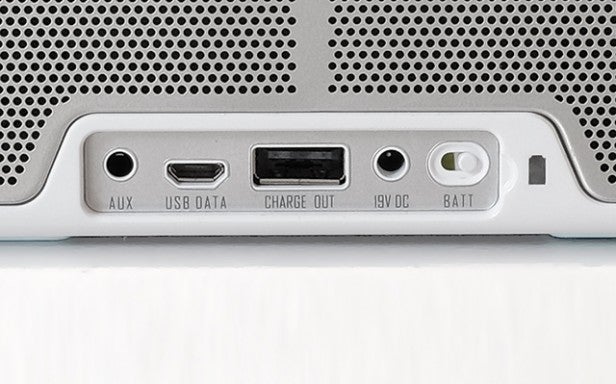 First, the Riva S includes a multi-colour LED battery indicator on the rear of the unit to let you know the rough battery level. A full-size USB on the back also lets you charge your phone from the Riva S. There’s no mention of the mAh count anywhere, but the fact that it lasts for 13 hours at 70dB implies that the battery is a decent size. Note that this is way below its max volume, so you should expect significantly less runtime if you’re going to treat the Riva S as a party speaker.

I’ve been using the Riva S between max volume and about 50%, playing through most of a full work day without it running out of charge. It’s only a pity that the battery isn’t able to charge over USB, even though there’s a micro-USB socket to update the box’s firmware. Instead, there’s a 19V cylindrical adapter included. This will enable it to charge much faster than your average micro-USB adapter, but it’s less convenient.

The other extras are hidden. You can unlock the Riva S’s extra functionality with specific button-presses of the capacitive control buttons up top. These enable you to pair up multiple Riva S’s in stereo or party mode (where they play the same thing), lock the keys, boost the output by 4dB or 9dB and skip tracks. 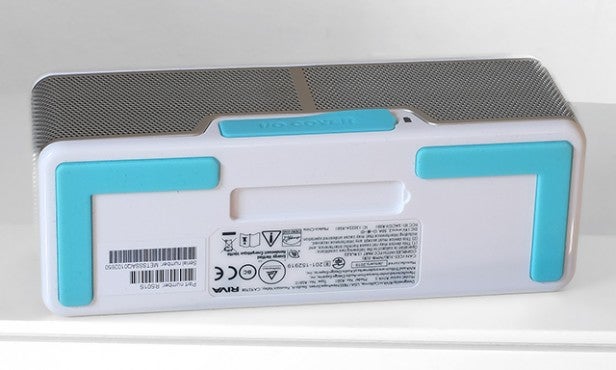 The Riva S is also IPx4 splash-proof. This is all down to a little flap of rubber that sits in the base, but can be pulled out and placed over the sockets. I can’t help but feel that it would be quite easy to lose this flap, but it’s a welcome extra nonetheless.

Out to tick almost every box, the Riva S also works as a handfree/conference-call speaker. It has two pinhole mics on its top, offering noise reduction to make calls at the other end clearer. There’s even a carry case that comes with a carabiner clip, so you can hike while listening to Spotify, for example.

The one obvious feature it misses is NFC. This is a sign the Riva S is really designed for iOS devices. 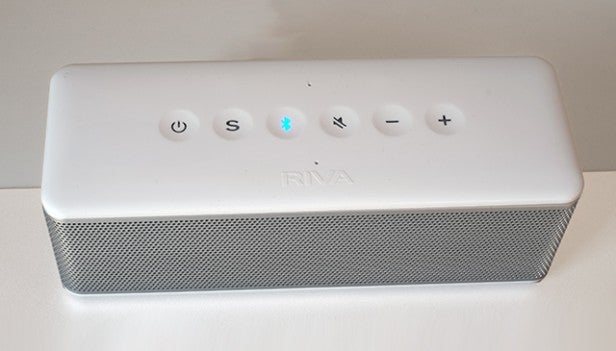 It is in the sound department where the Riva S really starts to gain ground over the many capable, cheaper speakers in this class. At £199, it’s more expensive than the Beats Pill and the Bose SoundLink Mini II.

However, its audio is really in a different class – which, it seems, is down to a far more aggressive approach to using drivers. The SoundLink Mini II has two active drivers and two passive ones, used to amplify bass. In a slightly larger frame, the Riva S crams in three 1.5-inch active drivers and four passive radiators. It’s a wonder there’s even room for the 30W amp circuitry.

Sound pours out of every side of the Riva S. 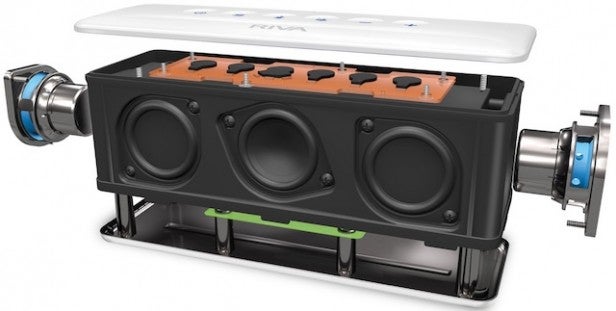 This unusual wealth of drivers helps to explain the cost of the Riva S over some of its rivals – but it has a real effect on sound quality. The Riva S is a small Bluetooth speaker with the authority and high-volume composure of a mid-sized speaker that would be too big to fit into your holiday suitcase.

The Riva S sound is remarkably natural and well balanced, with better treble and mid-range detail than the Bose SoundLink Mini II. While the Bose is a very impressive little speaker, its impact comes in part from clever DSP – and side-by-side, the Riva makes its rendition of vocals sound processed.

This is probably the best all-round sound I’ve heard from a speaker of this size. While the £300 KEF Muo offers greater mid-range and more obvious treble detail, this little box balances its bass better and has a much easier-to-enjoy tone.

Even an incredibly well-engineered and tuned speaker such as this is going to have its limits, though.

The 1.5-inch drivers can deliver too much mid-range texture, which can leave vocals without the separation or as much of the “soundstage spotlight” they should have. The Bose SoundLink Mini II gets around this by massively promoting the frequencies in the central channel where vocals sit. Vocals are always a clear and leading influence through the Bose, but the Riva S gets you a more complete and detailed view of arrangements as a whole.

Then there’s the Trilium surround feature. This is what the “S” button on the top toggles. That you even get the choice to turn it off is a sign the Riva S has been designed by a sound snob. This isn’t one of those horrible sound modes that makes the audio sound like it has been fed through a phaser. It’s subtle, making the sound spread a little wider and making the central channel appear less restrained. 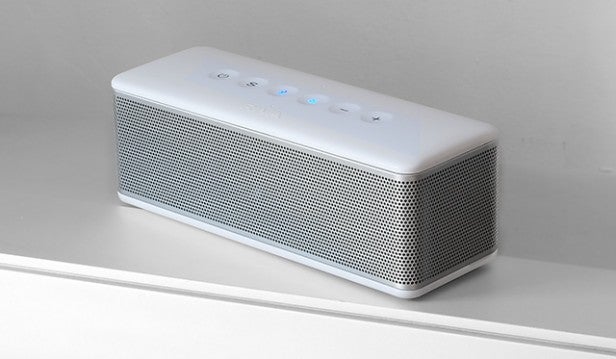 So, what music is the Riva S best-suited to? It works well with everything, as any well-tuned speaker should.

However, I’ve found it really excels with electronic music, where the slight mid-range weakness when the sound becomes busy doesn’t become an issue, particularly if there’s no vocal track at all. The Riva S can sound like a speaker 2-3 times its size, and a good one at that.

Bass depth and power is decent, with a classier, more reserved style than the Bose and Beats options around this price. Both of those are bassier. It doesn’t “show off” what its passive radiators are capable of and as a result sound bass-skewed.

One final criticism of the Riva S is that, for its size, it doesn’t go loud enough. I tend to prefer a speaker that goes significantly louder than I need it to go day-to-day. I’ve been using the Riva S at max volume without feeling like anyone’s going to bang on the wall – this is at home, mind you, not in the office. If you use it in your office, people will bang on the walls, for sure.

Should you buy the Riva S?

In my opinion, your experience with the Riva S is likely to mirror mine: you may view this speaker as “nothing special” initially, but the more you listen to it, the more you’ll come to realise that it’s rather special.

Yes, the Riva S is more expensive than the competition, but this is only because it packs in a greater number of drivers than any of its obvious rivals. Seven standard-sized drivers in a box of this size – that’s quite an achievement.

It also sounds better than every other sub-£200 speaker in this class that I’ve tried. If you want to spend big and don’t mind the quirky elements of its look, it’s a great buy.

If you’re after a casual speaker, however, then the £50 cheaper Bose SoundLink Mini 2 and my favourite bargain pick £60 Jam Heavy Metal are still worth considering.

A great-sounding Bluetooth speaker that sets a new standard at this size.