The Jam Heavy Metal HX-P920 is a small Bluetooth speaker, a little like the Bose SoundLink Mini II but without any brand clout behind it.

However, this is one of the few small-brand portable speakers you’ll still find on the high street, rather than simply on Amazon – and with good reason. The sound and build quality it offers for its £59 price is jaw-dropping. 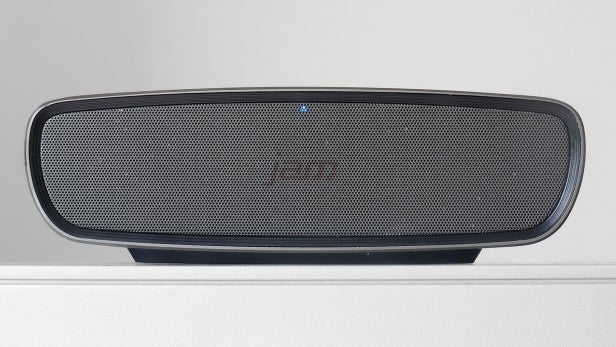 The Jam Heavy Metal HX-P920 is about as small as Bluetooth speakers can get while continuing to pack in the drivers needed to produce decent bass. It won’t fit in your pocket, probably not your coat pocket either, but it will easily manage cabin baggage in order to accompany you on your travels.

At £59 you might expect the Jam Heavy Metal HX-P920 to be a fairly prosaic plastic box, but as the name suggests, it isn’t; almost the entire outer of the speaker is aluminium.

The one-piece curved frame, the front and rear grilles, the buttons on top – all are metallic. Consequently, the Jam Heavy Metal weighs 600g, which is a reasonably significant amount. 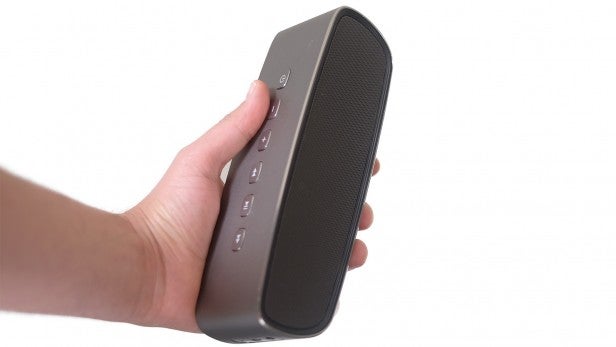 What may be apparent from the photos you see here is that I’ve put the Jam Heavy Metal HX-P920 through the wringer a little. It has been used in several countries, earned a graze to its anodised finish and the speaker grilles are lightly peppered with muck thanks to an unfortunate incident with a suitcase.

The design of the speaker is predictably simple, but looks unusually decent for a small-brand product. Its useful top buttons have consistent icon-style labels and the Jam logo on the front grille is visible only from certain angles. 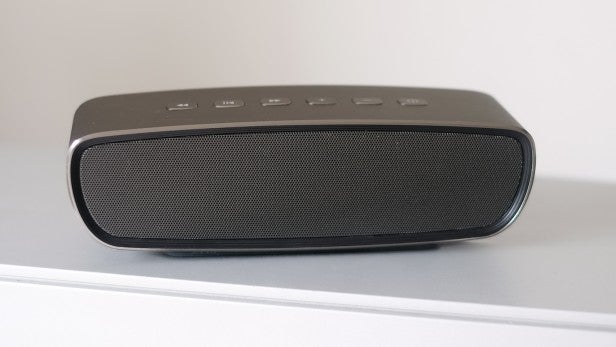 To keep the price down, Jam has left out aptX and NFC. The first offers higher-quality Bluetooth streaming, the second a quick way to hook up with a phone by simply holding the two devices together. Neither is necessarily a huge loss, since the most important consideration in a speaker such as this is getting the sound fundamentals right.

You charge the Jam Heavy Metal HX-P920 using a micro-USB socket on the side, which sits on one of the few plastic parts of the speaker, alongside the 3.5mm aux input, which enable you to connect non-wireless sources. There’s also a tiny recessed button here you can press (with a paperclip) to change languages.

The only other extra feature is a microphone, letting you take calls. However, we wouldn’t advise using this as a conference call speaker as the mic is of low quality. Test recordings I made have a significant noise bed and voice clarity is poor compared to most phone mics. 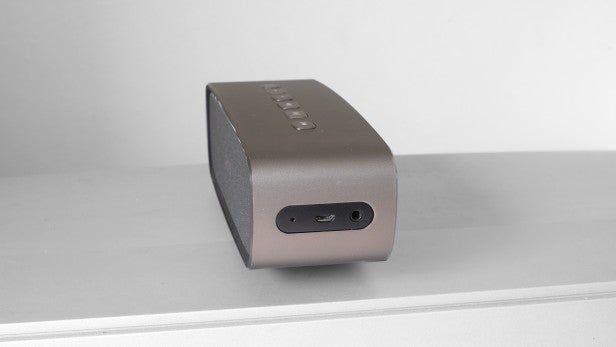 The Jam Heavy Metal HX-P920 has what is really the best driver setup for a small Bluetooth speaker: two small active drivers and a pair of matched passive radiators.

It’s only the two little drivers that are driven in the way of normal speakers. The passive radiators instead respond to the air movement created by the dinky drivers, amplifying the bass. 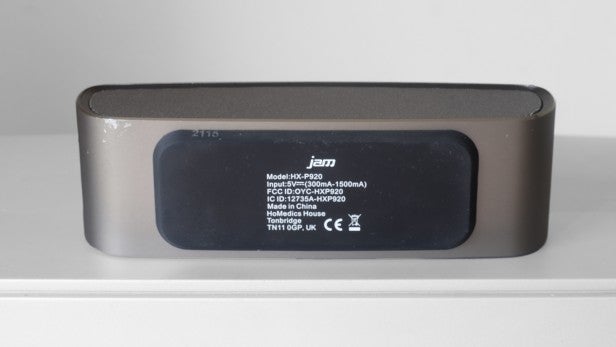 It may sound like cheating, but the results can be truly fantastic. The triumph of the Jam Heavy Metal HX-P920 is that it sounds just as good as Bluetooth speakers costing well over £100.

You get surprisingly decent bass, superb volume and next-level sound quality akin to that produced by the Bose SoundLink Mini II – but for a fraction of the price. Not every aspect of the sound is able to match the top dogs, but to date this is the best small Bluetooth speaker for less than £60 I’ve heard.

The Jam Heavy Metal HX-P920’s defining sound characteristic among its size-class peers is super-clear treble. Lots of small speakers – such as the Sonos Play:1 and Bose SoundLink Mini II, for example – play fairly safe with soft treble, which achieves an accessible, smooth sound. 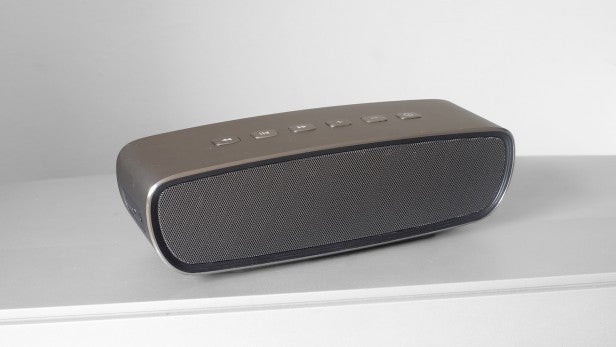 Jam’s tone is sharper, but the clarity is good, not grating. Well-defined high-end frequencies also give the Jam Heavy Metal a surprisingly grown-up sound as the bass, while deep, is well balanced.

Although this speaker’s sound is less grand and a little more delicate than the Bose SoundLink Mini, it’s loud.

If your budget is well under £100, the Jam Heavy Metal HX-P920 is incredibly easy to recommend.

There are some sound improvements to be had if your budget will stretch a little further, however. The Jam Heavy Metal has quite a “scooped” sound, where a lot of the body and detail of the sound comes from the bass and treble, not the mid-range. 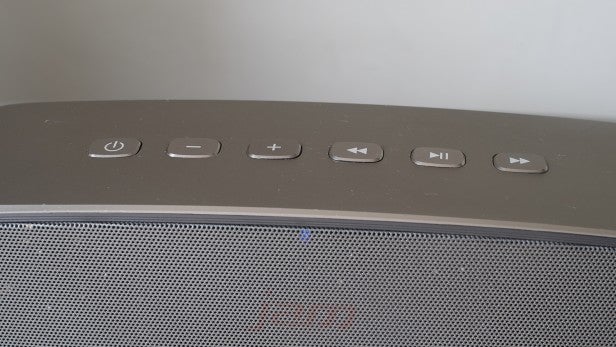 Listen to a spoken-word podcast, for example, and voices can tend to sound like a bed of bass, onto which some treble and upper-mid frequencies have been sprinkled. There’s a mid-range presence, but there are holes in it.

This effect is evident in many fairly expensive “street” headphones, although in Bluetooth speaker land, both the Bose SoundLink Mini II and Riva S in particular offer stronger mids, which result in slightly more real-sounding vocals.

The Jam Heavy Metal HX-P920 also doesn’t have ultra-wide sound dispersal. It’s pretty good at filling small and mid-size rooms simply because it’s loud and powerful, but with only front-firing active drivers and (seemingly) no intense ear-tricking digital sound processing, you can generally pinpoint where the speaker sits just by listening. 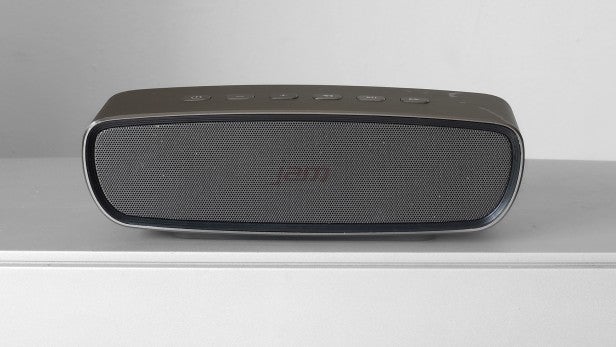 Should I buy the Jam Heavy Metal HX-P920?

For much of its shelf life, the Jam Heavy Metal HX-P920 has sold at its current £59 price. For the money it represents the best deal out there among small Bluetooth speakers.

Sure, I’ve picked a few holes in the Heavy Metal’s sound, but this is comparing it to speakers that cost at least twice the price and up to those that are well over three times its price.

The Jam Heavy Metal HX-P920 appears to have done for Bluetooth speakers what the Motorola Moto G did for phones; it’s just a pity that more people haven’t taken notice.