The SRS-X99 is Sony’s current range-topping wireless speaker, a step up from the £350 SRS-X88. Like the X88, this top-end model supports high-resolution and multiroom playback, but increases the power, amplifiers and driver count to deliver what I hope is a bigger and more exciting sound.

You can currently find it online for around £600, but even still it’s a relatively pricey option, adding a good £250 premium to the SRS-X88. Luckily, the device justifies its premium price with astounding sound quailty.

The SRS-X99 certainly has the look and feel of a premium speaker. With its piano black glass top panel, chamfered edges and brushed metal side panels, the design exudes sophistication, while the grey aluminium grille on the front hides a busy complement of drivers. You can remove it using a special tool. 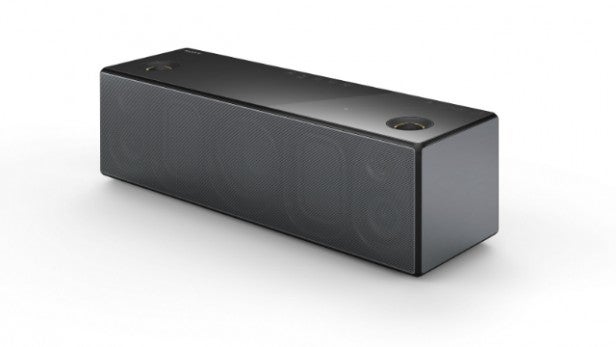 At 430mm wide it commands a fair slab of surface space and it’s too bulky to be considered portable, but the tidy, straight-lined shape should make it easy to place among your picture frames. Build quality is superb, boasting the weighty bodywork and classy finish I’d expect at this price.

Take a closer look at the top panel and you’ll spot illuminated touch-sensitive volume and standby buttons towards the back, plus a row of input selection keys that magically appears when your hand approaches – further justification for that price tag. These top controls make it nice and easy to switch inputs and tweak the volume.

Even more interesting is the presence of two upward-firing super tweeters, the gold ring around them denoting hi-res compatibility. An NFC logo in the middle tells you where you need to tap your Android device for Bluetooth streaming.

Being a wireless speaker, the rear panel isn’t exactly packed with sockets. However, there are USB-A and USB-B ports, the former allowing you to play music from flash drives while the latter turns the Sony into a USB DAC for your laptop, enabling lossless audio playback.

There’s a 3.5mm minijack input for portable devices an Ethernet port, which provides a wired alternative to the dual-band Wi-Fi connection. A Wi-Fi antenna on the back helps improve wireless reception but can be stowed away when not in use.

The SRS-X99 can be used in a multiroom system with other speakers from Sony’s line-up. To do that, you’ll need to download Sony’s SongPal app onto your smartphone or tablet (iOS or Android) where you can play the same song through several speakers or stream different sources to each one.

Those sources include PCs and NAS drives on your DLNA network, Spotify, Google Play Music, TuneIn Radio or songs stored on your phone. It’s an impressive line-up, although services like TIDAL or Deezer would have been nice. 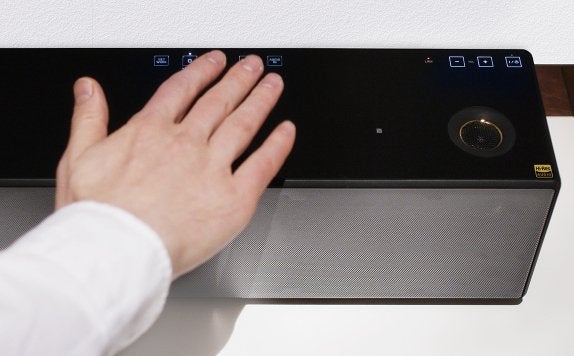 You can also stream music via Google Cast, AirPlay and Bluetooth. For the latter, Sony’s LDAC codec offers high-quality streaming from compatible devices, using three times the data of regular Bluetooth. Throw in the afore-mentioned USB socketry and you’ve got one well-connected speaker.

The SRS-X99 is equipped with seven speakers, each with its own dedicated amp. On the front are two 19mm super tweeters, two 50mm Magnetic Fluid midrange drivers, a 94mm subwoofer and two passive radiators that boost low frequency performance by allowing more air to flow through the cabinet. On top, two more 19mm super tweeters attempt to create a spacious soundfield.

Also on board are two other Sony technologies: ClearAudio+, which automatically optimises the sound, and DSEE HX, which ‘upscales’ compressed music by artificially restoring lost data. Talking of which, the Sony supports lossy MP3, WMA and AAC, plus lossless FLAC, ALAC, AIFF, WAV and DSD playback.

The first thing you need to do is download the SongPal app and follow the onscreen instructions. You have to connect your phone via Bluetooth and your Wi-Fi settings are transmitted to the speaker. The appearance of the app’s home screen with your speaker’s name at the top confirms a successful connection. 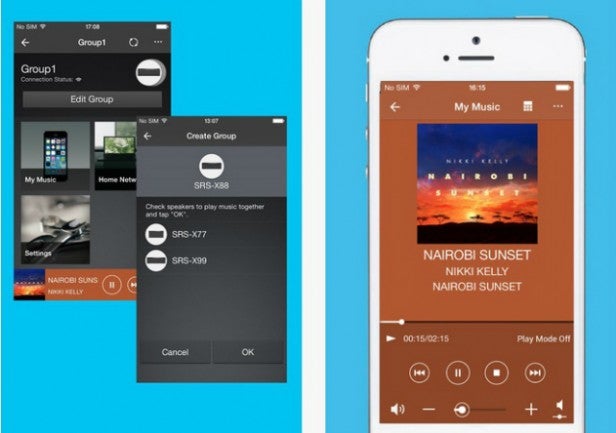 The app itself is stylish and practical, keeping things simple as you explore your music libraries. The main screen displays each input with a funky full colour graphic, making it easy to find what you want.

The ‘Create Group’ option at the top lets you team up combinations of speakers for multiroom playback. Sony’s foolproof interface makes this a breeze – just drag and drop speakers onto each other.

Delve into the Home Network option and you’ll see a list of your PCs and NAS drives. The subsequent menus organise your albums and tracks into simple, no-nonsense lists, with small cover thumbnails on the left.

Impressively, the app loads and scrolls through huge libraries quickly. There’s also a cool Voice Command function that searches for songs titles on music services and your phone, but it doesn’t work with DLNA servers.

Play a track and the app switches to the Now Playing screen, with playback and volume controls at the bottom and cover art at the top. You can skip through a track using a handy slider or select repeat and shuffle play modes from a drop-down menu.

Unlike the Bose SoundTouch app, Spotify isn’t incorporated into SongPal – instead it diverts you to the dedicated Spotify app.

The Sony also comes with a slim, ergonomic remote. Buttonry is stripped to the minimum, with prominent volume keys and buttons for each input. It’s a really useful tool when your phone’s out of action.

I have to admit to being slightly disappointed by the SRS-X88’s safe, uninvolving presentation, but the SRS-X99 puts things right with a bigger, ballsier approach.

The additional super tweeters on top add a smidgeon of extra crispness and space in the high frequencies, while the Magnetic Fluid midrange drivers do a better job at conveying dynamics, raising excitement levels when playing high-tempo tunes.

As you might expect from a speaker equipped with four tweeters, detail reproduction is clear and fluid, but thankfully it’s not over-emphasised. The SRS-X99 teases out the gentle background percussion in Ryo Kawasaki’s Trinkets and Things and reveals the nuances in Adele’s voice as she belts out When We Were Young.

It gets even better when you feed the Sony a hi-res track. Barcelona Nights by David Benoit glistens with detail, from the glassy piano notes to the airy ride cymbal and twanging Spanish guitar. The song is elegantly staged, tethering Jane Monheit’s voice to the centre while the piano, guitar and percussion dance around it.

Sony’s decision to fit twin radiators pays dividends as the SRS-X99 moves some serious air. House kick drums thud through the room with excellent timing and tightness, and there’s very little flab to slow them down. Basslines are weighty and cohesive.

It also offers a clear, attacking midrange and a spacious soundstage. The SRS-X99’s top tweeters can’t deliver omnidirectional sound like the Samsung R7 or Geneva AeroSphere – there’s a definite drop-off in quality when you move outside the sweet spot – but it certainly doesn’t struggle to fill the room and projects music with pleasing height and width.

It’s still not the last word in sound quality, with speakers like the B&W Zeppelin Wireless and (admittedly pricier) Naim Mu-So taking things to the next level, but against big-name competition like Samsung, Denon, LG and Yamaha it’s certainly one of the better performers. 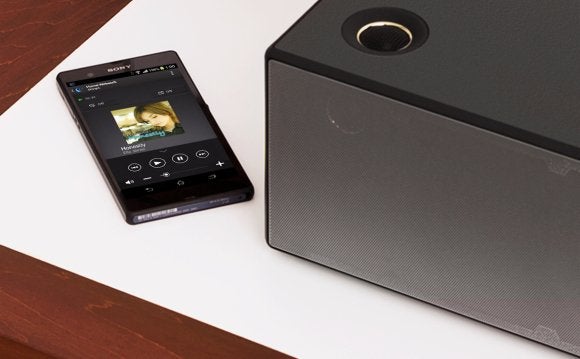 Should I buy the Sony SRS-X99?

With its comprehensive feature list, stunning looks and impressive sound quality, the SRS-X99 deserves a place on your want list, easily justifying the hefty premium over the SRS-X88.

Features like Google Cast, Spotify Connect, AirPlay, DLNA and Bluetooth put a wealth of music at your disposal. It’s easy to orchestrate a multiroom system using the slick SongPal app, which could only be improved by adding more music services.

But sound quality is the real star here – the Sony’s lucid detail, weighty bass and improved attack put its cheaper sibling to shame, bringing the best out of your regular and hi-res music collection.

The SRS-X99 earns its place among the multiroom speaker elite with its wealth of features, luxurious design and polished performance, which sees a step-up in power and excitement over the SRS-X88