What is the Naim Audio Mu-So?

Not surprisingly, it’s an opulent affair that’s designed to add a bit of audiophile panache to music streamed via uPnP, AirPlay, Spotify Connect or Bluetooth. But at £895, it’ll make a fairly hefty dent in your bank balance.

With its idiosyncratic styling and luxurious build quality, Mu-So is less a speaker and more a work of modern art. The remarkably heavy wooden cabinet is clad in a layer of anodised aluminium with an elegant brushed finish, which contrasts beautifully with the wavy black grille on the front. If black isn’t your thing then Naim sells a range of grilles in various colours, including Deep Blue, Vibrant Red and Burnt Orange.

The whole unit sits on a mirrored acrylic base that lights up at one end to highlight the subtle Naim logo. An extruded heatsink on the back isn’t only a cool design feature – it also keeps the unit cool. 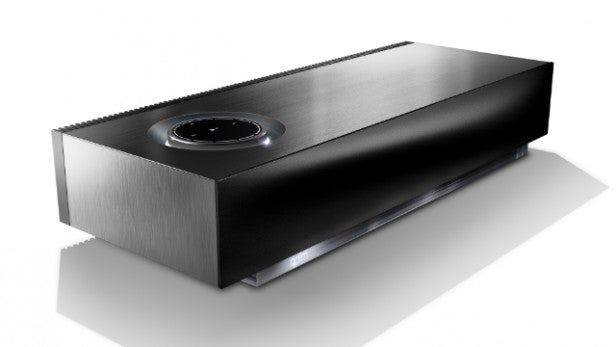 The pièce de résistance, however, is the large volume dial sunk into the top surface, with an illuminated display panel in the middle.

Apparently, it took months to perfect and you can see why. It turns with the sort of smooth action that would make Alan Partridge’s head explode, and as it turns, a ring of light around the edge indicates the volume level. This stunning piece of engineering is indicative of the Mu-So’s premium approach.

The display panel also sports a series of touch-sensitive keys, allowing you to change inputs and control Bluetooth devices. On the side you’ll find a USB port to connect your Apple devices, MP3 players and USB sticks, plus a 3.5mm mini-jack input for everything else. A recess on the rear houses an Ethernet port and optical digital audio input.

Removing the front grille reveals two large racetrack bass drivers, a pair of silk dome tweeters and two custom mid-range drivers, placed on the outside to aid dispersion. The woofers use a bass reflex system, with ports on the underside at both ends of the cabinet.

Each of the six speakers is driven by a 75W digital amplifier, amounting to a total power output of 450W. That power is policed by a 32-bit digital signal processor, running software fine-tuned by Naim engineers.

There’s even native support for lossless streaming service Tidal, which was added with a firmware update in October. The update also adds a few other features, such as an alarm clock, gapless playback and support for 32-bit audio files.

You can also play music from USB devices, or hook up your TV to the optical digital input and spice up programmes and movies.

Multiroom is a major part of the Mu-So’s appeal. Using the Naim app, you can send music to multiple Naim wireless speakers around the house.

In terms of audio formats, Mu-So leaves no stone unturned. It’s primed to play hi-res music with support for WAV, FLAC and AIFF up to 192kHz and ALAC up to 96kHz, although it’s limited to 48kHz over a wireless network. Naturally, it also plays lossy formats such as MP3, AAC, WMA and OGG.

It isn’t compulsory, but to make the most of Mu-So you’ll need a smartphone running Naim’s free app. Not only does this allow you to control the system and switch sources, but it also acts as the control hub for a Naim multiroom system.

The app makes the setup process simple. Fire it up, tap the “setup new Mu-So” option and it runs you through the process step by step, including Wi-Fi setup. Alternatively, owners of iOS devices can connect it to the USB port and share Wi-Fi settings with Mu-So.

A thorough settings menu lets you tweak every part of the Mu-So’s performance, down to the brightness of the front lighting and room position. 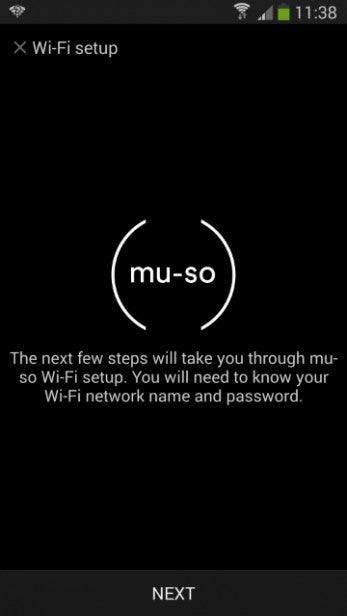 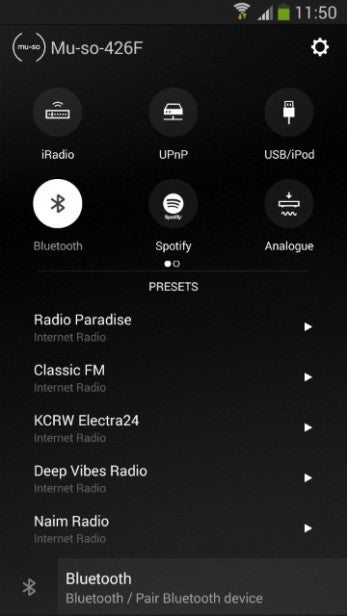 Naim has done a fine job with the app’s simple, streamlined design. The Home menu’s white icons on a black background are clear and logical, but if your tastes are more exuberant, you can choose from a range of jazzier backgrounds in the Settings menu.

Available sources displayed at the top, including Spotify and UPnP, while the lower half of the screen houses stored internet radio presets. A banner at the bottom of screen shows what’s currently playing. Tap the box and it expands to full screen, displaying available cover art, metadata and format details.

Using the Mu-So app is a generally hassle-free experience. It didn’t have any problems finding our Mu-So on the system and the slick, uncomplicated menu structure allowed me to navigate intuitively from the word outset.

There were no Wi-Fi drop-outs or major glitches either, but if I’m being mega critical it was occasionally slow to respond when skipping tracks during Spotify playback.

Naim has also included a physical handset to control the Mu-So. It’s pleasant to use but build quality isn’t up to the same standard as the speaker itself – it’s light, plasticky and worryingly easy to bend.

Although neatly arranged, the buttons have a rather flimsy feel, particularly the central cluster of input, volume and Bluetooth controls.

Feed some music into Mu-So and it delivers a phenomenal performance, possibly the best I’ve heard from a wireless speaker.

The first thing I noticed was how powerful it is, requiring only a gentle turn of that gorgeous volume dial to fill the room with a huge wave of sound.

I felt dwarfed by its sheer scale. It thrashes out drum beats and rousing movie scores with a sense of dynamism and muscularity that belies its demure exterior, but controls them with poise and precision.

The synth bassline from “Spiritual Eyes” by Jarrod Lawson is rich and rhythmic; the start and stop points of each note accurately observed. There’s remarkable agility and clarity in the low frequencies, which not only propels the music forward but also brings a warming sense of depth and solidity. 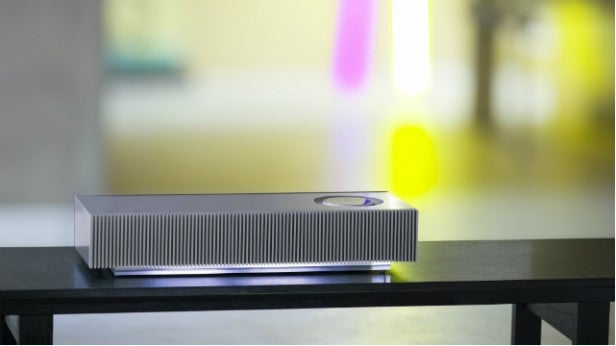 If you like your basslines lean and subtle then this is not the system for you. Mu-So belts out bass like it’s going out of fashion, resulting in a thick, full-bodied sound. I love it.

Cohesion is another of the Naim’s key qualities. Mu-So’s sound is a singular entity, with seamless integration from bass to treble. No single frequency takes centre-stage – this is as natural a sound as you could hope for from a wireless speaker.

Mu-So’s detail reproduction is superb – not only in the obvious areas such as hi-hats and percussion, but also in vocals and instruments. Both are imbued with life-like nuance and texture. High frequencies sound crisp and incisive, but never hard – even when you turn up the volume.

You can really hear the Mu-So’s audiophile credentials when you step up to high-resolution music. Played from a USB HDD, Daft Punk’s “Give Life Back To Music” (88.2kHz/24-bit) is a real gem, fizzing with top-end detail and a deep, bouncing bassline.

Mu-So also creates a wide, spacious stereo soundstage that gives each instrument room to breathe. This immersive, engaging sound gets closer to a true hi-fi experience than most wireless speakers on the market. 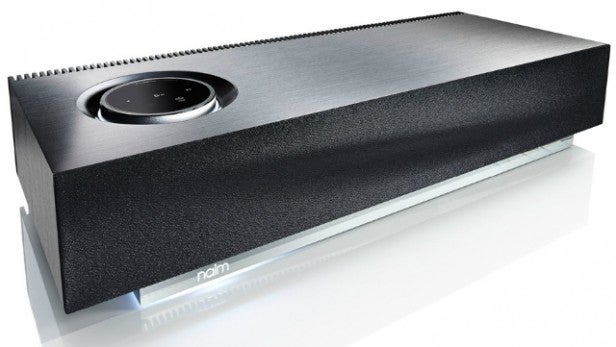 Should I buy the Naim Audio Mu-So?

With its jaw-dropping design, extensive features and killer sound quality, Mu-So is one of the best wireless speakers money can buy. It’s expensive compared with most wireless speakers, but its stunning design and performance easily justify the hefty price tag.

Design-wise, it’s one of a kind – highly distinctive and beautifully crafted from premium materials. It’s also easy to use thanks to Naim’s no-nonsense smartphone app, which allows you to stream from a wide range of wireless sources and effortlessly orchestrate a multiroom system.