Sony’s SRS-X88 is a wireless speaker from the same family of multiroom audio products as the impressive HT-XT3 soundbase. It’s one of three Wi-Fi/Bluetooth speakers in Sony’s latest range, sitting below the top-end SRS-X99 (£599) but above the portable SRS-X77 (£259).

It’s stylish, packed with features and puts an abundance of music at your fingertips. However, with an asking price of £350, the SRS-X88 has to justify it with a top-drawer performance.

The SRS-X88 is one classy-looking speaker. Sony calls its design “Definitive Outline” thanks to a thick black trim that runs along the edges of the speaker. This “accentuated perimeter” frames the speaker’s side panels beautifully, giving the whole thing a distinctive, timeless appearance.

The top panel is made of glass, with brushed steel on the sides and plastic on the back. The grey metal grille on the front can be removed if you want – I think it looks better attached.
The simple brick shape is compact and easy to place, while the unit’s heft implies luxury. This is enhanced further by eight touch-sensitive buttons on top, which control input selection, volume and Bluetooth pairing.

Tiny lights indicate which input is selected, while another on the front lights up when it receives remote commands. You can pair an Android device using the NFC touch point on top.

Four short feet with rubber pads provide a sturdy base. On the back is a smattering of sockets, including two USB ports (one type A, one type B), a 3.5mm mini-jack input and an Ethernet port for those who prefer a wired internet connection to the dual-band Wi-Fi (a fold-down antenna for which is also found on the back).

Alternatively, you can stream music via Bluetooth. Sony’s LDAC codec transmits music with three times the data of regular Bluetooth, which means you can enjoy music at a higher quality if your device supports it.

DLNA streaming and multiroom control are carried out through Sony’s SongPal smartphone app. If you have two or more Sony multiroom speakers in your house, you can use SongPal Link to send different sources to each speaker, or group them together and play the same music through them all. Perfect for parties.

As the little badge on top suggests, the SRS-X88 is equipped to handle hi-res audio files including FLAC, ALAC, WAV, AIFF (up to 192kHz/24-bit) and DSD.

Like the HT-XT3, the SRS-X88 is stuffed with Sony sound tech. First up is DSEE HX, which aims to boost the quality of MP3, WMA and AAC files by restoring the data lost in the compression process. It’s joined by ClearAudio , which automatically optimises sound quality, while Sony’s S-Master HX digital amplifier technology keeps distortion from the door.

You can connect the SRS-X88 to your Wi-Fi router via WPS or by connecting a LAN cable and going through your web browser, but the simplest way is to use the SongPal smartphone app. Once downloaded, simply pair your phone with the Sony and follow the onscreen instructions to enter your Wi-Fi password. 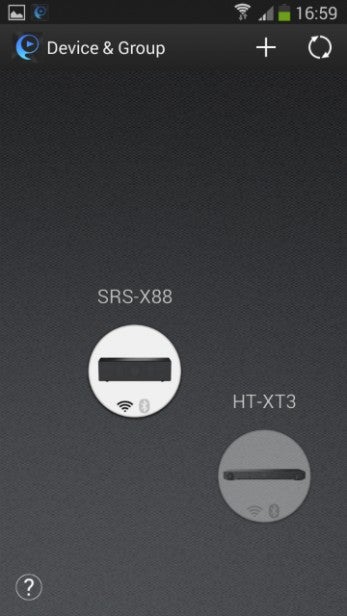 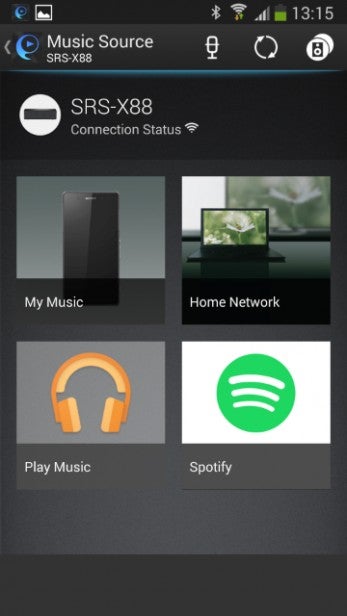 Once connected, the SRS-X88 appears on the “Device & Group” screen. Here, each connected Sony speaker is represented by a bubble that you can drag around with your finger; to group them together, just drop one device onto another. The app saves the group and lets you name it. New devices can be added to the system by tapping the ” ” at the top of the screen.

Select a device and the subsequent menu displays all available sources. They’re arranged into a grid of tiles with jazzy, full-colour graphics. Hit Spotify or Google Play Music and you’re whisked off to the respective apps, while the My Music and Home Network icons let you explore tracks on a phone and DLNA device respectively. 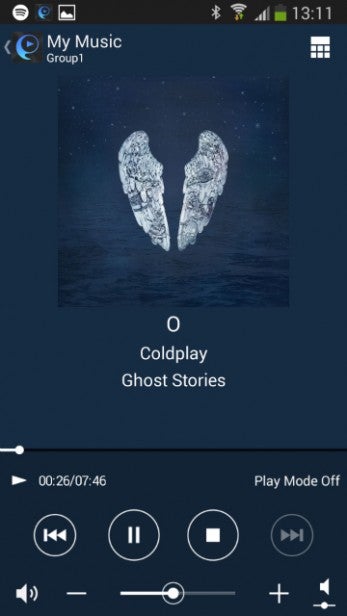 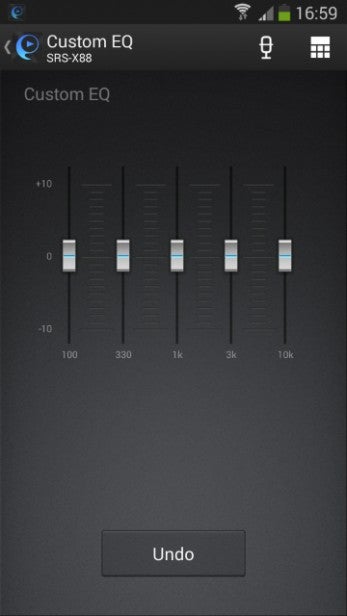 The app isn’t particularly innovative but crucially it’s slick, attractive and easy to follow. Multiroom operation is a breeze and I didn’t experience any drop-outs or annoying delays during the test – everything just worked.

The equaliser section lets you select an EQ preset or use the Custom mode to manually adjust the frequency bands with the virtual sliders. After extensive twiddling, I found the Flat or ClearAudio settings to be the most satisfying.

The SRS-X88 also comes with a physical remote for simple day-to-day operation. It’s a slim wand with small rubber buttons. Slightly larger volume keys are prominently placed in the middle, with input buttons at the top and Bluetooth transport controls at the bottom. It’s basic but very practical – I found myself using it more than the phone app.

The SRS-X88 is undoubtedly a talented performer, going louder than its modest dimensions would suggest and handling music with a sense of refinement. It doesn’t quite excite and engage in the way a £350 speaker should, but on the whole it’s an enjoyable listen.

There’s plenty to admire, not least its punchy bass output. Kick drums and electronic basslines are delivered with pleasing heft, while the slap bass in Jamiroquai’s “Bullet” is tight and funky. Music has more depth and body than I expected from a speaker of this stature.

Not surprisingly for a system boasting two super tweeters, there’s plenty of detail in the mix, making the sound clear and open. It could do with a little more attack to lift the energy levels, however – the sound errs on the safe side. I tried fiddling with the EQ settings to coax out a little more vigour, but to no avail.

That does mean, however, that you can turn it up reasonably loud without any high-frequency harshness creeping in. Percussion and hi-hats are handled with a light, silky touch and snare drums have an incisive leading edge. 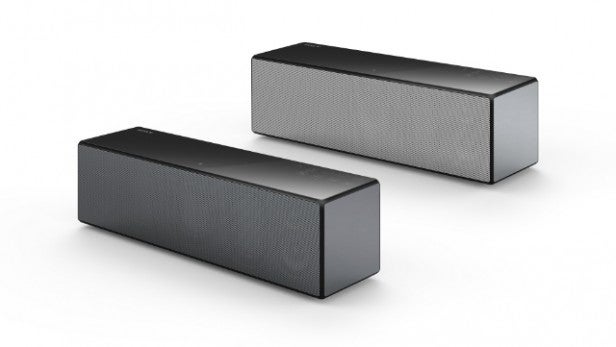 There’s good definition in the mid-range, with vocals and instruments sounding clear and full-bodied. Daft Punk’s vocoder vocals are rich and prominent, with a sharp electronic buzz. Step up to hi-res files – streamed from my Android phone via SongPal – and the expanded dynamic range makes songs more involving than Bluetooth.

However, compared with wireless speakers such as the Crystal Acoustics Cuby 9 or the Samsung R7, the Sony offers a rather limited listening area. Walk around the room while it’s playing and you lose treble clarity as you move away from the sweet spot.

The narrow soundstage means you need to sit directly in front to experience the best stereo image. That might be okay for an old-school hi-fi setup, but it isn’t for a system designed to play music while you do other stuff. 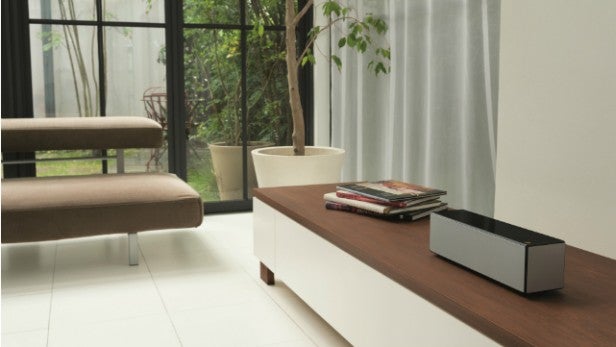 Should I buy the Sony SRS-X88?

With its abundant features, timeless design and slick operation, the SRS-X88 is an impressive wireless speaker, but for £350 its sound quality doesn’t quite hit the heights I was expecting.

Music sounds weighty and detailed with lovely midrange reproduction, but the narrow soundstage means you only get the best results when you’re in sitting front of the unit.

Rival speakers such as the Samsung R7 and Crystal Acoustics Cuby 9 deliver omnidirectional sound that remains the same as you walk around the room. But even when you’re sitting in the sweet spot, the SRS-X88 is a little uninvolving – a touch more attack wouldn’t go amiss.

But no-one can argue with the Sony’s pedigree in other areas. In terms of wireless support it leaves no stone unturned, allowing you to stream from AirPlay, Bluetooth, Google Cast, Spotify and DLNA, while the slick SongPal app makes it easy to orchestrate your multiroom system.

It may not match the performance, features and value of Sony’s HT-XT3 soundbase, but it’s still worth an audition.

Sony’s SRS-X88 is an elegant, easy-to-use wireless speaker with a wealth of features, let down by a narrow soundstage and a slight lack of sonic excitement.