What is the Geneva AeroSphère Large?

AeroSphère Large is a
wireless multiroom music system blessed with a striking spherical
design. This is a speaker designed to make a splash, eschewing the
angles and straight lines of most wireless systems for something
altogether more daring.

But it certainly isn’t a case of style
over substance. The Swiss brand has packed its audio orb full of
high-end components and processing, all primed to deliver hi-fi stereo
sound. Alongside Wi-Fi, Bluetooth, AirPlay, DLNA and Spotify Connect
ensure all your wireless sources are catered for.

The swanky styling and extensive features are reflected in the hefty price, but if it sounds half as good as Geneva’s Model Cinema soundbase it’s sure to be money well spent. 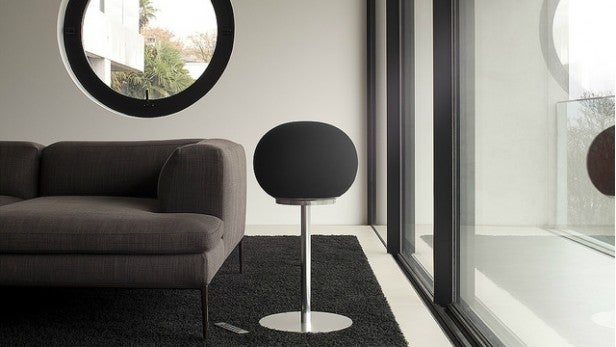 AeroSphère’s
bold design is as likely to appeal to interior decorators as music
lovers, looking more like an ornament than a speaker. Measuring 405mm
wide, the polymer dome is finished in a choice of red, black or white
fabric that feels similar to snooker table baize. 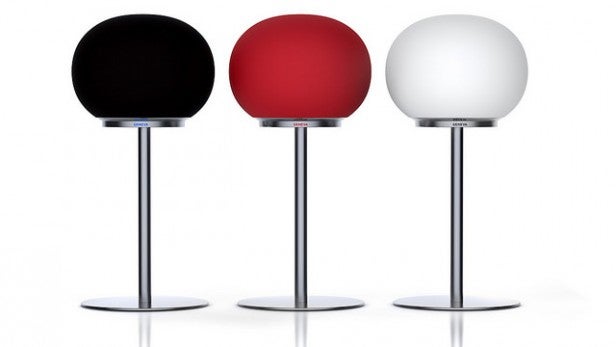 The
speaker sits on a steel base with a Geneva logo on the front that glows
different colours to denote the unit’s status: green for AirPlay/DLNA;
blue for Bluetooth; and pink for line input. Around the rear of the base
are two buttons, power and setup, plus a 3.5mm mini-jack input. 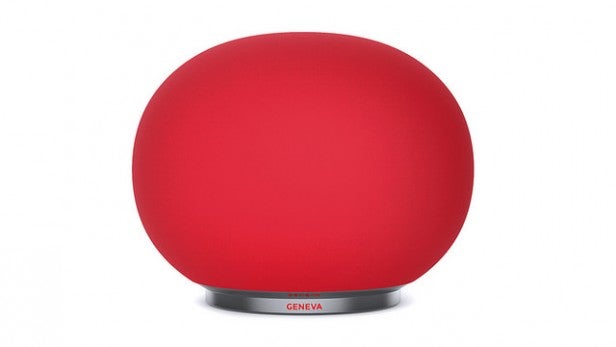 The
fabric and steel combo is stunning, but it reaches jaw-drop status when
placed on the optional floorstand (£149). Fashioned from brushed
aluminium, it features a large round base with a central pole that slots
into a hole on the bottom of the AeroSphère (which also houses the
power input). It raises the unit to 788mm high and hides the power cord,
ensuring a clean, minimal appearance.

If you don’t opt for the
stand then there are four small rubber feet in the box for tabletop
placement. If it’s too large for your desired location then the
AeroSphère Small might be more suitable.

The
AeroSphère Large boasts a full house of wireless connectivity,
including Apple AirPlay, DLNA, Spotify Connect and Bluetooth apt-X. You
can access Spotify, TuneIn radio, Wimp and Deezer directly through the
AeroSphère smartphone app (which I’ll come to in Operation), but to
access music on networked devices you have to download a third-party
DLNA player – Geneva recommends the BubbleUPnP app, which I used for my test. 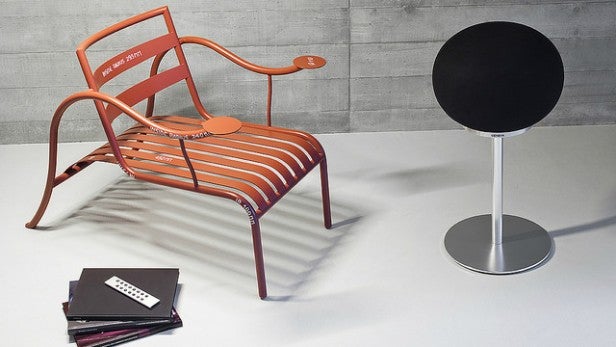 Inside
the domed cabinet are two 4-inch woofers, two 1-inch tweeters and an
up-firing 6-inch subwoofer, arranged within three separate acoustic
chambers. The drivers are individually powered by class-D digital
amplifiers, which have been optimised using proprietary digital signal
processing. The up-firing subwoofer is designed to offer consistent
bass, no matter where you place it. 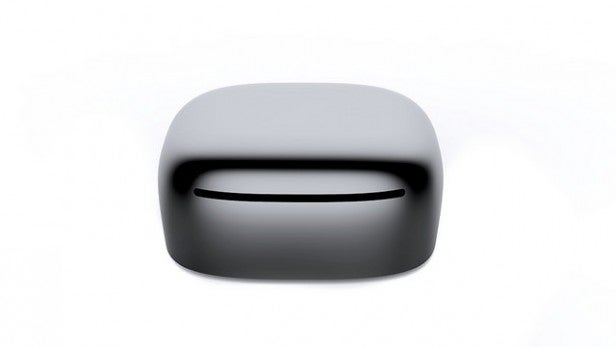 With
Geneva’s optional AeroSphère Base (£449) added to your network, you can
play music on up to four AeroSphère Larges in a multiroom system. Base
features a built-in CD player, FM/DAB/DAB+ radio and another line input,
all of which can be beamed to the AeroSphère via Wi-Fi.

Setting
up the AeroSphère is ostensibly easy – just download the app and follow
the instructions – but my experience was initially beset by small
annoyances. The remote wasn’t working and I couldn’t get the fiddly
battery compartment open. In addition, the app took ages to find my
speaker and kept losing the connection. 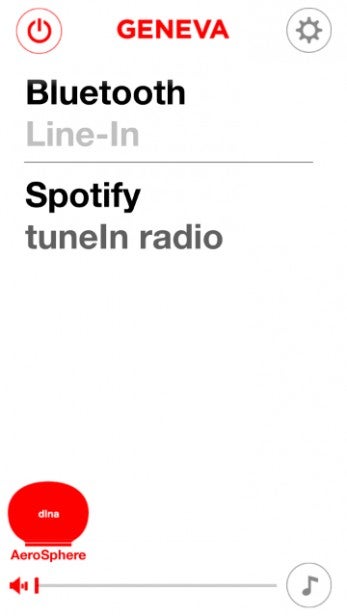 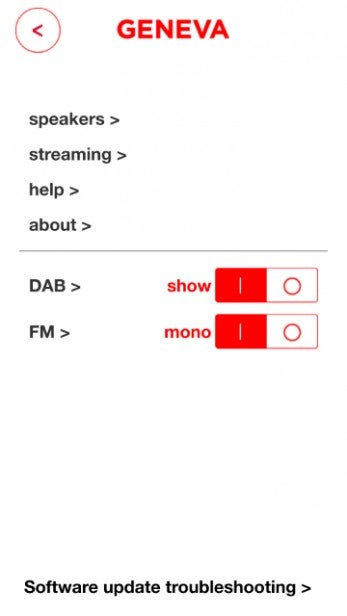 But
when it’s working, operation is easy. Credit for that goes to the
AeroSphère smartphone app and its thoroughly modern but user-friendly
design. The sparse homepage uses large black and red lettering against a
crisp white backdrop, with a volume slider at the bottom and connected
AeroSphères displayed in red. You can select a source from the list at
the top.

You
can adjust the bass and treble levels, while three DSP presets adjust
the audio settings for different positions – freestanding, close to a
wall or in a corner. These settings are well hidden in the setup menu,
but are worth playing around with.

You can also change the
speaker name or update the software by visiting the Geneva’s
browser-based setup page. Two AeroSphères can be used in a stereo pair,
using the app to assign the left and right channels.

The app is
easy to use, but it’s a shame you can’t access DLNA devices directly
from the AeroSphère app – switching between BubbleUPnP and AeroSphère is
a bit of a pain.

The supplied infrared remote is a suitably
stylish affair. Wafer thin and clad in a gorgeous silver finish, it
features an array of large, well-labelled rubber buttons. The AeroSphère
can be controlled with the app, but the physical remote saves you the
hassle of firing it up just to adjust volume or switch sources.

In
action, the AeroSphère Large works well. The Geneva switches
automatically to DLNA or AirPlay sources once you start playing music –
the Geneva logo turns green to confirm. I streamed music from
smartphones and laptops on my network without any major problems, apart
from a few drop-outs when streaming via AirPlay. The Bluetooth
connection is stable and reliable.

The AeroSphère delivers
stunning sound quality. Despite its spherical shape, the Geneva’s
forward-facing drivers don’t emit omnidirectional sound like the Samsung R7, but the up-firing subwoofer ensures that the sound still fills the room. 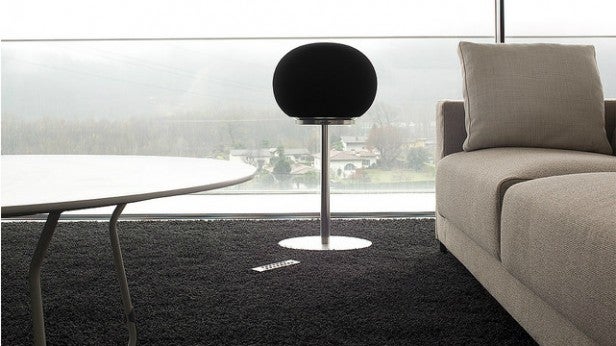 Its
deep, punchy bass notes give every track a solid foundation. Whether
you’re sitting down or walking around the room, the Aerosphère’s
muscular bass notes find a way to rattle your ribcage.

Play the
disco funk of Daft Punk’s “Get Lucky” and its kick drums and bassline
are solid yet agile, while the booming beats of “Unstoppable” by Lianne
La Havas drive hard and fill the room. It’s a virtuoso performance,
exciting and full-bodied. 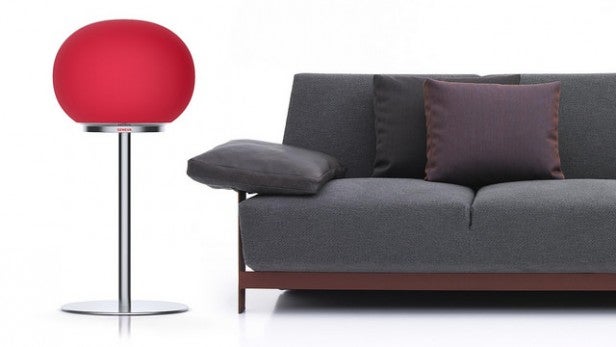 I thought the speaker’s prodigious bass output might overpower its finer
aspects, but this isn’t the case –  hi-hats, strings and guitar plucks
in “Get Lucky” cut through clearly, while Pharrell’s vocals sound clear.
There’s no hardness when you push the volume up high, further evidence
of the AeroSphère’s audiophile credentials.

AeroSphère does a
good job with lower-quality files streamed via Bluetooth, but obviously
hi-res files reveal its true audiophile colours. A 96kHz/24-bit FLAC
file of “Too In Love” by David Benoit and Jane Monheit sounds gorgeous: There’s plenty of detail in Monheit’s voice and a crisp leading edge to
the Latin-flavoured guitar.

If I’m being picky, the
AeroSphère’s soundstage could be better. Rather than creating a wide
audio space in which instruments are given room to breathe, the Geneva
comes at you like a solid wall of sound. It’s certainly cohesive and
detailed, but it lacks the “live performance” feel that audiophiles
seek. 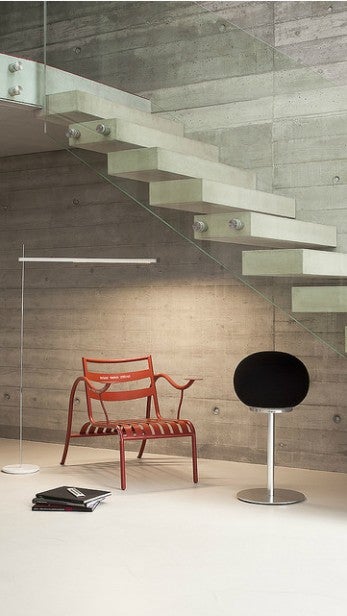 Should I buy the Geneva AeroSphère Large?

If
you’re the sort of buyer for whom boundary-pushing design is as
important as polished sound quality, then the Geneva AeroSphère will be
right up your alley.

Its striking spherical enclosure looks right
at home in contemporary living spaces, and makes jaws drop when placed
on the bespoke floorstand. Looks like this don’t come cheap, but the
AeroSphère more than justifies the expense.

However, it’s the
AeroSphère’s sound quality that really seals the deal – rich in bass,
detail and dynamics, this is a system that makes music sparkle, although
some hi-fi purists might yearn for a wider, more spacious soundstage.