If you don't have the space for a full surround sound system, the HT-G700 is a smart way of bringing Atmos to the home with a smaller footprint. It isn't the surround sound experience Sony suggests it is, but the Vertical Surround Engine works brilliantly in creating height channels without the aid of upfiring speakers

Back in 2014, Atmos was heralded as the future of cinema. In the six years since its arrival, it’s become a technology of the present, available in TVs, game consoles and even smartphones. The definition of Atmos has broadened – knocking holes in the ceiling to create overhead channels is a thing of the past – it’s now about getting higher-quality sound to create a more immersive experience through whatever device you have.

Which serves as a long-winded introduction to Sony’s HT-G700 soundbar. It brings Atmos/DTS:X sound south of £500 but doesn’t use upfiring speakers. Instead it uses a piece of wizardry called the Vertical Surround Engine. As a method of getting object-based audio into the home, it’s quite the innovation.

There’s a slight two-tone aspect to its black finish, with the top surface covered in a matte black texture and the front of the main unit taken up entirely by the speaker grille. 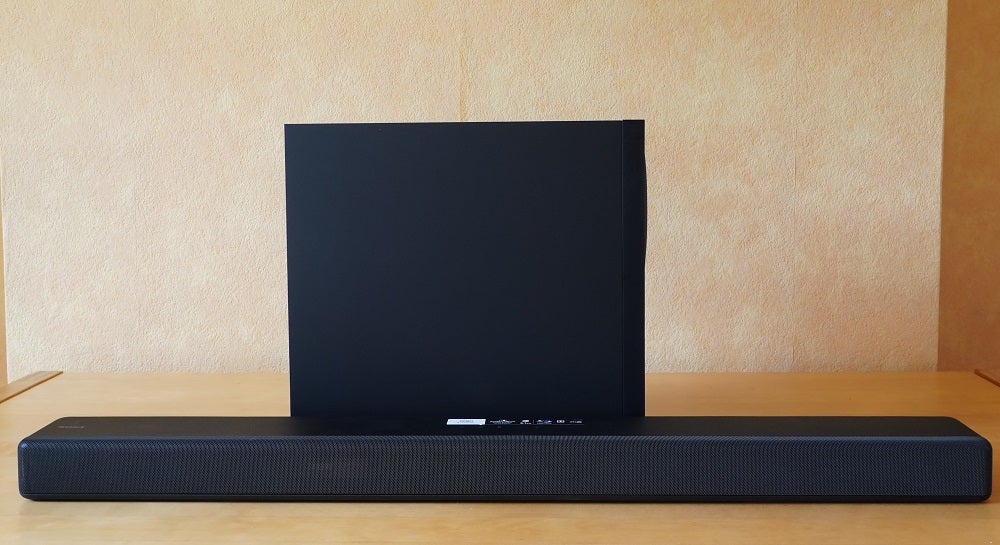 It hews to the appearance of the all-in-one HT-X8500 with its slim aesthetic and rounded curves. It should be able to sit in front of the TV without blocking the IR signal, particularly if your TV comes with a central stand over feet.

Get up close and you can spy the drivers inside, though you won’t notice the front display left of centre. The display is easy to read and supports five characters before scrolling through the rest of the field. The display’s brightness can be dimmed or turned off if it proves a nuisance. 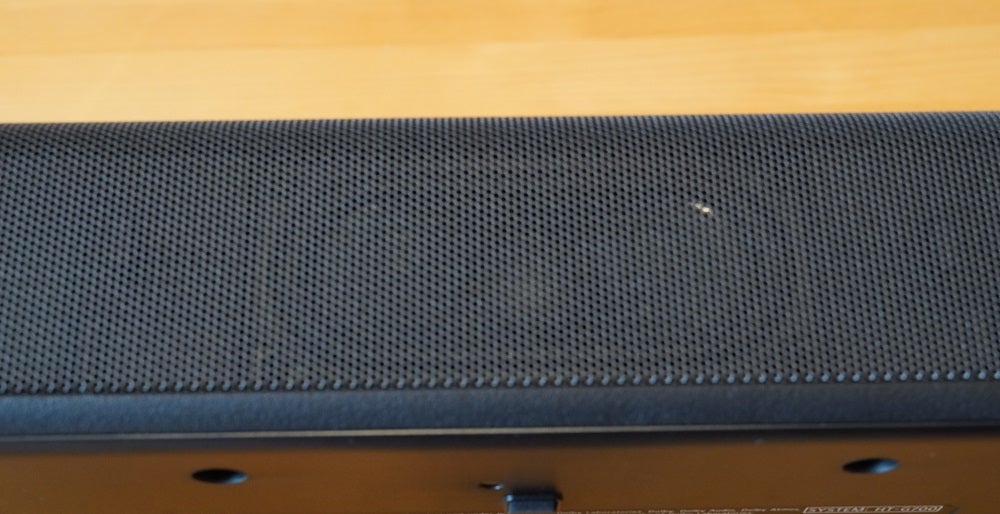 The partnering wireless subwoofer (SA-WG700) also comes in a black finish, with dimensions of 387 x 192 x 406 (HWD, mm). While Sony doesn’t appear to give any specific instructions with regards to placement, placement out front (i.e. towards you), and close to the main unit appears to be its preferred position.

Supporting 3.1 channels, all three speakers hew to a 45 x 100mm cone type driver design with the centre designated for dialogue. The sub features a 160mm cone type design and all told there’s 400W of power on tap. 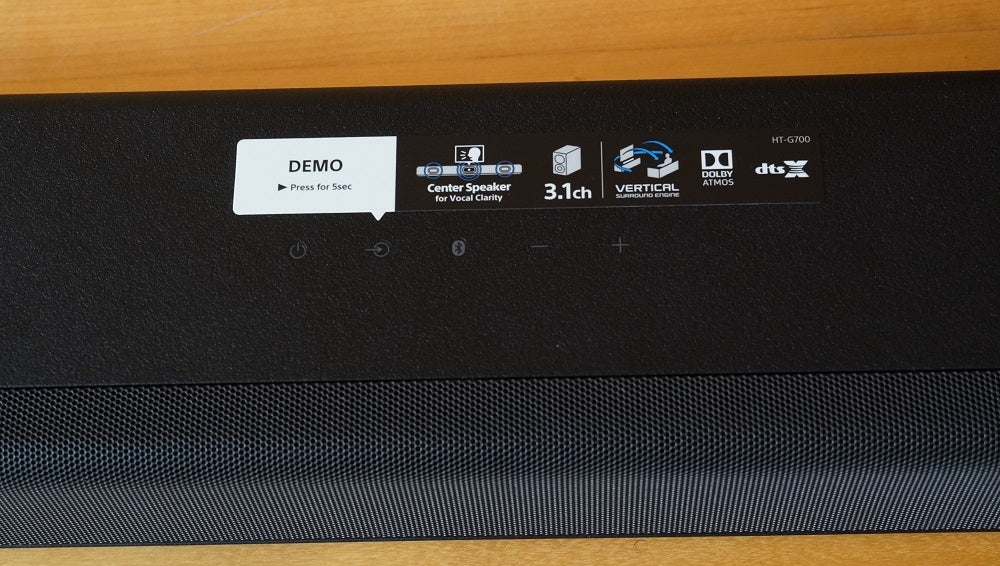 On the top plate are buttons for power, source input, Bluetooth and volume. If you don’t fancy getting up from your seat, the soundbar does come with a slender wand for operation. The layout is simple and the buttons self-explanatory, but you will want to get acquainted with it as you’ll be using it a fair bit.

The soundbar supports wall-mounting with brackets included in the box, though screws aren’t provided. An optical cable is also included for connection to a TV.

The most buzzworthy aspect of the HT-G700, is its Vertical Surround Engine. It aims to deliver a 7.1.2 surround sound experience using just digital sound processing.

It’s a lofty ambition, and it also means it conforms to your environment better, especially for those without the space for a full surround set-up. Both Dolby Atmos and DTS:X object surround sound audio are supported. 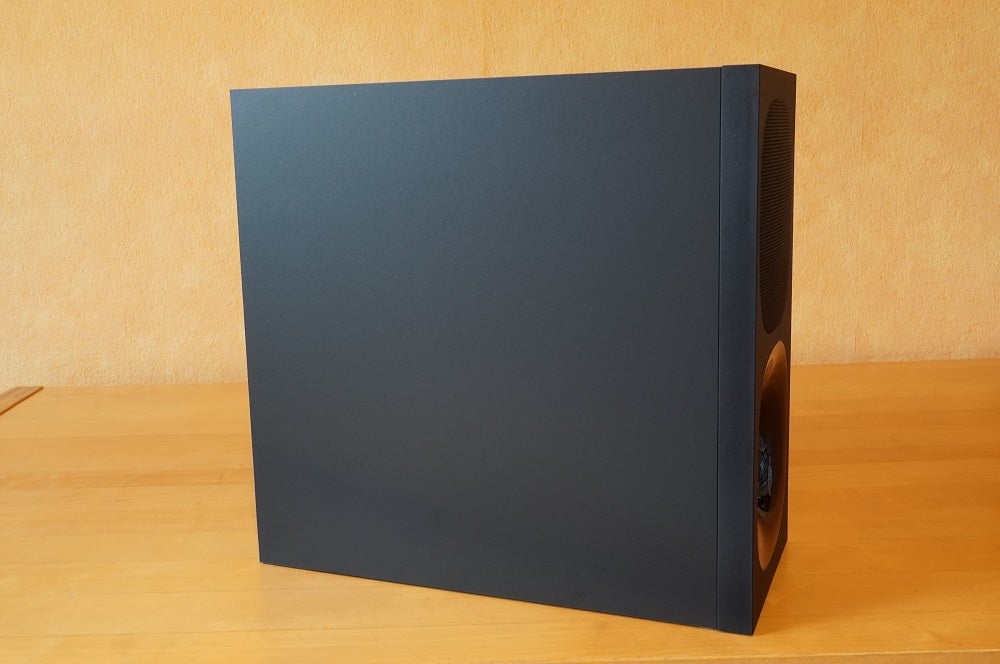 Also in Sony’s bag of tricks is the S-Force Pro Front Surround that virtually reproduces a surround field to give the impression of effects coming from the sides. S-Force Pro elevates the audio up so it matches the height on screen.

The HT-G700 doesn’t come with a plethora of HDMI connections. What it does have is a solo HDMI input, a HDMI eARC output and an Optical input. There is a USB input, but this is reserved for updates. 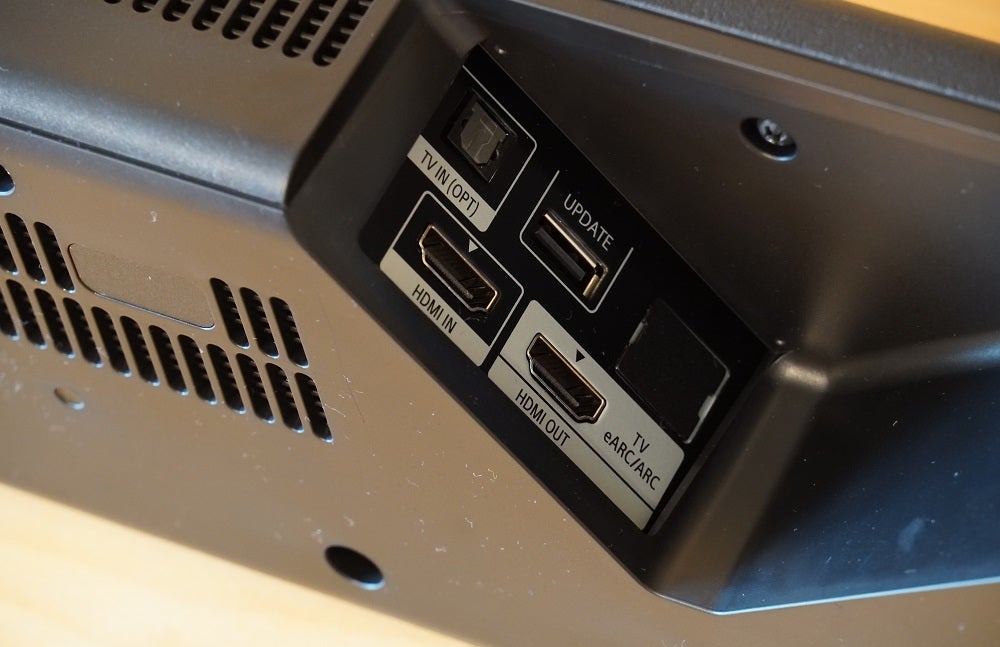 Passthrough of HDR10, HLG (which BBC iPlayer and Sky Q use) and Dolby Vision is supported. There are three audio modes available in Standard, Cinema and Music.

Standard focuses on midrange and treble reproduction and works best for TV. Cinema amplifies bass, while music hones in on voices. Auto Sound automatically selects from one of the three depending on what you’re watching. Press the Immersive AE button, and that switches on the Vertical Surround Engine to upscale content to 7.1.2 (this also works with 2.0 broadcast content). 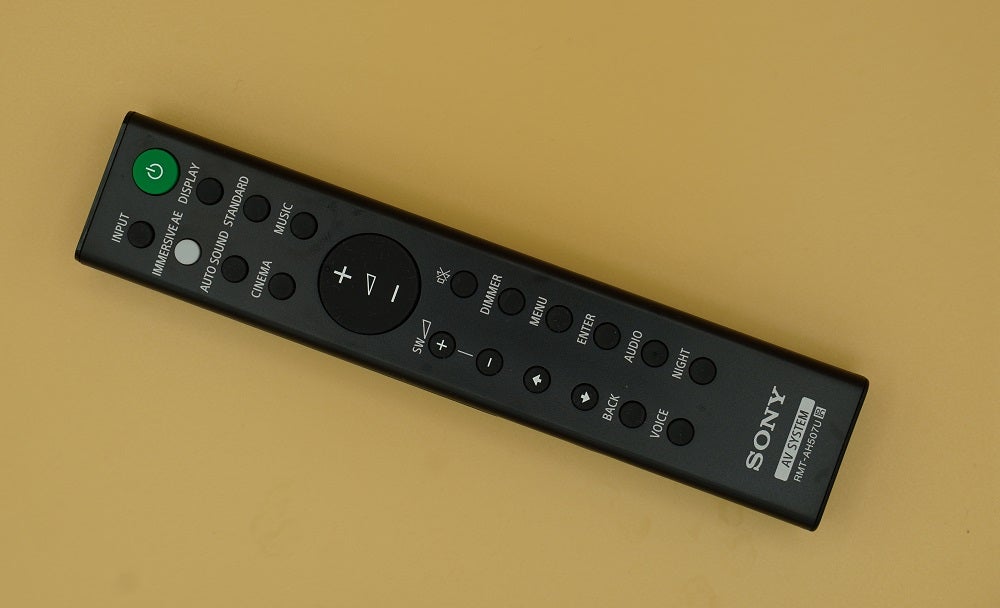 In terms of operation you should read the instructions first. The menu system is surprisingly deep and somewhat complicated. Once figured out, you can alter speaker settings, update firmware and change audio settings.

Bluetooth is 5.0, and supported codecs are SBC and AAC. Pretty much every audio track you can think of is supported by the eARC connection, including some you might not know of (DTS-HD LBR). However, the HDMI input doesn’t support audio formats with copy protections added, such as Super Audio CD or DVD Audio.

Sony HT-G700 performance — Vertical Surround Engine works wonders with height effects, but the bar is compromised in some respects

As a way of getting Atmos into the home, the HT-G700 is impressive. In other ways, Sony’s ambitions of a surround sound experience are overstated.

The first 4K disc to test the system is Blade Runner 2049, where Detective K heads to Sapper Morton’s farm. 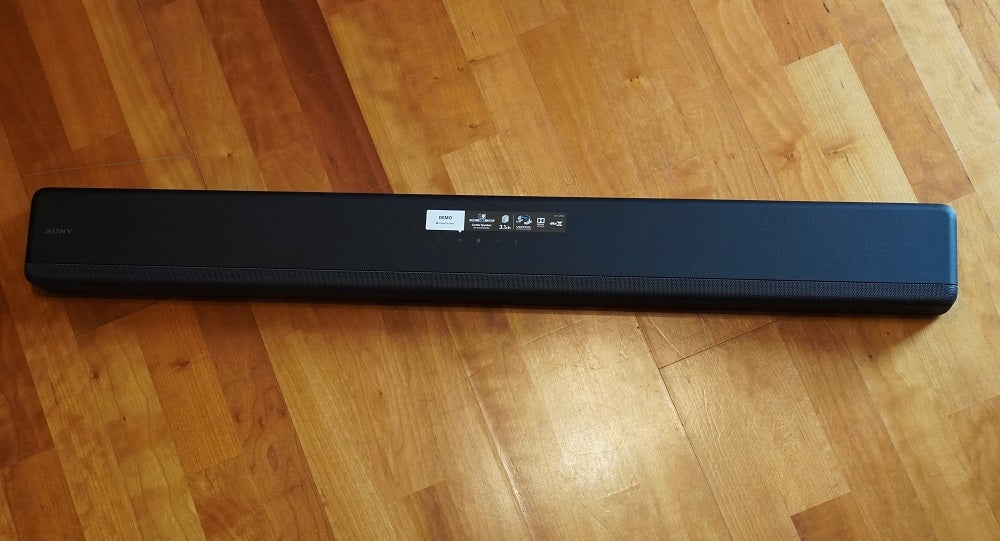 It’s a good sign of an Atmos’ soundbar if it can pinpoint where K’s spinner is in the sound field and the HT-G700 does so well. Even though it doesn’t have upfiring speakers, the sound of K’s spinner descending from the sky is noticeable and adds a sense of verticality.

It’s not quite as explosive or punchy as a soundbar with upfiring speakers, but it’s mightily impressive considering it’s doing this through digital processing. Throughout the film the height effects – such as various off world advertisements – ring true as they’re fired up towards the TV’s left and right. 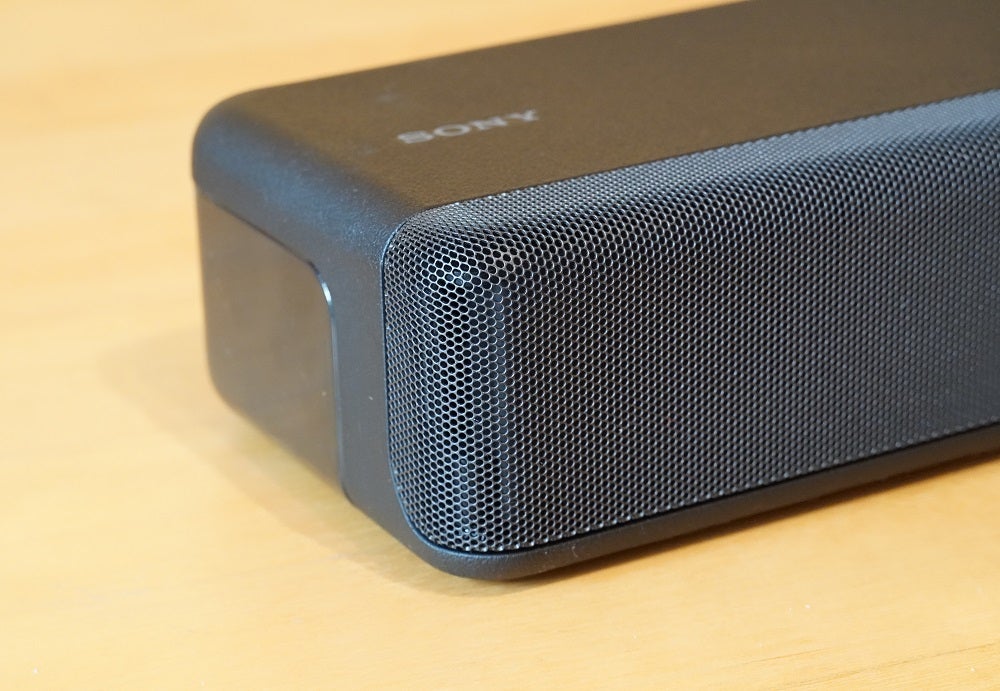 Detail levels are high – higher than the VIZIO SB36512-F6 5.1.2 Atmos system – though tonally it comes across as lean. Vocals are solid and delivered with clarity, while the positioning of effects ensures you get steerage across the front-heavy soundstage as well as an accurate sense of placement.

All of these attributes work a treat with 10 Cloverfield Lane (Atmos) in the scene when Howard confronts Michelle during dinner. You can hear the hum of the generator in the background underscoring the tension, and you pick up on the scene’s detail and nuance to the point where you can easily hear aural clues (such as a key point regarding a pair of keys).

Watching F1 cars zip around the Austrian Red Bull track (with effects disabled), and there’s a better sense of cars moving at speed as the soundbar fires sound out towards the side. I wouldn’t say it’s particularly spacious, nor does it fire sound towards the listener. It’s best to think of it more as a wall of sound than room-enveloping performance. I imagine there may be more credence to Sony’s claims when the HT-G700 is situated in smaller rooms. 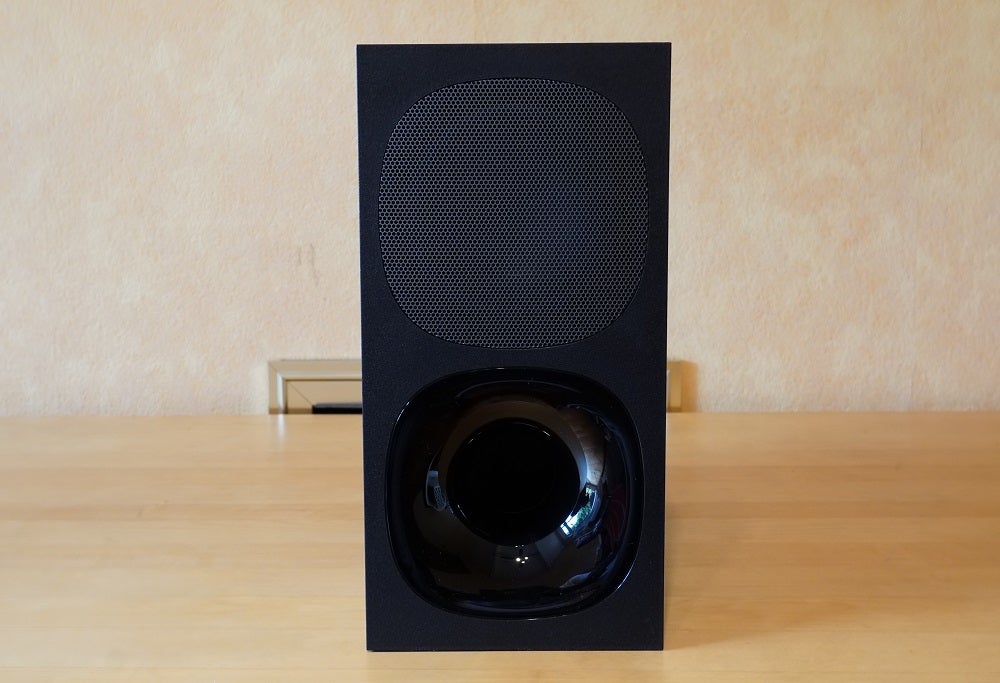 Dynamically the soundbar has good range – and as Baby Driver (Atmos) shows, it’s not shy of making a din – with the subwoofer providing tight, clean and punchy bass.

However, a 7.1.2 channel Atmos soundtrack does not easily fit into 3.1 channels. There’s an inescapable feeling that film soundtracks have a squashed or compressed aspect to them. This usually props up with music scores, which never really leap from their position at the back of the mix. HMS Surprise’ first encounter with the Acheron in Master and Commander: Far Side of the World (DTS-HD MA 5.1) feels it could benefit from more space. Canon shots whizz through the air, but sound hollow.

There’s a similar tone with Jumanji: The Next Level (DTS:X) feeling thin throughout. When the bar is given a lot to do – the fast action of the Michael Myers’ heist in Baby Driver – or given loud noises to deal with such as the car crash that starts off 10 Cloverfield Lane, the HT-G700 becomes slightly formless in how it describes the action, favouring loudness over precision. 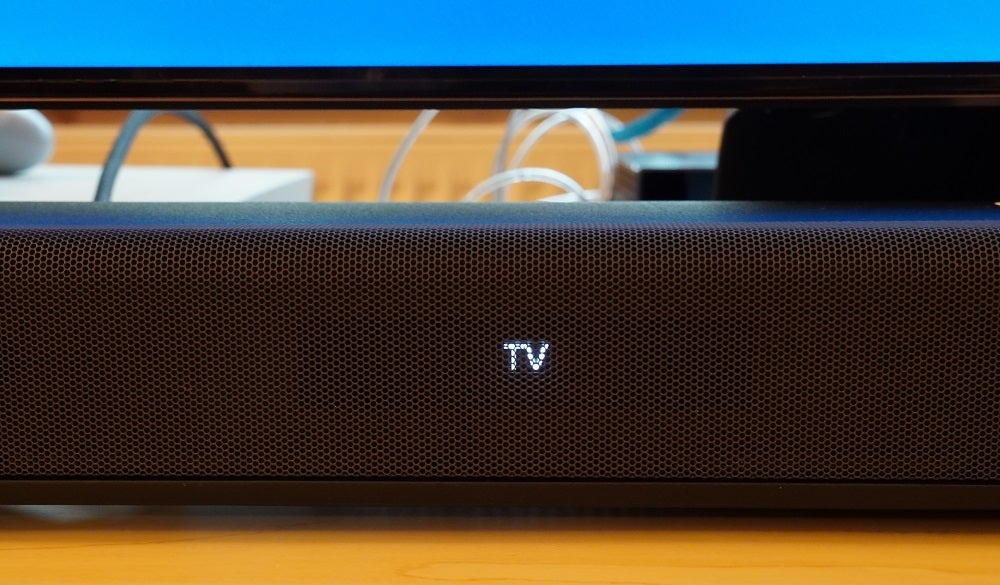 Listening to music over Bluetooth connection though, and there’s a good sense of rhythm to the Hamilton: The Musical soundtrack. The dedicated centre channel gives vocals space to breathe, with bass integration underpinning the presentation instead of dominating it.

Listening to all 9 minutes of Caravan from Whiplash and the soundbar keeps pace with the various tempo shifts and intensity in a highly enjoyable manner. I’d suggest turning the Immersive AE effect off with music as it’s not as expressive with it on.

If you’re interested in getting Atmos for a small room, the HT-G700 is a smart way of achieving that goal.

This is an ‘Atmos’ soundbar system for situations where it isn’t practical to fit multiple speakers in one space. When considered for smaller rooms, the HT-G700 makes more sense.

This bar puts in a solid, and at times impressive performance with film, TV and music alike.

Atmos is all over 4K Blu-rays/streaming services, while you can find DTS:X on 4K Blu-rays as well. If you watch a lot of that sort of content, then in terms of producing height effects that Atmos/DTS:X feeds on, you’ll be well served by the HT-G700.

You’re not maximising the space in your home if you have a big room and opt for the HT-G700. Get the Samsung Q950T instead…

Sony’s claims of surround sound from its S-Force technologies are overstated. This is very much a front heavy soundstage.

There is a thin, somewhat squashed aspect to the sound that we can hear. It takes a little away from the overall sound.