The VIZIO SB36512-F6, also known as the 36in 5.1.2 Soundbar system with Dolby Atmos, is a soundbar that supports Atmos and audio casting.

For those outside the USA, VIZIO is AV brand formed in 2002 and based in California. Despite being a relatively young brand, they sit in second place in the US TV market and are perched at the summit of the soundbar market.

This review pertains to the SB36512-F6 5.1.2 system and while it’s not perfect, it’s an impressive start to the brand’s life in the UK.

The black and grey aesthetic is on the plain side, with the subwoofer and satellite speakers sharing a similar look. While the wrap-around fabric looks nice enough, it’s a far cry from the more sleek looking LG SL8YG. 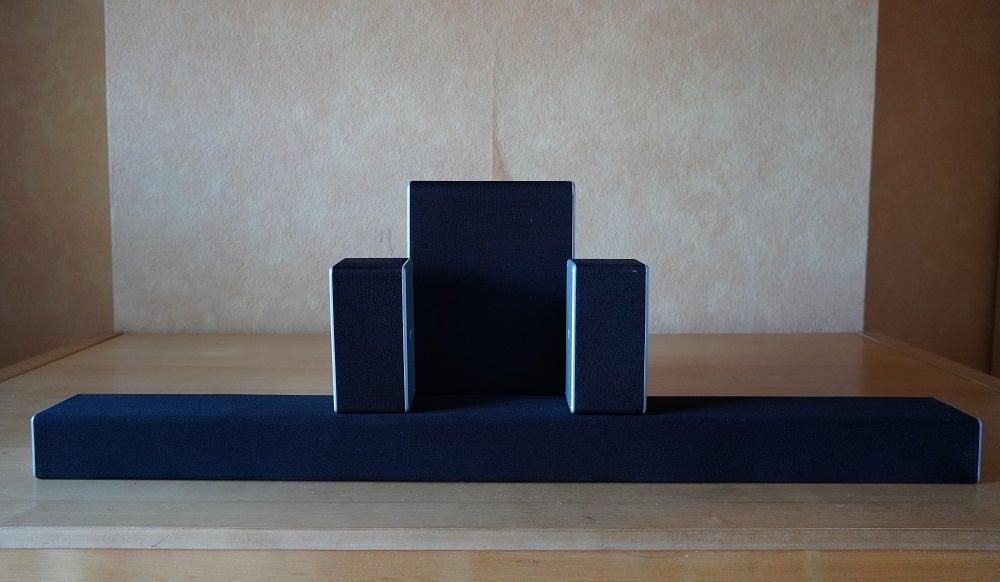 The main enclosure holds several speakers including a centre, two mid-range woofers, two upward-firing speakers for Dolby Atmos as well as a pair of passive bass radiators either side of the centre. 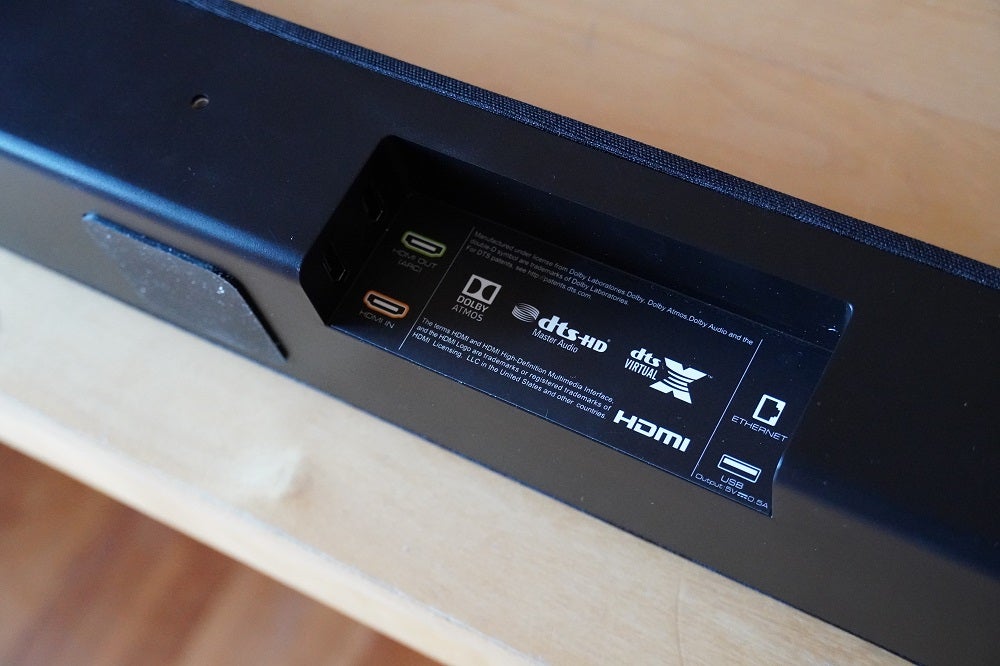 On the soundbar’s top surface are touch sensitive buttons for power, input, Bluetooth and volume. Underneath in two recessed cavities are HDMI In and HDMI ARC Out; optical out, 3.5mm AUX, USB (.WAV and MP3 file support) and an Ethernet port. The VIZIO SB36512-F6 also supports Wi-Fi casting in addition to Bluetooth streaming. 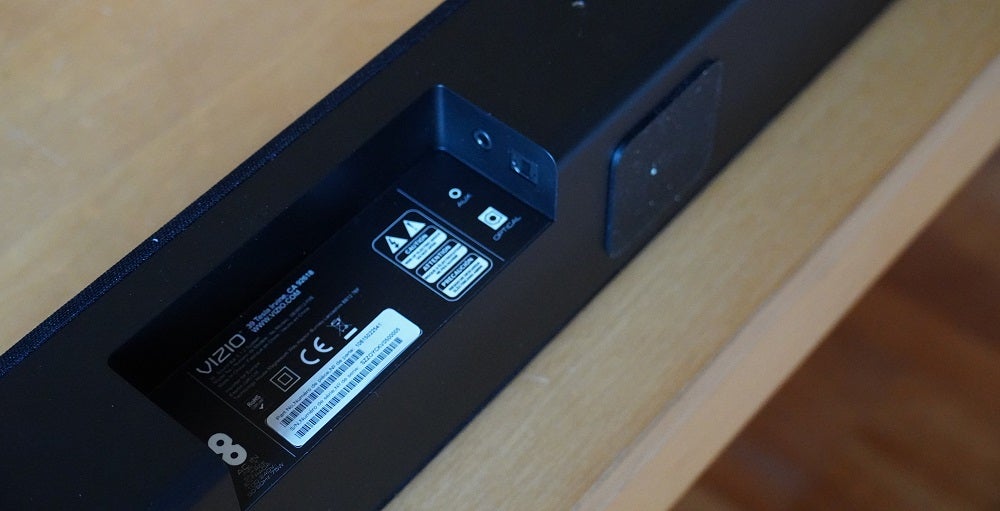 The accompanying remote features a small LED screen for scrolling through settings. It takes some time to get used to workings of the menu system, but it’s responsive enough.

Refreshingly, VIZIO has included HDMI, optical and RCA cables together in the accessory box. If you’re interested in wall-mounting, you will need to purchase extra screws to attach the brackets to the wall as they are not included. 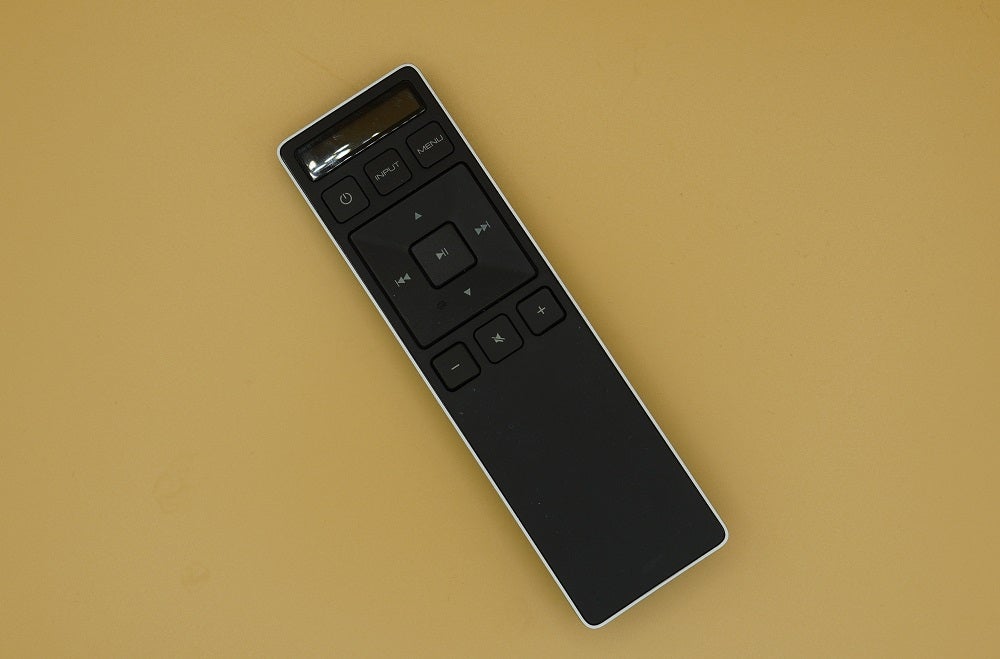 The VIZIO SB36512-F6 doesn’t have an LED display on the soundbar, using LED lights down its left-hand side instead. This can be problematic, largely in terms of discerning what the lights mean.

The accompanying manual explains all, but the various combinations and permutations means you’ll need to keep consult the manual to comprehend what they mean.

The SB36512-F6 is compatible with Atmos, Dolby Digital and DTS soundtracks and when each soundtrack is detected, the soundbar will flash a particular colour for five seconds. Dolby Digital is white light, DTS is amber and Atmos is green. Blue denotes Bluetooth, and is usually ever-present on the soundbar’s bottom left-hand side once it’s been set up. 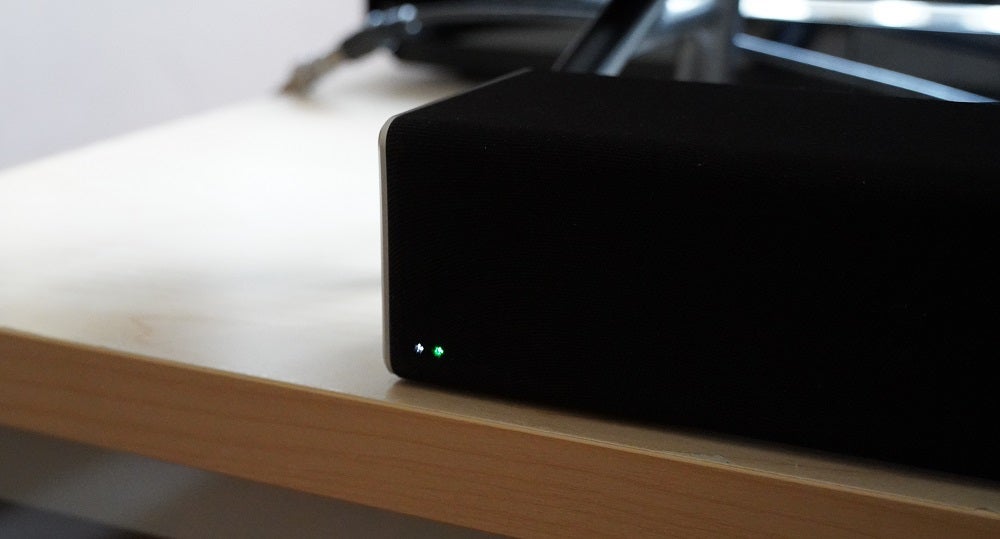 The LED indicators denote soundtracks, volume and changes in settings

There’s no support for DTS:X which is not an outright disappointment, but it feels as if there are enough 4K discs that support it to make it worth adopting.

Download the SmartCast Mobile App (Android, iOS) and it’ll turn your smartphone or tablet into a remote control for the system. Or at least, that’s what it should do. Despite several attempts to connect via Wi-Fi, the connection ended up timing out on each occasion.

Setup for the VIZIO SB36512-F6 is pretty simple. Wherever you end up placing the soundbar and satellite speakers, they should be placed close to ear level and I’d recommend having the subwoofer close to you to reduce the trail of cables from the satellite speakers.

VIZIO, like every other brand, recommends a flat ceiling for Atmos at a height of 2.2 to 3.6m for the best height effect. 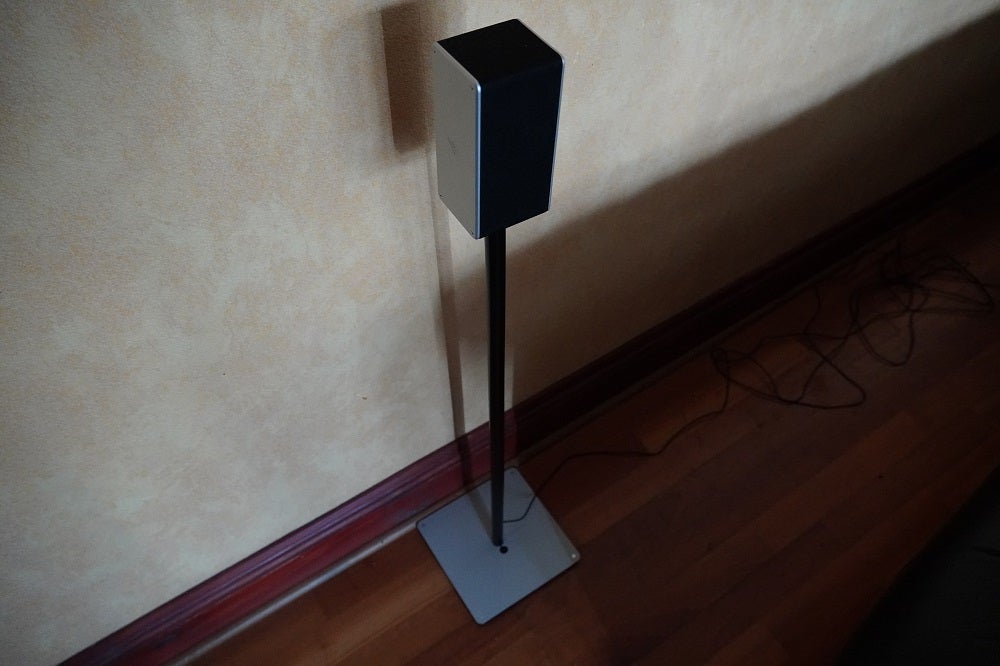 The stands by SoundXtra are an additional purchase

And with the numerous cables, VIZIO lists them in order Good to Better and Best, which are most suitable for hooking up to a TV; from 3.5mm to RCA Digital optical and HDMI as the ‘Best’ option of course. If you want to connect a Blu-ray player, satellite box or game console, it’s best to do so after the initial setup.

Another good aspect about the inclusion of RCA and a digital optical cable is that you can connect to more devices, whether that’s laptops or network media players, etc.

First up is Alfonso Cuaron’s Gravity, one of the first titles to get a Dolby Atmos soundtrack.

From the off, the rears afford more space than you’d get from just a soundbar and subwoofer. The swell of sound that opens the film feels enormous and while dialogue is centred, there’s placement in the rears for voices off-screen which serves to open the soundstage further and help generate that sense of surround sound. 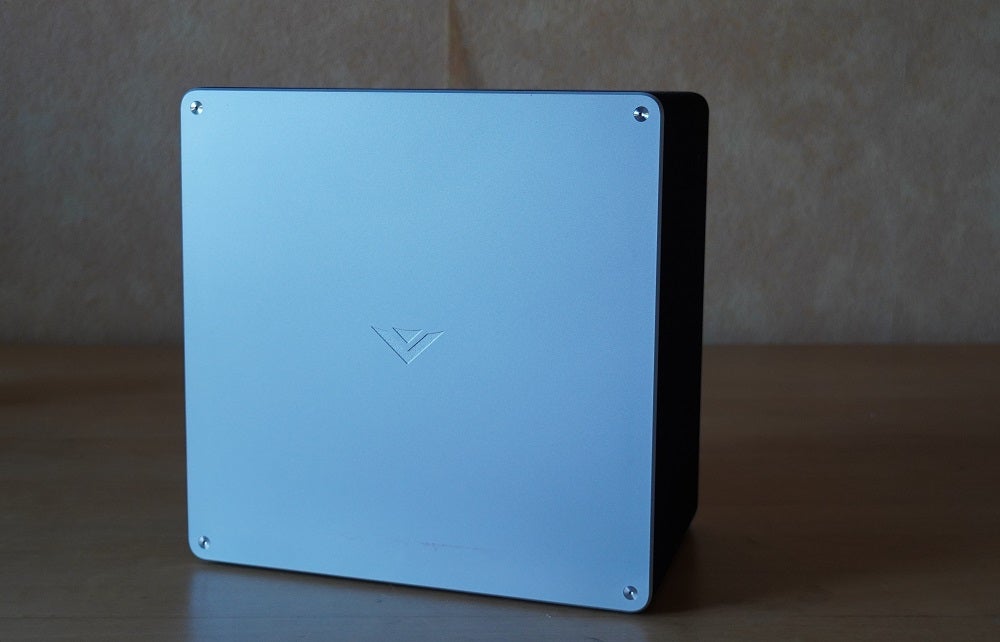 Moving to Star Wars: The Last Jedi and conversations between Rey and Kylo Ren happen around you as echoes of their dialogue reverberate in the fronts and the rears.

Dialogue is delivered with clarity, and the soundbar convinces when panning sounds across the soundstage, like when an X-Wing flies across the screen. One thing that becomes noticeable though, is that the height channels aren’t hugely pronounced. John Williams terrific score is often placed in the heights, but it’s presence can be rather inconspicuous at times. 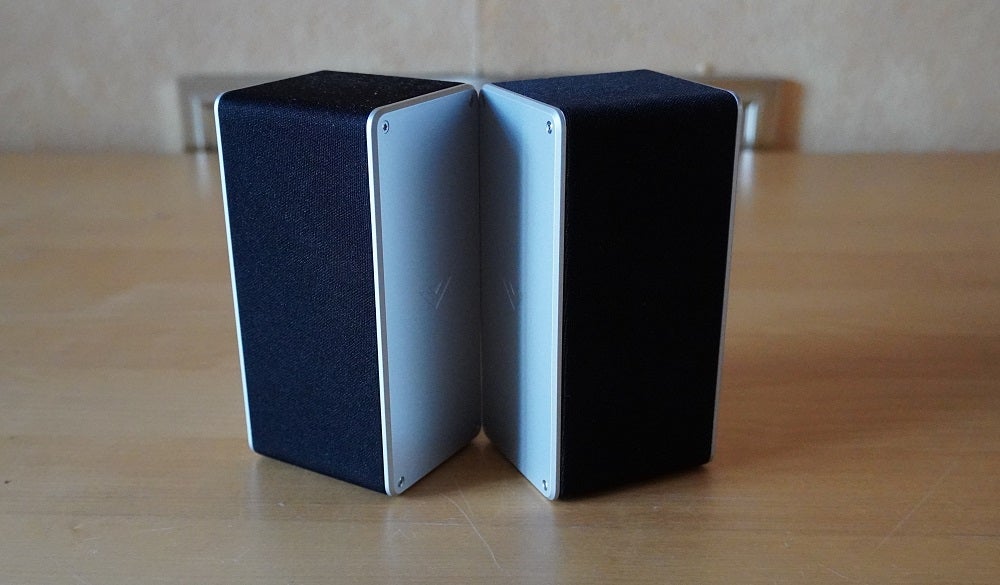 A switch to Blade Runner 2049 and the feeling that the Atmos height channels aren’t the tallest or the most articulate pervades. But 2049 does offer a showcase for the soundbar’s sense of outright power. Bass is room-shaking, even with the volume at half way, suggesting the VIZIO could fill larger rooms with ease. While detail is good and dynamically it’s handy, it arguably lacks subtlety.

Stepping down from 4K Blu-rays to BT Sport grants the option to play around with the height settings. Outputting in Atmos and the soundfield is large and encompassing. Turn the heights off completely and the focus turns to the commentary between the two match commentators and the din of the crowd is reduced.

Rear speakers are connected via the subwoofer

A move to the Height Virtualiser and the crowd noise is more felt, but lacking in scale compared to having the heights on. For sports fans, the expanded soundfield adds a bigger, almost stadium-like dimension to the experience.

And if you fancy using the VIZIO as a music system it supports Bluetooth playback. Just press the Bluetooth input on the soundbar’s top surface for five seconds and it’ll enter pairing mode. The soundbar’s character remains unchanged, delivering a powerful and enjoyable performance, but again there’s a feeling that it isn’t the most revealing of listens.

There aren’t many Atmos surround systems at this price and in one accessible package. The VIZIO SB36512-F6 is a surround sound system that delivers plenty of energy and power without breaking the bank. Factor in its inclusion of all the necessary cables and fuss-free set-up, and this is an easy home cinema system to like.

Other options include the LG SL8YG which has had a price cut in recent months. Purchase it in tandem with LG’s own SPK8-S rear speaker package, and it’s available for around the same price and has support for DTS:X and Atmos.

If best-in-class performance is what you need, Samsung’s HW-Q90R soundbar is the one to go for. At £1499, it’s nearly three times the price, but features more HDMI ports (three), Dolby Atmos, DTS:X as well as an excellent immersive audio performance.