Available on Xbox One, PS4 (reviewed), Xbox 360, PS3, Wii, Wii U
Genius, invention, imagination, brilliance, the desire to push things further than they have ever been pushed before – all these and more would apply to the team that came up with Trap Team’s revised version of the Skylanders business model. You might have thought you’ve purchased enough Skylanders to last a lifetime, but on top of a new generation of the little plastic figures, the latest version wants you to pony up for new Trap Team-specific Trap Masters and the trapping crystals they need to do their trapping with. You can almost hear the deafening ‘ker-ching’ from here.

But do the development team deserve the same plaudits? Almost, but not quite so much. Trap Team feels like a steady progression of what we had in last year’s Skylanders Swap Force, with a handful of great ideas that freshen up gameplay that occasionally threatens to turn stale. Kids will still find much to love in the new Skylanders, but it doesn’t always feel as exciting as last year’s game. 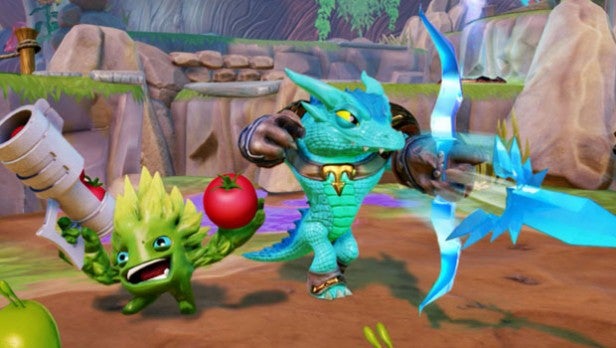 Where Swap Force’s big feature was the addition of two-part characters with swappable halves, this year’s USP is trapping. Trap Team comes with a brand new USB add-on, the Traptanium Portal, with a transparent floor, a surrounding ring that glows gently in a range of colours, and a chunky bit with prison bars and a hexagonal hole. This is where the new trapping crystals slot in.

Here’s how it works: defeat certain enemies on your way around the Skylands and you’ll be prompted to insert a trapping crystal of the appropriate element – water, life, earth, tech and so on. Slot it into place, and your foe is seemingly sucked into the crystal, complete with cool built-in light and sound effects; we love this stuff.

From there on in, you can switch from your current Skylander to the current villain at any time by pressing L2 (PlayStation), enabling you to wield their powers on the side of good for a limited time. What’s more, while the trapped villains aren’t upgradable in the way that normal Skylanders and Trap Masters are, each has a specific ‘redemption’ mission, and by completing these you win an upgrade for your grateful ex-baddie. 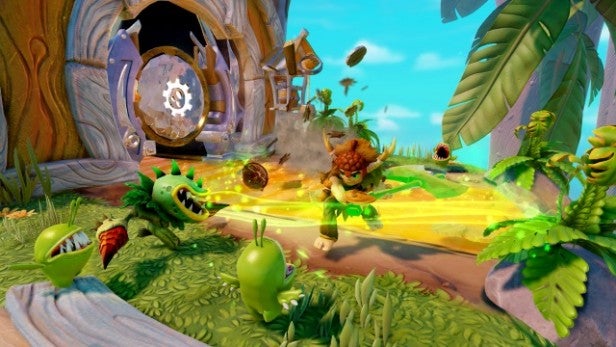 There are 46 villains to collect, but luckily you won’t need 46 trap crystals. Just like the Skylanders, each villain belongs to an elemental group, and as long as you have a trap crystal of that group, you can trap that villain. If the trap already contains a villain, it’s not a problem. You get a choice of which one to keep and which one to send off to your villain vault. Villains in the vault can be retrieved later, so while there are advantages to having more than one crystal for each element – you can swap villains of the same element in and out of combat when the damage builds up – having just the one is no impediment to trapping.

What will be is that Activision only supplies crystals for two elements – water and life – in the new starter pack. Defeat a villain of earth, magic, tech etc. and you’ll only be able to claim them for a bounty, not trap them there and then. They’re not lost forever – they seem stored in the villain vault, waiting to be unlocked – but you won’t be able to do so without additional crystals. That, of course, means coughing up for what appears to be a lump of transparent coloured plastic with a chip embedded somewhere inside. While your kids will doubtless find the business charming, you and your bank balance may not agree. 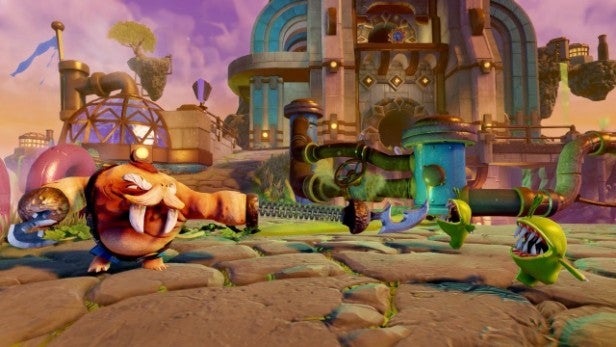 That’s a shame, because the villains are by far the coolest thing about Trap Team. They loiter around in their crystal prison while you’re playing, dishing out comments on the action and urging you to call them in. They have their own theme tunes, their own styles of combat and their own weird humour, and in a way they’re more distinctive than some of the new Skylanders, who are beginning to feel a bit generic.

Whether you’re battling as Chompy Mage, a chompy-mad wizard with a ventriloquist dummy of his favourite green critter, or the fiendish, freeze-ray equipped Chill Bill, the villains are where Trap Team comes alive. It’s hard to know who’s best. Is it Broccoli Guy with his urbane wit and groovy tunes, or Brawl and Chain – a weird hybrid of walrus, pirate and God of War’s antihero, Kratos?

The Skylanders, meanwhile, are also going through changes. Just as Skylanders: Giants bought us giant-sized Skylanders and Swap Force bought us two-part, mix-and-match combo figures, so Trap Team brings us the Trap Masters, larger than average-sized figures equipped with special crystal weapons. Some we’ve sampled at previous events seem fun, with Headrush’s bezerk stampede attack and Bushwhack’s mighty axe, and we’ve grown to like the starter pack’s bundled Trap Master, the bow-furing aussie crocodile, Snap Shot. They’re powerful characters to begin with, and only grow more so with the game’s upgrade system. 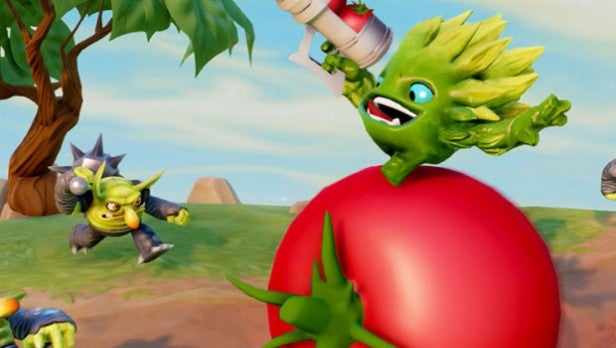 Unfortunately, they come with a major downside. Every Skylanders game has its share of elemental gates, which can only be unlocked by a figure of the appropriate element. Behind these gates you’ll find quests, challenges and unique items. Trap Team has them too, but most can only be unlocked by a Trap Master, and not one of your ordinary Skylanders.

Now, Skylanders from previous games can still be bought into Trap Team, with levels, upgrades and perk-providing hats intact. They’re still useful in a fight, and they still work effectively as extra lives when your Trap Master Skylanders go down. They can’t however, unlock the new-style elemental gates, which means you’re going to have to go out and buy at least seven more Trap Masters if you want to see all the content in the game. 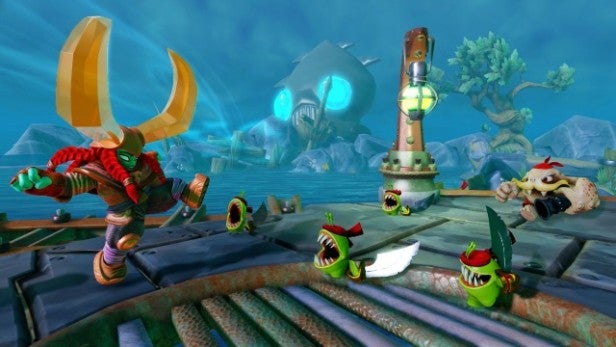 True, Swap Force had its own Swap Force-specific challenges, but you could still see the vast majority of the game with just the starter pack and a selection of old Skylanders. Not here. By the time you’ve added the starter pack, the trapping crystals and the minimum number of trap masters, enjoying Trap Team to its full is an expensive business.

But is it worth it? For most of its intended audience, yes. While Trap Team’s upgrade systems don’t seem as comprehensive or interesting as those in Swap Force, there’s still something hideously addictive about levelling-up and kitting-out your skylanders. The combination of fighting and platforming works just as well as it did last time around, and the best levels have some smart and inventive ideas. The villains – as we’ve said – are fantastic fun, and there’s a surprisingly nice line in self-referential humour, which will keep gaming mums and dads amused while the kids enjoy the more knockabout stuff. Our test team – aged 8 and 42 – are hooked. 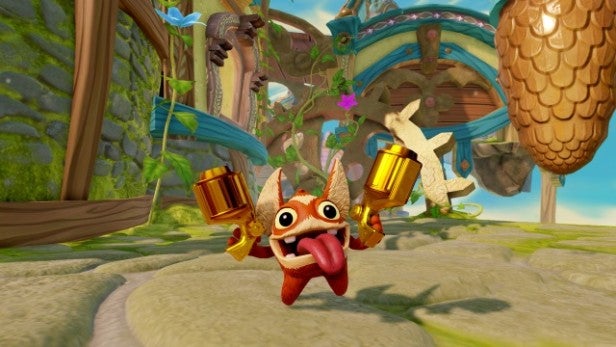 The presentation keeps getting better too. Nobody is going to accuse Trap Team of being a PS4 showcase, but if you have a next-gen console then you’ll appreciate the slick lighting and detailed textures – it’s getting closer and closer to looking like a CG animated cartoon. Much of the music is brilliant, particularly when it comes to the funkier villains, and the voice acting is consistently good, if a little annoying in the way that CG animated cartoon characters can be. Flynn the boastful but useless would-be hero, for example, seems to be beloved by the game’s young fans, but older players might think the joke is wearing pretty thin. BOOM!

But the general level design? Well, there doesn’t seem to be the sort of energy or invention we saw in Swap Force. While some levels come alive – a pirate-themed harbour, for example – others feel by the numbers and ever so slightly bland. The interest is bought by the characters, the humour and the combat, not by situations or mechanisms that make you stop and think ‘wow’. That’s where the likes of Super Mario 3D World or Ratchet and Clank forge ahead, and where Trap Team still falls behind. 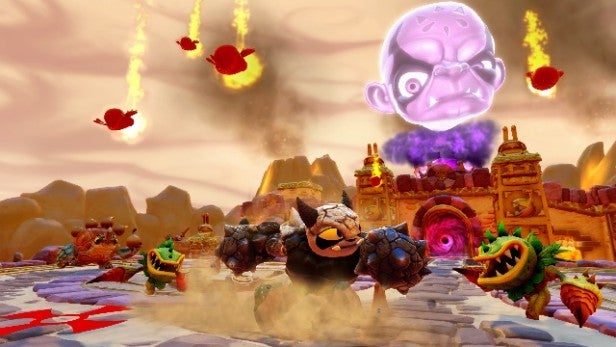 There’s a little more interest in the new components bolted onto the platform gameplay, including an Angry Birds-style exercise in destruction, a bizarre rhythm action game based on reggae toasting, an action-oriented tower defence game in the mould of Orcs Must Die, and even a Hearthstone-like card battler. These liven up some of the slower passages, and prove pretty enjoyable in their own right.

Trap Team still pulls in front of Disney Infinity 2.0 on the core campaign, then, but where Infinity can compensate with its creative aspects, Trap Team’s fun begins and ends with the game itself. We love the trapping mechanic, the extras and the villains, but the rising costs make Skylanders just a little bit harder to recommend this time around. There’s still plenty of life in the whole Toys-to-Life concept and in the franchise that started it, but it’ll take more than a new gimmick to keep Skylanders on top next year.

Verdict
The cool trapping mechanics and the villains keep the Skylanders formula from going stale, but there are signs that the level designers are running short of new ideas, and the requirements in terms of new figures and trapping crystals feel a bit cynical. Skylanders is still the best of the Toys to Life games for action – and there’s a real magic to trapping and taming those evil critters – but it needs more work to the core gameplay if the series wants to keep heading in the right direction.