Like Pokemon or Angry Birds, Skylanders: Swap Force is no longer just a game; it’s a full-scale, family friendly, cash-guzzling cultural phenomenon. The whole concept of action figures that become in-game heroes when placed on the glowing power portal was a masterstroke – the toys are attractive in and of themselves, but they also work to unlock portions of the game – and Activision has been fairly ruthless in exploiting it.

Even the first Skylanders had areas that were gated off until you had a character of a certain element, and often the only way to get a character of that element was to buy one. Now Skylanders: Swap Force adds a whole new wrinkle, and it’s one that’s going to hit you in the wallet. 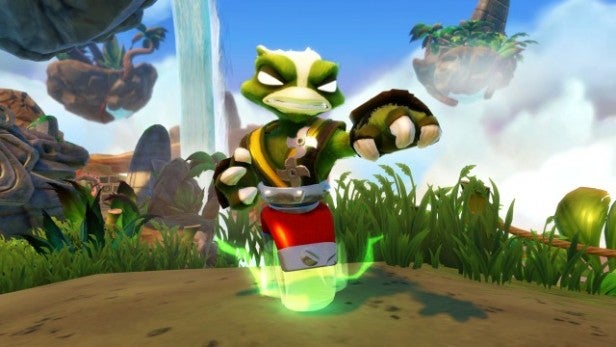 The clue is in the title. Skylanders: Swap Force adds to the existing line-up of first and second generation Skylanders and Giants with the heroes of the Swap Force; a band of proud warriors charged with protecting the magic-spewing volcano at the heart of the game’s plot.

Each member of the Swap Force has a separate top half and base, joined by two magnetic contacts. Pry them apart and you can swap half of one Swap Force hero with another. The difference isn’t just cosmetic; the new composite characters take on powers from both constituent Skylanders, so that you can combine Wash Buckler’s melee attacks with Blast Zone’s dash, or fit the former’s tentacles to the latter’s torso when you want to try a tower-climbing challenge. 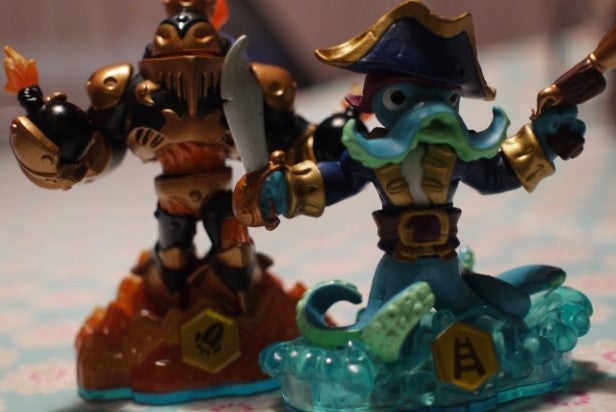 You’ll actually need some of these to open a new series of challenge gates that require two elements in combination together to open, though the game gives you an alternative in two player co-op. The gates will also open when two characters of the right elements approach at once. 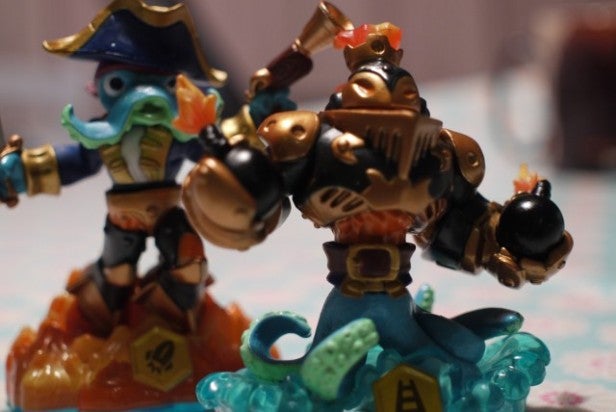 When the first Skylanders came out there was more genius in the concept and the marketing than there was in the gameplay. Whether you’re an overgrown kid or their offspring, there’s something lovable about putting a Skylander on the portal and watching it appear onscreen, or swapping Skylanders in the game just by removing one figure and sticking another one on.

Clicking top halves onto bottom halves only adds to the tactile fun. But the gameplay? It was all a little ‘meh’ – a bit too reminiscent of the kind of second-rate family titles that usually came tied-in to a film. 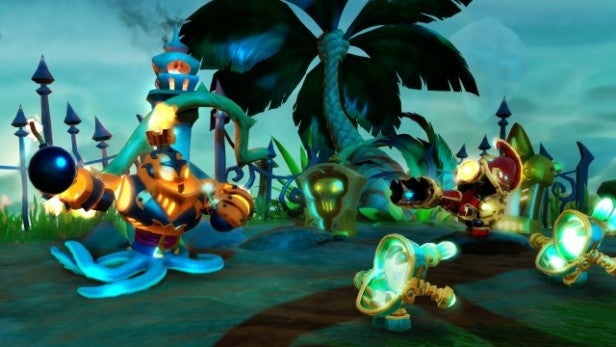 Guess what? This no longer holds true. Skylanders: Swap Force now plays like a child-friendly mash-up of a 3D platformer and Diablo, with the acrobatic exploration of the former and all the baddie-battering, loot-gathering and obsessive upgrading of the latter. If that doesn’t sound good to you, then you might want to think about a different pastime.

Each level sets you a mission, with a whole bunch of platforms, monsters and puzzles sitting between you and your objectives. By using your most awesome combat moves on the meanies you rack up experience, and level up just as you would in an RPG.

Meanwhile, the treasure you’ll find in smashable barrels or simply littering the landscape can be spent on new and stronger abilities, or on hats in the local store (hats being the Skylander equivalent of charms and armour). You even have to make choices about how your Skylander develops: do you work on one branching set of powers or another? 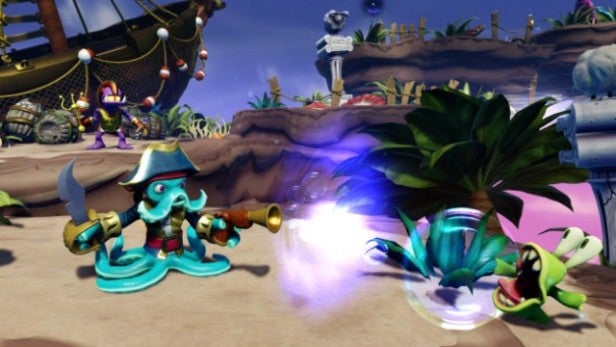 The old cycle of addiction works just like it did in Diablo, Torchlight and most RPGs and Diablo clones since. You fight to upgrade, then fight some more to try your upgrades out, then start thinking about the next upgrade so you can fight to try it out. It’s horrendously compulsive, particularly in the well-conceived two-player co-op mode, effectively making Skylanders (listen carefully, Mums and Dads) the Diablo you can play with your kids. 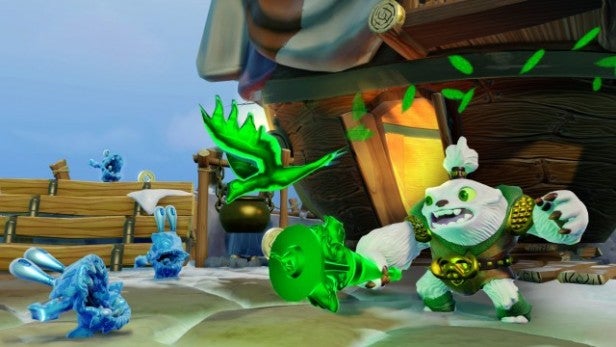 The platforming stuff is much improved as well, partly because the team at Vicarious Visions has taken the logical step and added jumping to the game. Nobody could argue that Swap Force is as brilliant or inventive as a Mario or Zelda, but there are some fine run-and-jump sequences, some neat block-sliding puzzles, and some great sequences of river-rafting, rail-grinding and underground exploration. Levels set in swamplands and creepy ruins have their own atmosphere, side-characters and running gags, and it’s all a lot more fun than you might have imagined.

Problems remain, of course. The Iloomilo-style puzzles used to open some gates soon get tired, and not all the activities, challenges and minigames are that fair or that entertaining. Most seriously, it continues to grate that there are so many areas of the game locked off until you stump up for more Skylanders.

Still, it’s worth noting that Skylanders: Swap Force will accept models from previous games, so you may already have all the elements covered. Overall, though, Swap Force works with a winning combo of enthusiasm and efficiency. The story and the characters have charm, new enemies keep things exciting, and the steady drip-feed of new powers and – if you’re feeling flush – new Skylanders, means there’s plenty of long-term appeal. 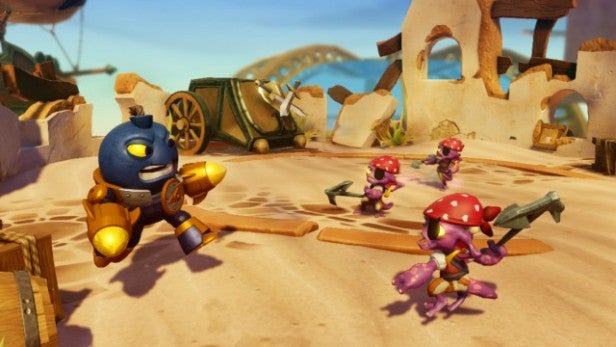 And, of course, there’s also the arena mode. The Skylanders you’ve levelled up, upgraded and equipped with magic millinery can be pitched against those of others, and as all the data  is stored in the figure itself it’s easy for your offspring to take one to a friend’s house for a friendly bout. Swap Force adds new arenas and new characters to the mode, though there’s nothing too avant-garde to upset a winning formula.

Meanwhile, Skylanders: Swap Force at last looks like it belongs in the HD console era, with a graphical makeover that ramps up the surfacing and lighting effects, boosts the detail in the character and scenery and throws in some nice cinematic blurs. What used to look like an upscaled Wii game now looks more like a CGI cartoon, which bodes well for the upcoming next-gen Xbox One and PS4 versions.

We’ve had our reservations about previous Skylanders, but with Skylanders: Swap Force those have pretty much disappeared. While you’ll still begrudge the high upfront cost and the ongoing expense of new figures, it’s a cracker of a family game. With improved platforming, better fighting and stronger character development than before it’s irresistably addictive, whether you’re an eight-year-old child or the forty-something parent playing it with them.

Next, read our round-up of the best PS4 games coming at launch and beyond