If you haven’t played Hearthstone, then you really, really should
play Hearthstone. Play it on an iPad. Play it on your laptop. Play it on
your hot-rod gaming rig or Windows tablet. Blizzard’s Warcraft-themed
take on the collectible card game is unquestionably one of the great
gaming experiences of the year, and with the new Curse of Naxxramas
expansion it’s only getting better. Best of all, you don’t need to pay a
penny to enjoy it – though you’ll probably end up splashing out a
little cash anyway.

If you haven’t seen the game, Hearthstone is what happens when you take the collectible card game, as popularised by Magic: The Gathering, then mercilessly streamline it, obsessively hone and balance it, and wrap the whole thing up in the World of Warcraft universe.

Each player chooses a hero and pulls out a virtual deck of cards, each card representing a minion, spell or weapon. You take turns to pull out cards from your current hand, purchasing them with a pool of mana that refreshes and grows with every turn until it reaches the maximum of 10. Cards can then be used to attack your opponent’s hero or their minions, or add buffs to heal your existing minions or make them more powerful. The first player to knock their opponent’s health down to 0 or below is the winner. 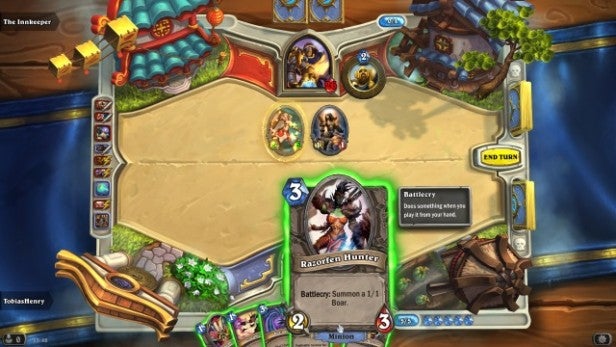 Of course, it’s a bit more complicated than that. Each minion has its own strength and health values, governing how much damage they can do or take. Some minions also have specific qualities. Most can only attack on the turn after the turn when they’ve been played, but some can Charge, and go immediately into battle, while others have a Taunt label which means the other player must attack them first. Others might lend the player or other minions a bonus while they’re on the board, or allow the player to draw more cards on top of the one they normally draw each turn.

Then we come to Battlecries and Death Rattles. Battlecries have an immediate effect when you play the card, dealing damage, drawing more cards or affecting heroes or minions in other ways. Death Rattles kick in when a card is destroyed, with similar effects.

If all this stuff sounds complicated, it really isn’t. Hearthstone is amazingly accessible, and it all becomes second nature with just a little time. All the same, there are layers of tactical complexity here, covering everything from how and when you play your cards, to how you combine cards for optimal impact, not to mention how you counter your opponent’s offensive and defensive strategies 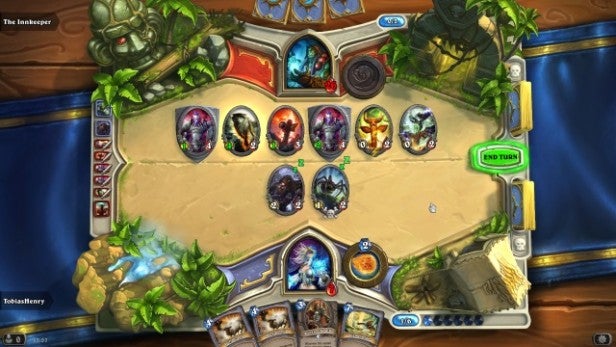 And that’s still only half the story. For one thing, Hearthstone has nine heroes, each with their own special ability, their own specific cards and their own tactical specialisms. Playing a Mage is very different from playing a Shaman, a Paladin or a Warlock.

For another, the real skill in Hearthstone isn’t just in playing decks, but building them. As you play through the game’s practice mode you’ll unlock more heroes and also more cards for each hero, and you can start combining class-specific cards and general cards into more powerful custom decks.

Practice mode puts you up against a fairly forgiving AI, though you’ll soon unlock the Expert mode, which toughens things up a little. However, to get your hands on the really good cards you have three choices.

Firstly, you can win packs of cards through the Arena – a special mode where players duke it out with semi-randomly generated decks for gold and cards. It costs gold to enter – bar one free go – but it’s worth it, and you can get your hands on more gold by playing straight player vs player games or completing Hearthstone’s daily quests. 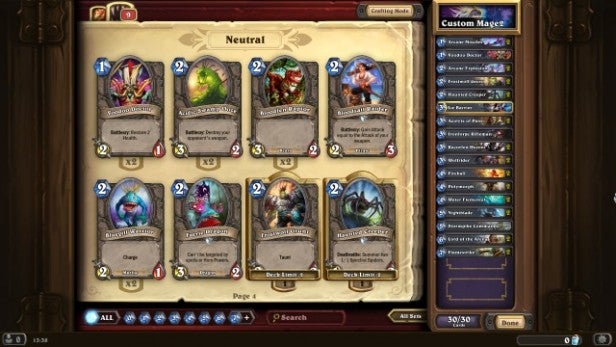 Secondly, you can go to the in-game store and buy booster packs, either using gold or real money. Finally, you can craft cards by effectively melting down existing cards and using the magic dust released to make new ones.

Obviously, Blizzard makes its money from the people taking option two and using real-world cash, but you can’t fault the Warcraft developer for the way it does it. Play a lot of Hearthstone and you can earn a lot of in-game gold. You can then use that in-game gold to buy more booster packs, then use those extra cards to play more Hearthstone. It’s hard not to dip into your wallet and buy a few booster packs the easy way, but you nothing will force you to, and there are some great tutorials out there on building powerful class-specific decks on a low (or even no) budget. 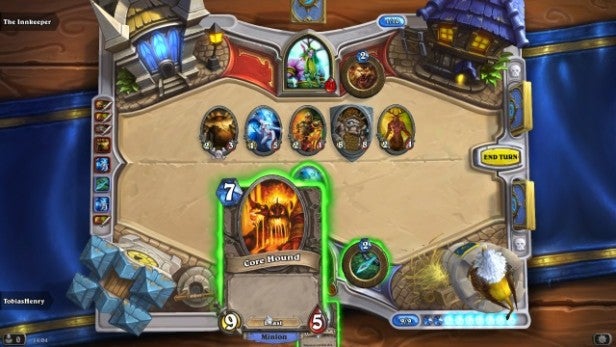 Hearthstone is a hugely impressive piece of work. For one thing, it’s beautifully presented, using hand drawn art and simple animations, all in Blizzard’s signature cartoon style, to bring the fantasy action to life. For another, it’s superbly balanced, both in the way it balances accessibility with real depth, and in the way it balances a huge range of cards, decks and strategies against each other.

Cards and heroes have been rebalanced several times and may go through more balancing in the future, while new cards have been added once or twice. The result is that while some decks and tactics can dominate for a while, that dominance never lasts or threatens players who can work out how to counter. You’ll be beaten by players with superior decks, but rarely can you say ‘that’s just not fair!’ 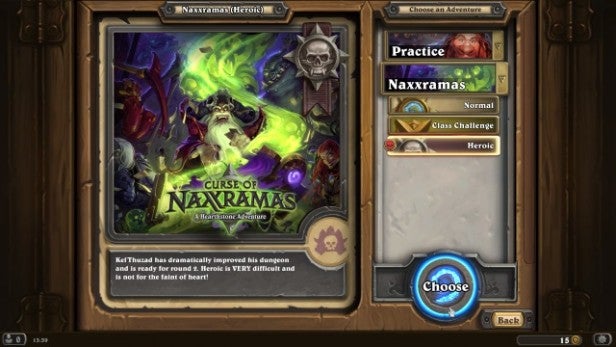 If there’s any criticism, it’s that Hearthstone is a heavily multiplayer-focused game, and as the player base becomes increasingly more expert, with a better range of cards, it’s getting harder and harder for newbies (or in our case, rubbish players) to find a way in. That’s where the new expansion, Curse of Naxxramas, can help. It’s a sequence of five single-player adventures themed after a legendary World of Warcraft raid, each one consisting of three battles against three bosses.

These bosses do two things. Firstly, they test your skills at building and playing decks, so that you rethink what you play and how you play it depending on the strengths and weaknesses of your opponent. The first two opponents in the first chapter, for example, are vulnerable to a fast-paced, minion-rush strategy, though I actually polished them off with a spell-wielding Mage rather than the low-level minion packing Warlock recommended by many Hearthstone experts. Get your deck and your strategy wrong, and you’ll find these bosses playing cards and combos that make them almost impossible to beat. 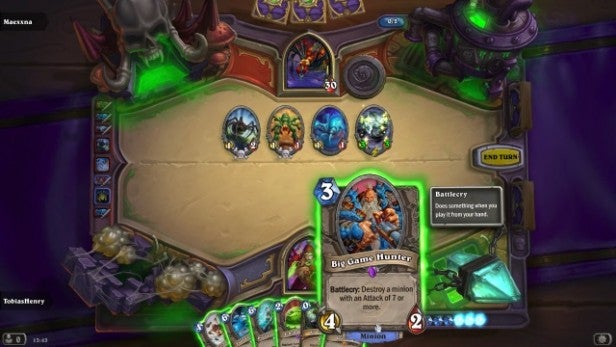 Secondly, they make you a stronger player. Not only will you win expansion-specific cards from them, which can be redeployed for new strategies in the normal player vs player and arena games, but you’ll also learn more about how to fight with cards and combos, and how to counter offensive strategies from other players.

The first chapter is brief, with just the three bosses, an unlockable heroic mode and a couple of class-specific challenges, but it’s exciting and full of Hearthstone’s vibrant personality, The remaining four chapters, or wings, will cost you £4.99 each or 700 gold, but you can get them early for as little as £13.99 as a bundle. Many Hearthstone players will think that a good deal for the extra cards each chapter adds alone.

The other thing worth mentioning is that, as Hearthstone works through Blizzard.net, you have one consistent profile and card collection no matter what platform you play on. We’ve been playing on iPad, Windows 8 Tablet and desktop PC, and it’s great to be able to grab whichever is nearest to hand and get a quick game in. And while it’s great played with mouse and keyboard, it’s perfectly suited to touchscreen play.

Verdict
Hearthstone does for collectible card games what World of Warcraft did for MMOs: taking a niche genre and transforming it into a mainstream-friendly hit that’s primed for success. It’s hugely accessible and incredibly enjoyable, even when you’re getting crushed, yet there are layers upon layers of strategy to be explored. If you haven’t tried Hearthstone yet, then do so – just don’t blame us if you can’t give it up.