Khabam! Last year Activision’s Skylanders was the ‘toys to life’ game to beat, but this year Disney’s newcomer is back with a super-powered triple blow. Last year’s model had its flaws – not least in its slight playset campaigns – but with its focus on creativity it made a compelling rival. Skylanders had the stronger gameplay, but it couldn’t match Infinity’s Toy Box mode, which gave players scope to sculpt and populate their own worlds, then turn them into playable adventures.

That returns for the second version (Wham!) accompanied by revised and stronger gameplay (Bam!) but its killer blow comes with the content. No longer reliant just on Disney/Pixar properties, it now features The Avengers, Spider-Man and Guardians of the Galaxy, giving Infinity not just some of the biggest names in comic-books and movies, but the nearest thing to the licensed game of this year’s biggest family-friendly blockbuster movie. Khabam, indeed. 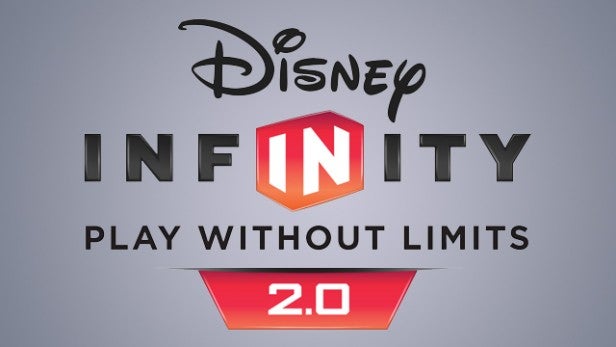 Up to a point, this approach works incredibly well, and the Marvel Super Heroes starter pack makes for an impressive bundle. Inside you’ll find the new USB Power Base, new figures of Iron Man, Black Widow and Thor, plus a clear Avengers playset piece based on Tony Stark’s Manhattan HQ. You’ll also find two Power Discs, which replace the playset piece and unlock additional mini-games (more on these later).

Owners of the original product might spot something immediately. In Disney Infinity only characters tied in to a specific franchise could play in that franchise’s campaign, which meant that – with only one character from each franchise in the box – you needed to buy additional figures for co-op play. Now, however, we get three Avengers in the pack, so co-op play now comes, as they say, in the box. 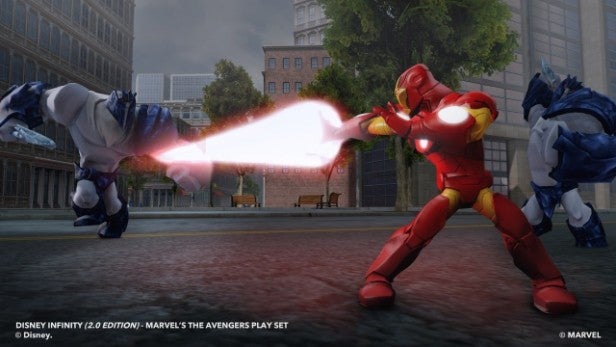 There are many things that Infinity 2.0 nails in the Avengers campaign, and that includes the spirit and style of the three bundled heroes. Partly it’s a question of good character design and voicework; Each cartoon Avenger looks and feels spot-on, and while only Samuel L. Jackson’s Nick Fury has the original actor’s voice, the stand-in cast do a great job of filling in.

More importantly, each character has the moves and the abilities you’d expect. Iron Man fights with a combination of fists and repulsor rays, while Thor batters his way through enemies with his mighty hammer. Mjolnir returns when thrown, just as it should, and even smashes any foes hapless enough to be standing in the way. Black Widow, meanwhile, has the acrobatic and martial arts skills to deserve her deadly name. 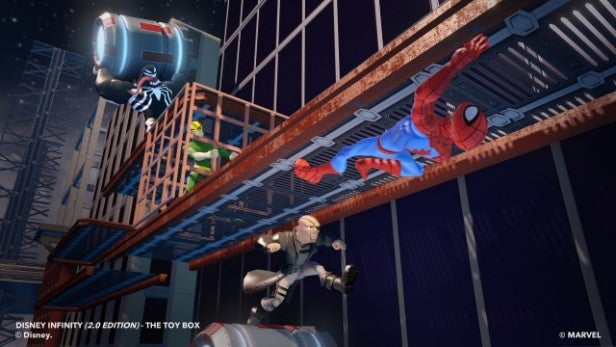 Despite first appearances, flying is included. It might seem that Iron Man and Thor can only hover, but squeeze the left trigger and they’ll fly off into the screen, speeding through the streets of Manhattan until they slam into anything big – usually the ground. On the one hand, this makes a mockery of a few missions where you’re expected to ride around on a motorbike or sky-bike (it’s Thor – he can fly already) but at least Infinity 2.0 obeys the first and most important law of any superhero game; your protagonists feel like proper superheroes.

What’s more, their powers get stronger as the game goes on. Villains smashed and missions completed mean experience. Experience equals levels, and levels give you skill points to distribute. With these you can buy spectacular and devastating special attacks or upgrade the attacks you have already, making each of Earth’s mightiest heroes that little bit mightier. The combat has a nice flow from the start, but the introduction of the special attack gauge and special attacks adds just a hint of strategy, and it can be incredibly satisfying to fire off a volley of rockets or a lightning strike on a bunch of Ice Giants on their way to do you harm. 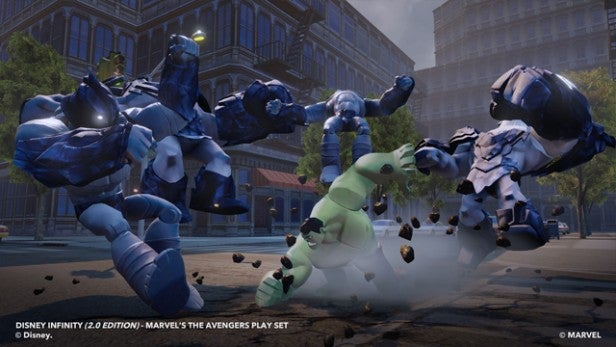 Marvel’s fantasy Manhattan makes a bigger and more exciting open world than any of the playsets in the original Infinity, and the plot, which sees Loki causing chaos with fiendish TV-headed villain Modok and a bunch of ice giants, is more engaging too. The core gameplay is stronger and more polished, and all that upgrading gives you a little extra payback as you play.

Unfortunately, the campaign still falls slightly flat. It’s a bigger open world, but not really any more convincing. We get traffic and pedestrians, but no real interactions with them, and the area is bound by artificial limits, so that you don’t have to fly too far before the screen fades and you’re returned to a central point. 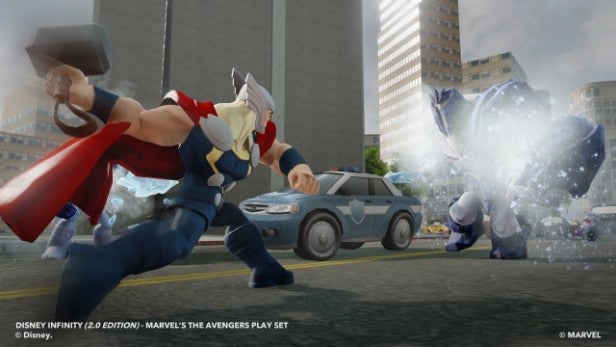 More seriously, there’s just not enough imagination on display. Nearly everything you do involves fighting ice giants, with just the odd drone thrown in for good measure. The ice giants come in several different flavours, but master a few tactics and you’ll thrash them all. The most challenging missions are (sigh) the escort missions, where the difficulty comes in making sure that whomever or whatever you’re protecting doesn’t get smashed up while you’re battling on. Those exuberant superpowers ensure the action never gets boring, but a little more invention and variety would have made for a vastly superior game.

That’s a problem in a game which – unlike its predecessor – doesn’t have two more playset campaigns to entertain you. Instead, we get two smaller-scale mini-games; one a Guardians of the Galaxy-themed Diablo clone set in the notorious Kyln prison, and the other an Agardian-take on Tower Defence, where you set up turrets and traps to halt a steady stream of ice giants while tackling any stragglers yourself. Both are fun for a while, while proving how versatile Infinity 2.0’s creative tools can be. Neither, however, is a serious replacement for a lengthy, well-paced and interesting campaign. 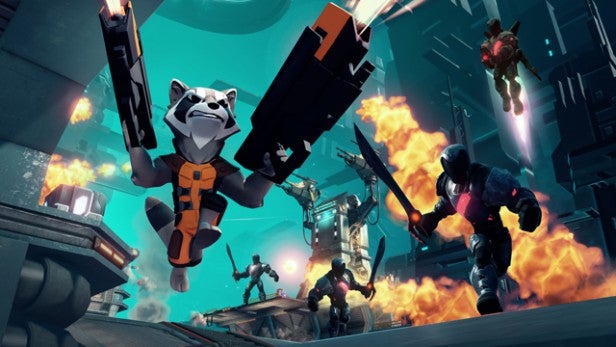 To get one of those, you’ll have to splash out some more money, and at £30 for the Spider-Man or Guardians of the Galaxy playsets (both including just two figures) they don’t come cheap. On the plus side, figures are no longer quite so segregated into discrete franchises. Collect tokens hidden in the city and you can introduce Rocket Racoon or Nova into your Avengers adventure, and we believe that the same is true with specific Avengers heroes in the other sets.

Overall, we’re still a little disappointed by the playset content. Though it holds up better this time around, it still doesn’t hold a candle to the mayhem of Lego Marvel Super Heroes, which allowed you to play with the whole range of Marvel heroes against an impressive rogues gallery of Marvel villains, and without charging you more than the price of the disc. Of course, you don’t get the toys or the whole ‘toys to life’ thing, but wouldn’t you rather have a better game? 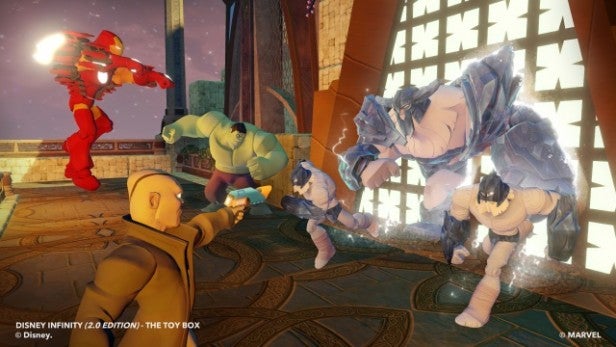 Luckily, Infinity 2.0’s real staying power is in the same place as the first edition’s: the Toy Box mode. You can still lose hours building sandbox worlds to mess around in, placing buildings and objects where you like, putting roads together, dropping vehicles on the roads and driving around. You can scatter enemies into the world and beat them up, or construct your own landscapes, buildings and weird Marvel meets Monsters U theme parks. And if you’re patient and prepared to get your head around Infinity’s mechanisms and logic controllers, you can still turn a toybox into a game, which might be anything from a 2D platformer to a 3D space shoot-em-up.

As in the first edition, you’ll need to unlock many of the various elements in the playset then purchase them in Toy Box mode, using Infinity’s currency: blue sparks. This time, however, you’re choices aren’t randomised, so you can buy whatever unlocked content you want as soon as you can afford it. I know several poor mums and dads who were reduced to farming for sparks and items to provide for their offsprings’ demands. Bad news, ladies and gents; it’s happening all over again. 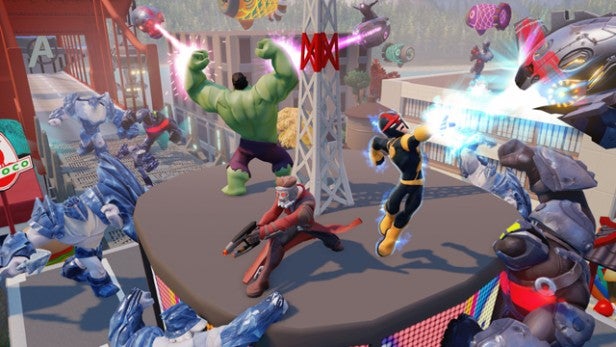 The biggest problem with Infinity’s Toy Box was that, while you could produce something incredible, there was a steep learning curve between the basic building, sculpting and dropping-in stuff, and the more complex background logic stuff that had to be in place before it all worked. In a way, you were learning how to program stuff, and while the game did its best to simplify, it didn’t do a great job of explaining how everything worked.

Infinity 2.0 has features to take some of the hard work off you, including little helpers who can generate cities, racing tracks or forests while you watch, or templates which give you some basic game mechanisms in one pop. All the same, there’s still a lot of trial and error and confusion involved in producing more sophisticated efforts, and it’s one area where there’s still room for improved tutorials and clear advice.

Yet for all that, Toy Box mode is brilliant, giving kids a place where they can create something cool, and bring in whatever figures they want to. It’s also now complemented by a Hall of Super Heroes, where you can admire your various heroes and their upgrades, and by a new INterior feature, where players can build and furnish a home and receive cute little visitors, some of whom might have tasks to complete.

If the playset campaign was all there was to Disney Infinity 2.0: Marvel Super Heroes, then it wouldn’t be a product we could hand-on-heart recommend. Put it together with the enhanced creation features, the mini-games and the INterior design features, however, and it’s a fantastic bundle that most families will love. If you just want a game with Marvel heroes, save your money: Lego Marvel Super Heroes is still the one to beat. If, however, you want a game that lets your kids create – and even program – while they play, then nothing else does it anywhere near as well.

Next, check out our pick of the Best Games of 2014