If you can't afford Sony's WH-1000XM3 over-ears, then Skullcandy's Venue are a decent substitute. While they don’t sound as good, aren’t as well made and the noise cancellation isn’t as effective, the sound is thoughtful and fun.

The Skullcandy Venue are a lower-cost alternative to “world beater” headphones like the Sony WH-1000XM3 and Bose QuietComfort 35 II. They have similar features: long battery life, active noise cancellation and, of course, Bluetooth. The Skullcandy Venue have Tile integration too, which you won’t find in other pairs bar the Bose SoundSport Wireless.

This is the same system used by the Tile sensors you might put in your wallet, or clip to a keychain. The Skullcandy Venue are headphones you can’t lose. Not easily, anyway.

The quality of the sound, build and active noise cancellation won’t worry Sony – and I’d have liked his pair even more if it was a chunk cheaper without the Tile side – but the additions are novel and these are rock-solid headphones with enjoyable audio. 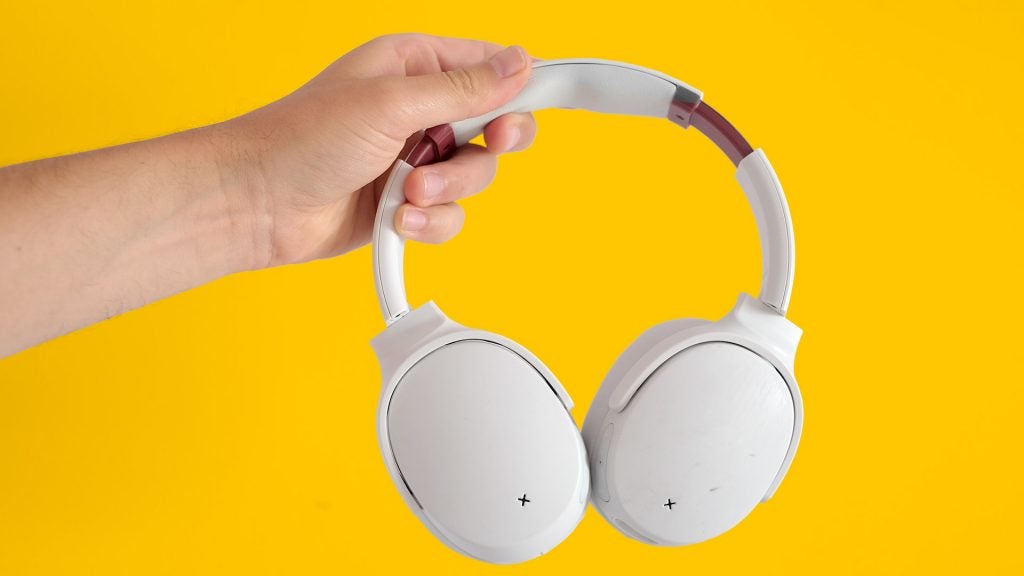 How does the Skullcandy Venue Tile feature work? You install the app on your phone, and it recognises the headphones as if they were one of Tile’s own panels.

The app lets you check out the “location history” of your pair and, the real useful bit, helps you find your Venue headphones if they’ve somehow disappeared into your house. This alerts sets off a frequency-shifting alarm that travels pretty well, given it is played through the Skullcandy Venue’s own drivers.

They need power and to be within Bluetooth range for this to work, of course. But that’s why the location history feature is so important. 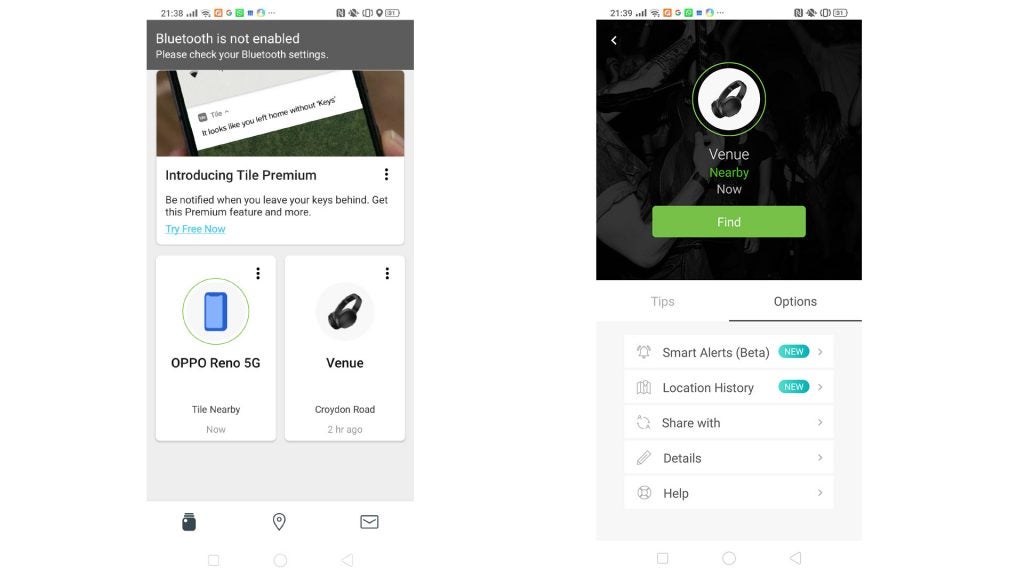 The Skullcandy Venue look like very conventional full-size closed back headphones. I’m a fan of the more sober designs Skullcandy has released over the past 18 months. Some might call it boring. I call it “not awful”.

However, I’m also used to Skullcandy headphones more aggressively priced than the Venue. And for the first few days of testing I assumed they cost less than they do. This is part down to my preconceptions, and partly thanks to the Venue’s build.

Almost every part of these headphones is plastic bar the inner band of metal that gives the headband its characteristic form-holding structure. The frame, the cups, the fake leather that sits over the pad foam: it’s all plastic. 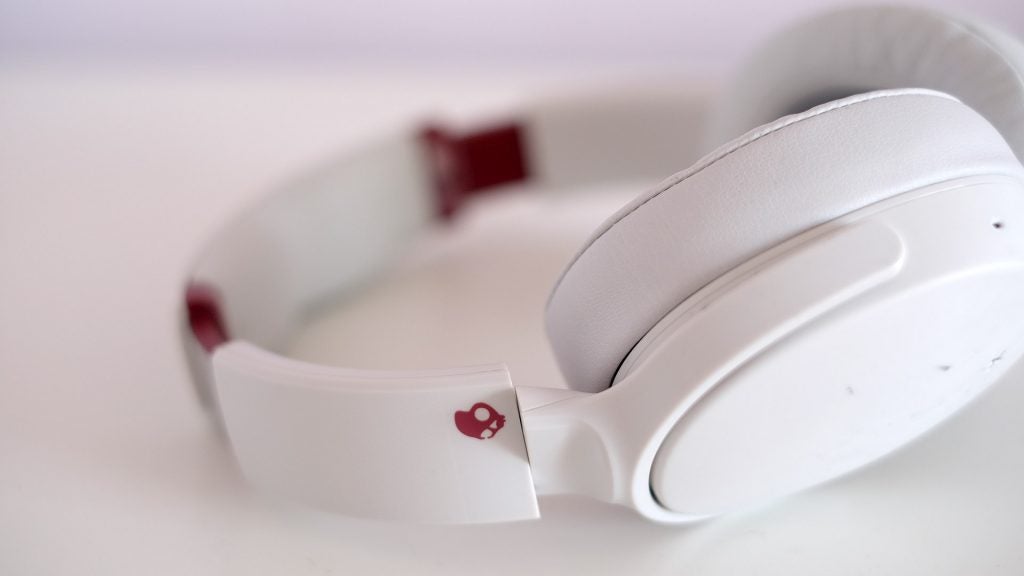 Skullcandy uses pleasant soft touch plastic for the cups, but the headband is a rougher cheaper-feeling plastic that would seem more at home on a sub-£100 pair. However, I have not noticed any of the creakiness some other online reviews suggest – and I’ve walked, and run, a bunch of miles with them on.

Low weight is the main benefit of an all-plastic design. There’s no sense of the Venue weighing down on your head. The band has a good amount of clamping force, likely because these are street headphones rather than a pair meant to cater to an imagined barely/rarely perambulatory audiophile class. 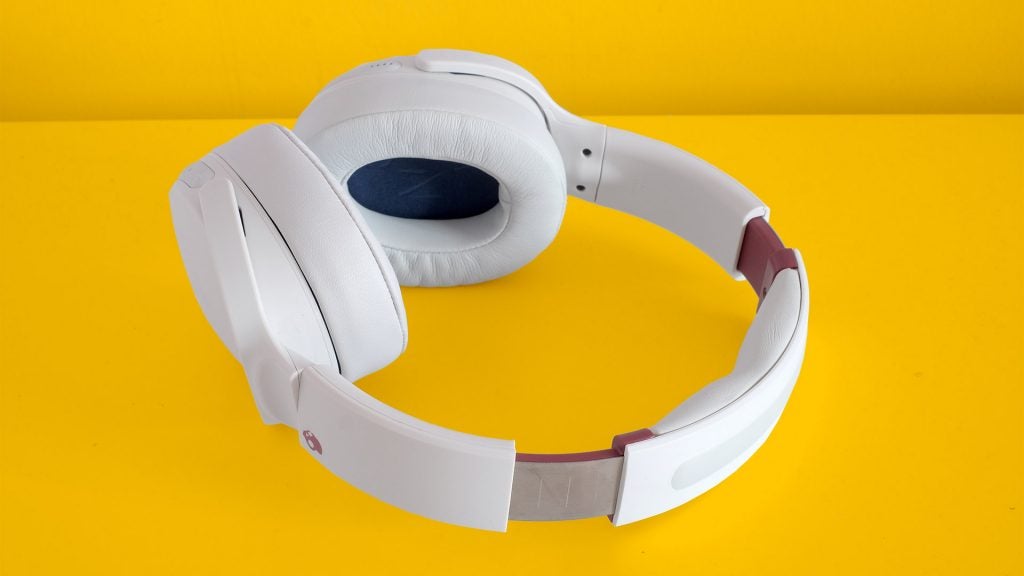 I have noticed the Skullcandy Venue tend to cause my ears a bit of mild discomfort after an hour or so. This is because the while the pads are quite large, the “holes” inside them aren’t actually big enough to accommodate my ears. Are my ears huge? Not really. You’d need fairly small ones for every bit of cartilage to fit inside these pads.

This is not an uncommon issue, though. It’s almost a given with full-size headphones that have a fairly firm grip and conventional pads.

There are some other neat touches to the Skullcandy Venue design. Five buttons are shared across the two cups, but they are tastefully arranged within two rubbery lozenges that avoid a button-peppered look. One side replicates the functions of a standard 3-button remote. You can change volume, skip tracks and, with a long press, activate your phone’s digital assistant.

The other side has the ANC button, and an LED power indicator. Most brands outside biggies like Sony and Bose do not offer great active noise cancellation. It’s tricky to get right, it would seem. 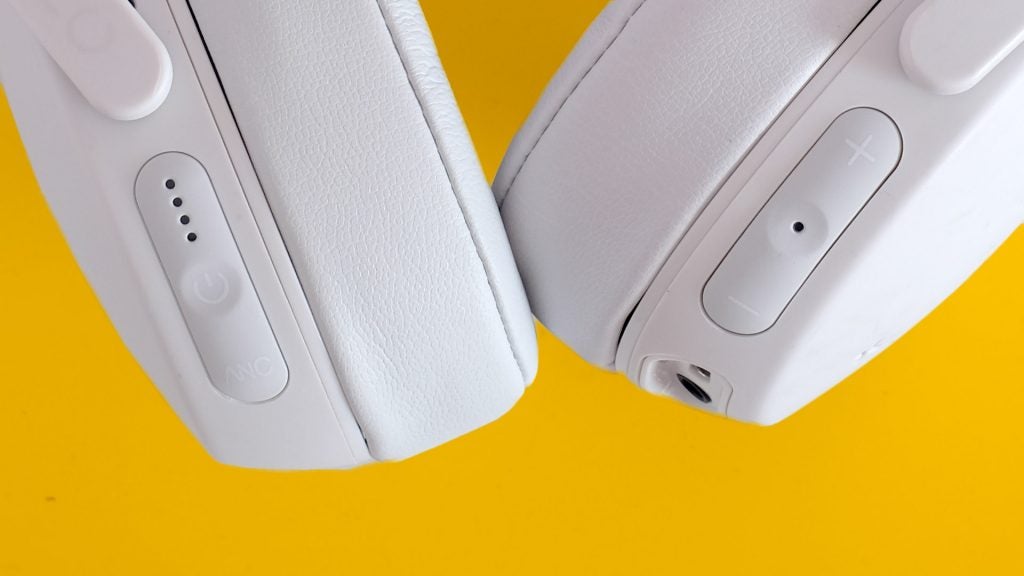 I was pleasantly surprised by the Skullcandy Venue’s noise cancellation. When walking down a busy road (on the pavement), the sound of passing cars is reduced to a Jetsons-like whoosh. It gets rid of the sound of air conditioning units, and most irritating office noise.

The Venue’s active noise cancellation is more than just a feature simply added because just about every higher-end headphone has it these days. Predictably, though, it doesn’t quite stack up to the Bose QuietComfort 35 or WH-1000XM3.

It can struggle with loud, low-frequency noise, which then passes through to the Skullcandy Venue like water flooding in from a broken dam. I would still class this as one of the best sub-£150 ANC headphones I’ve heard in terms of noise cancellation. It can make noisy environments nicer places to be. 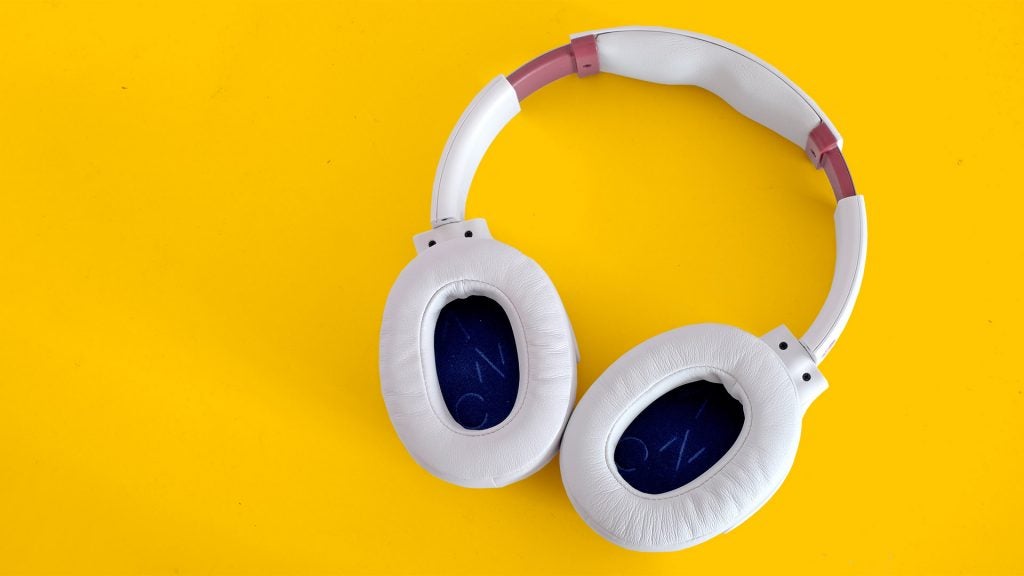 Battery life of 24 hours is sound too. This extends to 40 hours if you use the pair wired with ANC turned on. There’s a 3.5mm socket on the cup, although (as usual) it ends with a 3.5m jack rather than a USB-C or Lightning plug.

You charge the Skullcandy Venue using a micro-USB cable, which now feels quite out of date. Plenty of people still have micro-USB phones of course, but if you’re willing to spend £150 on headphones, there’s a very good chance you’ve already moved on. 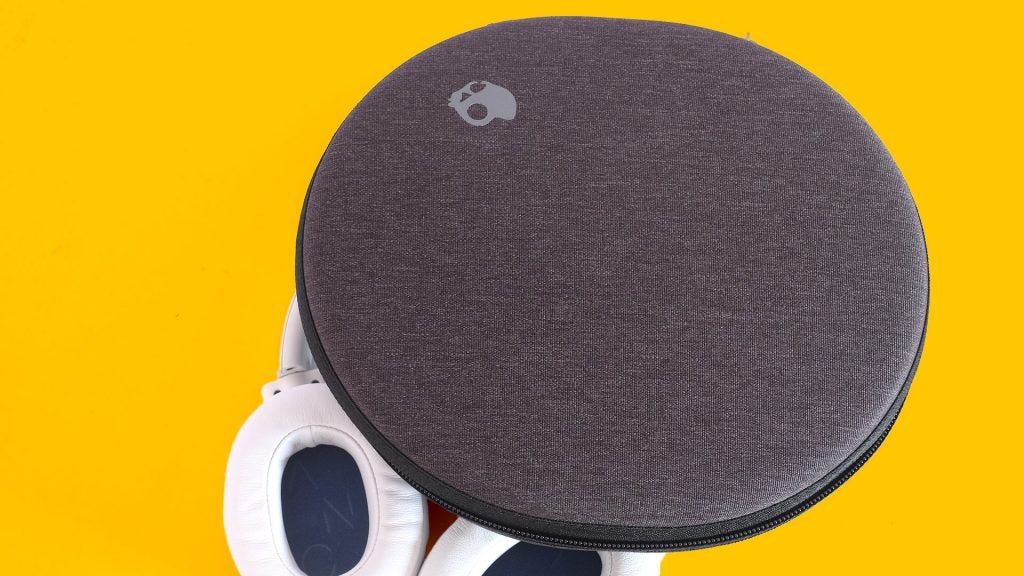 You get a semi-hard case in the box: bonus

The Skullcandy Venue have 40mm drivers and sound you might not expect from the once hyper-aggressive Skullcandy. These headphones don’t have comically inflated bass or even a typical bass-heavy sound.

They do have some extra bass punch, but it is almost exclusively in the very low and sub-bass region. This is the territory of real subwoofer bass, the stuff you seem to feel as much as hear. It’s an approach that lets the Skullcandy Venue gives kick drums bags of fun clout without any of the bass obesity or clouding of a “bad old” big bass headphones. 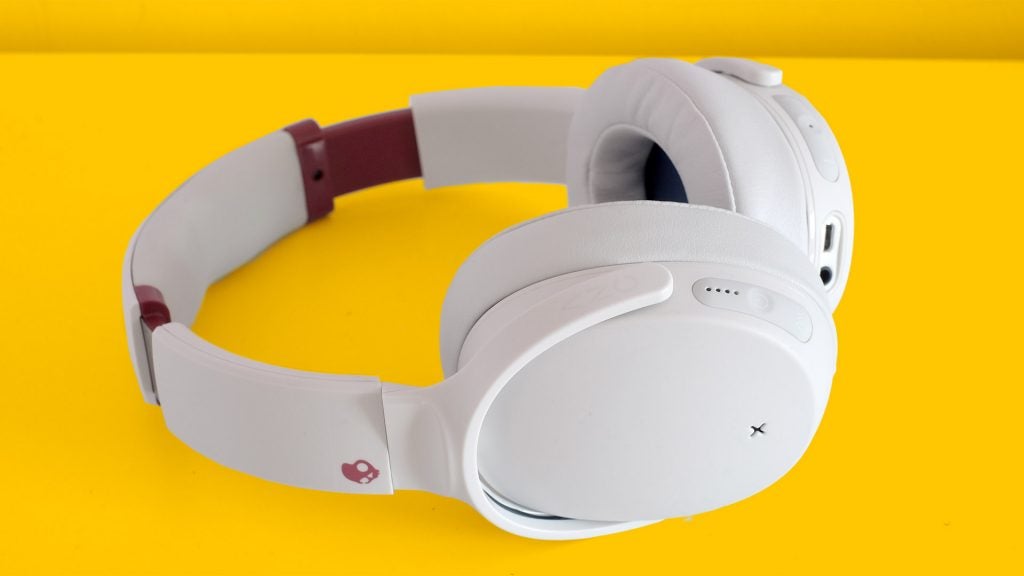 Sennheiser uses enthusiastic sub-bass in its Momentum pairs too. And, comparing the Venue to the Momentum 2.0, the bass boost is even more localised in this set.

The result is a headphone that can supply the enjoyable bounce you want for dance music, while still giving off the impression of a reasonably well balanced, clear-sounding signature. I wouldn’t call the Venue treble the stuff of high-end headphone dreams, but it is fairly well-resolved and delivers clarity without sibilance or harshness. 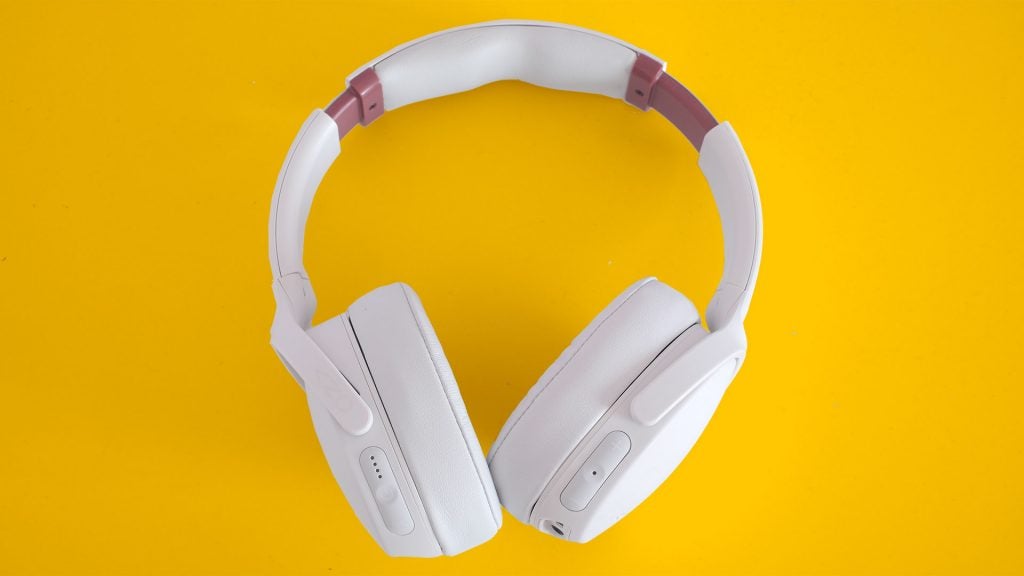 This kind of approach reminded me of the Audio Technica ATH-M50X, so I dug that pair out for a comparison. And that’s where I got to grips with the Skullcandy Venue’s real weak area: the mids.

There’s just not that much presence or detail to them. The Audio Technicas have far better mids, which leads to far better reproduction of deeper male vocals in particular. Listen to the Skullcandy Venue carefully and you’ll hear there’s a blank spot in their sound information palette that some songs reveal.

The Audio Technica pair also has wider, better separated sound, but that pair is particularly good in this area. 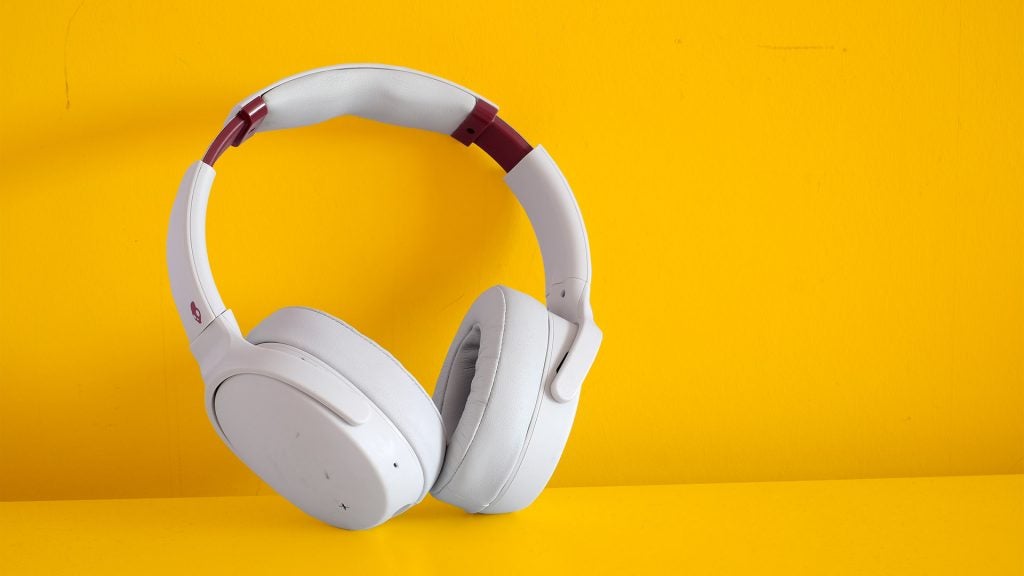 Should I buy the Skullcandy Venue?

Skullcandy’s Venue are practical headphones for those who would like the Sony WH-1000XM3, but can’t afford them. They don’t sound as good, aren’t as well made and their ANC isn’t as effective – but I was pleasantly surprised by their thoughtful, if not exactly perfect, sound character.

However, if you’re out for a sub-£200 wireless headphone that sound fun, I’d recommend the Audio Technica ATH-M50X. That pair doesn’t have active noise cancellation or the Skullcany Venue’s clever Tile feature, so there’s still real value here.