What is the Skagen Falster?

The Skagen Falster is a stylish Wear OS watch. If you want advanced techie features such as GPS, clever controls and long battery life, this device isn’t for you.

It does look great, however, and is one of the most comfortable smartwatches available.

In terms of style, the Skagen Falster would be easy to recommend. But following a few days of use, it becomes clear that you’re not quite getting enough for your money – or the effort you put into charging it every day. 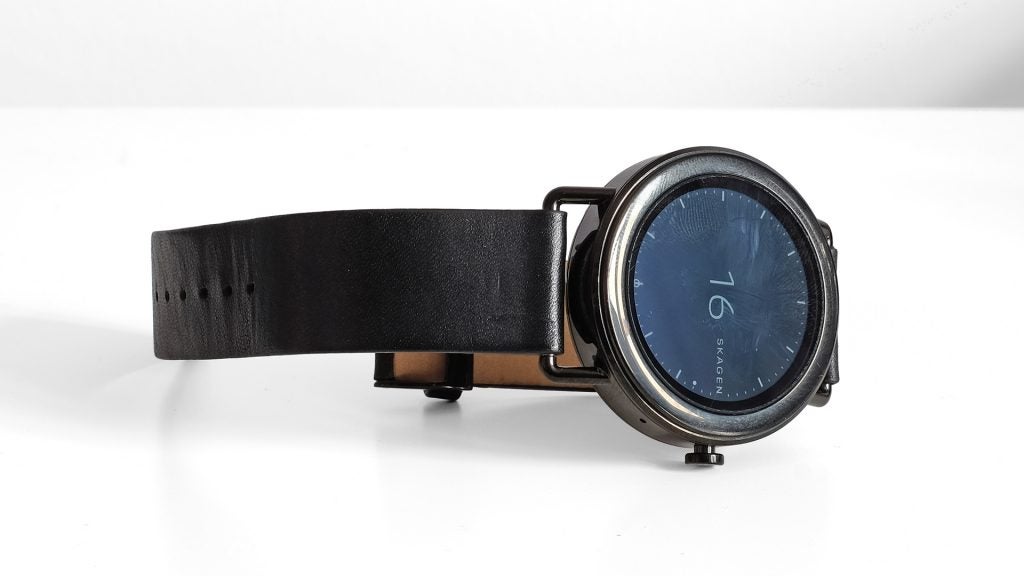 Skagen is a subsidiary of Fossil, and its watches have a less aggressive, perhaps less overtly masculine, look than most of the Fossil-branded devices.

The Skagen Falster’s case is stainless steel, with a just-off-black finish. A recognisable tube of metal pokes out of the face to hold the straps in place. This timepiece has more designer gloss than most Wear OS watches, but it isn’t particularly attention grabbing. 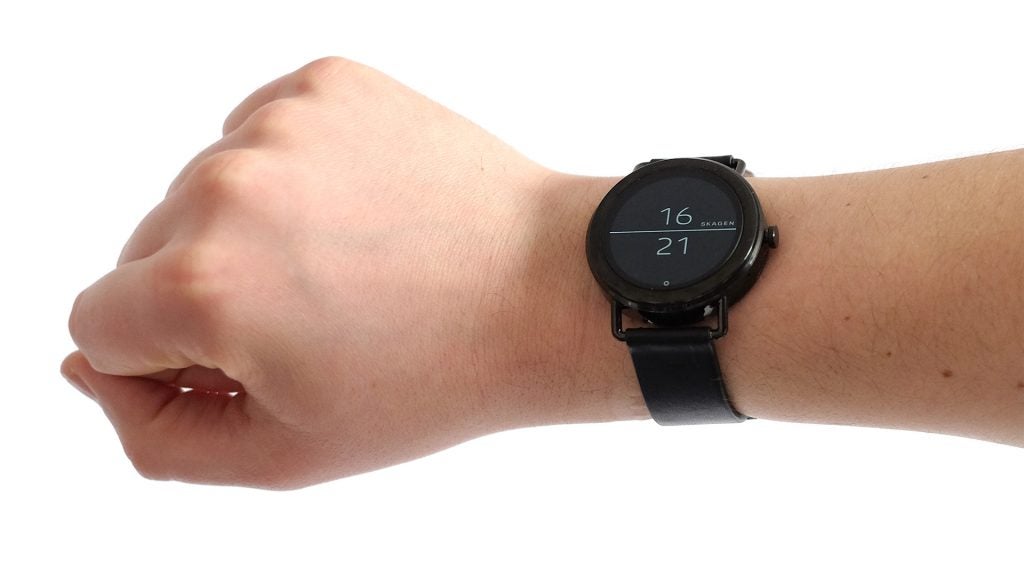 From a tech perspective, the design is a little less impressive. The Falster’s bezel is large, and there’s more border between the start of the display glass and the screen panel itself. There’s 5mm between the screen and the watch’s border – which is far more than what you’d see on the Huawei Watch W1, for example

Does this matter? Well, it depends what you’re after. While it doesn’t spoil the Skagen Falster’s look, the design is less advanced than it may initially appear. 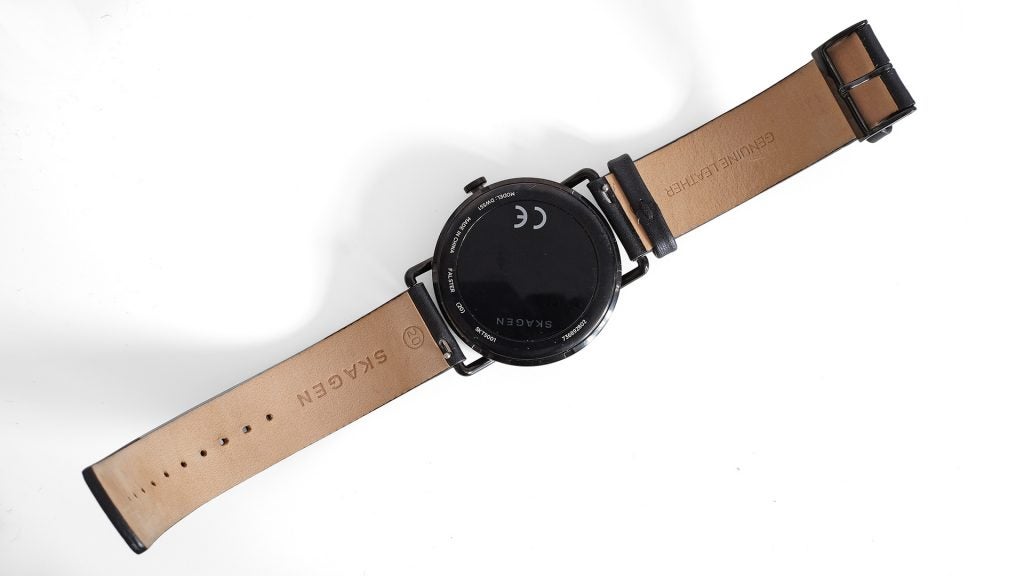 Comfort is great, however. The Skagen Falster comes with a high-quality soft-leather strap that rotates freely around the securing bars. And while you might not guess this from the design, the strap is easy to replace too.

The bar appears to run through the strap, but the central part is actually separate. As such, you can swap out the leather strap for any one of the nylon, silicone and steel mesh straps available – although I can’t imagine any of them are as comfortable as the default leather.

Since the Skagen Falster is lacking a heart rate sensor, there’s no need to wear the device particularly tight around your wrist. 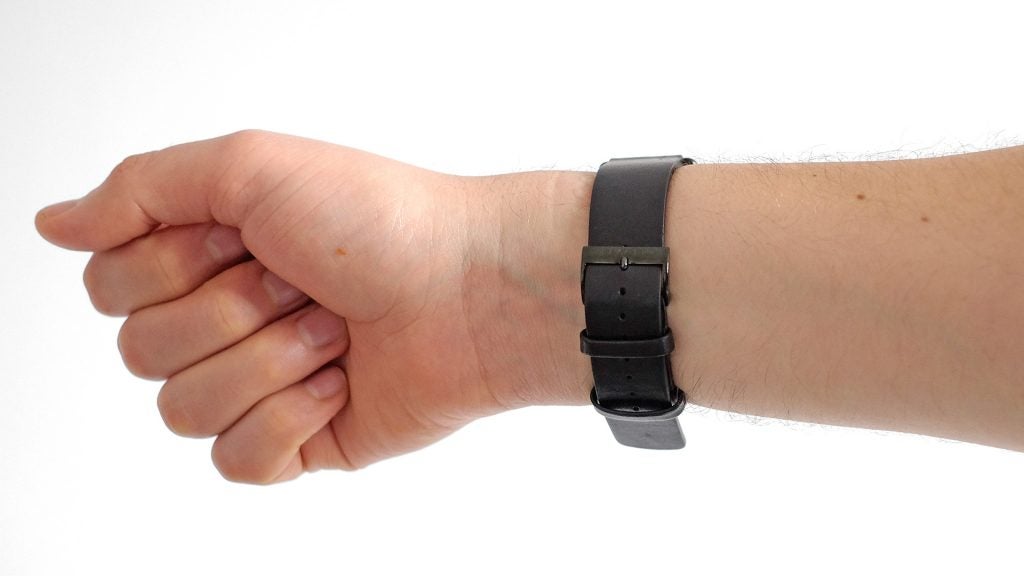 Skagen hasn’t tried anything interesting with the Falster’s operation. It has a touchscreen and a single button on the side.

This button looks and feels like a proper watch crown; it even rotates. However, it has no functionality, which seems a shame. Like the thick-bezel face, there’s no real indication the Falster is a watch of 2018 rather than 2016. 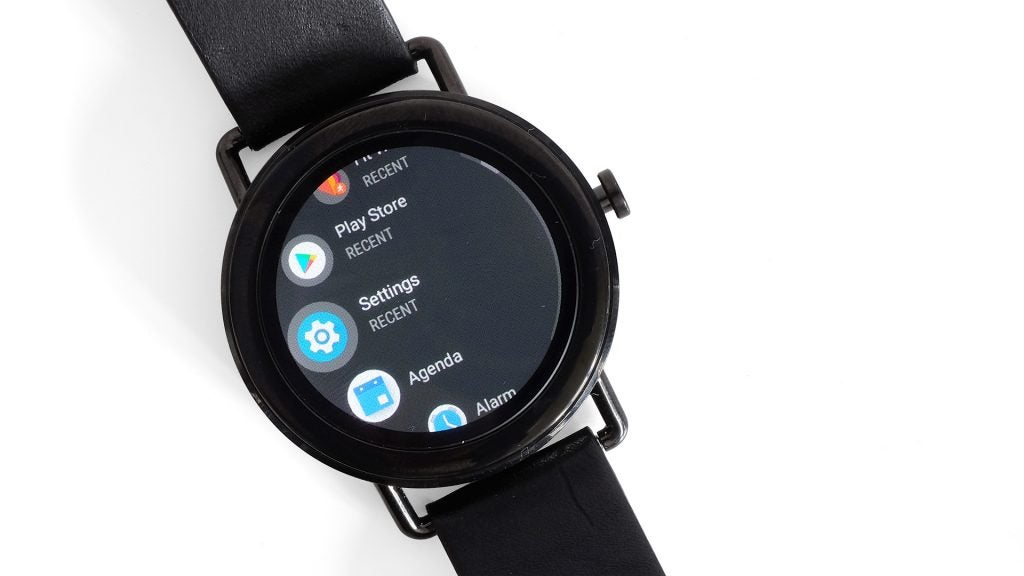 Its screen is fully round, with no design-spoiling cut-outs as seen in earlier Moto watches. The panel is OLED, too, like the Apple Watch’s screen. It’s roughly 1.4 inches across, but there are no details available regarding its resolution. Skagen has even gone as far as to block screenshots in the Wear OS app, to discourage snooping to find out.

Looking up close there is a smidge of OLED fizz, but it won’t be noticeable from a normal distance. The only real criticism I have is that you don’t get one of the top-most benefits of OLED in a watch – that the display should be able to merge with a black surround. Instead, it appears ever-so-slightly blue-ish in a well-lit room.

This is likely because there are slight gaps between the display layers, which reflect just a little light. In a dark room, the Falster screen does have that “perfect black” OLED look, though. 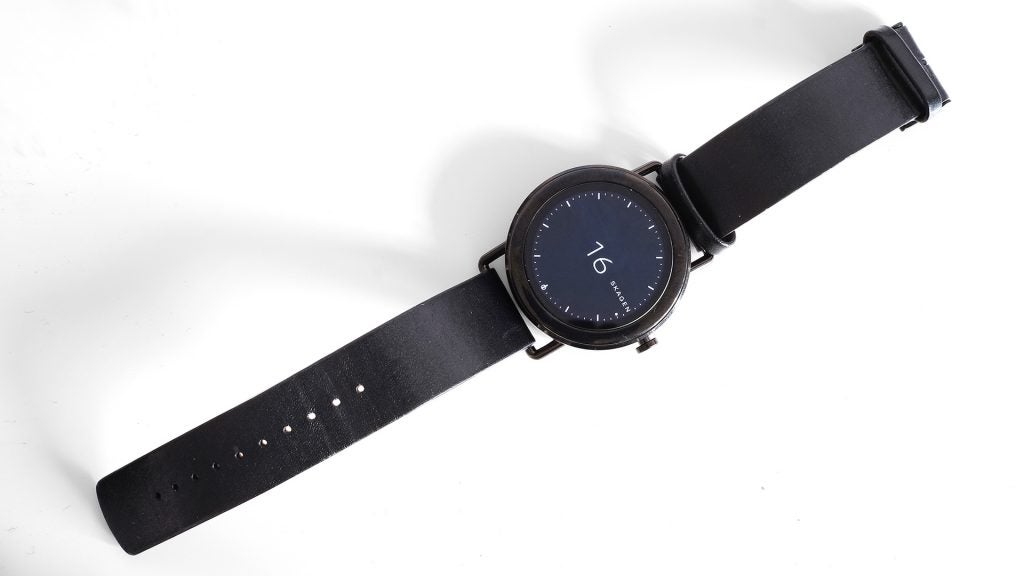 The Skagen Falster runs Wear OS and has no added apps. You get Wear OS more-or-less as it ships, aside from a selection of Skagen clock faces. There’s nothing too bold in this selection.

Skagen doesn’t try to make digital watch faces that look like real diver’s watches, or ones dripping in colour or bold textures. If the watch did have these, they’d seem completely at odds with the hardware design.

Instead, the Falster has spare, mostly monochrome watch faces. There are digital and analogue ones, and a couple that try to fit in almost an unwise amount of information on-screen. 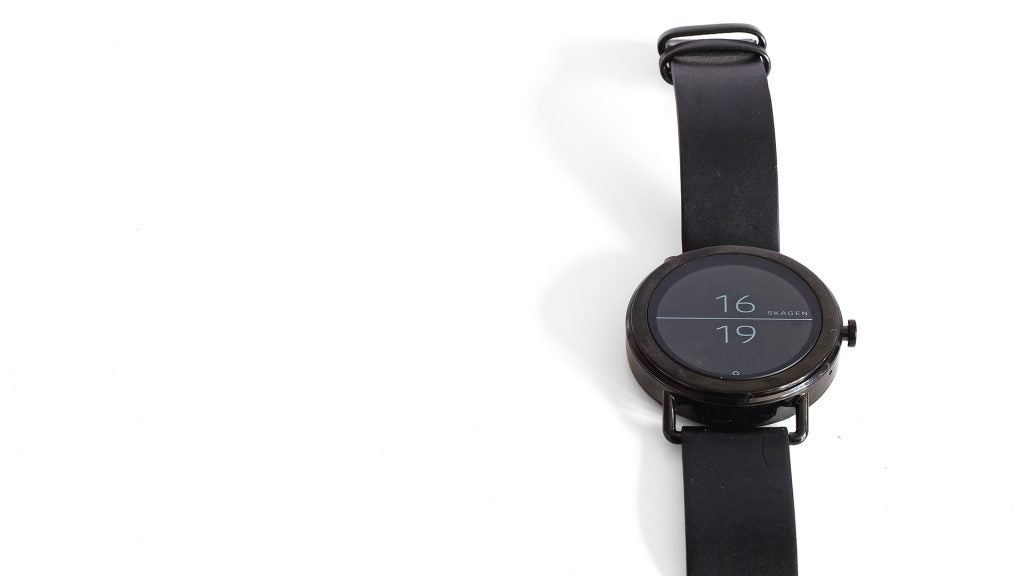 Given the slick hardware, I’m actually slightly disappointed by the clock face designs. None are particularly stylish to my eyes. If I was to continue using the Falster long-term, I’d probably consider getting hold of a third-party face watch. Of course, this is extremely easy to do with a Wear OS watch.

The Falster has a Snapdragon Wear 2100 CPU, present in plenty of Wear watches including the Asus ZenWatch 3, Fossil Q and LG G Watch Style. The software runs just fine.

Wear OS can still feel a little fiddly at times, and doesn’t have the reaction speed of a great phone running Android 8.0, but no smartwatch system is perfect. 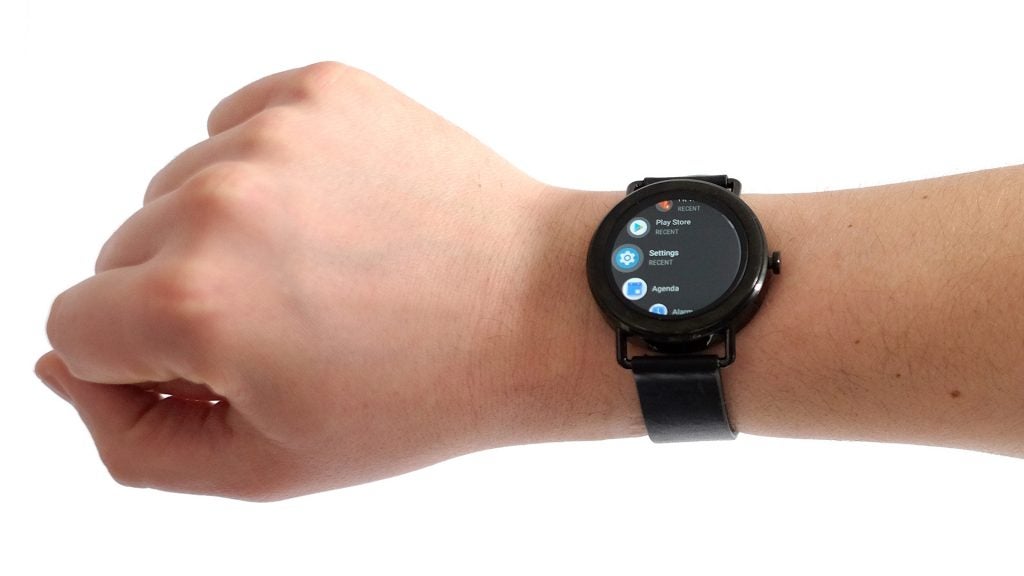 The issue is the Skagen Falster doesn’t make full use of the potential of Android Wear, because it doesn’t have all that many features.

First, there’s no NFC, which enables wireless payments in other watches. There’s no GPS, either, so you can’t track runs, hikes or bike rides without your phone. There isn’t even a heart rate sensor, making the Skagen Falster only as adept as the most basic Fitbit for fitness tracking until you engage an app.

Some Wear apps let your watch act as a second screen for the phone, which will make it seem like a full fitness watch even if your mobile is doing all the work.

A microphone is the one extra that Falster does include, allowing you to use Google Assistant.

Still want to use the Falster for fitness tracking? On its own it relies entirely on the internal accelerometer, meaning it can count steps – but that’s it.

With the help of a third-party app or two you can use it as a rep counter for the gym, or perhaps a yoga guide. The Falster is a poor option for runners or cyclists, but in the gym it fares a little better.

However, those wanting to track how hard they’ve worked will definitely want a heart rate sensor, which is missing here. 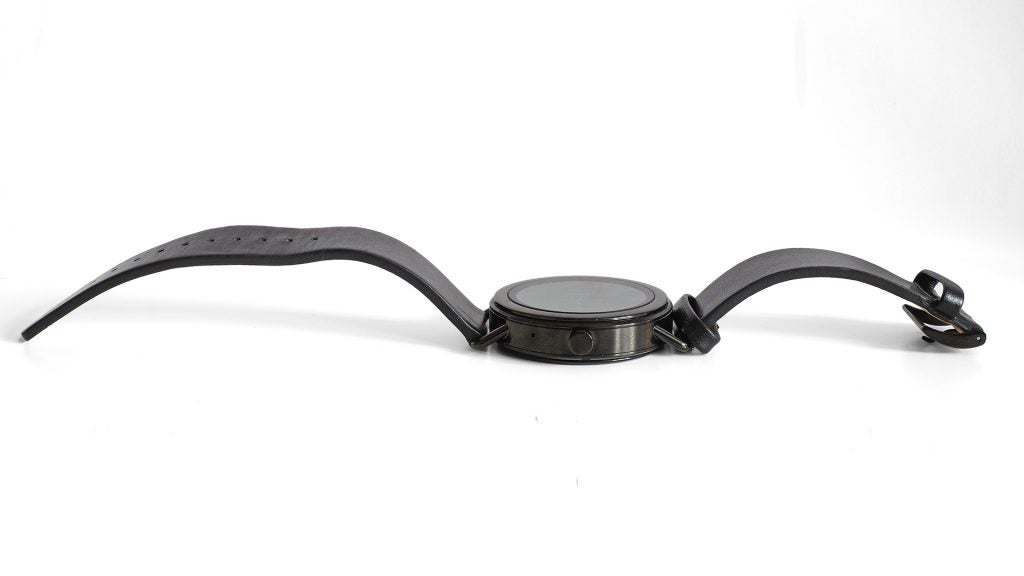 Despite an almost universal lack of advanced features, the Skagen doesn’t last particularly long between charges.

Since it isn’t much use for exercise tracking, I’ve probably used it less than most other Wear watches. Even so, it still only manages a day between charges.

This issue is compounded by slow charging. The Falster takes several hours to recharge. This more-or-less rules it out for sleep tracking, if you want to wear it during the day as your normal watch.

The charger is a wireless pad that transmits charge through the backplate. It’s fiddly to use as well as slow, however. The Falster can slip off it too easily, since the magnetic force that keeps it in place just isn’t strong enough to maintain a fix.

Why buy the Skagen Falster?

A light and comfy, feature-light Wear watch makes sense, but it needs to last a good time between charges. Otherwise, as is the case with the Skagen Falster, you end up feeling as though you’re charging the device more often than you’re actually using it for something.

If you’re after more advanced fitness tracking or a wireless payments device, then we’d suggest you steer clear of the Skagen Falster. The LG G Watch Style is similarly comfortable, but like the Skagen, suffers poor battery life. The Huawei Watch 2 has all the right features, but it doesn’t look as good.

If you’re willing to try a non-Wear OS device then the Fitbit Versa uses its own semi-smart software, lasts around four days between charges and looks cute too. However, it doesn’t have access to as many apps. The search for the perfect smartwatch goes on.

The Skagen Falster looks and feels good, but it’s low on features and stamina.