What is the Asus ZenWatch 3?

First launched way back in September 2016 at IFA, the Asus ZenWatch 3 has only recently reached the UK and certain other territories. It’s the follow-up to the Asus ZenWatch 2 (obviously), a smartwatch that offered decent value but wasn’t exactly the most stylish Android Wear watch out there.

The ZenWatch 2 felt cheap and its rectangular design didn’t do it any favours. Asus’ new Android Wear smartwatch has a far classier design, with more premium materials and a new circular face – a first for Asus. 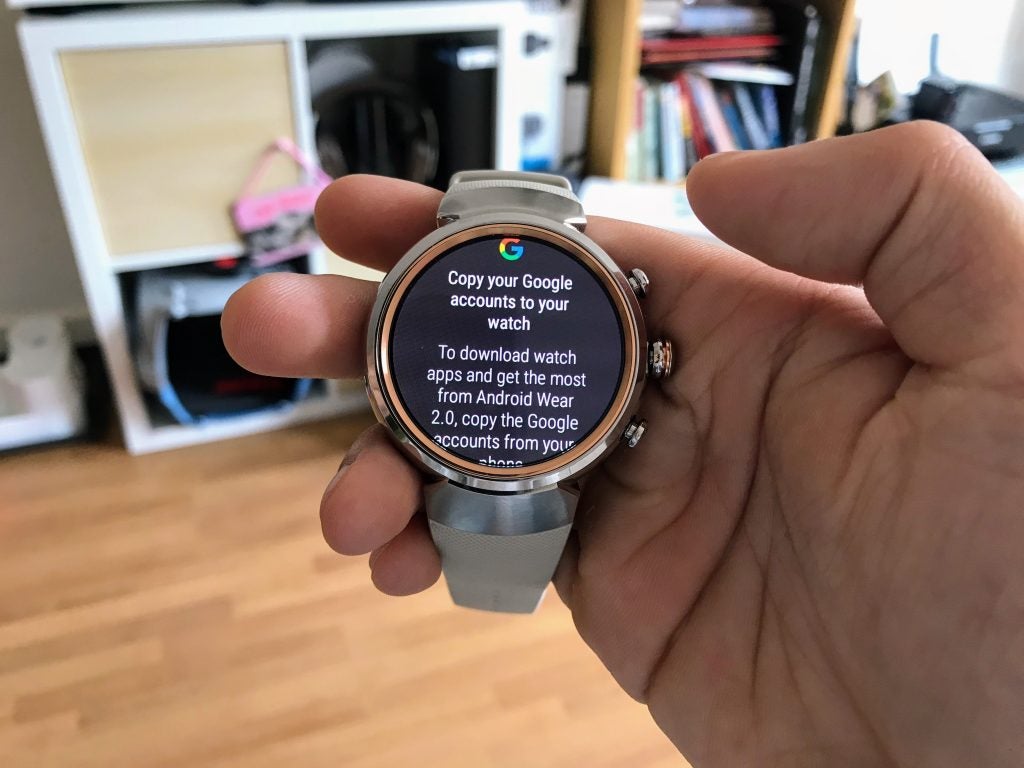 However, in the time between its announcement and subsequent release, the smartwatch landscape has changed. This has been in no small part thanks to the introduction of Android Wear 2.0, which was notably absent at the launch of the ZenWatch 3.

Thankfully, then, Android Wear 2.0 is now available as a software update, bringing some much needed improvements. 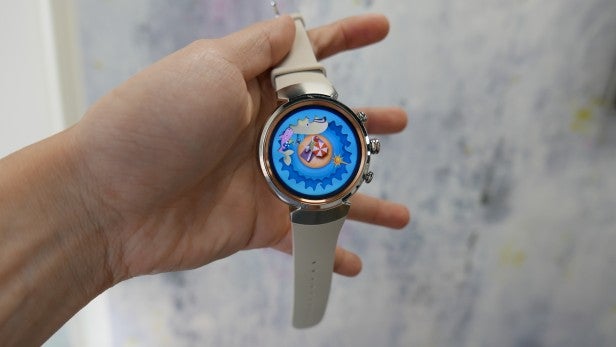 While the ZenWatch 2 was a decidedly rectangular affair, much like many of its rivals of the time, the ZenWatch 3’s looks are already a vast improvement by virtue of being round.

Unlike the Moto 360 there’s no sign of any ‘flat tyre’ screen shape here, which makes it look far slicker and more elegant by comparison. Like Samsung with its Gear S3, Asus has said it’s taken inspiration from classic mechanical watches.

It’s used jewellery-grade 316L stainless steel against a diamond-cut bezel to give a more premium look and feel than that of the ZenWatch 2. You have a choice of gunmetal, silver or rose-gold finishes to the bezel. 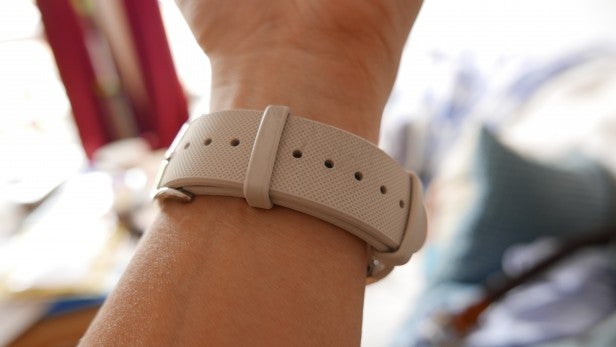 The model I was sent for review had a rubber strap in a cream colour, paired with a rose-gold tint to the casing. I’d say it’s a unisex design, but perhaps erring towards more traditionally feminine tastes, aside from the large watch face.

The slightly textured band was comfortable, but after a week I noticed how mucky it got where I rest my wrist to type away on a laptop. There are also premium stitched Italian leather strap options, which give the ZenWatch 3 more high-end appeal.

At 9.95mm thick with a 45mm face, it’s nowhere near as big and imposing as the Gear S3 or Huawei Watch 2, but it’s still reasonably sizeable.

A first for Android Wear when the ZenWatch 3 initially launched were the three crown buttons along the edge. These are used for navigation and you can also set them as instant shortcuts to apps. 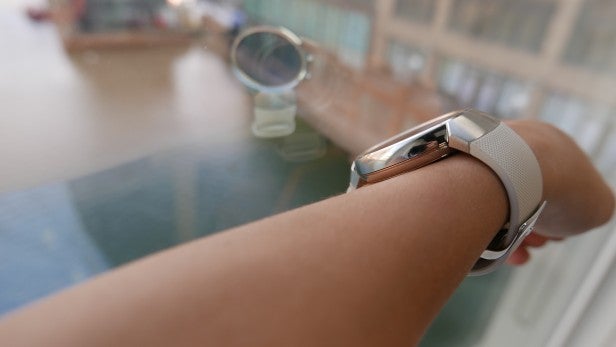 The more time I’ve spent with the ZenWatch 3, the less I’ve come to like those crowns from a visual standpoint. They’re big and a bit garish, looking like they were ripped from a running watch, and at odds with the traditional design of the rest of the watch.

By default the top button is set to open the ZenFit fitness-tracking app, and the bottom button puts the watch into Eco mode, which disables the touchscreen and activates Airplane mode. This button isn’t customisable, which is a little annoying as I did manage to accidentally press it a few times.

As for the display, the ZenWatch 3 uses a 1.39-inch AMOLED with 400 x 400 resolution. It’s as bright and sharp as you’d like. One strange thing I noticed was the glass created a strange visual effect along the edge of the display where its 2.5D Gorilla Glass is ever so slightly curved. You only really notice it if you view the watch angled from the top down. 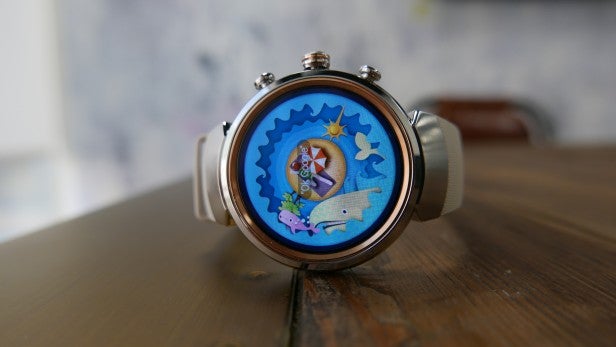 The display is perfectly viewable outdoors and there’s an automatic brightness setting, which is always welcome and works well enough. Android Wear’s usual Brightness Boost is also available, as is manual brightness adjustment. 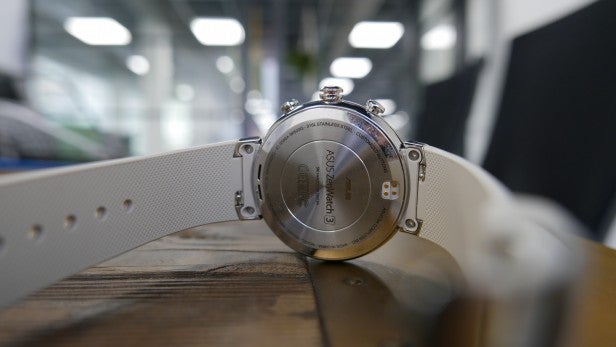 Asus is making some bold claims about its activity tracking via the previously mentioned ZenFit watch app. It claims the ZenWatch 3 can track to 95% accuracy. How it’s come to this figure isn’t really known. With no GPS inside, it relies on its six-axis gyroscope and accelerometer for step counting.

Having worn a ZenWatch 3 on one wrist and a Fitbit Alta HR on the other, the ZenWatch 3 had me as covering 13.35km during a day where I also played some five-a-side football, whereas the Fitbit Alta HR pegged me at 13.1km. In terms of steps counted, there was a difference of about 400, so there’s not a lot to separate them. This gap generally remained consistent, too. 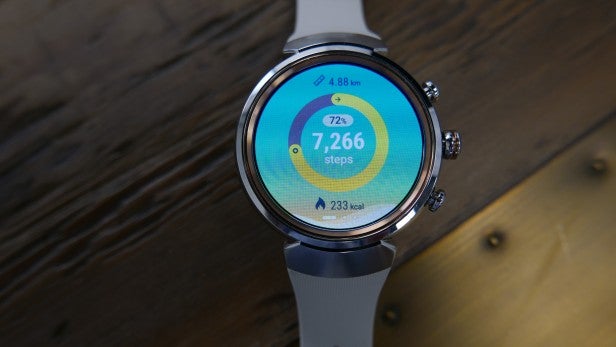 Of course, what does separate them is a lack of a heart rate monitor on the ZenWatch 3, which is a strange omission considering the push towards using ZenFit. This would have fleshed out its health and fitness offering. It’s only IP67 rated, too, so fine for the shower but not something you should swim with.

The ZenFit app can also track push-ups and sit-ups, too. The former I found counted with perfect accuracy, managing to detect every rep I manually counted. With sit-ups I saw a few reps missed, but perhaps that’s a good thing in order to demand perfect repetitions. 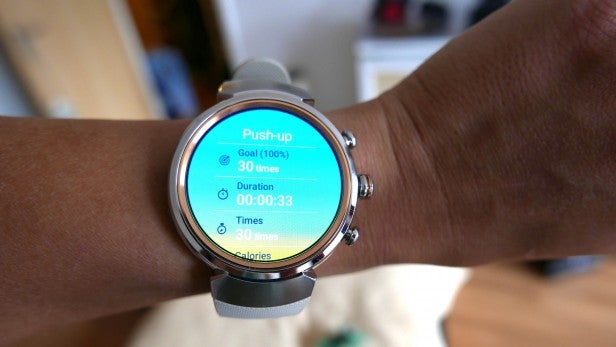 The ZenWatch 3 uses Qualcomm’s new Snapdragon Wear 2100 processor, a chip designed specifically for wearables and promising better battery efficiency. Otherwise there are some standard Android Wear specifications, including 512MB of RAM and 4GB of internal storage.

Performance feels fine, with no real slow-down or long waits for apps to open.

When I first reviewed the ZenWatch 3, my chief complaint was that the ZenWatch 3 still used Android Wear version 1.5, which now feels incredibly dated up against Android Wear 2.0 on the likes of the Huawei Watch 2 or LG Watch Sport.

Considering there was such a delay between the ZenWatch 3 being announced and then finally being released – after Huawei and LG’s efforts – it was difficult to excuse the use of an older OS.

Android Wear 2.0 has now become available as a software update, which brings with it a number of major improvements to the operating system. First off, compatibility with iOS devices is much improved so if you’re an iPhone user the ZenWatch 3 is a more viable option albeit still more limited compared to Android devices. 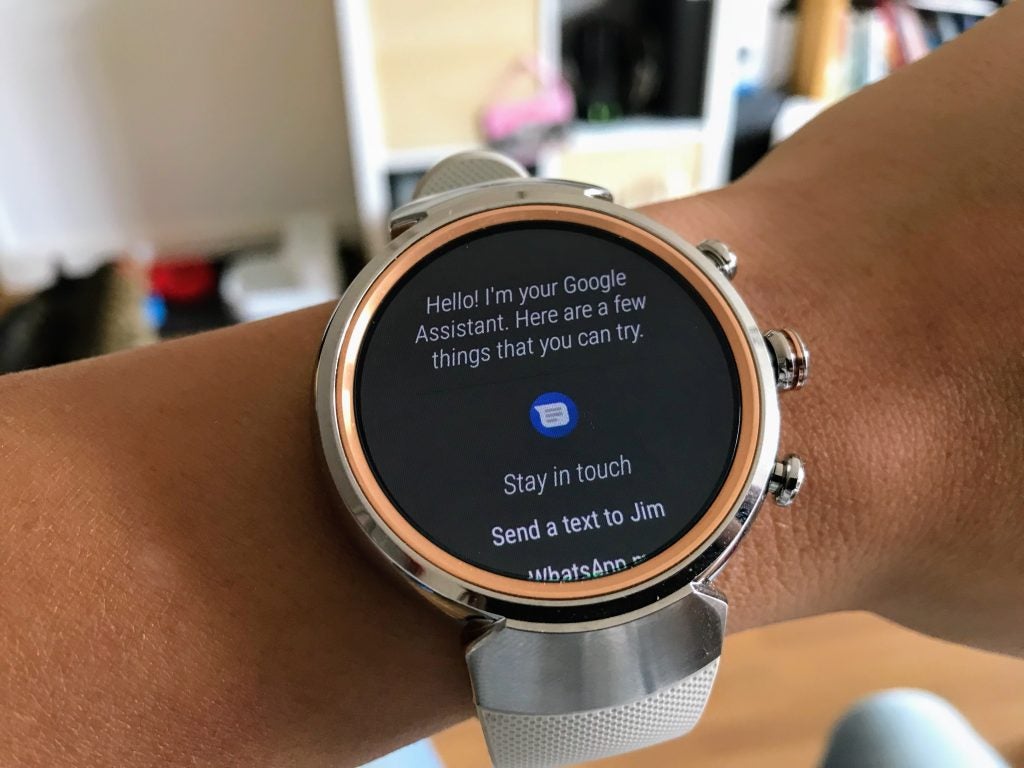 Then there’s Google’s clever Assistant available from your wrist, activated by holding the power button. This lets you use your voice to instruct a digital assistant to answer questions, make phone calls or control your home automation services.

Watch faces have customisable complications, so they have much more dynamic information available at a glance. Then you can also respond to incoming messages through a new on-screen keyboard complete with swipe gestures.

Fundamentals have been improved, including how notifications are displayed on the watch’s screen, making everything much clearer. Having used Android Wear 2.0 on the ZenWatch 3, I’ve found myself liking it much more overall. Frustratingly, though, while the crowns on the watch’s edge do physically rotate, they don’t actually do anything in terms of interacting with the operating system, which is a real shame.

Asus claims you’ll get two days of battery life, courtesy of that Snapdragon Wear 2100 processor and 340mAh battery, and with the always-on display turned off. With the latter turned on, at best I saw the watch last me from 5:30am when I took it off the charger to around midday of the following day.

An average day saw me get to 11pm with about 35% battery left, so definitely needing an overnight charge if I wanted to survive the following day. There is some saving grace in that 15 minutes of charging should be enough to get you to 60% charge capacity. 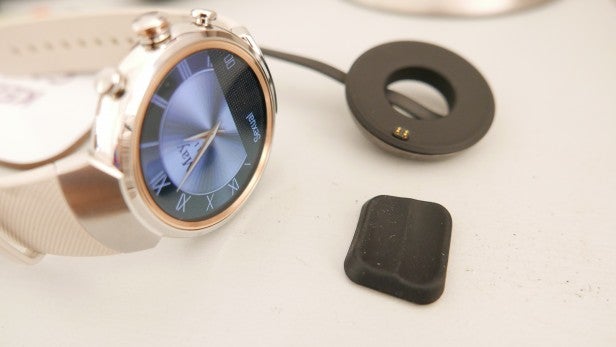 Charging is achieved through a magnetic dock that simply attaches to the back. A rubber foot is included in the box, and this sits below the circular charger and the edge of the watch casing to prop it up. This is an incredibly cheap and tacky approach relative to the magnetic charging stands that you get with many other smartwatches, and something you’ll lose very easily. Without it, the edge of the watch is prone to getting damaged by whatever surface you rest it on, but the solution feels like an afterthought.

Should I buy the Asus ZenWatch 3? 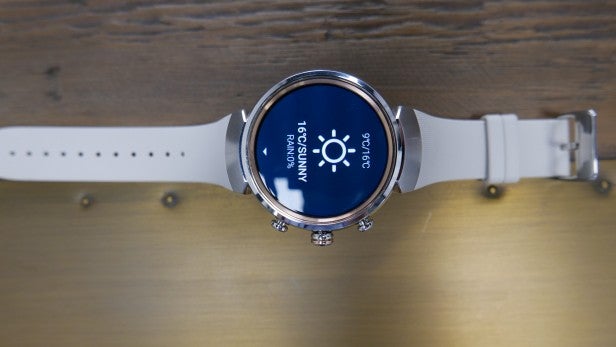 In truth, the Asus ZenWatch 3 doesn’t really do much to stand out from other Android Wear watches but it is much improved now that Android Wear 2.0 has finally arrived.

Still, the display is one of its strongest elements and, provided you like the design, it’s a decent if uninspiring Android Wear smartwatch. As long as you’re not too fussed about the fitness side, that is, since its lack of a heart rate monitor makes it a less compelling prospect.

It’s closest rival today would be the LG Watch Style, which I give the edge in the looks department. The Huawei Watch 2 is also far from perfect and granted costs more, but it does have a HRM and is already upgraded to Android Wear 2.0.

The Asus ZenWatch 3 is an attractive enough smartwatch that has now been upgraded with Android Wear 2.0